The verdict’s in on Trump’s trade war with China

Last Friday was the first anniversary of the signing of the “Phase One” trade deal with Beijing that paused the Trump administration’s trade war with China. Twelve months on, it is obvious that, contrary to Donald Trump’s conviction, trade wars are neither good nor easy to win.

Trump will end his presidency having presided over the three largest US trade deficits in history even as China recorded a record monthly trade surplus in December and, in the midst of a global pandemic, its second-highest annual surplus. 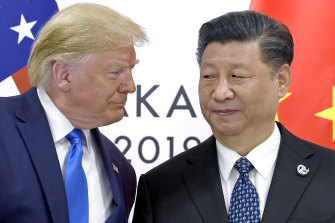 US President Donald Trump with Chinese President Xi Jinping in 2019. The Trump administration’s China policies were probably the most antagonistic of any US presidency since the height of the Cold War in the 1960s. Credit:AP

Trade data released late last week showed China’s overall surplus rose 27 per cent to $US535 billion ($696 billion) in 2020, the highest since 2015. The December surplus, powered by an 18 per cent increase in exports, was a record $US78 billion. The $US317 billion full-year surplus with the US was 7 per cent higher than in 2019.

Earlier this month US trade data showed its overall trade deficit for the first 11 months of the year had grown 13.9 per cent over the same period of 2019, to $US605 billion, with analysts forecasting a deficit of close to $US900 billion for the full year when those numbers are released next month. The US trade deficit in November was the highest in 14 years.

While the deficit with China did shrink in 2019 and through much of last year – perhaps attributable more to the impact of the pandemic on economic activity than Trump’s tariffs – imports from China have been rising sharply recently as the US economy has bounced off its lows.

The overall US trade deficit, however, shows the administration’s focus on the deficit was based on a lack of understanding of global trade. While the trade war impacted trade with China – via both the Trump tariffs and China’s retaliatory duties – it also diverted it to third countries.

The affected imports from China resulted in a surge in imports from other parts of Asia – Vietnam, Malaysia, Thailand, South Korea – and from Mexico as companies in the US and in China rearranged their supply chains to circumvent the tariffs.

Trump thought the tariffs would be paid by China’s exporters and used the “proceeds” from them to compensate US farmers for the impact of China’s retaliation. Last year the administration paid farmers more than $US50 billion, representing more than a third of their income.

On Friday the US-China Business Council, which represents the big US companies with operations in China, said the tariffs had caused the loss of 245,000 US jobs because US companies and consumers, not Chinese exporters, had absorbed their cost.

China has been buying record levels of agricultural products from the US, notably soy beans, but is tracking at only just above 50 per cent of the commitments it made to buy US products.

Under the Phase One deal China promised to increase its purchases of US products by $US200 billion relative to 2018 levels. It can, of course, point to the pandemic as an excuse for falling well short of the target.

The US-China Business Council said the tariffs had caused the loss of 245,000 US jobs because US companies and consumers, not Chinese exporters, had absorbed their cost.

While the deal signed a year ago was regarded as a truce in the trade war it paused only one aspect of the US trade relationship with China.

Subsequently, the Trump administration has opened new fronts in the face-off with its challenger for economic and strategic leadership, launching an assault on China’s technology companies and citing its treatment of Hong Kong and the Uighurs for a raft of sanctions on companies and individuals.

There has been a flurry of new sanctions on Chinse companies in these dying days of the administration, with more than 350 companies and individuals now subject to US sanctions.

The legacies in the relationship with America’s major trading partner that Trump leaves Joe Biden will challenge the new administration.

Biden, who has myriad more pressing domestic issues – more Trump legacies – to resolve, has indicated he will leave the Phase One deal and tariffs in place until the new administration has an opportunity to review them and consult its traditional allies to help develop a more strategic and sophisticated approach to dealing with China.

Any review will conclude that the trade war generated self-inflicted damage to the US without curing China’s exports or adversely impacting its economy and that the chaotic and the nature of the attack on China’s technology sector is ad hoc, crude and lacks a clear framework.

It might also note that the US runs a structural deficit because it issues the world's reserve currency, which allows America to live beyond its means, and that historically the deficit has expanded and contracted in line with the state of the US economy – it expands when domestic growth is strong.

The Biden administration, led by new US Trade Representative and vastly-experienced trade lawyer, Katherine Tai, is going to have to develop a more coherent policy for trade and sanctions.

The new administration needs a more normal trade relationship with China and a more disciplined and strategic approach to the sanctions, along with support from the rest of the West for actions to curb China’s more egregious trade and human rights practices.

Trump’s abandonment of multilateralism for a bilateral approach to dealing with China has been a failure that has damaged the US and its relationships with its traditional allies more than it has harmed or contained China.

The US experience with trade sanctions is perhaps something that China itself could heed. Its assault on Australian exports has resulted in its steel and energy companies paying massive premiums for coal of lesser quality – and has caused blackouts – while also driving imports and the price of LNG (including Australian LNG) to record levels despite the pandemic.

Trump, the self-proclaimed “Tariff Man”, and the China hawks who saw tariffs as a mechanism for containing China’s challenge to the US might beg to differ but the experience of the trade war on China has confirmed that, even with the “benefit" of a lop-sided trade deal negotiated with the benefit of duress, no one wins from trade wars.

Start the day with major stories, exclusive coverage and expert opinion from our leading business journalists delivered to your inbox. Sign up here.

The Drew Brees retirement secret is out: ‘This is it’