Uvalde: For years, even as mass shootings swept the country, Richard Small bristled at any talk of tighter gun restrictions, viewing it as nothing more than politically driven finger-pointing that would do little to stop the violence while infringing on his rights as a gun owner.

But then, the 68-year-old retired high school history teacher saw a photo of one of the young victims of Tuesday’s shooting at Robb Elementary School in Uvalde, a pleasant little town that he’d visited frequently when he coached youth football.

“He looked like my grandson. I mean, they could have been twins. They have the same face,” Small said, his voice shaking with emotion. “It just stirred something in me.” 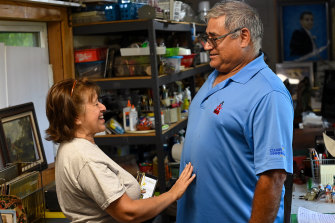 Richard Small with his wife, retired teacher Marina Small, after he turned over his AR-15.Credit:Joshua Lott/Washington Post

After the massacre, Small and his wife, Marina, drove nearly 90 minutes from their ranch in Charlotte, a tiny town south of San Antonio, to pay their respects in Uvalde. He stood on the edge of the city’s town square where 21 crosses, for the 19 fourth-graders and two teachers killed in the shooting, have become the epicentre of the city’s anguish. Somehow tears didn’t feel enough.

On Saturday night, Small, a self-described “devout NRA Republican,” did what he acknowledges would have been unthinkable days earlier. He unlocked his gun cabinet and pulled out his AR-15, similar to the one used by the gunman in Uvalde. He drove to his local police department and turned it in.

“I’m a gun advocate. I believe in the Second Amendment. But this AR, after what I saw in Uvalde, I’m done with it,” Small said as he turned the rifle over to an officer with the Charlotte police department. “I’m sick over it.” 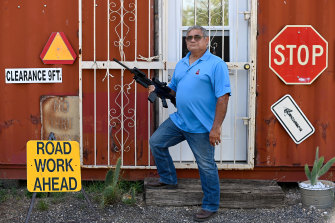 Richard Small poses for a portrait with his AR-15 before turning it over to police.Credit:Washington Post/Joshua Lott

Guns have long been an inextricable part of Texas culture – tightly woven into small towns like Uvalde, a predominantly Latino community of about 16,000 about an hour north of the US border with Mexico.

Here, children are raised to hunt and shoot from a young age, and many residents – including family members of the victims – say they own guns for their own protection. It is an affinity that cuts across the partisan lines that typically define the gun debate in other parts of the country.

But now, as in other communities that have been shattered by gun violence, Uvalde is facing painful questions beyond heartbreak over the dead and growing anger about the police response: about the proliferation of guns and the permissive state laws that allowed the 18-year-old gunman to legally buy the assault-style rifle used in the attack. 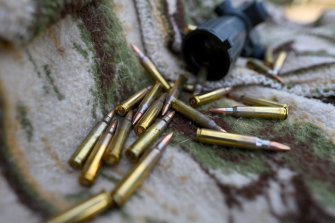 Richard Small unloaded the clip to his AR-15 outside of his home in Charlotte, Texas.Credit:Washington Post/Joshua Lott

That unfolding debate has even affected some of the families of victims. Outside a memorial service Saturday at Sacred Heart Catholic Church, where many of the funerals are scheduled to be held in coming days, a woman whose niece was killed in the attack questioned how a gunman not yet old enough to buy beer in Texas could have purchased two semiautomatic rifles and a massive quantity of ammunition – without raising concern.

She declined to be quoted by name out of respect for her family, which had asked relatives not to speak about “political issues” to the media.

“Why do you even need guns like that?” the woman asked.

But others were wary of seeing what happened in Uvalde turn into a fight over guns.

As she sat at the memorial for the victims last week, Amanda Flores said she knew all 21 victims of the rampage, but still does not believe that the tragedy should turn into a debate over gun ownership. Flores, 43, said she and her family members own firearms and view them as essential tools to keep their family safe in “a border town.”

“With all of the problems we have right now with the immigrants crossing over, you don’t know how many fast-speed chases go through here … we need them for our protection,” said Flores, whose grandson was at Robb Elementary when the shooting began but escaped uninjured. “All of them coming in, they are coming in as illegals, they can have guns. And what are we supposed to do? Throw rocks at them?”

Still, Flores said she increasingly believes even hardcore gun owners should be willing to accept some new gun-control measures. “I don’t believe in the young kids having easy access to these guns and not being mentally stable,” Flores said.

That sentiment has not been shared by Texas leaders. At a news conference in Uvalde on Friday, Texas Governor Greg Abbott, a Republican, brushed aside the idea of supporting expanded background checks for firearms purchases.

“Look at what happened in the Santa Fe shooting,” Abbott said, referring an attack at a high school south of Houston in 2018 in which eight students and two teachers were slain. 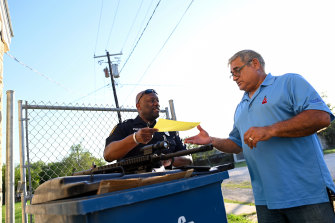 Abbott also reiterated his opposition to proposals to raise the legal age for purchasing a semiautomatic rifle from 18 to 21, harking to a time before the advent of rapid-firing weapons. “Ever since Texas has been a state, an 18-year-old has had the ability to buy a long gun, a rifle, and since that time, it seemed that it has only been in the past decade or two that we have had school shootings,” Abbott said. “So, for a century and a half, 18-year-olds could buy rifles and we didn’t have school shootings, but we do now.”

Abbott’s comments in Uvalde drew outrage from state Senator Roland Gutierrez, a Democrat whose district stretches from San Antonio to Uvalde. Gutierrez stood up and began shouting at the governor, urging him to convene a special session to address gun violence.

Gutierrez later mocked Abbott’s suggestion that firearms today are comparable to the weapons that were in circulation when Texas became a state in 1845.

“This isn’t the time when we are out killing squirrels anymore,” Gutierrez said. “Times and technology have changed. These kids are buying AR-15s. … If [Abbott] wanted to show any fortitude whatsoever, change the age to 21 [or] 24.”

Outside Robb Elementary, where he was trying to catch a glimpse of President Joe Biden on Sunday, Edgar Sanchez said his daughter was a fourth-grader at the school but left early that day, a decision that might have saved her life but has left her traumatised. Sanchez said he hopes Biden pushes for tougher gun-control measures – even if that means giving up his own AR-15.

“Honestly, I have one,” Sanchez said, explaining that he had purchased the weapon to keep himself and his family safe. “If they told me the kids would be safer if I got rid of it, I would. … I’ve never shot that assault rifle.”

In a town that many residents have described as “heavily armed” and in a state where it is common to see guns openly worn, many appeared to have left their weapons at home in recent days – visiting unarmed the makeshift memorials and attending church services that have popped up across town to honour the dead. That was a contrast to the aftermath of the 2017 attack in Sutherland Springs, when men carrying rifles showed up to the scene to push back on talk of gun-control measures.

Outside Oasis Outback, the sporting goods store where law enforcement officials say the gunman purchased his weapons, customers making their way through a packed parking lot Saturday were reluctant to speak about what had happened in Uvalde and the debate on gun control.

“We shouldn’t be talking about politics at a time like this,” a woman said, as she waved off a reporter.

A week ago, Richard Small admits, he would have said the same thing. A nearly lifelong member of the NRA who has collected guns since he was in his 20s, Small said he has always been a strong supporter of gun rights and still is. But the shooting in Uvalde affected him in a way that the other school massacres like Columbine and Sandy Hook had not, even though he was still teaching when those shootings happened.

As he visited the memorials in Uvalde, Small said, he thought of his gun cabinet at home, and one of the weapons in it. Small said he bought the rifle at least 15 years ago but had barely fired it. “I don’t even think I’ve used a full box of ammunition with it,” Small said. Along the back of his gun, he remembered, there was a label. “Law enforcement use only,” it read.

Small recalled how, under the tighter gun ownership rules of the past, he had had to fill out extensive paperwork to buy the weapon and go through checks – “much more than this 18-year-old kid did.”

Even now, Small said, he would never support a ban on guns – as he fears some Democrats might want. But he said Republicans like Abbott should embrace some new regulations that would require training for and make it tougher to buy highly destructive weapons.

“This is enough,” Small said. “We’ve got to control this thing. I’m not ever going to say, ‘All guns need to be picked up or all that.’ But the regulations need some serious work. And I just wish that Democrats and Republicans could find some sort of middle ground here. … Because I’m just so tired of it.”

Below Deck Sailing Yacht fans slam crew member’s demands ‘What is wrong with her?’
World News