Home » World News » The Sword of Damocles hung over May 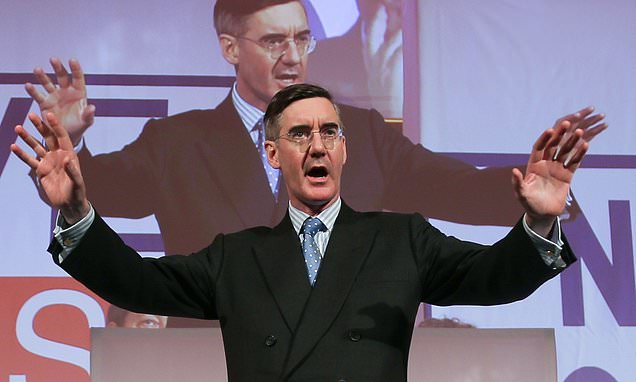 The Sword of Damocles hung over May

DAN HODGES: The Sword of Damocles hung over May… then Rees-Mogg stuck it in his own foot

It had all been planned with military precision. The plotters leaving the ‘Kill-Zone’ – the nickname for the campaign headquarters that had been established in Iain Duncan Smith’s plush office on Parliament’s Upper Committee corridor – were to depart at two-minute intervals to avoid attracting suspicion.

But as Boris Johnson, Dominic Raab, Jacob Rees-Mogg, Owen Patterson, Priti Patel and Steve Baker snuck out, they ran straight into a group of Tory MPs who were congregating outside a nearby meeting room.

‘Someone shouted to Canzini, “Whose campaign are you running now?” But he just looked sheepish and scuttled off,’ an MP told me.

Meticulously prepared and shambolically executed. That’s how historians will record the 2018 Christmas Coup. ‘The whole thing’s been a catastrophe,’ one Minister lamented.

‘May’s been mortally wounded but is going to stagger on like she always does. There’s no way of removing her for another year. And we’re no closer to finding any solution on how to move forward with her deal.’ 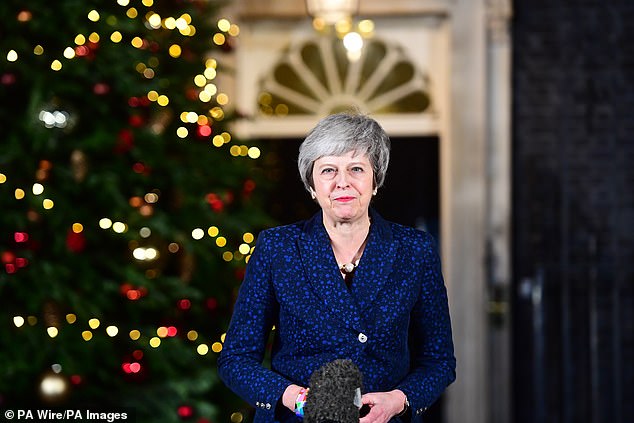 Theresa May’s Downing Street operation has had its critics but they saw the ERG coming a mile off, and had made preparations

The debacle that attended their initial attempt to secure the 48 names to trigger a leadership challenge should have served as a warning. But the ERG assassins have become drunk on their own failure.

As one No10 official explained, ‘it’s not about Brexit for them any more. It’s become personal. They just want to get her out regardless’.

Now, thanks to efforts that would make the Keystone Cops look models of efficiency, they can’t.

The Sword of Damocles that had been dangling over the PM, and which even Cabinet loyalists conceded might have to be wielded if she could not find a way of breaking the Chequers impasse, is now protruding firmly from Jacob Rees-Mogg’s own foot.

‘They’re out of their depth,’ one furious Brexiteer raged. ‘They think they’re still kids playing with their plastic army men.’

Theresa May’s Downing Street operation has had its critics but they saw the ERG coming a mile off, and had made preparations.

Two weeks ago the Tory whips office and key May advisers began detailed ‘war-gaming’ for the confidence vote. 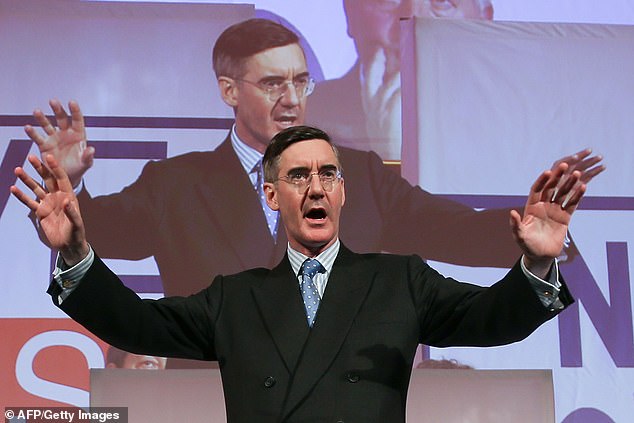 Meticulously prepared and shambolically executed. That’s how historians will record the 2018 Christmas Coup.

A spreadsheet was collated, dividing every Tory MP into three groups – red for likely opponents, amber for waiverers and green for loyalists. Ministers, whips and No10 aides were tasked with contacting MPs with whom they had worked.

The early warning No10 required to put their counter-strike into motion came – inevitably – from their opponents.

As Graham Brady began the process of confirming the receipt of letters with their signatories, ERG members started boasting to colleagues that May was finished.

Another blunder was the decision to submit the final letters on a Tuesday, giving May’s team the option of going for a rapid contest.

As the PM flew back from Brussels, her main advisers were huddled with her husband Philip to plan their strategy.

Unusually for a No10 spouse, Mr May played a significant role in masterminding her response, taking the lead in suggesting she address the 1922 Committee, and urging a vote at the earliest opportunity.

‘We had a show of hands on whether to have a Wednesday vote, and it was unanimous,’ said someone who attended.

As the Prime Minister began the process of sitting down with MPs to fight for her political life, it became obvious a big concern was whether she would lead her party into the next Election. 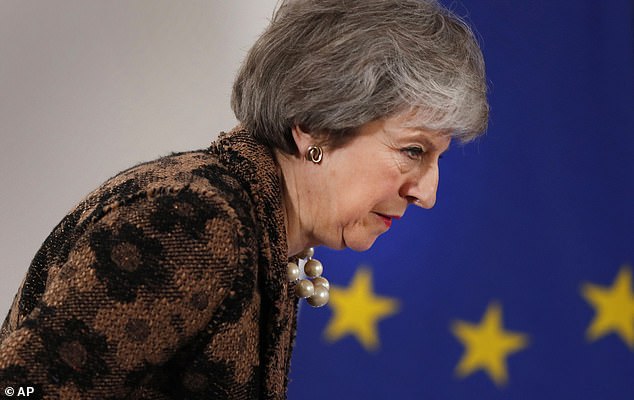 Unusually for a No10 spouse, Mr May played a significant role in masterminding her response, taking the lead in suggesting she address the 1922 Committee, and urging a vote at the earliest opportunity

‘One thing she doesn’t want is the perception that she’s “done a Cameron” and walked off leaving the country in the lurch,’ said a Minister.

‘But as Wednesday morning wore on it became clear the Election issue was a deal-breaker. So that’s when she decided to make the statement she wouldn’t go on and on.’

It was that pledge, coupled with the incompetence of her adversaries, that saved her. Once the result was confirmed, she walked out of No10 to deliver a victory statement, asking staff ‘save some crisps for me’.

The PM’s argument has been that, if her deal is rejected, there are only two alternatives – No Deal or No Brexit.

In response, former Ministers such as Boris Johnson and Dominic Raab have attempted to argue there is a third option – ditch her, put a ‘proper Brexiteer’ in charge and watch the brittle Eurocrats capitulate to some John Bull-style diplomacy. 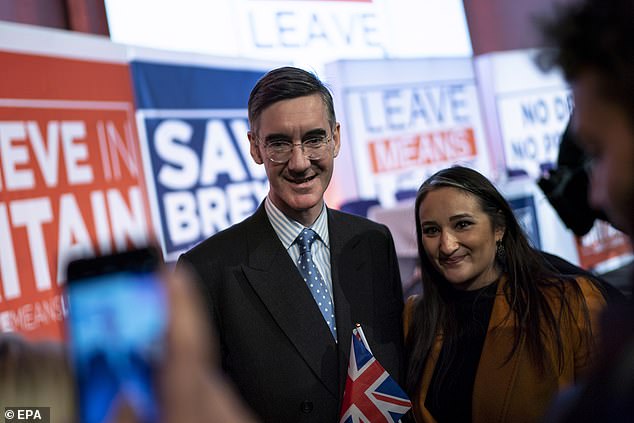 The EU has made it clear that even if there was, they would not entertain the idea of renegotiating the deal

The events of last week have shown that argument is for the birds. There is now no mechanism for forcing the Prime Minister’s departure.

The EU has made it clear that even if there was, they would not entertain the idea of renegotiating the deal. And even if they were minded to renegotiate, the last people in Europe they would hand meaningful concessions too are the Tory Eurosceptics.

In fact, the ERG’s blundering has narrowed the options even further. As one moderate Tory MP told me, ‘now their only move is to go for No Deal.

But if they defeat her in the meaningful vote and push for that, they’re facing a second referendum on a cross-party basis. And they won’t like that one bit’.

A No10 source reaffirmed Mrs May’s implacable opposition to a second referendum. But they conceded that, if her deal is defeated, the Commons would view such a referendum as ‘a viable option’.

Some of the more pragmatic rebels are still hoping and working for other solutions. One group is urging Cabinet intervention. Others are calling for Ministers to ‘go full-throttle with the No Deal preparations. We need to throw money hand over fist to make No Deal work’.

But less pragmatic solutions are also being contemplated. Aware of the opposition to No Deal that exists in parliament, some Brexiteers have been discussing the use of the Civil Contingencies Act to bulldoze a path past the Commons.

This is where we are thanks to this week’s efforts from Jacob Rees-Mogg’s child-soldiers. With a wounded PM being openly mocked and taunted by Europe’s lounge-lizard Jean-Claude Juncker.

With a second referendum threatening the fracture of the Conservative Party and the country. And with British MPs contemplating the use of wartime plenipotentiary powers to force a No Deal Brexit on to the British people.

Theresa May might have been the target. But now the entire country is trapped in the ERG’s Kill-Zone.