Home » World News » The only charges in the Breonna Taylor case are for shooting into her neighbor’s apartment, not for killing her

The only charges in the Breonna Taylor case are for shooting into her neighbor’s apartment, not for killing her 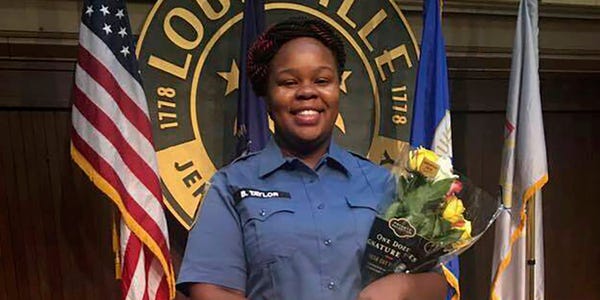 A grand jury in Louisville, Kentucky, on Wednesday, charged former police officer Brett Hankison with three counts of "wanton endangerment" for his actions in the incident that led to Breonna Taylor's death.

The 26-year-old was killed when police shot her eight times in her own Louisville home during a botched drug raid. The two other Louisville Metro Police Department officers involved in the March 13 incident were not charged by the grand jury.

Hankison's indictment and the three charges do not appear to be directly related to Taylor's death, as the Louisville Courier-Journal first reported.

The charges, read by Judge Annie O'Connell, say that Hankison "wantonly shot a gun" into a neighboring apartment. The charges include the initials of the people living in the apartment.

Absent among them are Taylor's initials, "BT," which indicates that Hankison had been charged with "wantonly" firing his weapon into the neighboring apartment, but not for killing Taylor in her own.

In the state of Kentucky, "a person is guilty of wanton endangerment in the first degree when, under circumstances manifesting extreme indifference to the value of human life, he wantonly engages in conduct which creates a substantial danger of death or serious physical injury to another person," according to the 1975 state statute.

The felony charge carries a maximum sentence of five years in prison and a fine of $10,000.

The jury had the option of indicting any of the three officers on homicide, according to the Courier-Journal. It declined Wednesday to file any charges against the two other involved officers, Sgt. Jonathan Mattingly and detective Myles Cosgrove, both of whom are currently on administrative leave.

Immediately following the grand jury's incitement, hundreds of people took to Louisville streets to protest the decision, according to reports on social media.

Who are the experts on The Repair Shop? From Will Kirk to Suzie Fletcher
World News