The Lionel Messi-Cristiano Ronaldo rivalry comes to an absurd conclusion 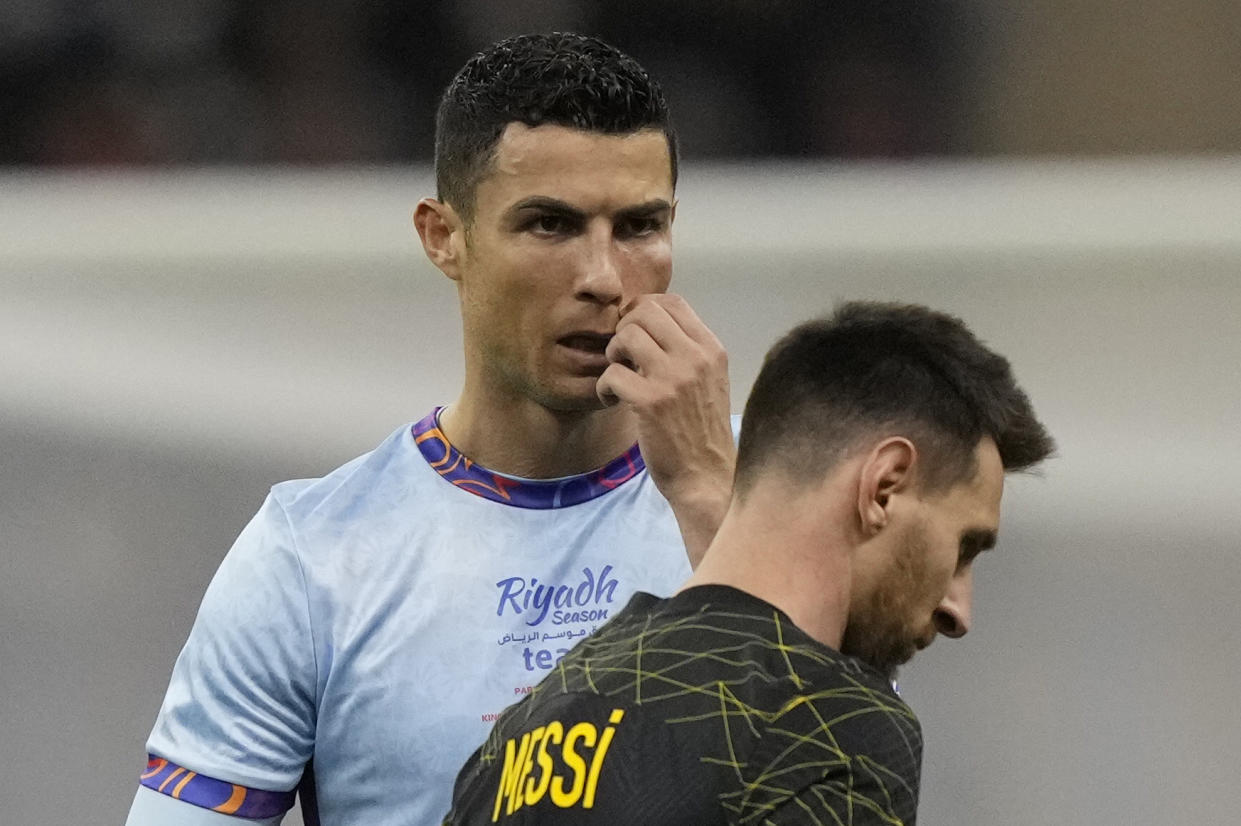 The greatest individual rivalry in soccer’s storied history came to a likely conclusion Thursday in the most absurd of circumstances: a lucrative mid-season exhibition match in sportswashed Saudi Arabia.

It was Cristiano Ronaldo versus Lionel Messi, Chapter 37, and it was eventful, perhaps even fun — but the most preposterous part was simply that it happened.

It was emblematic of modern soccer that Messi, the greatest player ever, fresh off climbing to the top of the world, would be forced to fly to one petrostate that owns his club, then to another that has purchased him as an "ambassador." It was fitting that Ronaldo, whose petulance and decline led to a divorce with Manchester United, would be there waiting.

Ronaldo signed with Al-Nassr last month on the richest contract in sports history. Before he'd even played for the Saudi club, he was named captain of an All-Star team comprising exclusively of players from the Saudi Pro League's two fiercest rivals. The captaincy was granted to him by one of Crown Prince Mohammed bin Salman's henchmen, Turki al-Sheikh, who, thanks to his limitless wealth, counts dozens of soccer superstars, including Messi, as his acquaintances.

The All-Star team's opponent, meanwhile, was PSG because the Qatari-owned French club had reportedly been paid some $10 million to be there. The superclub's unquenchable thirst for revenue, which allows it to comply with spending regulations, compelled it to sign this contract to play a friendly at Saudi Arabia's state-sponsored entertainment and sports festival, Riyadh Season, last January.

That game was postponed due to COVID-19 restrictions, and kicked back to this year — when calendars were already slammed and players are already overworked and there really shouldn't have been room for it.

But the Saudis had paid for it, so there it was.

“The agreement was made last season and the club has to respect it,” said PSG head coach Christophe Galtier, who didn't sound particularly happy about it. “Is it well-timed? We had to respect the commitment that was made. I abide by that commitment.”

So the players, after losing to Rennes on Sunday and slipping to within 3 points of second-place Lens in the Ligue 1 title race, boarded a flight to Qatar. They stayed a couple days to fulfill sponsor obligations and parade around an open training session at the Khalifa Stadium in Doha. Then they flew to Riyadh, where they were greeted with flowers and song, on Thursday morning for the game that night. They'll then fly back to Paris, and contest a French cup game on Monday.

But first, the show. (If you wanted to see it in the U.S., you could pay $3.99 to watch on YouTube. But illegal streams were, of course, plentiful.)

Messi scored inside three minutes. PSG, for most of the first 60, ran circles around the makeshift All-Star defense whenever they pleased.

But then PSG keeper Keylor Navas flailed at a cross, and instead punched Ronaldo in the face. The ref awarded a penalty. Ronaldo converted.

He played the rest of his hour-long appearance with a red wound protruding from his left cheekbone, but no matter — Saudi VIPs pumped their fists in the King Fahd Stadium's luxury boxes. (One fan had paid the Saudi government roughly $2.6 million for an all-access ticket.)

PSG went down to 10 men late in the first half, then scored a few minutes later. A few minutes after that, Neymar casually missed a penalty. Then, Ronaldo equalized after Sergio Ramos whiffed a clearance. The absurdity had yielded a delightful back-and-forth match — albeit one that didn't mean anything.

PSG went ahead 3-2 not long after halftime. The Saudi team equalized soon thereafter, on a simple header from 31-year-old Korean defender Jang Hyun-soo.

Then Messi won a penalty that Kylian Mbappé converted, at which point Galtier substituted his stars, and exhaled in relief that none had gotten injured.

PSG ultimately won 5-4. Ronaldo was named man of the match in a losing effort. Messi and Neymar chatted and joked off to the side as a full-stadium light show punctuated the occasion. Marquinhos lifted a trophy, and a ridiculously excessive stream of flames and fireworks soared into the night sky.

And thus, in all likelihood, concluded a remarkable dual-hegemonic era, about which entire books have already been written. Messi, clearly, came out the victor, with more wins, goals and assists than Ronaldo in their head-to-head matchups.

Ronaldo had dreamed, in his explosive November interview with Piers Morgan, of deciding the rivalry once and for all in a World Cup final. Instead, he departed Qatar 2022 in tears as Messi became king. And this alternate finale, it's fair to say, was quite a bit different. 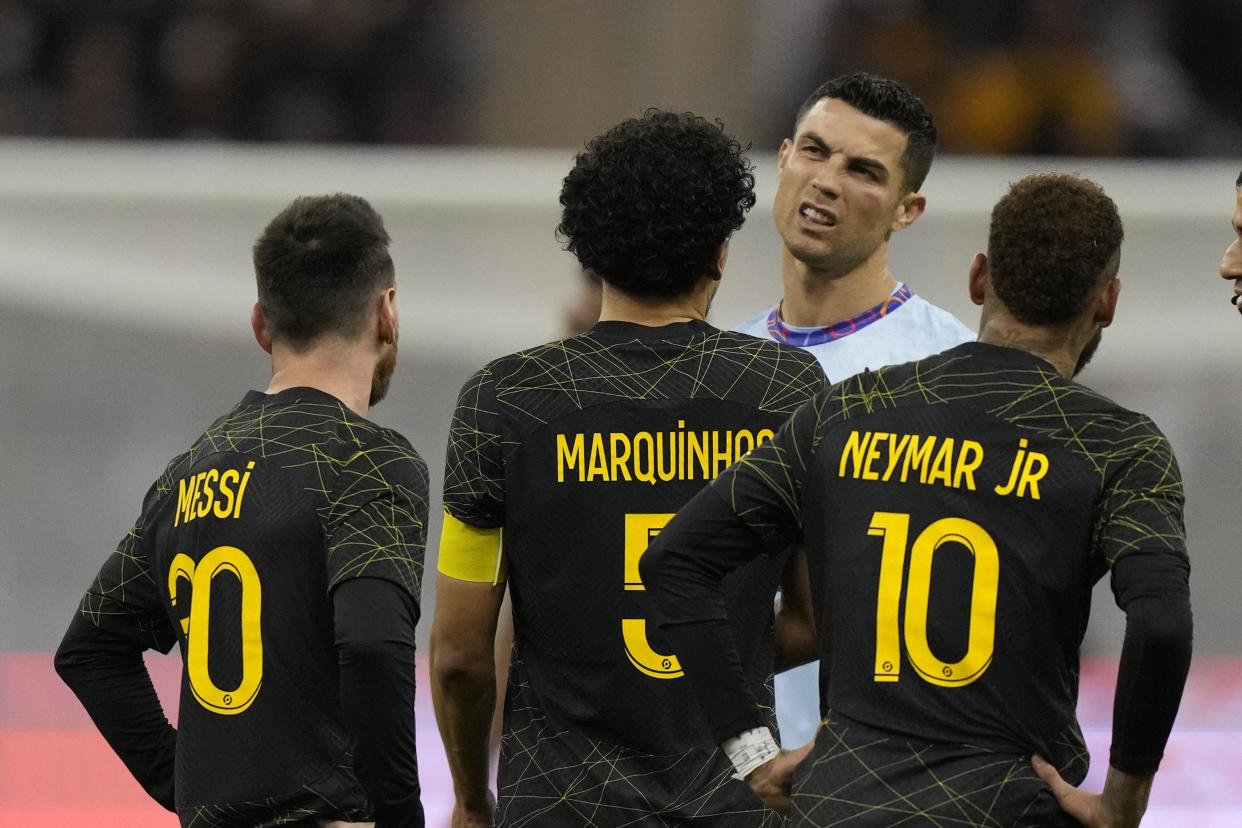