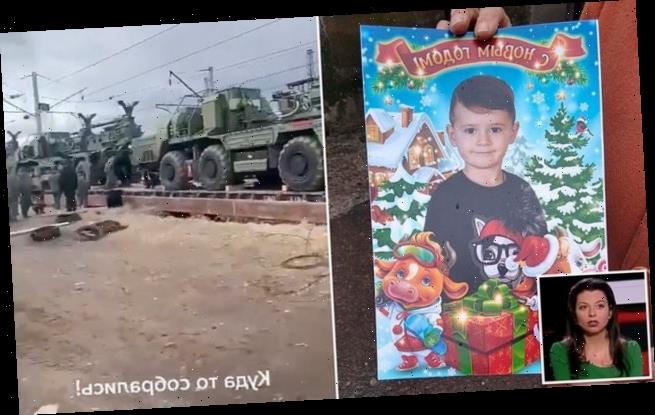 The Kremlin accuses ‘Ukrainian beasts’ of executing a boy, 5, with a drone as tensions rise between the two countries and Russia moves troops and tanks to the border 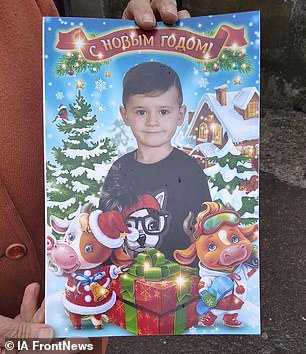 A boy aged five ‘killed by a Kyiv drone’ has become an alarming new flashpoint as tension spirals amid claims Russia is moving military hardware thousands of miles from Siberia to its border with Ukraine.

Moscow has furiously claimed a boy named Vladik died when an unmanned aerial vehicle struck a village in rebel held eastern Ukraine known as Donbass, and warned of ‘the most dire consequences’.

Strongly pro-Kremlin newspaper Komsomolskaya Pravda alleged the boy was ‘killed by Ukrainian beasts’ with an improvised explosive device. Vladik ‘loved nature, was a cheerful and kind little boy, (who) dreamed of becoming a cook … ‘ it said.

Ukraine has angrily denied any responsibility for his death and his grandmother’s alleged injury, blasting Russia for fake news as each side accused the other of deepening strains and inflammatory language.

One independent Russian military analyst has already warned that a European or even World war could be triggered ‘in a month’ pitting Russia against Ukraine and its Western allies including the US.

Worrying new footage purports to show the movement of a train loaded with tanks, armoured vehicles and troops as well as a Pantsir missile system from Tyumen in Siberia, heading west, 45 pieces of equipment in all.

They are believed to be bound for Voronezh region, which shares a border with Ukraine, according to the Conflict Intelligence Team, a Russian investigative blogger group monitoring armoured movements from open sources. 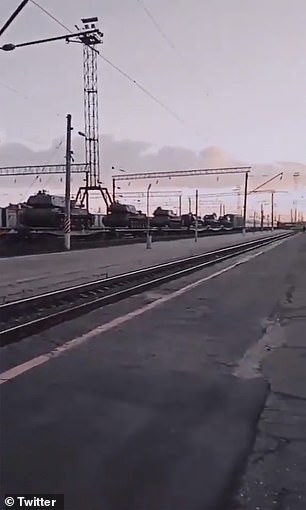 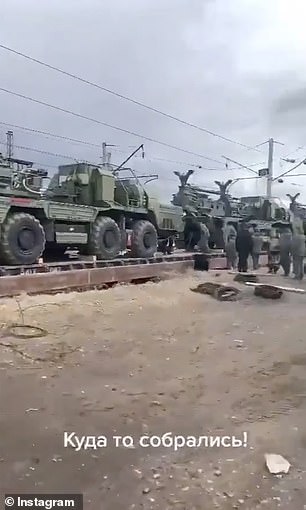 The train is loaded with Hurricane multiple launch rocket systems, in service with the 120th brigade

The group said: ‘We assumed the transfer of units from this district to the Ukrainian border, but now this information has been confirmed.

‘Such a redeployment cannot be explained by exercises, with the exception of strategic exercises, which only take place in autumn.

‘So in all likelihood, its goal is precisely to put pressure on Ukraine or prepare for a possible offensive.’

Other videos show movements of the Russian military within regions closer to the Ukrainian border.

Russian daily Nezavisimaya Gazeta reported cited experts as saying ‘it is obvious that Moscow is indeed preparing for a possible war or an armed conflict in the west.

‘The ‘undisguised’ relocation of Russian troops and a large quantity of military hardware to Crimea and the borders with Donbas is arranged.

‘These troops have been relocated to demonstrate military might of the Russian Armed Forces and their readiness to protect Russia’s interests.’ 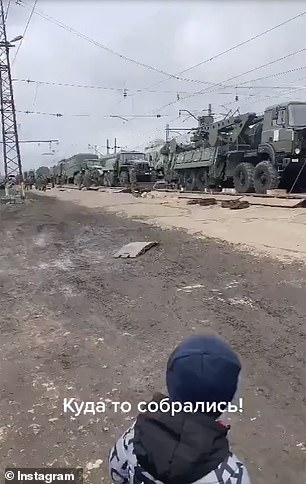 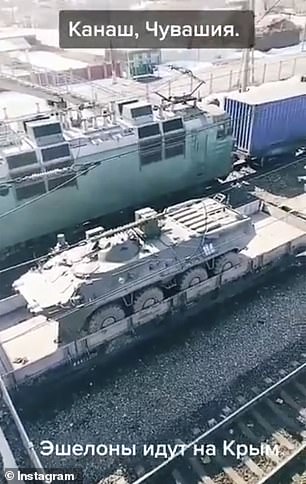 Pictured: More military hardware reportedly on the way to the disputed Ukraine border

‘The truth is that Russian people living in Donbass must live in Russia,’ she said on television.

She claimed that if reports are correct that Putin is pouring 4,000 extra troops to the border with Ukraine ‘then I am very happy’.

If not ‘then I am sad, because my position… remains the same: Mother Russia, take Donbass home.’

She said: ‘I believe that the overwhelming majority of people in Russia want this, and perhaps not overwhelming, but all the people of Donbass want it.

‘Those who did not want it left to Kyiv or elsewhere, for example to work in Europe. I believe that it would be in our interest.’ 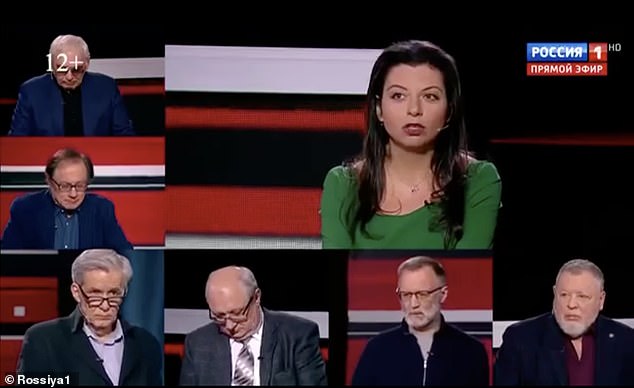 One Russian news outlet quoted Vladik’s unnamed grandmother in the village of Alexandrovskaya saying: ‘I do not know what kind of war there can be with this child.

She demanded that the dead boy’s photo should be taken to the mother of the Ukrainian soldier she alleged had killed her grandson.

‘Let her see what he received this money for,’ she said. ‘They are drenched in the blood of a child.’

A Ukrainian official questioned the facts of the incident including confusion over the name of the village.

‘It is not even known whether there was any explosion / detonation at all in this place, at this time,’ said Alexey Arestovich, spokesman for the Ukrainian delegation to the Trilateral Contact Group.

But Vyacheslav Volodin, chairman of the Russian parliament, insisted he was killed in a Ukraine drone attack.

He called for Ukraine to take responsibility and be excluded from the Council of Europe.

‘The rhetoric of the Ukrainian leadership, which is increasing tension, exacerbating the conflict, has gone far and is fraught with the most dire consequences,’ he said. 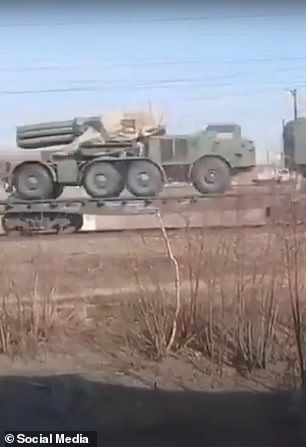 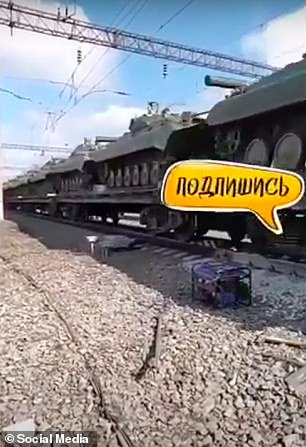 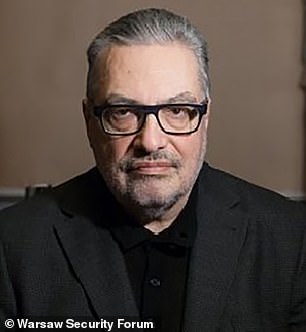 Russian military analysis Pavel Felgenhauer has warned: ‘The crisis has the potential to escalate into a pan-European war, if not even a world one.’

He expressed concern at Russian naval movements in recent weeks through the English Channel apparently to put in place landing craft for potential use on Ukraine’s Black Sea coastline.

The news of the child’s death comes days after a Russian military analyst warmed a European or even World War could be triggered in Ukraine after Russia dispatched 4,000 to the disputed border.

With tension sharply rising, analyst Pavel Felgenhauer, 69, said it now requires a ‘psychoanalyst’ to determine Russia’s intentions in Ukraine but warned events could see ‘war in a month’.

The West has expressed alarm about Moscow’s movement of troops and forces, and Felgenhauer says they are right to be concerned as unverified new footage appears to show military movements in Russia’s Voronezh, Rostov and Krasnodar regions, along with key railway routes.

‘The crisis has the potential to escalate into a pan-European war, if not even a world one,’ Felgenhauer warned starkly in an interview with Rosbalt news outlet in Russia.

‘But for now, potential. Will it happen or not? Let’s wait and see. In the West, they don’t know what to do about it.’ 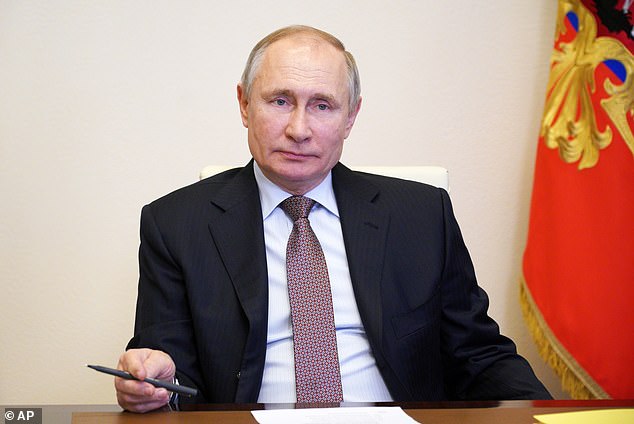 Russian President Vladimir Putin listens during a meeting on labor issues via video conference at the Novo-Ogaryovo residence outside Moscow, Russia, Wednesday, March 31, 2021. Over the weekend, Russia vowed to ‘take extra measures’ if Nato sends forces to Ukraine after the Kremlin dispatched the troops to the disputed border

Over the weekend, Russia vowed to ‘take extra measures’ if Nato sends forces to Ukraine after the Kremlin dispatched the troops to the disputed border.

‘No doubt such a scenario would lead to a further increase in tensions close to Russia’s borders. Of course, this would call for additional measures from the Russian side to ensure its security,’ Kremlin spokesman Dmitry Peskov told reporters.

He insisted, however, that Russia was ‘not threatening’ Ukraine, despite an earlier statement which warned a war in Donbass would ‘destroy’ its neighbour.

Footage has emerged showing shows dozens of military helicopters close to the frontier, and the movement of tanks and other military vehicles by train.

The United States pledged its ‘unwavering’ support to Ukraine on Thursday as defense officials said they were aware of thousands of troops newly-deployed to the separatist Donbass territory, which is controlled by pro-Moscow factions.

Asked why Russia may be pushing for a conflict now, Felgenhauer replied: ‘Address this question to a psychoanalyst. Do I need to explain?

‘The facts are there, everything is already happening.’

He claimed all the conditions could be in place by early May when Russian will hold a major Red Square parade to mark the anniversary of victory in World War Two, and he suspected a ‘decision has been made already’.

Felgenhauer said factors pushing Russia towards seizing land from Ukraine were ‘the closure of pro-Russian TV channels in Ukraine, the threat of arrest and trial of Ukrainian politician Viktor Medvedchyuk, the arrest of Alexei Navalny, [and] President Biden calling Putin a murderer’.

‘The threats are growing, and rapidly. Much is not discussed in the media, but we are seeing very bad signs,’ he added.

In the third week of March, three large Russian Baltic Fleet landing ships passed south through the English Channel, accompanied by a corvette, he said.

‘There will be ten such combat units in total, plus small airborne troops,’ he said. ‘You can collect up to two divisions, taking into account the air force.’

Russia could be planning a ‘Normandy-style landing’ between Odessa and Mykolaiv, he claimed.

Putin has huge forces in occupied east Ukraine – which fell under his sway in 2014, and in Crimea which was occupied. 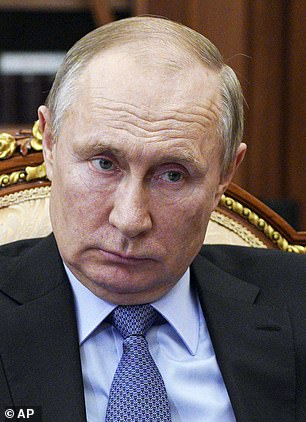 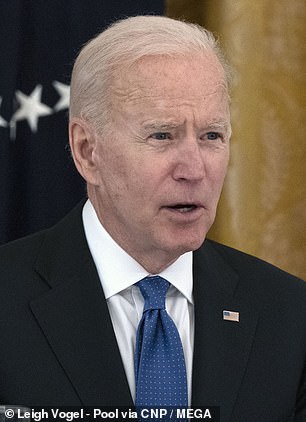 ‘Obviously, a major operation is being prepared, and other forces will be brought in as well,’ he said.

‘Everyone is talking about a possible tank invasion from Belgorod through Kharkiv in the direction of Zaporizhia in order to surround Ukrainian forces on the left bank of the Donbass.’

Putin might ‘cut off Ukraine from the sea, create [a new rebel state of] Novorossiya, for example’ or he could make a move then pause and start dictating terms to the West, Felgenhauer added.

Or Russia could seek to extend his control devouring Ukraine as far as Transnistria, a landlocked, Moscow-controlled no man’s land ‘unofficial state’ with its own KGB secret service, he claimed.

Felgenhauer predicted that the West’s expected reactions to such moves were ‘unclear’.

‘Some [in the West] say that the Russians should not be provoked, and military intervention is too risky.

‘Others, on the contrary, are in favour of unification (of Russia and Ukraine) and open confrontation, because then it will be possible to bargain with Russia.’

‘Despite significant enemy forces, the Ukrainian army is prepared for all potential scenarios,’ said Ruslan Khomchak, the Ukrainian commander-in-chief.

The Russian Federation moves troops within its own territory at its own discretion,’ he said.

The Kremlin said Thursday Ukraine and the West should not ‘worry’ about Russian troop movements on the Ukrainian border (pictured, a tank of pro-Russian militants of the self-proclaimed Donetsk People’s Republic)

‘This shouldn’t concern anyone, as such actions do not endanger anyone.’

He claimed: ‘As you know, intense activity of the armies of NATO member states and other organisations, as well as particular states etc, is being observed on the perimeter of Russian borders.

‘We need to stay on guard.’

A NATO official said that the Western allies have ‘concerns’ over Russian ‘large scale military activities around Ukraine’.

An American expert on Russia, Michael Kofman said that while there was ‘no strong evidence that an attack is imminent’ it was clear ‘something is up outside of regular exercises or normal troop rotation’.

He warned: ‘Russian intentions are unclear.’

Ukraine, Western countries and NATO accuse Russia of sending troops and heavy weapons to prop up its proxies in Donbass who seized a swathe of eastern Ukraine in 2014.

Russia says it only provides political and humanitarian support to separatist fighters in what it casts as an internal conflict.

‘In addition, an attempt to advance Russian occupation forces deep into Ukraine is not ruled out,’ it said.