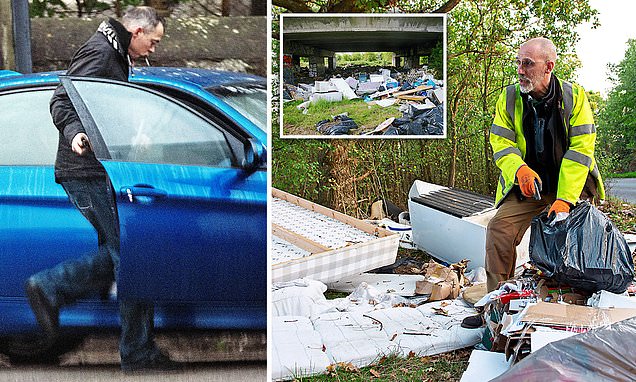 War in the woods: The countryside citizen heroes who are hunting down and shaming illegal fly-tippers

Buckinghamshire has long been known for its lush, wooded valleys, meandering rivers and the rolling Chiltern Hills.

Today, though, it’s an uglier vision that lies in front of me. Spilling from the road into a picturesque stretch of ancient woodland is a mountain of discarded toys, broken furniture, a fridge, two mattresses, builders’ debris and an old barbecue.

‘Horrible isn’t it?’ says David Rounding, an enforcement officer for Buckinghamshire County Council’s environment department and my guide for the day.

His mission is to show me how far this beautiful county has been polluted by fly-tipping – something he demonstrates with shocking ease. 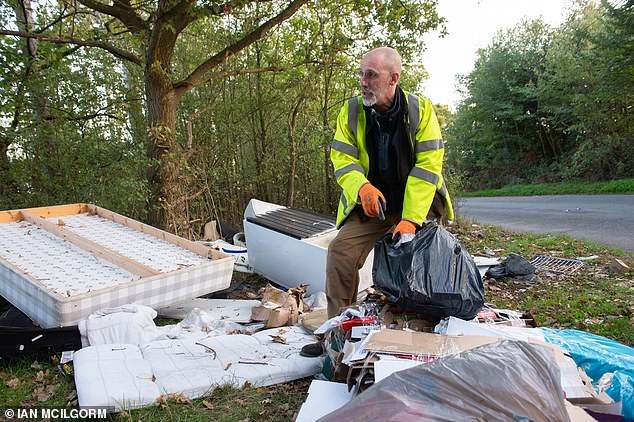 David Rounding, waste enforcement officer with Buckinghamshire County Council, says the fly-tipping epidemic is due to the ‘greed and laziness of the British public’

From microwaves to masonry, computers to mounds of cardboard and even, on one occasion, a putrid mess of 1,200 rotten eggs – it’s all in a day’s work for Mr Rounding, whose job it is to track down illegal dumpers and pass details to the police.

Little wonder that he struggles to conceal his anger at what he calls the ‘greed and laziness’ of the British public offloading their waste in our parks, woodland and roadsides.

‘It doesn’t matter if it’s a single bag or a truck load, the material presents dangers to wildlife, it pollutes local areas and is extremely expensive to clear,’ he says.

He, at least is fighting back – and so are 67-year-old Angela Walters and her husband Martin, 76. Fly-tipping has become an ever-increasing menace along the remote lane in the south of the county where the couple have lived for more than 30 years.

‘You wouldn’t believe what we have had dumped in the road and into our wood,’ Mrs Walters says. ‘Burnt cars, dead dogs, piles of wood with screws and nails, a three-piece suite with pornographic magazines stuffed inside it, and even boxes of dead mice and chicks from a laboratory.’

Last month, she even witnessed an incident when a van driver dumped boxes of documents and papers from a trailer.

Mrs Walters decided to take the law into her own hands, giving chase in her car after the speeding driver. Six hair-raising miles followed as a determined Angela resolved to take down the driver’s number plate which was concealed by his trailer.

The fly-tipper’s undoing finally came when he had to negotiate a roundabout. ‘As soon as he turned, the number plate became visible,’ Mrs Walters recalls. ‘I quickly jotted it down, and then went back home and phoned the police.’

Mrs Walters was happy to find out later that the van driver was fined.

One of the biggest problems, and the most difficult to stop, are the efforts of the criminal gangs who make huge profits from dumping truckloads on private or public land on an almost industrial scale. These ‘multi-load’ sites, as they are known, are big business – with some reports claiming it is a £1billion industry. 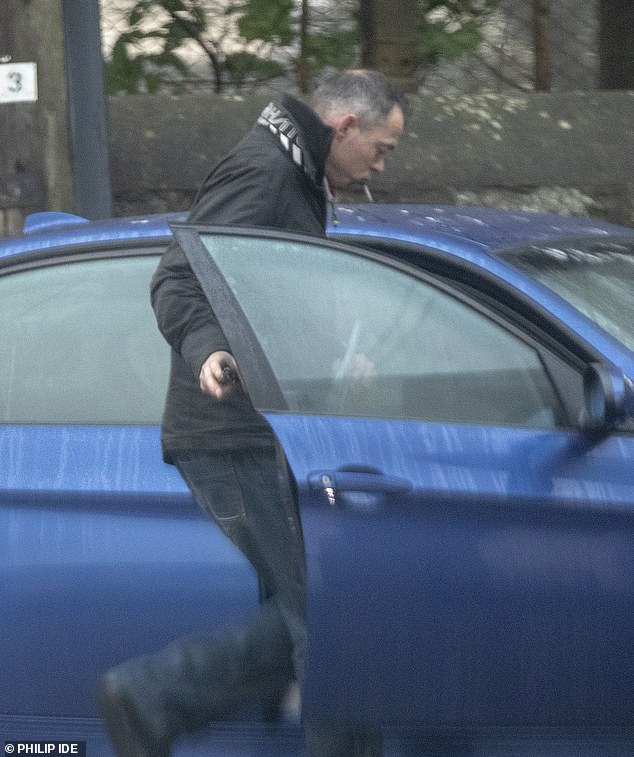 Wayne Plummer, 39, was given a 100-hour community work order for his ‘premeditated and planned’ dumping of at least three loads of household, industrial and commercial waste at three sites around Devon and Cornwall

The stories behind these figures are frequently mind-boggling: in one recent case, 600 tons of building waste was dumped under a viaduct that runs over the A40 in Buckinghamshire.

There are no shortage of gangs keen to make a quick buck from their anti-social habit. Take Wayne Plummer, Ashley Brown and Michael Baggally, who last year were discovered dumping at least three loads of household, industrial and commercial waste at three sites around Devon and Cornwall over a period of three months.

The trio had been paid to collect household, industrial and commercial waste even though they were not registered waste carriers. They simply fly-tipped the goods and pocketed the money.

Among their haul were sofas, carpets and all manner of junk – and it was dumped in car parks and on public footpaths. In one instance, waste was deposited on a public footpath and set on fire. Clearance cost to the authorities? More than £5,000.

After the most recent incident the authorities decided to investigate, and with evidence at three sites linking the waste to Plummer Brown and Baggally, all three were prosecuted.

Plummer, 39, was given a 100-hour community work order for his ‘premeditated and planned’ crime. He at first denied any involvement but was confronted with photographs taken by a woman who witnessed a van, hired in his name, dumping one of its loads.

We tracked Plummer down to his end-of-terrace home in Princetown, Dartmoor, where, with a cigarette drooping out of the corner of his mouth, he tried to offload the blame once more.

‘I was a stupid t*** mate,’ he said, claiming: ‘I helped someone out and it all backfired. I went off to get my kids and two of my friends jumped in the van and went off to do fly-tipping in broad daylight.’ Plummer, who is married and says he is a full-time carer for his children, was also banned from working in waste management for five years and ordered to pay £520 compensation.

Whatever his excuse, the fact is that Plummer is a criminal – one of many operating around the country who know there is little being done to stop them.

Local authorities, who are responsible for policing illegal dumping, blame diminishing resources. In recent years many councils have slashed waste disposal budgets, cut back on free bulk waste collections and imposed draconian restrictions on household refuse. They have also reduced the number of rubbish collections, allowing debris to pile up.

Allison Ogden-Newton, chief executive of environmental charity Keep Britain Tidy, points out that even though fly-tipping penalties can now lead to a prison sentence, many councils don’t pursue conviction. Buckinghamshire is bucking the trend: here, council officials are taking a ‘zero-tolerance’ approach to fly-tipping, with offenders 16 times more likely to be caught and prosecuted compared to the national average for England. Over the past two years, the council’s enforcement officers have secured 68 convictions alongside a total of £116,687 in fines – a sum which goes some way to covering the authority’s £750,000 annual clear-up and enforcement costs.

For David Rounding it’s a vocation, and one he pursues like a bloodhound, using details left behind by unsuspecting householders to track them down.

‘You would be surprised what people leave behind in their rubbish that we later use to identify them,’ Mr Rounding says. ‘We’ve found receipts, letters, even photographs – usually leading to the person who paid someone to get rid of their stuff.’

On one occasion, he found a menu from an Italian restaurant in Hackney, East London, along with several industrial-sized fridge-freezers left to rust in a field. Incensed, he immediately drove down the A40 to confront the owner. The restaurateur was prosecuted along with the van driver he paid to take the items.

Mr Rounding was also part of a team that brought another brazen fly-tipper, Sebastian Pana, to justice. Last year Pana pleaded guilty to two offences of illegal dumping after a passer-by spotted his Isuzu tipper truck in a quiet country lane loaded with mattresses and, thinking it looked suspicious, took photographs of the vehicle.

The following day the same witness saw several mattresses and divan beds similar to the ones he had seen on the truck.

Buckinghamshire’s enforcement team, traced Pana, 44, to his home in Northolt 14 miles away along the A40. He pleaded guilty and, with fines and other costs, including clearing the sites, he was ordered to pay £3,165.

For every flagrant law-breaker, however, Mr Rounding believes many more are motivated by plain ignorance, with a mindset of what is out of sight is out of mind. 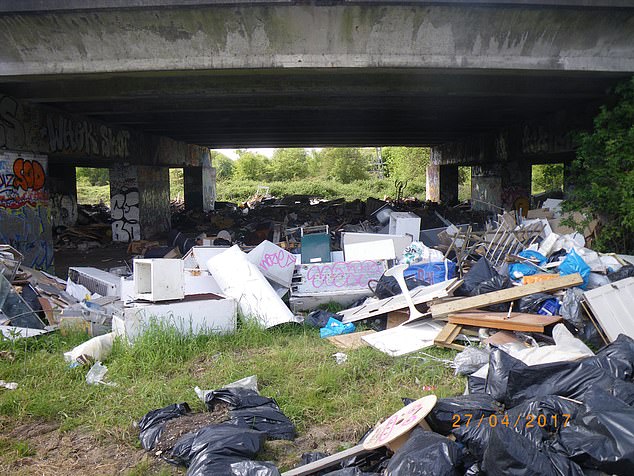 Blight: Discarded items under an A40 bridge in Buckinghamshire reveals the scale of the problem

‘Most people don’t think about what happens when they pay a man with a van to clear their rubbish, but they are part of the problem and they have a duty of care to ensure it is disposed of legally and safely,’ Mr Rounding says. ‘Few are aware that paying someone else to move your rubbish can still leave you culpable if they dump it, with fines of up to £5,000 and a criminal record.’

It is all too easy to think of fly-tipping as a victimless crime, particularly when the refuse has been dumped many miles away.

It’s a perception the Bishop of St Albans, Dr Alan Smith, is anxious to dispel, pointing out that it is often landowners who have to bear the brunt of the cost for clearing up the sprawling mess left by illegal dumpers. The Bishop regularly tables questions in the House of Lords about the impact it has on farming communities.

‘It’s not just a blight, but a huge cost, much of it falling on the owners of land on which waste is dumped and who can least afford it,’ he says. ‘They are often hard-pressed farmers who cannot monitor every inch of their land.

‘Some have even resorted to creating dykes and moats to hinder access to their land. It is ruining landscapes and impoverishing many farmers.’

It is time, he says, for the rest of us to make a stand.

‘I will order the Navy to replace Channel ferries’ -Gavin Williamson