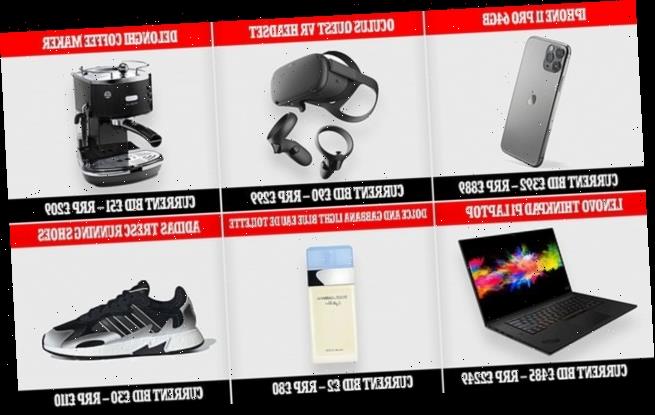 The auction sites that sell off Christmas returns at bargain prices

Unloved present bonanza: The auction sites that sell off Christmas returns and ex-display items for bargain basement prices – including iPhone11 Pros for less than £500 and VR headsets under £150

Bargain hunters looking for a deal in the January sales might well be searching in the wrong place.

While High Street stores and online retailers slash prices on their winter lines, savvy bargain hunters are snapping up other cheap deals elsewhere.

Unloved presents and old shop display items are being flogged for discount prices on some UK auction sites – which specialise in shop return items.

While many returns will end up back on the shelves, some big chain stores are unwilling to go to the effort of restocking returned goods.

And they often sell them on to ‘recommerce’ websites – where savvy savers can pick up a deal at bargain basement prices.

On one site, John Pye, which specialises in returns, second hand items and ex-display goods, an iPhone11 Pro – which normal sells for an RRP of £899 – is currently available to bid for £450.

On another site, iBidder, unused display perfumes worth £80 are on sale for as little as £2. 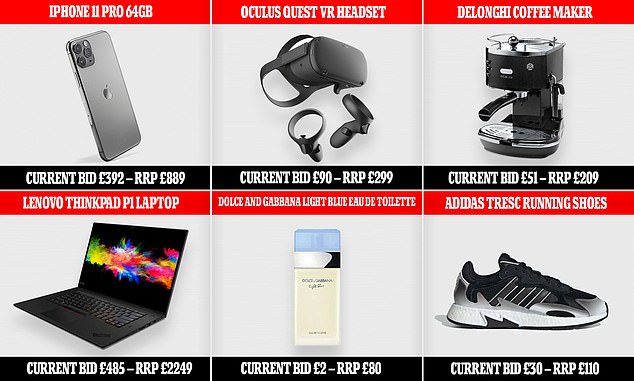 These are some of the items which you can find on auction sites at the moment – the prices are correct as of 1pm, January 3 and do not include fees and charges

How does the process work?

Simply, customers will often return items that they do not want or need to the retailer, whether those items were purchased online at sites like Amazon or High Street stores.

Note: These are current bids as of 1pm on January 3. There are also added charges/buyer commissions that may increase the total cost.

But retailers sometimes don’t restock the returned items for resale themselves because the cost of doing so exceeds the value of those items.

So the retailer instead decides to cut its losses and divert the returned items to third-party recommerce firms in the UK like iBidder and John Pye auctioneers.

The contractors then try to turn a profit by either selling the products to consumers online or selling them in bulk to wholesale buyers.

If that doesn’t work, they just recycle them. Otherwise, the items would be discarded in a landfill, thus causing environmental problems.

In recent years, e-commerce firms like Amazon have made it easier for consumers to return unwanted items.

The strategy behind this thinking is that customers who have an easy time returning items will be more likely to shop again with the same retailer thanks to the pleasant experience they had in getting their money back.

The recommerce market has created a cottage industry of third-party sellers who find functional, in-demand items at bargain-basement prices and then re-sell them on sites like Amazon and eBay.

There are two main reasons why a retailer cannot resell a returned item, even if it is still brand new and unused.

The first is shipping and handling costs, as well as reshipping and labour costs involved in sending it to its new buyer.

The second reason that retail companies don’t always put returned items back onto the shelves is that the longer an item stays out of circulation the less value it traditionally has.

As for buyers, as always, keep consumer smart, because you are not always guaranteed a discount deal.

Due to the nature of auctions, prices can on occasion rocket towards average RRP prices, and there are on some websites added fees and buyer commissions to add on top as well.

CategoryWorld News
TagsAuction of sell sites that the