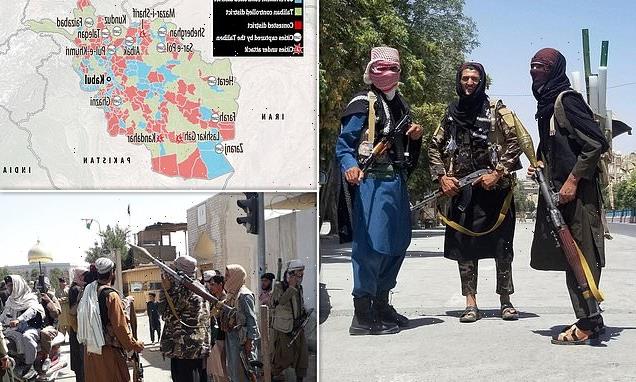 The Taliban has captured Afghanistan’s third biggest city, Herat, further squeezing the country’s embattled government just weeks before the end of the American military mission there.

The seizure of Herat – a strategic provincial capital near Kabul – on Thursday marks the biggest prize yet for the Taliban, which has taken 11 of Afghanistan’s 34 provincial capitals as part of a weeklong blitz.

Taliban fighters rushed past the Great Mosque in the historic city – which dates to 500 BC and was once a spoil of Alexander the Great – and seized government buildings.

Witnesses described hearing sporadic gunfire at one government building while the rest of the city fell silent under the insurgents’ control.

An AFP correspondent filmed the Taliban flag flying over the police HQ in Herat, while the insurgents tweeted ‘the enemy fled… Dozens of military vehicles, weapons and ammunition fell into the hands of the Mujahideen’.

Herat had been under militant attack for two weeks, with one wave blunted by the arrival of warlord Ismail Khan and his forces. But on Thursday afternoon, Taliban fighters broke through the city’s defensive lines.

Afghan lawmaker Semin Barekzai also acknowledged the city’s fall to the Taliban, saying that some officials there had escaped. 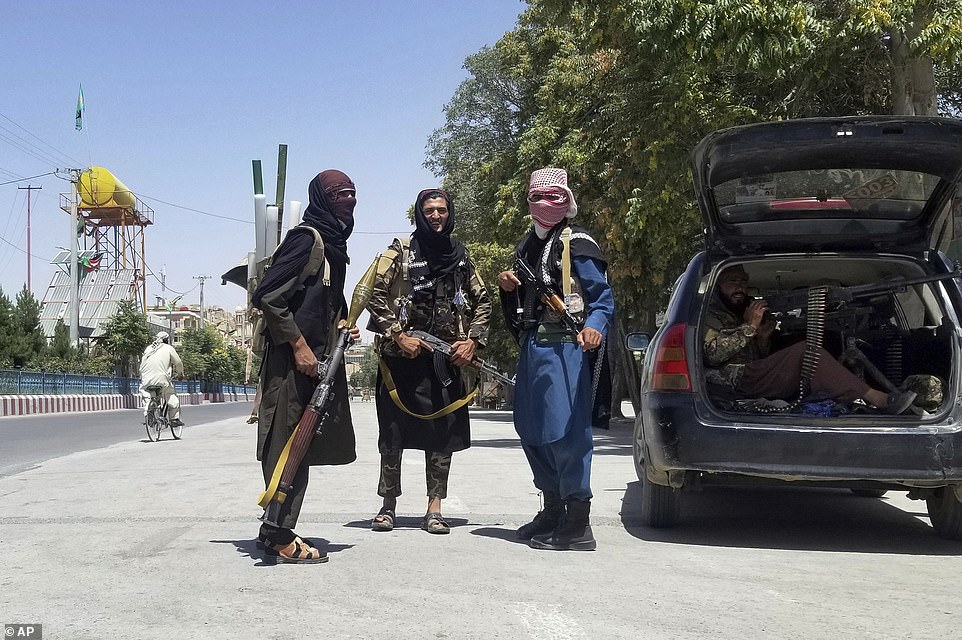 The Taliban has captured Afghanistan’s third biggest city, Herat, further squeezing the country’s embattled government just weeks before the end of the American military mission there. Pictured: Taliban fighters pose for a photo in Ghazni on Thursday 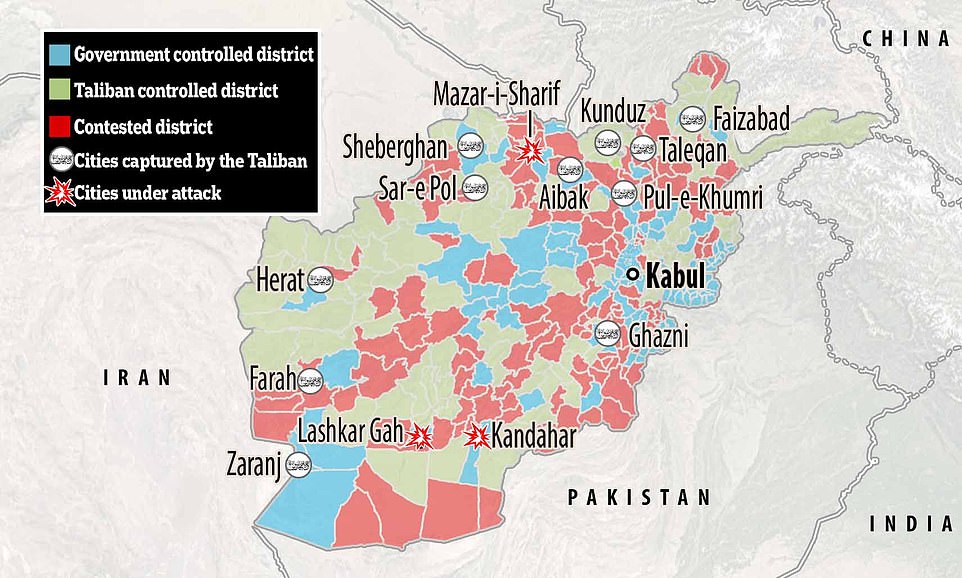 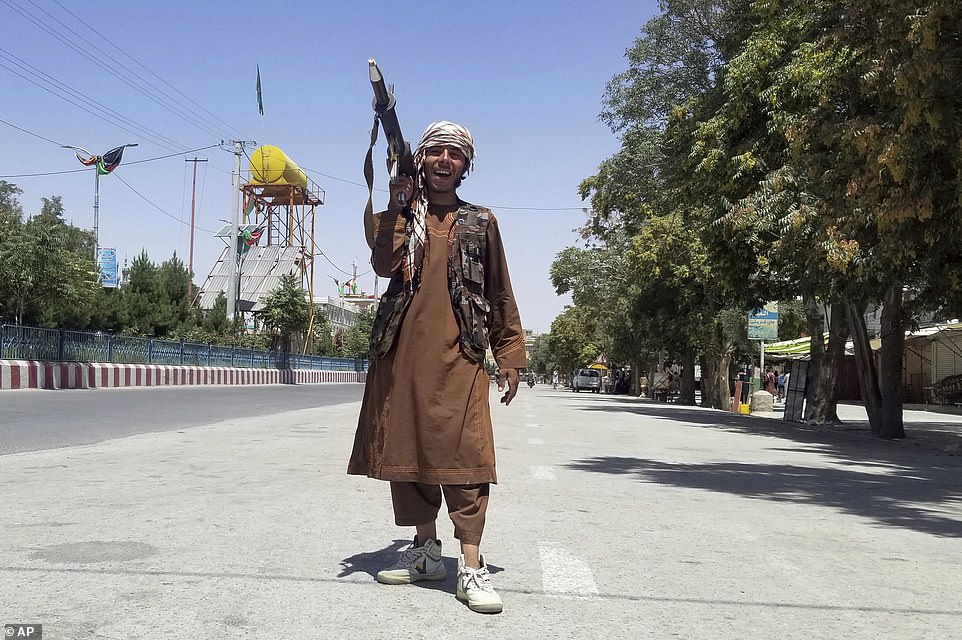 Witnesses described hearing sporadic gunfire at one government building while the rest of the city fell silent under the insurgents’ control. Pictured: A Taliban fighter poses for a photo in Ghazni on Thursday 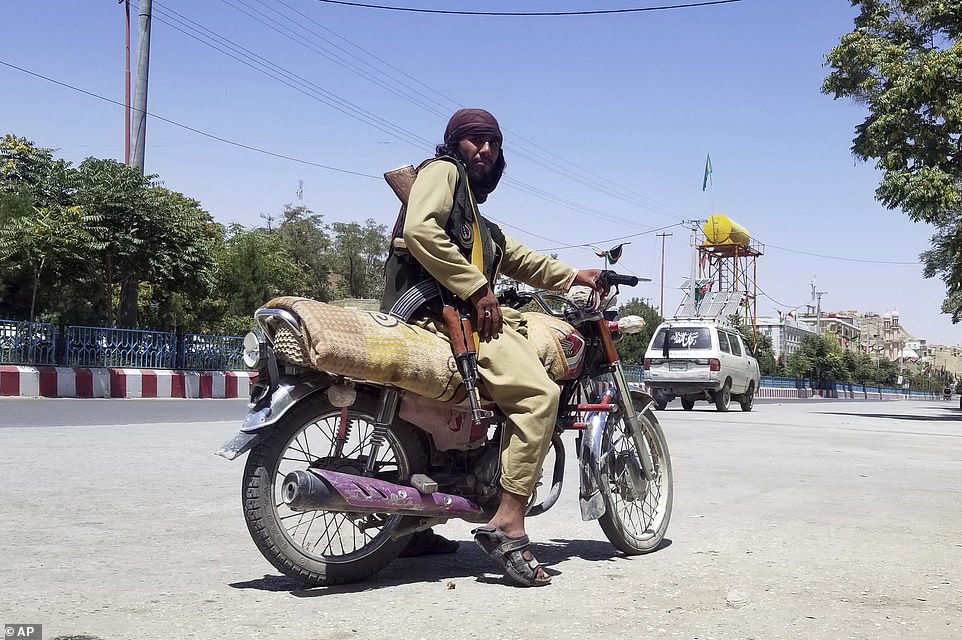 Herat had been under militant attack for two weeks, with one wave blunted by the arrival of warlord Ismail Khan and his forces. But on Thursday afternoon, Taliban fighters broke through the city’s defensive lines. Pictured: A Taliban fighter poses for a photo in Ghazni on Thursday 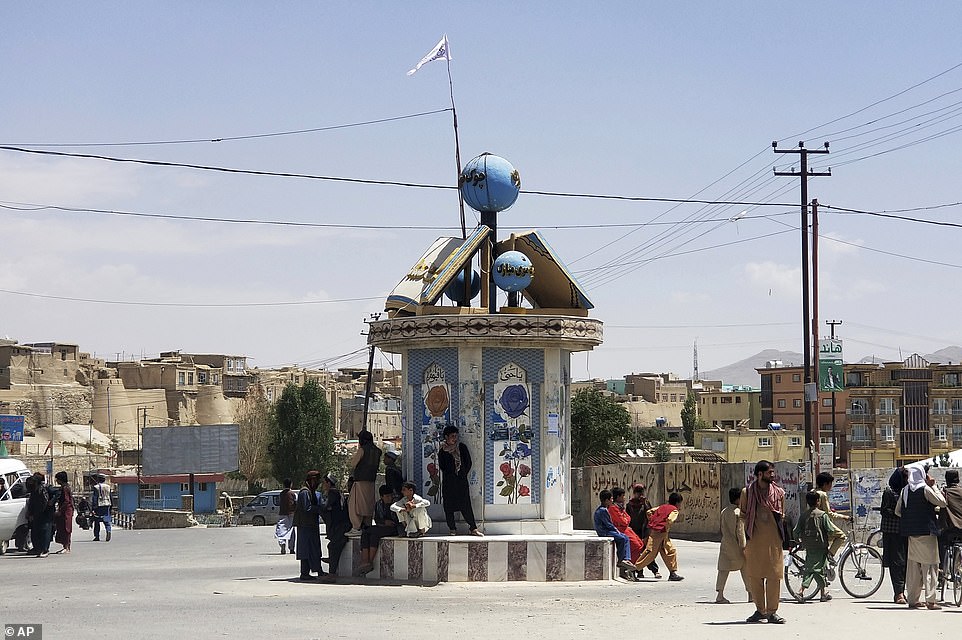 News of the capture of Herat came as the United States accused the group of executing Afghan government troops who had surrendered. A Taliban flag is seen flying in a square in the city of Ghazni on Thursday

The Taliban has now seized around two thirds of the country from the government in a little over three months.

News of the capture of Herat came as the United States accused the group of executing Afghan government troops who had surrendered.

It was not immediately clear where the new reports had come from. Video taken in Faryab province last month did appear to show Taliban fighters massacring 22 Afghan commandos after they had surrendered, including the son of a prominent general.

Hundreds of government troops have surrendered to the Taliban since fighting escalated in May with the withdrawal of US troops – some without firing a shot, others after being cut off and surrounded with little or no chance of reinforcement or resupply from the government in Kabul.

In an attempt to stop the bloodletting, Afghan diplomats in Qatar said they had approached the Taliban with a deal today that would see the group included in a national unity government in return for halting the fighting.

But such talks have been stalled for years over ‘unreasonable Taliban demands to turn the country into an Islamic emirate – and there is little reason to believe they will have softened that stance after their battlefield triumphs.

In a sign of the rapidly worsening situation, the US today told all of its citizens to leave the country as soon as possible by any commercial means. It comes a week after the UK gave its citizens the same advice, and after India pulled its diplomatic staff out. 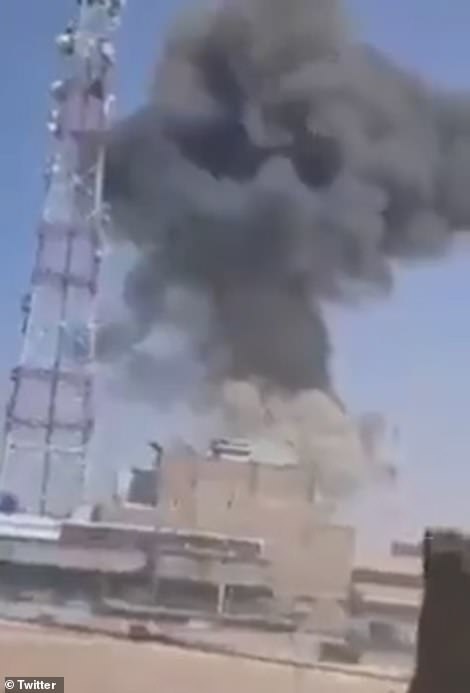 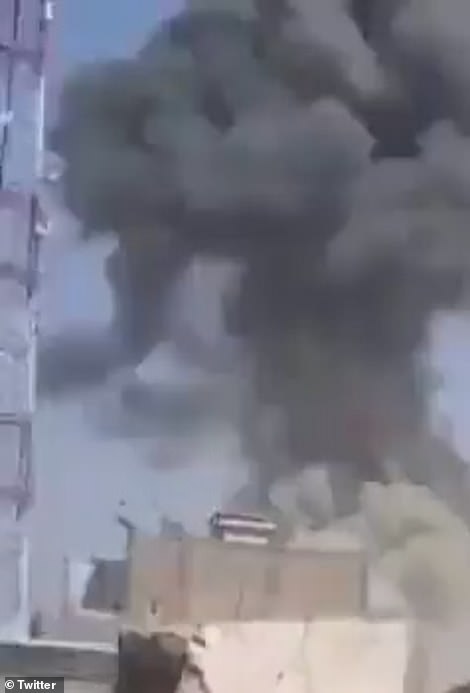 Lashkar Gah, capital of Helmand, appears on the verge of falling to the Islamists after a huge IED explosion destroyed part of the police headquarters on Wednesday and allowed fighters to capture it

Earlier today, it was announced the jihadists had taken the city of Ghazni, located just 80 miles from Kabul and along the main highway to the south. The Taliban already controls the main highway going north, and is tightening the noose on what could soon become Ghazni’s last stronghold.

The capture of Ghazni, meanwhile, cuts off a crucial highway linking the Afghan capital with the country’s southern provinces, which similarly find themselves under assault as part of an insurgent push some 20 years after US and NATO troops invaded and ousted the Taliban government.

While Kabul itself isn’t directly under threat yet, the losses and the battles elsewhere further tighten the grip of a resurgent Taliban estimated to now hold some two-thirds of the nation.

Thousands of people have fled their homes amid fears the Taliban will again impose a brutal, repressive government, all but eliminating women’s rights and conducting public amputations, stonings and executions. Peace talks in Qatar remain stalled, though diplomats met throughout the day.

The latest US military intelligence assessment suggests Kabul could come under insurgent pressure within 30 days and that, if current trends hold, the Taliban could gain full control of the country within a few months.

The Afghan government may eventually be forced to pull back to defend the capital and just a few other cities in the coming days if the Taliban keeps up its momentum.

The onslaught represents a stunning collapse of Afghan forces and renews questions about where the over $830 billion spent by the US Defense Department on fighting, training those troops, and reconstruction efforts went – especially as Taliban fighters ride on American-made Humvees and pickup trucks with M-16s slung across their shoulders.

Afghan security forces and the government have not responded to repeated questions from journalists over the days of fighting, instead issuing video communiques that downplay the Taliban advance.

The jihadists said Lashkar Gah was briefly captured on Wednesday, but later revised to say that fighting is still ongoing and the city is not fully under their control.

A huge IED exploded near the main police headquarters yesterday, sending a plume of smoke into the sky and partially destroying the outer walls – allowing Taliban fighters to stream inside.

Multiple police officers were killed, the jihadists said, but some government troops managed to escape the slaughter and made it to the governor’s office, where they have resumed their fight.

Nasima Niazi, a lawmaker from Helmand, said she believed the Taliban attack killed and wounded security force members, but she had no casualty breakdown.

Another suicide car bombing targeted the provincial prison, but the government still held it, she said.

In Kandahar, the Taliban claimed to have captured the city’s prison on Wednesday, freeing ‘hundreds’ of inmates which including some of its own fighters, who have now rejoined the ranks as reinforcements.

The loss of the jail is an ominous sign for government forces defending the city, which has been besieged for weeks by an assault that shows no sign of letting up.

Afghan President Ashraf Ghani is trying to rally a counteroffensive relying on his country’s special forces, the militias of warlords and American airpower ahead of the US and NATO withdrawal at the end of the month.

He was in the city of Mazar-i-Sharif, in the country’s traditionally anti-Taliban northern strongholds, on Wednesday in an attempt to rally his men as jihadists approached its outskirts with a major offensive expected soon. 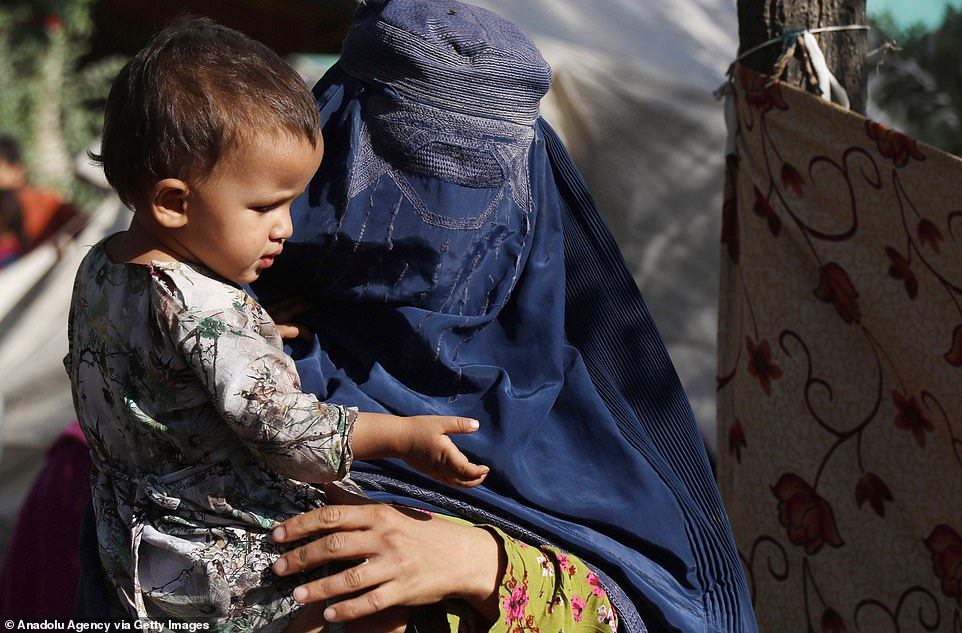 Fighting has displaced hundreds of thousands of Afghan civilians who have fled their homes, with thousands of those heading for the safety of government-held Kabul (pictured) 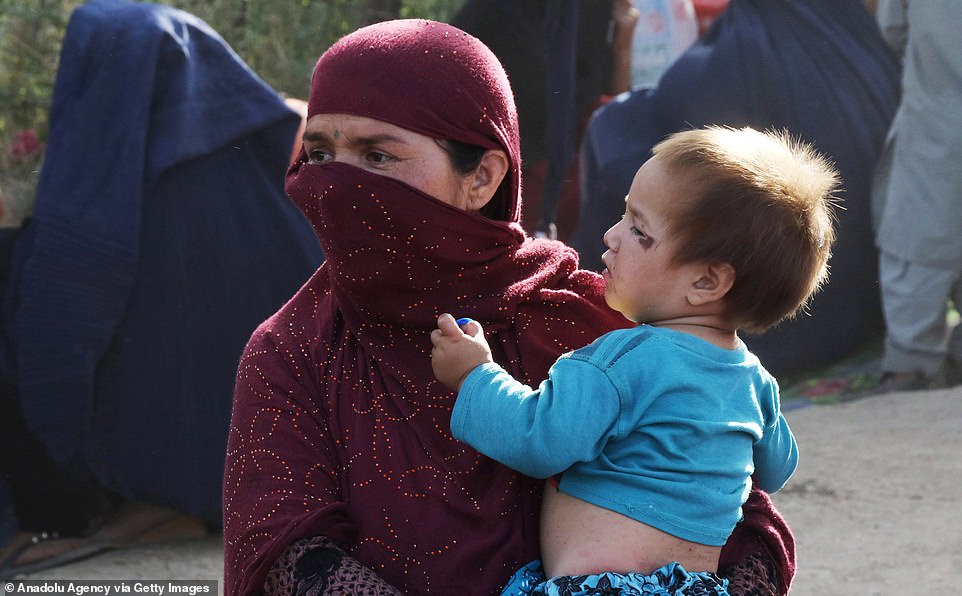 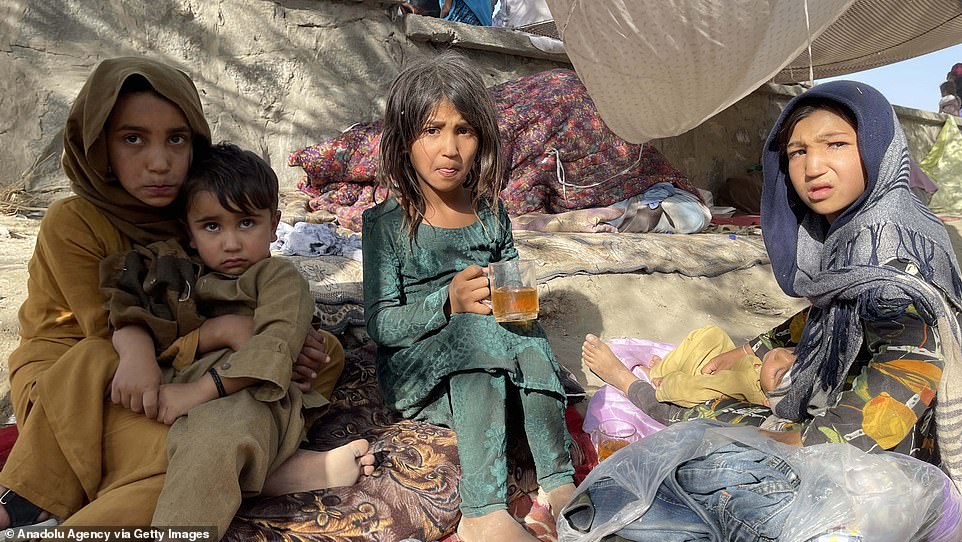 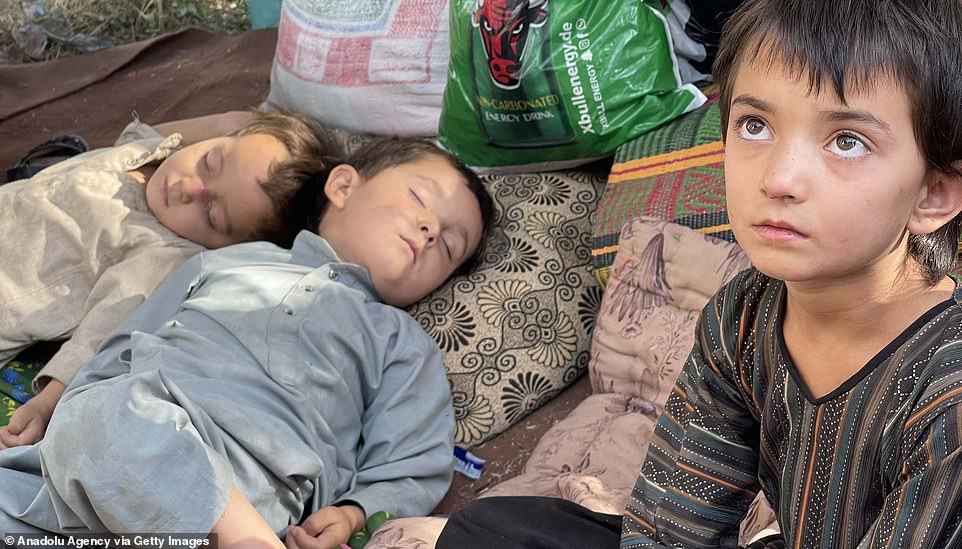 Young boys rest in a refugee camp in Kabul, Afghanistan, after fleeing fighting elsewhere in the country 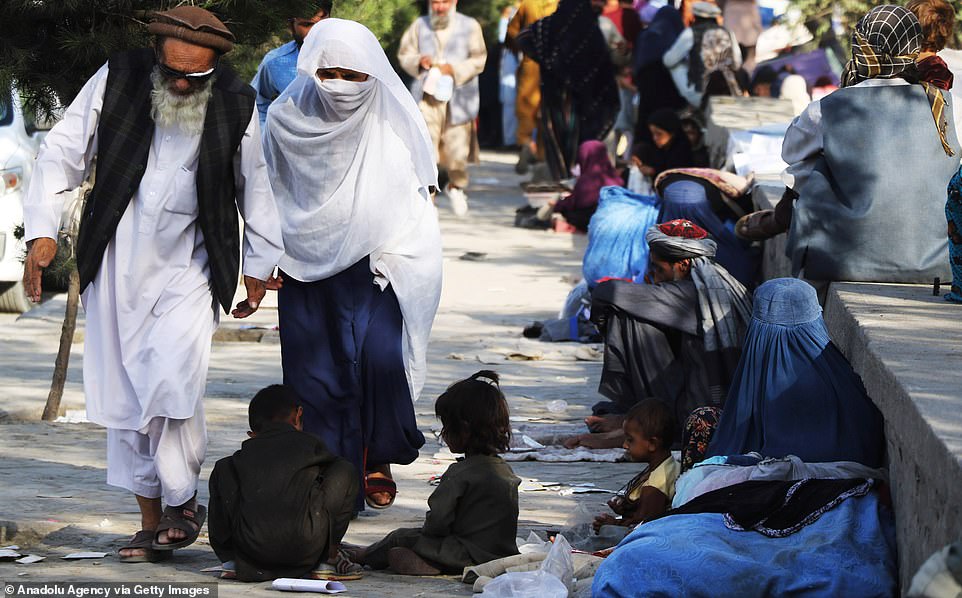 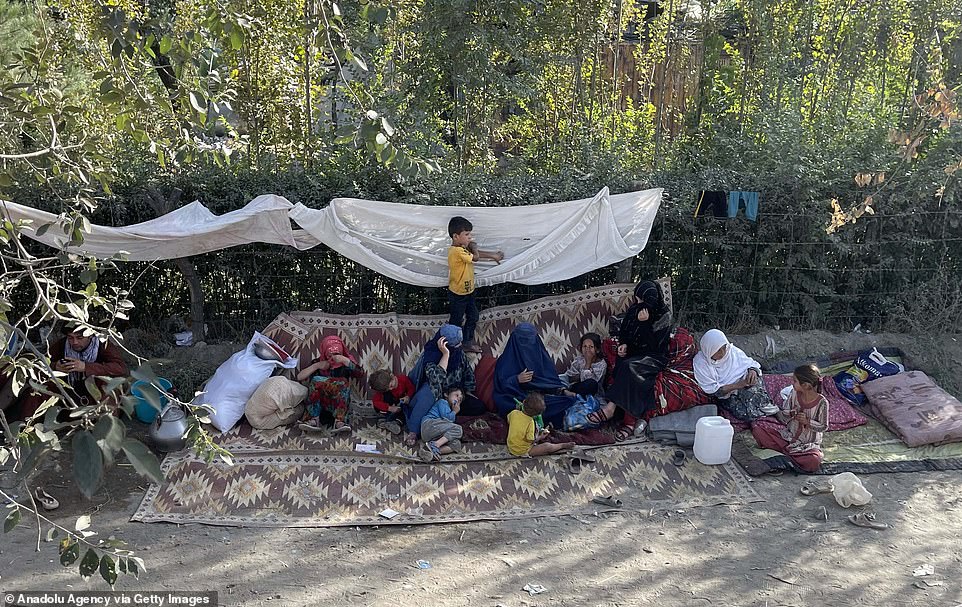 With the Afghan air power limited and in disarray, the US Air Force is believed to be carrying out some series of strikes to support Afghan forces.

Aviation tracking data suggested US Air Force B-52 bombers, F-15 fighter jets, drones and other aircraft were involved in the fighting overnight across the country, according to Australia-based security firm The Cavell Group.

It’s unclear what casualties the US bombing campaign has caused. The US Air Force’s Central Command, based in Qatar, did not immediately respond to a request for comment Thursday.

The success of the Taliban offensive also calls into question the outcome of long-stalled peace talks in Qatar aimed at moving Afghanistan toward an inclusive interim administration as the West hoped.

Instead, the Taliban appears to be aiming to seize power by force, threatening a split of the country into factional fighting like it did after the Soviet withdrawal in 1989.

In Doha, US envoy Zalmay Khalilzad has met with diplomats from China, Pakistan and Russia in an effort to as a group warn the Taliban they could again be considered international pariahs if they continue their offensive, State Department spokesman Ned Price said.

Khalilzad also plans to meet with Afghan government and Taliban officials as the fighting goes on without a sign of it abating.

The multiple battle fronts have stretched the government’s special operations forces – while regular troops have often fled the battlefield – and the violence has pushed thousands of civilians to seek safety in the capital. 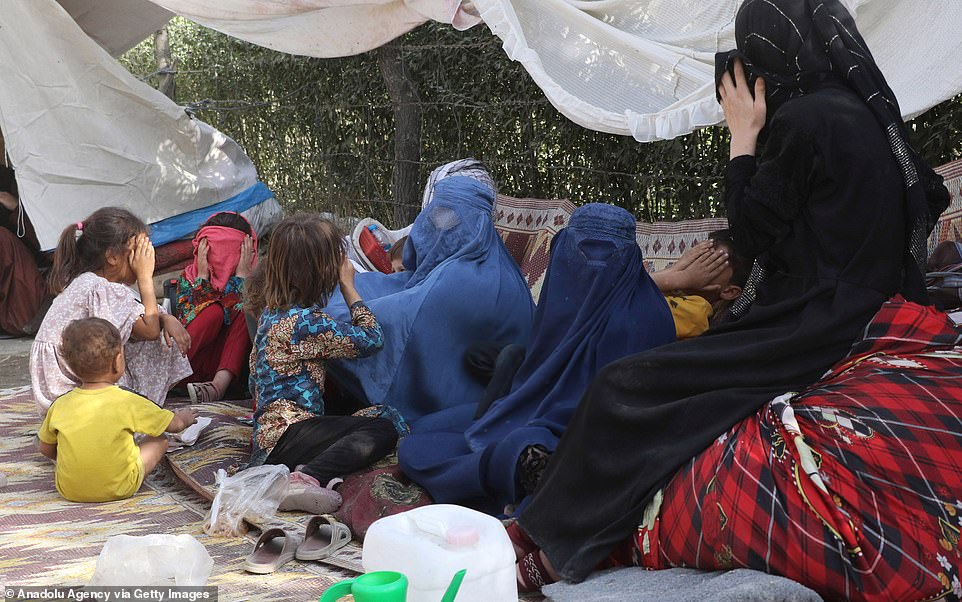 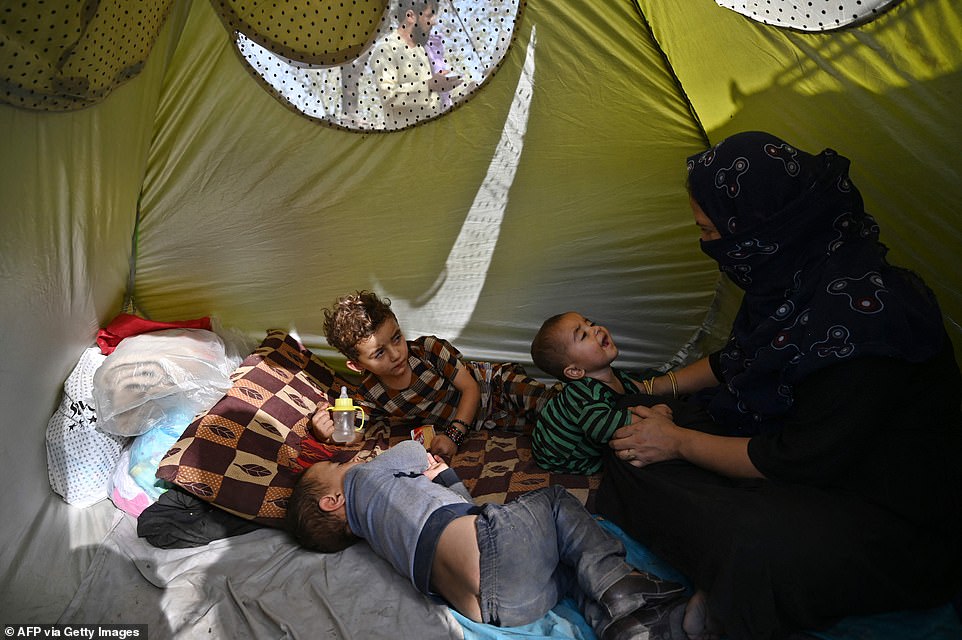 An internally displaced Afghan family, who fled from Takhar province due to battles between Taliban and Afghan security forces, sits inside their temporary tent at Sara-e-Shamali in Kabul 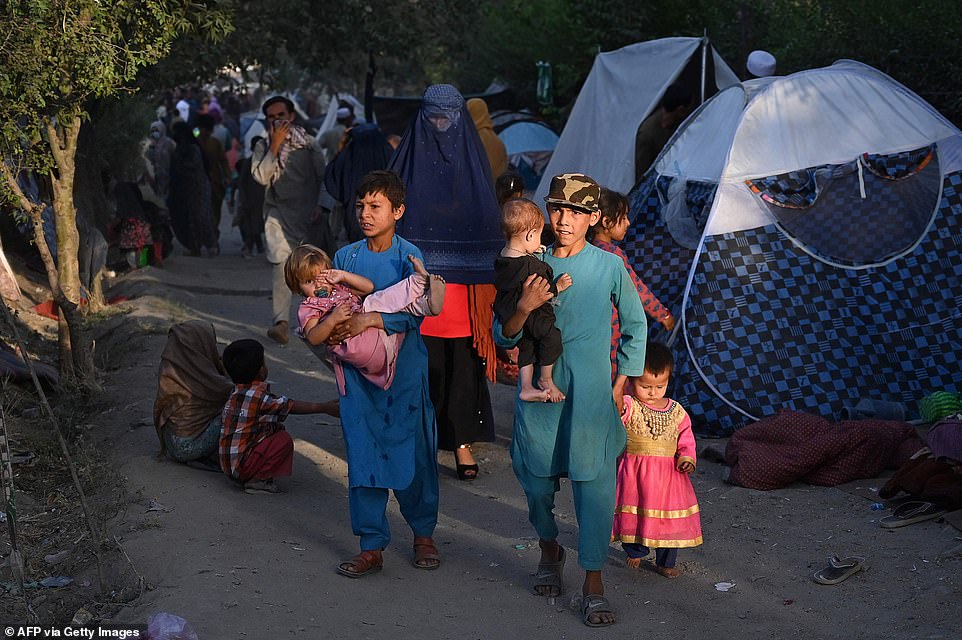 Internally displaced Afghan families, who fled from Kunduz, Takhar and Baghlan province due to battles between Taliban and Afghan security forces, walk past their temporary tents at Sara-e-Shamali in Kabul 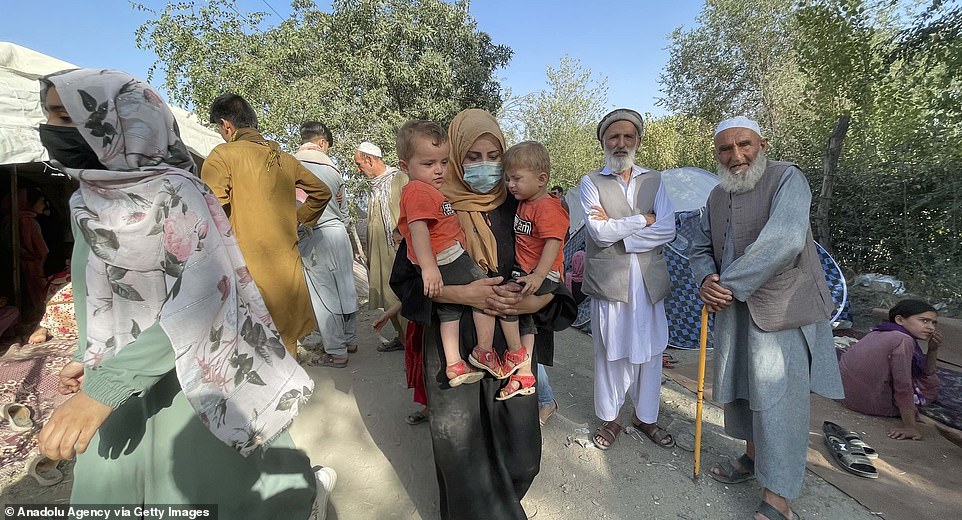