The four-phase plan announced earlier this year focuses heavily on increasing vaccination rates and the easing of restrictions, and ends with a “final post-vaccination phase” when international borders open and the community begins living with COVID-19. 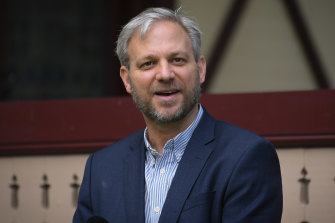 But in the editorial published in the Medical Journal of Australia on Monday, the public health experts argue another phase is needed to address the economic impacts of COVID-19, disproportionately felt by those on low incomes, and tackle workforce burnout and mental health impacts.

“Disappointingly, the road map includes no explicit recovery phase: it [is] as if we could all soon heave a sigh of relief and simply move on,” it says.

“COVID-19 became a disease of low-income workers – those who couldn’t work from home – and their families and communities. It affected Australia very unevenly, with poorer outcomes for those at greatest disadvantage.”

The opinion piece on entering Australia’s third year with COVID-19 also expresses optimism that 2022 could mark the start of the “interpandemic period”, when, subject to the absence of more harmful variants and an improved vaccine rollout, there may be only occasional COVID-19 outbreaks, not requiring lockdowns.

A Victorian government spokesman said the article did not represent the views of the government.

“We are strong supporters of the national plan and continue to deliver on it as vaccination rates rise,” the spokesman said.

“We’re driving Victoria’s recovery through unprecedented investment in jobs, services and supporting our hospital system as we reopen.”

In an interview with The Age and Sydney Morning Herald, Professor Duckett described the national cabinet plan as “really peculiar” in its omission of plans to restimulate the economy or address a shadow pandemic of mental health problems, missed schooling and deferred healthcare.

“I think part of it is the Commonwealth government wants to pretend there are no problems, as part of its political narrative,” he said.

“We do have to accept that there are ongoing issues and the Commonwealth has to fund some of it. And they would prefer not to fund any of it.”

The article calls for lessons to be learnt from the “messy 2021 vaccination rollout”, and for learning processes including formal inquiries to be undertaken at local, state and national levels.

“From a public health perspective, this should not be a witch hunt, but rather an exercise in learning and improvement,” it says. 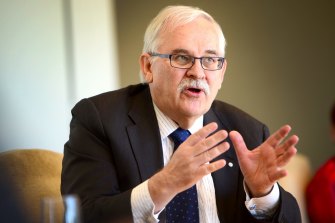 Stephen Duckett says the federal government “wants to pretend there are no problems”.Credit:Jeremy Piper

Professor Duckett said a royal commission might be appropriate, though he stressed he did not want any inquiry “filled up with lawyers and looking for fault”.

“I want it to be one where we actually say, ‘Look, we are trying to learn from this,’ because by the time it’s set up we would have had an election, so the public will have made their choices about who was to blame and who wasn’t.”

When asked about the lessons from this year’s vaccine rollout, Professor Duckett criticised “the very narrow range of vaccine choices” and messaging that contributed to the AstraZeneca vaccine developing a bad reputation with the public.

A request to interview Professor Sutton was declined by the Victorian Health Department, but Professor Duckett said he had sought to involve the high-profile Chief Health Officer in the editorial, as he wanted to write it with someone who had been “in the thick of it”.

Professor Duckett said Victoria’s Chief Health Officer was particularly concerned about the uneven impacts of COVID-19, which have been evident in the two main waves in Victoria, when the virus has taken hold in poorer areas of suburban Melbourne that are home to bigger families and more essential workers.

“The real lesson of the pandemic … is the huge impact of inequality and structural disadvantage on its course and outcomes,” the editorial says. “It is convenient to imagine that respiratory viruses are randomly transmitted from one person to another.

“The reality is that they find all the social, demographic, and economic vulnerabilities within and between populations: differential effects related to sex, overcrowding, essential but casualised work, public housing, homelessness, poverty, poor health literacy, cultural marginalisation, and stigmatisation.”

Gerard FitzGerald, a former Queensland chief health officer and emeritus professor of public health at the Queensland University of Technology, said the recovery phase in any disaster was the most important phase, and often lasted longer than the event itself.

“What we say in disaster management is you often can’t do much about the initial disaster and its impact, but you can prevent the secondary disaster [of] people suffering through the recovery phase,” he said.

Professor FitzGerald said people would be suffering long-term impacts of COVID-19 and the health system would need to cope with delayed operations and conditions that had been missed.

“I can’t imagine the number of businesses that have gone out of business during this event,” he added.

For some people who lost loved ones, their recovery may never be complete, but Professor FitzGerald estimated the recovery period for COVID-19 would need to be about three to five years, depending on whether the disease lingered or was eliminated.

The former commissioner of the Queensland Ambulance Service said he was not a fan of royal commissions but it would be important through other inquiries to reflect on better ways of doing things, pointing to the initial shortages of personal protective equipment as an example of Australia’s overreliance on international supply chains.

Professor Duckett – a former Australian Health Department secretary under a Labor government led by Paul Keating – said one of the key policy challenges for Australia would be its responsibility to its neighbours.

“It is in our interest to make sure Papua New Guinea is vaccinated, for example. It’s in our interest to make sure Indonesia is vaccinated. Because if the virus spreads out of control in these places, there is an increased risk of mutation. So we have, as well as a moral obligation, a direct personal interest in actually addressing the spread of the virus outside of Australia.”

A spokesperson for the Prime Minister’s office declined to comment before the journal article was published.