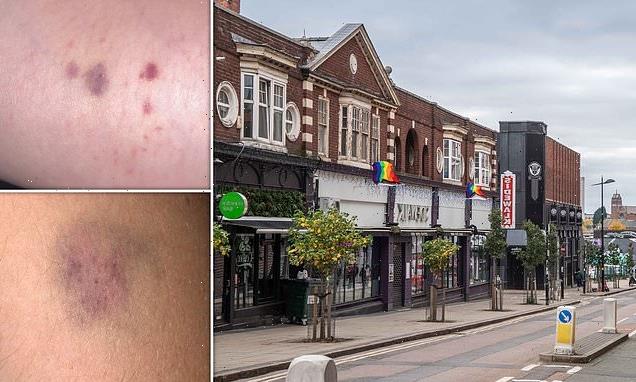 A ‘traumatised’ university student claims she and two friends were left ‘wiped out and sweating excessively’ after they were ‘spiked by injection’ on a night out in Birmingham’s Gay Village as police launch an investigation into the report.

Three friends, two aged 19 and one aged 20, woke up the next morning from a night-out feeling extremely tired and discovered the bruises on their arms with what looked to them like pin-pricks.

The University of Birmingham students also could not recall their previous night out and had excessive sweating, which they thought must be from a spiking.

After being at A&E for blood tests and hepatitis jabs, one of the young women, who suffers with health anxiety, described Friday’s experience as ‘traumatising’.

The student also said her ‘heart dropped’ after discovering what she believes is a pin prick hole in the arm of her leather jacket. 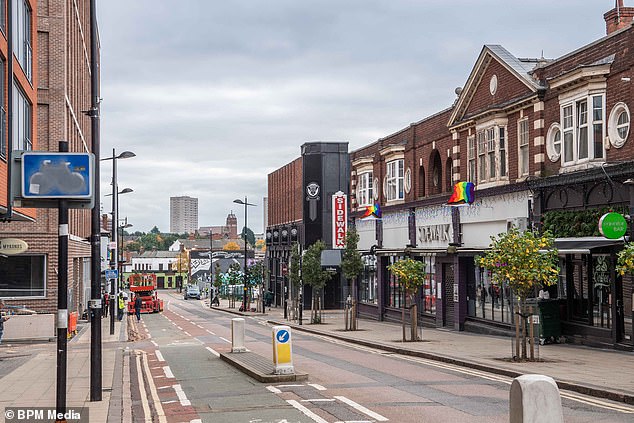 A ‘traumatised’ university student claims she and two friends were left ‘wiped out and sweating excessively’ after they were ‘spiked by injection’ on a night out in Birmingham’s Gay Village, pictured. It’s not clear which bar the students were at during the ‘spiking’

Yes – and there are credible reports where people have woken up with needle marks having been spiked.

But the likelihood of a widespread phenomena is ‘deeply improbable’, a medical consultant said.

‘It’s really hard to stick a needle in someone without them noticing, especially if you have to keep the needle in there for long enough, maybe 20 seconds, to inject enough drugs to cause this.’

Could someone not give the injection really fast?

Yes – but they’d need a very powerful drug to do so discreetly, experts say.

GHB is one of the most well-known ‘date rape’ drug and is also self-administered in small doses by people recreationally.

But Guy Jones, senior scientist at drugs charity the Loop, told VICE it would be a ‘poor candidate’ for injection because of the large amounts of fluid needed.

‘Therefore (it would require) a thick, painful needle. This means that the substance involved would be something that would be highly detectable for several days in a toxicology screening,’ he said.

Adam Winstock, director of the Global Drug Survey, added: ‘There are very few easily accessible drugs / medicines that could be given intramuscular in a small enough volume that people would not notice and the effects would take some time to come on.

‘What you see in the movies is not reality. People need to keep their drinks close to them, avoid taking them from strangers and keep an eye out for their mates.’

Can drugs be administered to any part of the body?

Yes – but some parts are more effective than others

Mr Jones told VICE: ‘Where drugs can be injected non-intravenously, there are specific injection sites that do not work well.

‘The back is one of these unsuitable sites due to the low fat-muscle content, and high concentration of pain receptors.’

What about drink spiking?

While injection spiking is still possible, drink spiking is a lot more common.

This is only the officially recorded numbers – and is likely to be much higher as it is common for people not to report it to police.

Charity Drinkaware advise: ‘Don’t accept a drink from someone you don’t know and if they’re available, use drink stoppers, which can be purchased online, for the top of your bottle.’

Rohypnol (or Roofie) and Gamma Hydroxybutyrate (GHB) are the most commonly known ‘date-rape’ drugs.

It is not clear which bar the students, in a group of seven, were at during their night out in Birmingham’s Gay Village.

A student, who asked not to be named said: ‘It felt like quite a unique experience because it’s not like I noticed anything different.

‘My night was pretty normal, until the morning I felt I’d got a bruise on my arm.’

A friend then explained how she felt she had been ‘spiked on the night out’, but ‘couldn’t remember a thing’.

She was the first to visit A&E and report she had been spiked to hospital staff.

She said: ‘She wasn’t unconscious or anything but she was acting out of character.

‘Usually, she’s bubbly, kind, never starts an argument. She was getting quite argumentative and running away.

‘She couldn’t remember anything she had done, people were telling her things she’d done on the night and she couldn’t recall any of it, which is unlike her.

‘We all felt awful but we thought: ‘Maybe it’s just a hangover’.

‘The entire day was wiped out, I was exhausted and excessively sweating, it was like cold sweats and I was constantly sleeping.

‘I felt really weak, my arm was killing me. I dismissed it as if I’d accidentally bruised it because I didn’t black out.’

Her friend later called to tell her a second pal had also discovered a bruise on her arm.

And upon closer inspection of her own bruise, she found a mark ‘where a pin prick could have been’.

She said: ‘I was so confused because I was wearing a jacket the entire night.

‘So then I looked through my jacket and I found a pin prick hole where my bruise was in the jacket – my heart just dropped.

‘Before I was invalidating it a bit because I hadn’t had the experience of feeling out of it.

‘My arm had been hurting all day but I just dismissed it. I have quite bad health anxiety so this is literally traumatising.’

The two friends travelled to A&E at the Queen Elizabeth Hospital Birmingham.

She added: ‘They were really lovely and took us really seriously.

‘I got my hep B jab on the other arm, but my spiked arm is hurting more than it has been for the past two days.

‘That’s how I definitely know it’s a spike mark, it would be better by now if it was just a bruise.

‘Both my friends didn’t know they had been injected until the next day, which is terrifying.

‘When I spoke to the people at A&E they said: ‘Most shifts there is at least one person that comes in’.

‘I was like: ‘That is awful, why is nothing being done about this?’

West Midlands Police said it had launched an investigation after the three friends reported the incident to the force.

A spokeswoman for the force said: ‘We’re investigating a report of three women being spiked during a night out in Birmingham city centre on Friday (18 February).

‘The women – who are friends – all noticed bruising to their arms the following day. They also could not recall events from the previous evening.

‘This led them to believe they had been spiked and report this to us.

Further enquiries will be carried out.

Following a nationwide spiking ‘epidemic’ in recent months, Priti Patel says she will make drink spiking a criminal offence in a bid to crack down on sexual predators.

The Home Secretary is set to introduce a law targeting anyone who gives a substance to someone without their consent, ‘regardless of a perpetrator’s motivation’.

West Midlands Police said it had launched an investigation after the three friends reported the incident to the force. The two friends travelled to A&E at the Queen Elizabeth Hospital Birmingham. Pictured the bruises on their arms

Opposition peers passed an amendment to the Police, Crime, Sentencing and Courts Bill in the House of Lords committing them to reviewing spiking under the Sexual Offences Act.

Ms Patel said she would not ‘hesitate’ to bring in new laws in a bid to protect victims, after figures showed spiking offences made up more than one in 10 of all crimes classed as ‘violence with injury’.

She told The Times: ‘Our response to such appalling acts must be as robust as possible to ensure that everyone is protected, regardless of a perpetrator’s motivation.

‘That’s why we are proposing a more wide-ranging review and, if there is a clear case for making spiking a standalone offence, then I will not hesitate to bring in new laws.’

A report by the West Midlands Police and Crime Commissioner found that spiking cases have surged in recent months due to ‘heightened awareness’ of the issue, with 95 offences recorded in November.

Only seven per cent of drinks that were reportedly spiked in the West Midlands resulted in a positive drugs test, police have also said.

Parents value honesty and kindness in their children above all else, research finds
World News