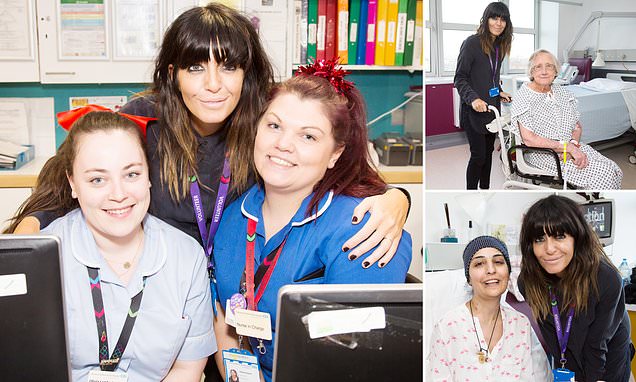 Claudia lends a hand: Inspired by the Mail’s hospital campaign, the Strictly Come Dancing host volunteers on an NHS ward

It’s a far cry from the sequins and sparkle of the Strictly studio.

But Claudia Winkleman had no qualms about rolling her sleeves up and getting stuck in when she spent the afternoon helping out at Chelsea and Westminster Hospital.

The BBC presenter wanted to give a few hours of her spare time to the NHS after reading about the Daily Mail’s Christmas campaign to recruit more volunteers.

Inspired by the pledges of thousands of readers, she fetched coffees, pushed patients in wheelchairs, made beds, scrubbed a mattress and even checked heart rates during her three-hour stint on the wards at the hospital in west London. 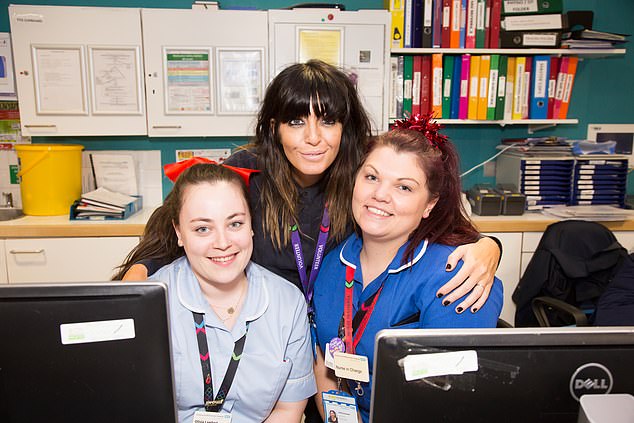 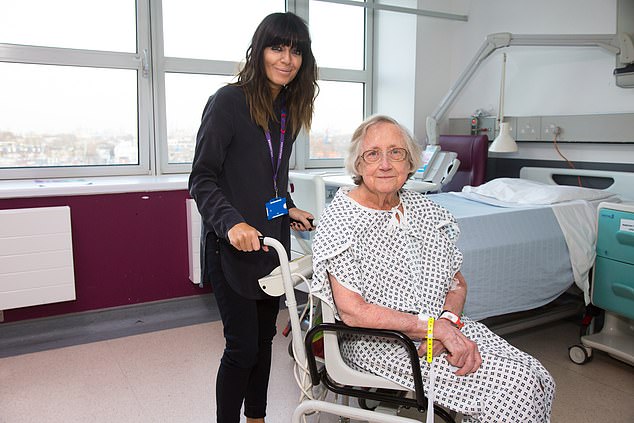 ‘There aren’t many things that absolutely spring out at me but the Helpforce campaign with the Daily Mail seems like the most brilliant idea in the whole world,’ she said.

‘Who wouldn’t want a visit when you’re in hospital? As soon as I arrived at the Chelsea and Westminster they said “can you pass some tea round?”, so straight away you’re in there with drinks, talking to patients, then you’re making beds, then you’re offering lunch or supper.’

The Mail and charity Helpforce are asking readers to pledge three hours a week or one day a month to their local NHS for six months.

The campaign has received backing from a host of celebrities including JK Rowling and Sir Cliff Richard, alongside Theresa May and Simon Stevens, the chief executive of NHS England.

Taking patients to cinema helps me and them

Ian Chandler, 63, a retired security guard, has volunteered at the cinema in London’s Chelsea and Westminster hospital for two years:

‘My mum Doris was in and out of Chelsea and Westminster so I’d spend quite a bit of time there. During one of her stays, I heard about the MediCinema charity, which builds and runs cinemas in hospitals for patients and their families. 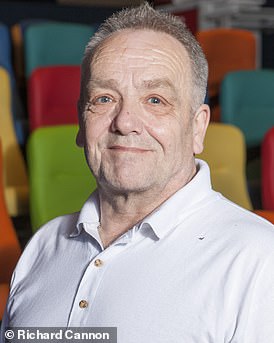 ‘Mum couldn’t go as she’d gone blind, but the hospital said I was welcome. Going to the hospital cinema gave me a break from the ward and worrying how ill mum was – I’d been her carer for five years.

‘It was lovely to see patients of all ages having such a nice time there and when I discovered that they were picked up from the wards by volunteers, sometimes even in their beds with drips still attached, I thought, “What a great thing to do.”

‘Mum’s death in January last year left a huge gap in my life – I’d given up my job of 32 years to look after her. I also wanted to give something back by way of thanks for the brilliant care she’d received, so I got in touch with the cinema manager.

‘I do two five-hour sessions a week, escorting patients and sitting with them during the film if they want company. Some are extremely ill but you wouldn’t know it in the cinema. They seem to forget about their troubles and just enjoy themselves.

‘We show all types of film – the latest releases, golden oldies, comedies and musicals. Sometimes film stars will do a Q&A session and give out toys. You should have seen the children’s faces when Chewbacca walked in. Moments like that are priceless.

‘When I see them smiling, I feel like I’ve achieved something worthwhile and leave with a great sense of satisfaction.’

So far, 22,742 kind-hearted readers have signed up since the recruitment drive was launched two weeks ago, pledging a combined total of 1,293,588 hours over six months. Some 13,191 people have promised to give three hours a week, while 9,551 have pledged one day a month.

They will carry out vital hospital roles such as mentoring patients, collecting prescriptions, providing friendship and even transporting blood.

Prospective volunteers can register their interest by filling out a simple form online.

They will be matched with an NHS Trust with placements likely to run from the spring. Applications are open until the end of the month.

Miss Winkleman wanted to do more than just offer her support, and asked if she could lend a hand to staff and patients at Chelsea and Westminster days ahead of tonight’s Strictly Come Dancing final.

She chatted to patients and met fans on St Mary Abbots Ward, a surgical assessment unit that specialises in gastroenterology and colorectal surgery. One patient, Imogen, 22, was thrilled when the star recorded a video message on her phone for her best friend Jess.

She said: ‘Jess is a huge fan of Strictly, she never misses it, so she’ll be amazed when she gets that message from Claudia.’

She also joined healthcare assistant Dan on his rounds as he took another patient’s blood pressure. Dimpy, 30, said: ‘You can tell by how fast my heart is beating how excited I am. You make me smile just by being here.’

Miss Winkleman, whose daughter Matilda needed burns treatment after her Halloween costume caught fire in 2014, heaped praise on the NHS. ‘I believe in the NHS more than I believe in anything,’ she said.

‘It has helped me, helped my family, helped so many friends of ours and I don’t want us to take it for granted. The people employed by the NHS work incredibly hard. The nurses I’ve seen working around me today put in long shifts and they never stop. They’re superheroes and I don’t use that term lightly. They show enormous kindness and sensitivity and are beacons of light in our darkest times.

‘I’m grateful to the NHS every single day, I’m happy to volunteer myself and wholeheartedly support hospital helpforce.’

The role of volunteering will be a key part of the NHS Long Term Plan, due out later this month.

There are obvious benefits to staff and patients, but Miss Winkleman said she also came away with a sense of well-being.

She said spending time with patients when they were being assessed, treated or recovering from an operation felt truly worthwhile.

‘When it came to doing work on the ward, I don’t think I was too much of a let-down with the cleaning and bed-making,’ Miss Winkleman said. ‘But it was the conversations I had with the patients that I really enjoyed and which I hope the patients enjoyed too. 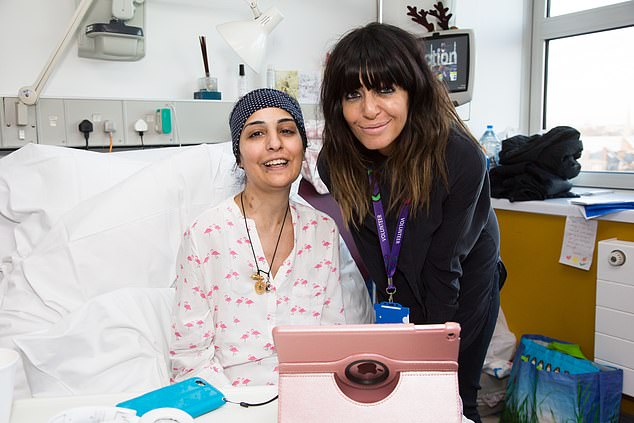 ‘I felt I connected with lots of them just through chatting and getting to know them in a very short space of time. Anyone can do the same, and brighten up somebody’s day, by signing up for the volunteer scheme.

‘It’s a privilege to help and support this brilliant campaign.

‘Any help we can give the NHS would be great, anything we can do to lighten their load by volunteering would be fantastic. I just want them to feel appreciated.’

Volunteering is paramount to making the NHS more transparent, according to the chairman of the Mid Staffordshire hospital inquiry.

Sir Robert Francis said volunteers improved ‘the understanding amongst the rest of us about what’s actually going on in there’.

He also said volunteers improved hospitals’ ‘humanity’ and ensured they could better respond to patients’ needs.

Sir Robert’s inquiry into the Mid Staffordshire hospitals scandal was published in 2013. Hundreds of patients died needlessly at the trust between 2005 and 2009.

Some were left so dehydrated they drank water from vases and doctors admitted they became ‘immune to the sound of pain.’

Sir Robert’s inquiry prompted major reforms of the NHS to undo the culture of secrecy and encourage doctors and nurses to report concerns. He has now thrown his weight behind the Mail’s Christmas campaign.

He said the Mid Staffordshire hospitals had very strict visiting hours and ‘kept the outside world out’. An organisation that ‘welcomes people in to help … is less likely to be a place where things go wrong’, he said.

Referring to the benefits of volunteering, Sir Robert said: ‘Not only does it provide extra helping hands, and helps with the humanity, but it helps with the transparency.

Sir Robert is now chairman of Healthwatch, a charity which recruits volunteers to find out what patients think about their local hospital or health service.

He said: ‘We’re not asking people to volunteer to be the regulator but it’s simply that any member of the public … should feel free to raise the issues and make suggestions about how things could be made better.’ He added: ‘People can bring to the service so many things, they can bring their help, they can bring experience and they can bring views.’