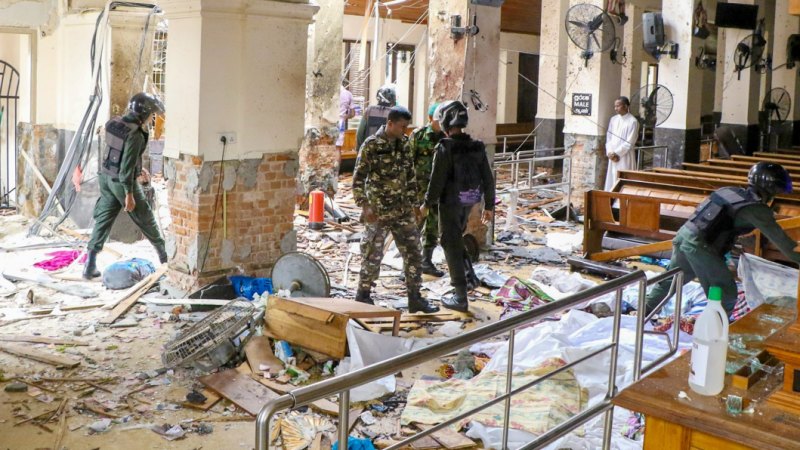 Colombo: Sri Lanka has asked the world for help in investigating possible involvement by international terrorist groups in one of Asia's deadliest terrorist attacks in years, detaining 13 suspects and carefully managing information.

More than 200 people died in coordinated blasts on Easter Sunday at churches and luxury hotels, some of which involved suicide bombers. Authorities haven't revealed information on who may be responsible for the strikes, which targeted foreign tourists and Christians – marking a shift from the violence that fuelled a three-decade civil war on the Indian Ocean island. 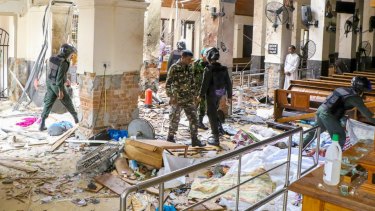 Sri Lanka needs assistance from security officials abroad to "check foreign links of these groups," Prime Minister Ranil Wickremesinghe said in an address to the nation late on Sunday, local time, without providing more details. "We have to look deeper into this, but the first task is to make sure that the country is not destabilised."

He earlier said the government had 10 days' notice that an attack were imminent but there was an inadequate response from emergency services and the military. The Prime Minister called for an inquiry into how the information was used,

A sense of unease pervades the nation following a period of relative calm in the decade since the end of a brutal conflict between the predominantly Buddhist Sinhalese majority and mostly Hindu Tamil minority.

No one has claimed responsibility for the attacks, which also injured at least 450 people.

Most foreigners were hurt at the Shangri-La, Kingsbury and Cinnamon Grand hotels in Colombo. Several blasts occurred hours after the first explosions on Sunday, and experts detonated a pipe bomb found on a road near Colombo's airport. Authorities imposed a nationwide curfew and blocked platforms like Facebook, YouTube, WhatsApp, Instagram, Snapchat and Viber.

The Colombo Stock Exchange put its Monday opening on hold and schools will remain closed until Wednesday. SriLankan Airlines advised travellers to arrive four hours before their flights to undergo additional security checks.

US President Donald Trump condemned the "terrorist attack" and offered help. Secretary of State Mike Pompeo confirmed that Americans were among the dead, while other reports named victims from India, Portugal, Turkey, the UK, Netherlands, China and Japan. 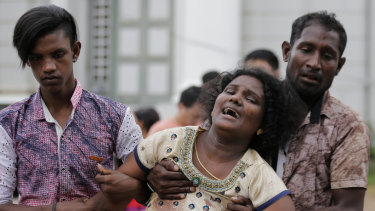 Relatives of a blast victim grieve outside a morgue in Colombo, Sri Lanka. Credit:AP

The attacks will test a government that's reeling from a political crisis last year that has weighed on the economy and led to downgrades in Sri Lanka's credit rating.

"What these bombings potentially do is take it from inertia and political infighting and rudderlessness to a real fear of instability and a sense of a return to the bad old days," said Alan Keenan, a senior Sri Lanka analyst with the International Crisis Group based in London.

"It's striking that in almost three decades of war between the Tamils and government forces, foreign tourists were never targeted."

Catholics, split between the Sinhalese and Tamils, make up 6.5 per cent of Sri Lanka's population, according to the nation's 2012 census. Buddhists account for 70 per cent of the total, while Hindus and Muslims make up the rest. 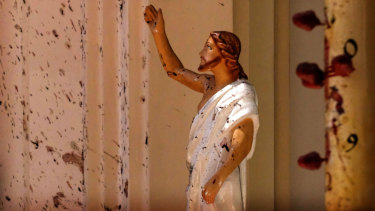 Blood stains are seen on the wall and on a Jesus Christ statue at the St Sebastian’s Church after a blast in Negombo, north of Colombo, Sri Lanka.Credit:AP

In the early 1980s, the Liberation Tigers of Tamil Eelam – known as the Tamil Tigers — began fighting for an independent homeland in the north and east of Sri Lanka. The conflict, marked by the use of child soldiers and human-rights violations on both sides, killed more than 100,000 people before former strongman Mahinda Rajapaksa's government won a decisive victory in 2009.

Rajapaksa has been a key player in Sri Lanka's political fighting over the past six months. Last October, he was suddenly appointed prime minister by President Maithripala Sirisena, leading to a constitutional crisis. Wickremesinghe, the deposed prime minister, was reinstated in December after a Supreme Court decision.

It remains to be seen whether Sri Lanka's politicians will unite in the face of the attacks, which threaten to further hurt economic growth. Wickremesinghe warned that tourism would suffer and investors may pull money from the country.

Sri Lanka's economy has struggled in recent years, forcing the government to take out a $US1.5 billion ($2.1 billion) loan from the International Monetary Fund. Economic growth in the quarter to December was the slowest in 19 quarters. The rupee dropped to consecutive record lows last year amid the political crisis, before recovering this year.

"That is bad news for the country where the memories of the civil war are still very much alive," said Raffaele Bertoni, head of debt-capital markets at Gulf Investment Corp. in Kuwait City. "Tourism is a very important sector for the economy and one of the major source of external reserves."

Sri Lanka has a history of communal violence between virtually all groups, according to Keenan from Crisis Group.

"What's surprising about this is the particularly brutal and coordinated nature of the attacks and targets, this combination of what appear to be Tamil Catholic churches and high-end hotels," he said. "These are the first classically terrorist attacks since the end of the war."

Florence & the Machine Premiere New Song on ‘Game of Thrones’