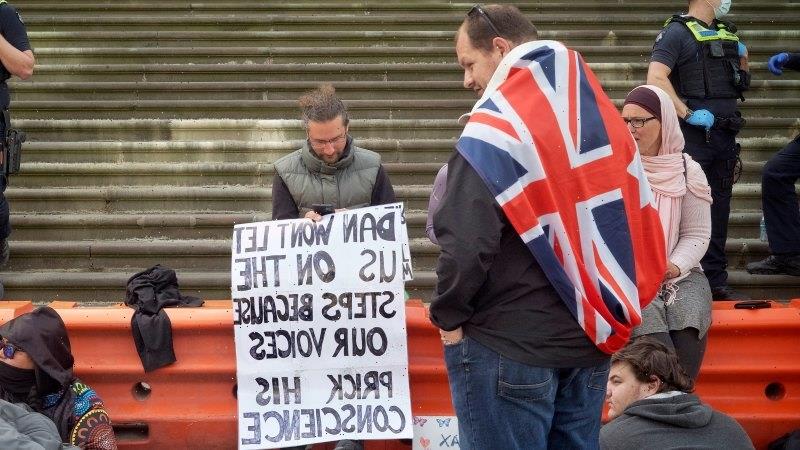 As tense negotiations over Victoria’s controversial pandemic bill continued inside Parliament House late on Thursday, the chanting from protesters on the steps outside subsided to the occasional call for “freedom”.

After four nights camped on the Spring Street steps, the crowd vowed to continue their demonstration. But aside from the regular honking of passing car horns, the chants and singalongs that had punctuated the previous few days began to dull. 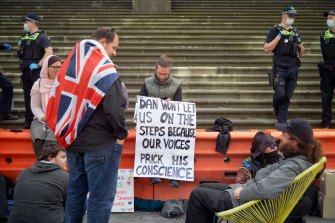 People protest against the pandemic bill outside the Victorian Parliament on Thursday.Credit:Luis Enrique Ascui

“What do we want? Freedom,” one man occasionally called through a megaphone.

Earlier in the day, as Premier Daniel Andrews announced an easing of COVID-19 restrictions inside Parliament House – effectively giving Victorians back many of the freedoms they lost during months of lockdown – there was little reaction from those sitting on the building’s front steps.

“Kill the bill” and “sack Dan Andrews” continued to be chanted occasionally as protester numbers fluctuated between 100 and 200 for most of the day, but peaceful scenes and a sense of camaraderie replaced the forceful speeches of previous days.

Orange plastic barriers were installed 24 hours earlier to restrict the crowd to the lower tier of the steps, and while numbers ballooned overnight to a few hundred, the crowd reduced during the early hours, as police with video cameras watched.

A steady stream of cars honked their horns throughout the morning, including a silver Ford bearing small Australian flags, which prompted cheering from the protesters.

During intermittent speeches, some called out The Age report that identified a far-right element among this week’s protests. Some swiftly shut that down as false, telling fellow protesters a large number of the gathering had never been to a protest before this week.

The previous day, Carolyn (who asked her surname be withheld) said she did not want to be camping outside Parliament. 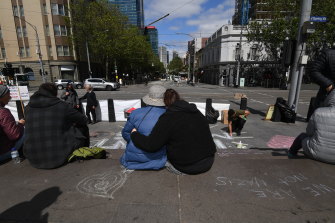 Carolyn (right) among other protesters camped on the stairs of Parliament House.Credit:Joe Armao

“These changes have left a lot of us feeling segregated, shunned from society.”

The teacher of 13 years said she travelled in from Melbourne’s western suburbs after losing her job because she chose not to get vaccinated against COVID-19.

“I never thought I’d be doing this; sleeping out on the street to feel our voices can be heard, but a lot of us are feeling cast out from society. I wake up every day thinking ‘how are we still in this nightmare?’.”

She and others in the crowd, condemned the violent element added to the protests by those demonstrators who gathered around wooden gallows on Monday night calling for the Premier to go and chanting “kill Dan Andrews”.

Then, overnight on Wednesday, footage emerged on social media of a makeshift shiv allegedly found a few metres from the protests camp, sparking safety fears among those sleeping out.

Online, freedom protesters forecast that any delay to the pandemic bill voting would give them a “window of opportunity” to build a bigger, louder protest on Saturday when they expect thousands will march through the city streets again.

Fascinating answers to perplexing questions delivered to your inbox every week. Sign up to get our new Explainer newsletter here.

Spoilers: Roy and Abi are responsible for Natasha's death in Corrie
World News