The Spanish government has promised court action against at least 17 airlines including easyJet and Ryanair over their customer refund practices following the Covid-19 outbreak.

The budget airlines are among those who have come in for huge criticism over the way they have promoted free flight switches and vouchers ahead of cash refunds and the time they have taken to give people who insist on refunds their money back.

The country’s Ministry of Consumer Affairs threatened legal action a few days ago.

And yesterday it made good on its pledge by announcing it would file a formal complaint against at least 17 airlines over their ‘deceptive’ business practices.

The government department will accuse the airlines of hiding information from customers about their EU-protected rights to a refund after flights are cancelled.

The Ministry of Consumer Affairs will name easyJet and Ryanair in its complaint. 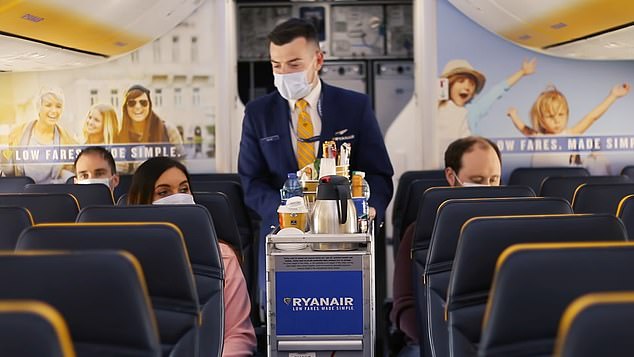 Pictured: A flight attendant dispenses drinks in a video to promote Ryanair’s return to the skies from July 1. Ryanair and easyJet face legal action from Spanish authorities for allegedly hiding information about the availability of cash refunds for flights cancelled due to the ongoing coronavirus pandemic

The government department said it was taking legal action to get the airlines to stop their practices ‘now and in the future.’

It is also expected to ask the courts to nullify contracts where customers have accepted vouchers as a substitute to a cash refund in cases where airlines have not informed them they had the right to money back and sold vouchers as the sole option.

‘When an airline cancels a flight, the customer has the right to receive a refund in the seven days after he or she requests it.

‘At the moment we have ample evidence this right is not being able to be exercised.

‘The airline has the right to offer a voucher but what is very clear in the European legislation is that the consumer has the last word.

‘If the consumer prefers a cash refund, he or she should have an easy and flexible way of asking for it and the companies should send it in seven days.’ 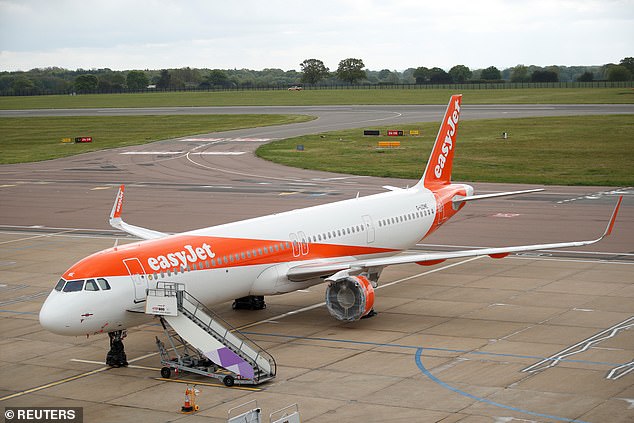 An EasyJet plane is seen at Luton Airport, following the outbreak of the coronavirus disease (COVID-19), Luton, Britain, May 1, 2020

It is understood Spain’s Consumer Ministry will seek legal backing for a ‘Cease and Desist’ style order against the airlines.

Ryanair was recently named as the worst major airline for refunding British customers whose flights have been cancelled during the coronavirus pandemic, with more than eight out of 10 people still waiting for their money back according to figures from Which?

It found 84 per cent of Ryanair customers it surveyed in the UK have not received a refund as requested, compared with 23 per cent at British Airways and 19 per cent at Jet2.

Sixty per cent of easyJet customers surveyed were still waiting for their money back, according to the consumer group.

A refund request form on easyJet’s site starts with the words: ‘Many of our customers are choosing not to wait, instead opting for a fight voucher which can be automatically issued for the full value of your booking.’

Customers with cancelled European flights are still being directed online to a ‘Manage Booking’ section which says: ‘Please select a new flight or request a voucher.

‘We are very sorry for the disruption to your flight and apologise for the inconvenience this will have caused you.’

The message goes on to offer a switch to other easyJet flights within Europe at any other time ‘for free’ and adds: ‘Claim a voucher for the full value of your ticket. Valid for 12 months with the flexibility to book travel to anywhere when you’re ready to fly.’

A link to a flight refund option is further down the page and eventually gets you to the airline’s refund application form, but not before a pop-up with the message ‘Are you sure?’ and the claim customers opting to take a flight voucher ‘get more.’

A spokesman for Ryanair said in a statement: ‘Ryanair has already processed EUROS 400m in refunds since mid-March, which is over one third of the total backlog.

‘We encourage customers to use their voucher or request a free move, as Ryanair has over 1,000 daily flights available from 1 July and has already released part if its summer 2021 schedule.

‘All Ryanair customers on cancelled flights can still apply for a cash refund if they so wish’.

There was no immediate response to a request for a comment from easyJet.