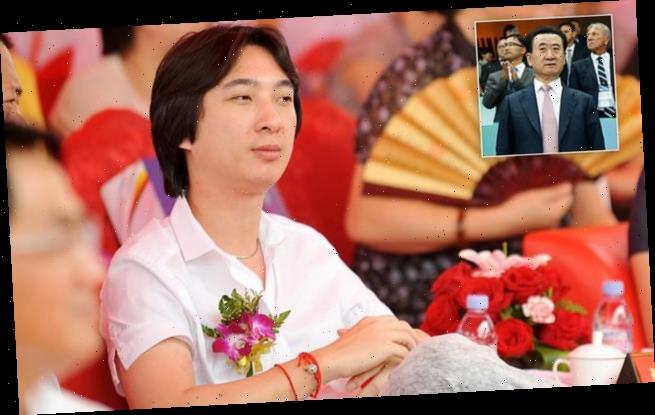 Son of Chinese billionaire is blacklisted by social credit system

The son of a Chinese billionaire has been stripped of his rights to have a high-rolling lifestyle by a court in accordance with the country’s social credit system after failing to obey a court order.

UK-educated Wang Sicong, the only child of mega-rich property magnate Wang Jianlin, has been banned from flying first class, buying luxury goods, taking high-speed trains and going on holiday after refusing to pay £414,000 debt, according to a district court in Shanghai.

The 31-year-old, famous for buying eight iPhone 7s and two Apple Watches for his pet dog, has also been barred from staying in high-end hotels, clubbing, playing golf, buying properties and cars, renting upscale offices, among others, a court notice says. 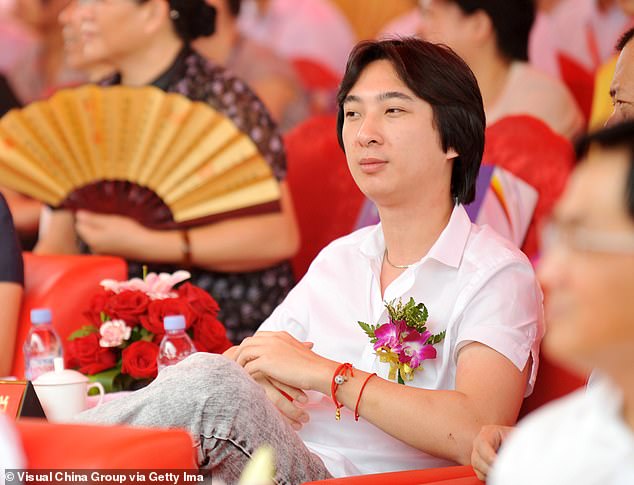 Wang Sicong (pictured in 2011), the son of mega-rich property tycoon Wang Jianlin, has been banned from living a luxurious life after one of his companies failed to obey a court order

The news came after Sicong was last week listed as a debtor owing at least 150 million yuan (£16.7 million) by a court in Beijing in a separate case.

It is understood he is yet to be discredited by the national system. However, he could be declared a ‘deadbeat’ and face detention should he disobey the order.

Sicong’s 65-year-old father Jianlin is worth $12.6 billion (£9.9 billion) according to Forbes. The self-made tycoon founded China’s largest real estate development company Dalian Wanda Group and was the country’s richest man for many years.

A successful businessman in his own right, Sicong was one of the richest entrepreneurs under the age 30 in China and estimated to be worth 6.3 billion yuan (£704 million) in 2017.

The severe punishment was handed to the pampered princeling last month after one of the companies he owns had refused to follow the court’s ruling.

The court said he had failed to issue a 3.6 million yuan (£400,000) in compensation to a business competitor in a lawsuit related to the employment of one of Sicong’s staff who used to work for his rival.

Sicong’s company said he was dealing with the matter and would solve the problem as soon as possible. 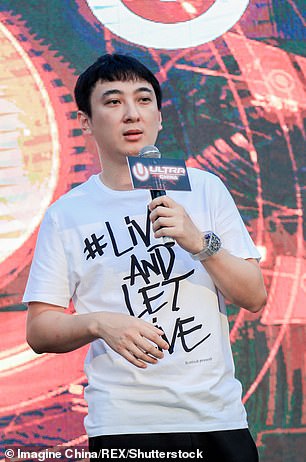 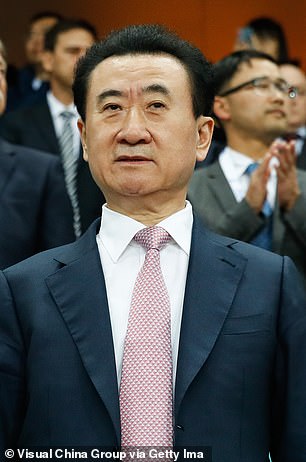 Sicong’s 65-year-old father Jianlin (right) is worth $12.6 billion (£9.9 billion) according to Forbes. The self-made tycoon was the country’s richest man for many years. In 2009, a 21-year-old Sicong was handed £53 million by his mega-rich father to start his own business

As China’s most eligible bachelor, Sicong is a darling of tabloids due to his enviable lifestyle.

Like most privileged children of the super-rich, Sicong was educated abroad – first at a primary school in Singapore and then at £41,000-a-year Winchester College – one of England’s top public schools – and then onto University College London where he studied philosophy.

His dog, Coco the Alaskan Malamute, lives an extravagant life most men can only dream of.

The pet’s assets include two £800 Apple Watches, eight iPhone 7s, a Fendi handbag and a Hermes leather leash and wads of cash. She even has her own private jet and chauffeur. 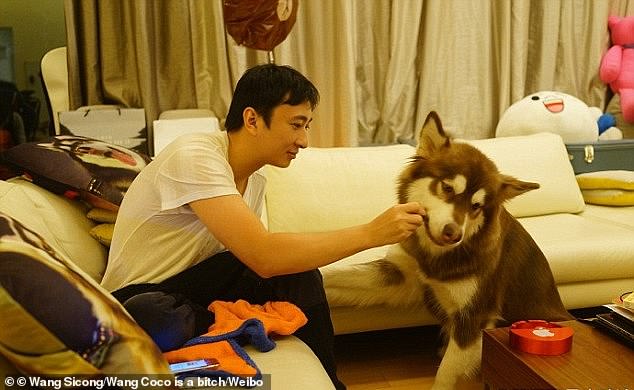 Sicong is known for showering his pet dog, Coco the Alaskan Malamute, with gifts and cash 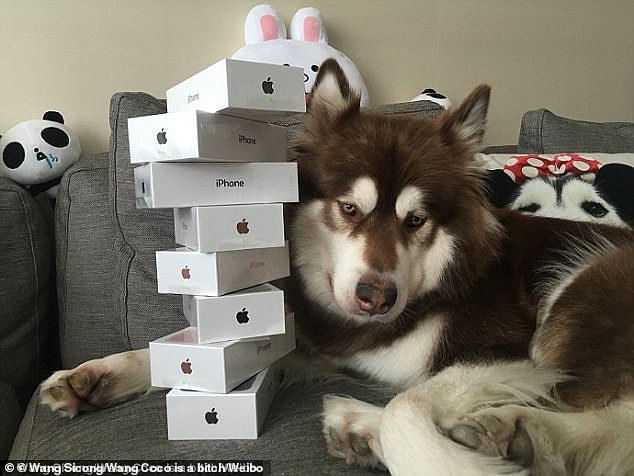 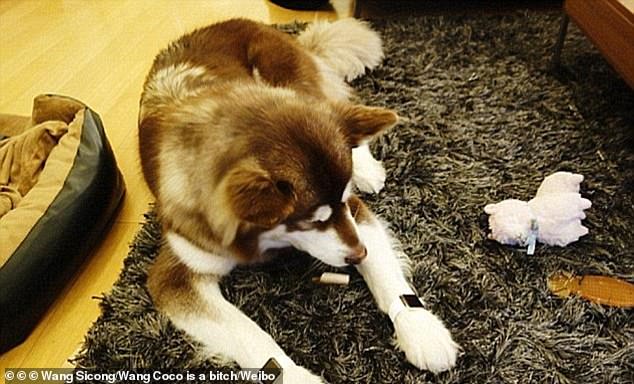 In 2009, Sicong was handed a gilded position in the Dalian Wanda conglomerate by his father – and £53 million to start his own business.

‘I told him I would allow him to fail twice. If he fails for the third time, he would have to come back and work in my company earnestly,’ his father told China Central Television.

He set up Pusi Capital, a private equity firm based in capital city Beijing, to invest in projects and companies he likes.

The firm that got Sicong into trouble, called Panda TV, was founded by the wealthy young businessman in 2015 to run a live-streaming video platform.

In response to the controversy, Pusi Capital said the matter was caused by the fact that Panda TV had gone bankrupt.

Pusi said in a statement from yesterday that Sicong was dealing with the matter and would solve the problem as soon as possible.

Sicong is the second high-profile name to be penalised by China’s controversial social credit system.

Earlier this year, US-raised actress and former beauty queen Michelle Ye Xuan was banned from travelling out of China after being blacklisted by the social credit system for failing to apologise to her love rival in a defamation lawsuit. 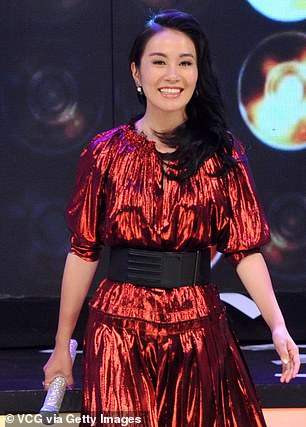 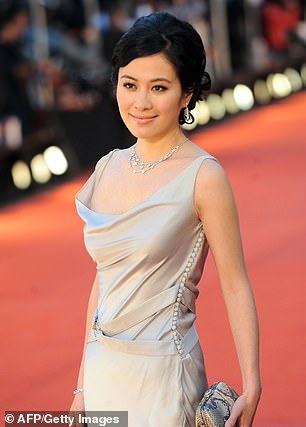 China-born, U.S.-raised Michelle Ye Xuan is the first high-profile figure to be punished by Beijing’s controversial social credit system since it was launched in 2014. The star is pictured at a film premier in Beijing in 2014 (left) and at the Hong Kong Film Awards in 2010. 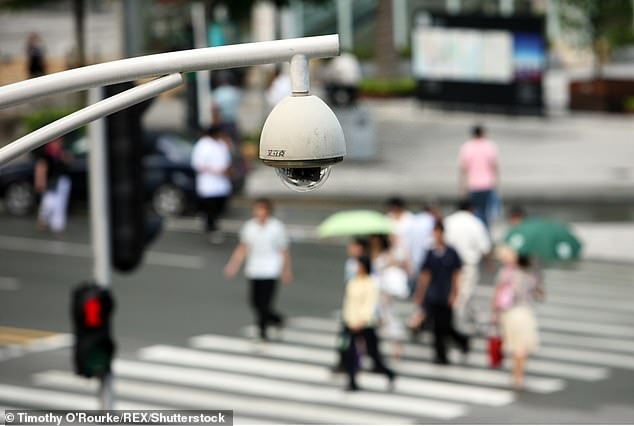 China is ready to finish building its Big-Brother-style surveillance network next year, which is set to have some 626 million CCTV street cameras, or one camera for nearly every two people

Set to be launched next year, China’s social credit system rates all citizens and companies based on their daily behaviour ranging from financial records to social media activities to abilities to follow law.

The system is facilitated by the ‘big data’ technology, which is part of Beijing’s 13th five-year plan.

Big data is, in turn, backed by China’s ever-expanding national surveillance network which is set to have more than 600 million street cameras by 2020.

The nation-wide initiative will help the country restore morality, according to China’s state-run newspaper Global Times.