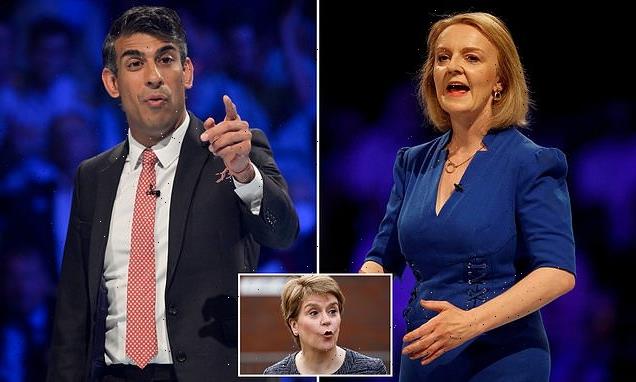 Rishi Sunak today insisted he would not ignore Nicola Sturgeon – after Liz Truss said she would – and accused his leadership rival of having no plan to defeat the First Minister and the independence movement who said the Foreign Secretary was ‘holding Scotland in contempt’.

Ms Truss also branded Nicola Sturgeon an ‘attention seeker’ – sparking fury with the SNP who said they and the Scottish people were ‘insulted’ and ‘absolutely horrified’.

The former chancellor has now dismissed Foreign Secretary’s controversial comments made in Exeter last night and said it is ‘not good enough to simply ignore the SNP when we need a plan to beat them’.

Mr Sunak believes that ‘confronting the nationalists and beating them at the ballot box’ is the only way to defeat Ms Sturgeon and the SNP.

Deputy First Minister John Swinney said her comments were ‘deeply troubling and concerning’, adding that people in Scotland, regardless of political opinion, will be ‘really concerned, and in many cases, insulted’.

He said: ‘Nicola Sturgeon has far more democratic legitimacy than Liz Truss is going to have if she becomes the prime minister, and I think Liz Truss has absolutely no right or foundation to make these remarks.’

SNP councillor Stefan Hoggan-Radu posted a message on social media saying: ‘How disrespectful and ignorant! Like her or not she is the democratically elected First Minister of Scotland with a larger mandate than any Tory Prime Minister!’ SNP minister Christina McKelvie said: ‘You watching Scotland … utterly disgraceful contempt for our democratically elected First Minister.’

Leadership hopeful Ms Truss made the comments at the Conservative hustings in Exeter last night and was swiftly backed by Jacob Rees-Mogg today who declared that Ms Sturgeon ‘waffles on endlessly’, is ‘very often wrong’, and is ‘always moaning’. 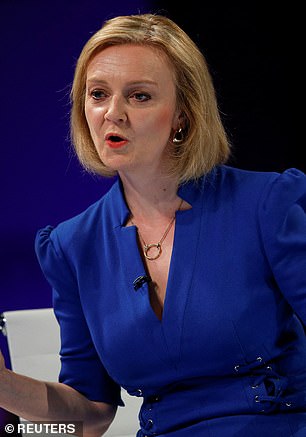 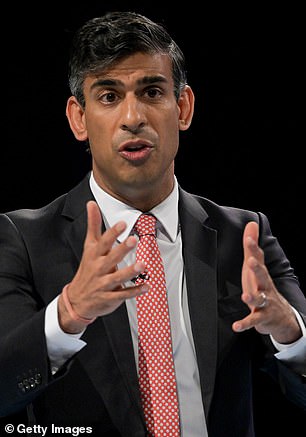 Conservative leadership candidate Liz Truss speaks during a hustings event in Exeter where she laid into the SNP leader Nicola Sturgeon. Rishi Sunak has now said his leadership rival has no plan to beat the First Minister 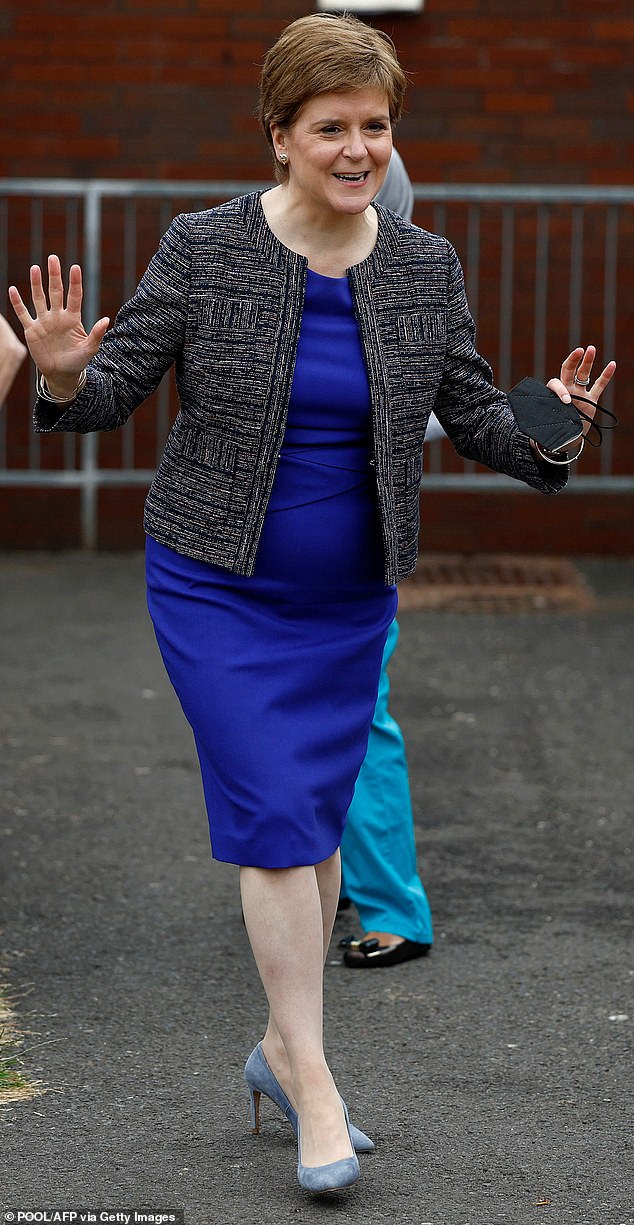 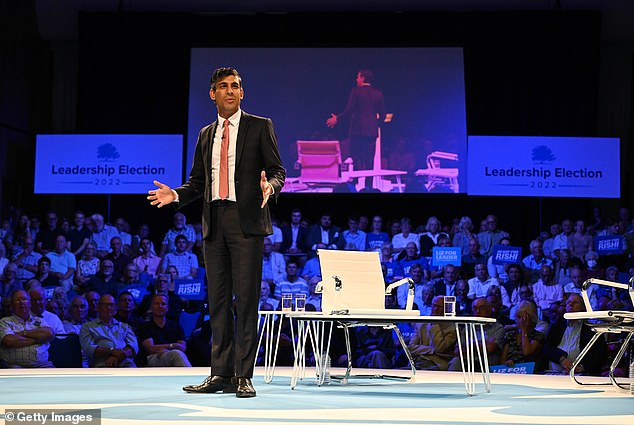 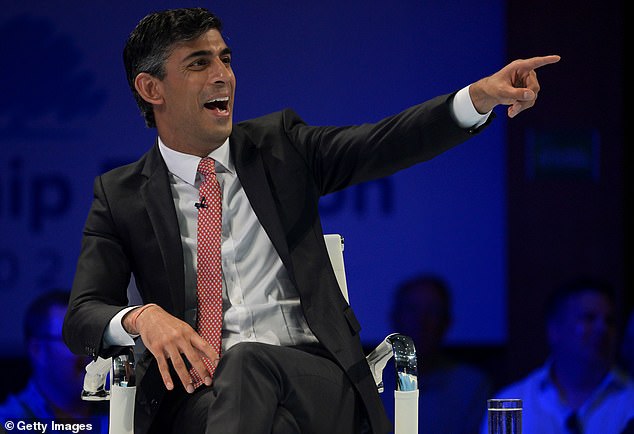 Liz Truss U-turned to scrap a major part of a proposed ‘war on Whitehall waste’ today after Tory critics warned it meant cutting the pay of millions of workers and lead to electoral disaster.

The Foreign Secretary announced last night plans to save up to £11billion with major reforms to Civil Service pay and conditions.

Some £8.8billion of savings was to come from axing national pay boards outside the South East and tailoring pay for new starters to reflect local private sector rates.

But in order to save the colossal sum experts said the scheme would have to reduce pay for all public sector workers – including teachers, nurses and soldiers – and not just civil servants. This was denied by Team Truss.

But she reversed the plan today after criticism from Northern Tories and supporters of Rishi Sunak over how it would be seen in the Red Wall seats the party took from Labour at the last election, at a time of growing cost-of-living fears.

Ben Houchen, the mayor of Tees Valley who is seen as a rising star of the party, said the plan could not be achieved ‘without a massive pay cut for 5.5m people including nurses, police officers and our armed forces outside London’ and warned it was ‘a ticking time bomb set by team Truss that will explode ahead of the next general election’.

A member of the audience had asked: ‘What are you going to do to get Scotland on board? Because I’m sick to death hearing about Nicola Sturgeon trying to break up the Union.’

The chairman of the hustings, Whitehall editor of the Financial Times Sebastian Payne, added: ‘The bond of the United Kingdom has weakened over the past 12 years of the Conservative government, and if you look at Northern Ireland or Scotland, independence is very much a question again. What is your plan to reverse that?’

In response, Ms Truss, who described herself as ‘a child of the Union’ said: ‘We’re better together and I think the best thing to do with Nicola Sturgeon is to ignore her.

Ms Truss, who grew up in Paisley, added: ‘Nicola Sturgeon can carry on talking about an independence referendum – we had the referendum in 2014 it was agreed it was once in a generation – so we’ve got to call her out on that but, at the same time, really delivering for Scotland. So some of the policies I’m talking about – the investment zones, the free ports – we need to make sure they’re delivered in Scotland too.’

Lorna Slater, co-leader of the Scottish Greens, said Liz Truss has shown ‘total disrespect’ to First Minister Nicola Sturgeon and ‘a contempt for everyone that voted for a pro-independence majority of MSPs in last year’s election’.

‘She knows that the democratic case for a referendum is unanswerable, so she would rather patronise us and ignore us,’ she said.

‘Neither Truss nor (Rishi) Sunak would offer the fresh start that we need. They have both backed every single disastrous policy that (Boris) Johnson has implemented.

‘They supported his failed Brexit deal and the Universal Credit cuts that plunged thousands of people into poverty.

‘They are both happy to let the oil and gas companies rake in record profits while millions of people are suffering.’

The row came as Penny Mordaunt last night threw her support behind Liz Truss in a major coup for the frontrunner’s leadership campaign.

The trade minister dramatically declared she was backing her former rival at the start of a hustings event for party members.

She had not been expected to endorse either finalist after coming third in the contest.

But taking to the stage in Exeter last night, she said the choice of the next Conservative Party leader was ‘too important’ to be left to chance.

She said she had decided to back Ms Truss, paying tribute to her ‘graft, her authenticity, her determination, her ambition for this country, her consistency and sense of duty’.

‘She knows what she believes in, and her resolve to stand up against tyranny and fight for freedom – that’s what our country stands for.

‘And that’s why I know with her we can win,’ Ms Mordaunt said. ‘She for me is the ‘hope’ candidate.’

Meanwhile Ms Truss secured more support from Holyrood than Rishi Sunak with nine MSPs writing a joint article stating that the Foreign Secretary will stand up for the Union and can trusted to deliver for Scotland.

It means she has now received more public declarations of support than the former Chancellor, who had initially secured the backing of a series of high-profile MSPs but has failed to add any in the last week.

Mr Zahawi praised her ‘booster’ approach to the economy in contrast to that of her ‘doomster’ rival Rishi Sunak. 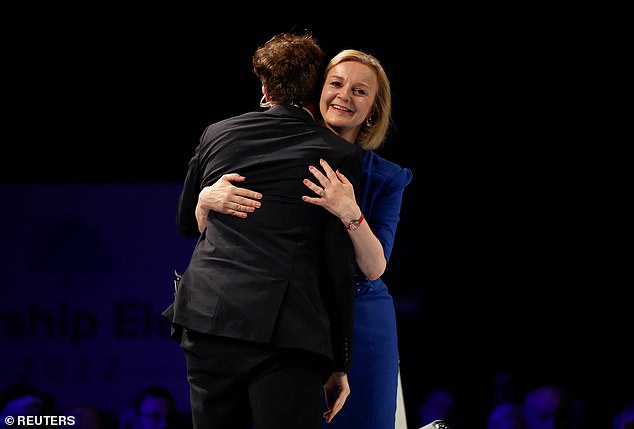 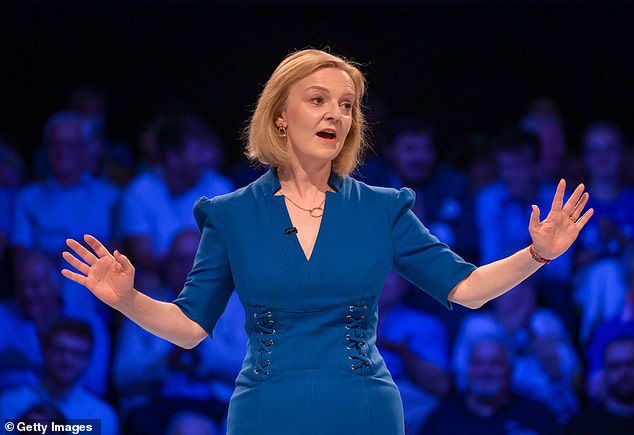 Ms Truss has also stated her intention to turn brownfield sites and other locations into ‘investment zones’, dubbed ‘full-fat freeports’. 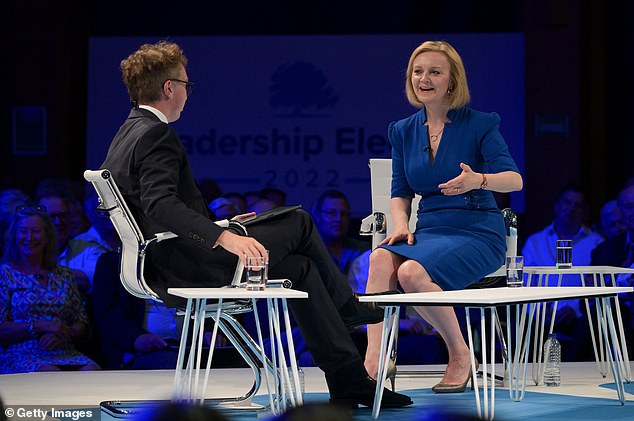 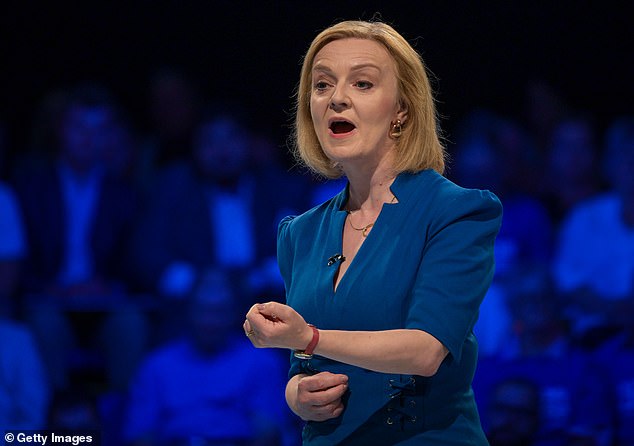 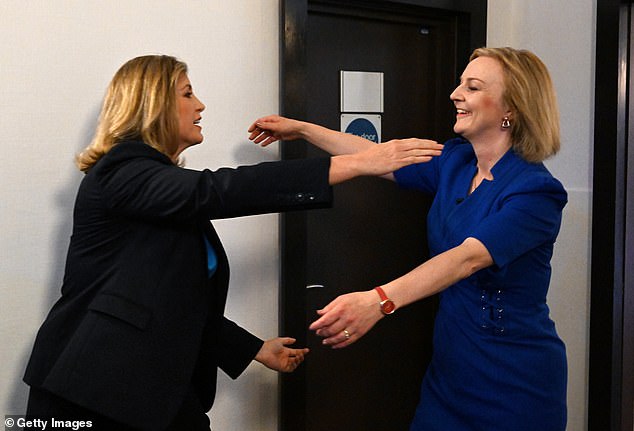 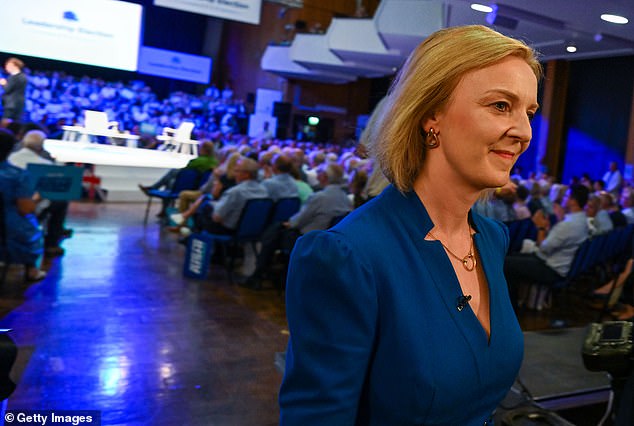 She has promised a ‘war on Whitehall waste’ to save £11 billion, cutting Civil Service time off and ending national pay deals. 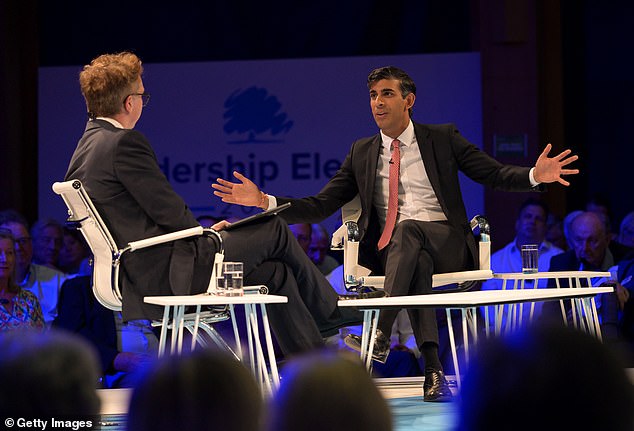 Rishi Sunak has re-iterated his support for the Government’s controversial Rwanda asylum policy, saying he would do ‘whatever it takes’ to get it up and running

Liz Truss’s campaign gathered more momentum yesterday as she secured the backing of another Cabinet Minister as well as a major group of Scottish Tories.

The leadership frontrunner’s ‘booster’ approach to the economy was contrasted with that of ‘doomster’ Rishi Sunak by new Chancellor Nadhim Zahawi.

‘Liz will overturn stale economic orthodoxy and run our economy in a Conservative way,’ he wrote in the Telegraph, as he became the tenth member of the current Cabinet to lend her his support, compared with eight for her rival.

Mr Zahawi – who previously claimed he would not endorse a candidate when he dropped out of the contest – added: ‘Liz’s plans for a low-tax economy that puts growth first are what we need.’

‘Liz will overturn stale economic orthodoxy and run our economy in a Conservative way,’ Mr Zahawi wrote in The Daily Telegraph, as he became the tenth member of the current Cabinet to back her, compared with eight for her rival.

Answering questions about her personal life, Ms Truss said she ‘shared the values’ of the Church of England but was not a regular worshipper.

Asked where the money was going to come from for her tax cuts and infrastructure investment, she replied: ‘Thriving enterprises, thriving businesses and economic growth’. She added: ‘If we tax people and businesses too much, and we’ve currently got the highest tax rates for 70 years in our country, we will throttle that growth.’

But she suggested she would offer her rival a role in Government if she became prime minister, saying: ‘Of course I would have Rishi Sunak as part of my team, he’s a fantastic guy and we need all of our best talent on the pitch.’

Mr Sunak sought to revitalise his campaign by portraying himself as the ‘change candidate’ at the hustings. And he again highlighted the fact he backed Britain leaving the EU while his rival supported Remain.

It said: ‘Having spent her early years living in Scotland, Liz is a child of the Union. She knows from personal experience that we are stronger when we work together across the United Kingdom.

‘We have achieved so much over the past 300 years working together and we can achieve so much more in the future. This is why Liz is so positive about Scotland’s future in the United Kingdom.’

A spokesman for Mr Sunak’s campaign said: ‘Polls continue to show that Rishi is the best candidate to beat Labour and stop the SNP from getting into power via the backdoor.’