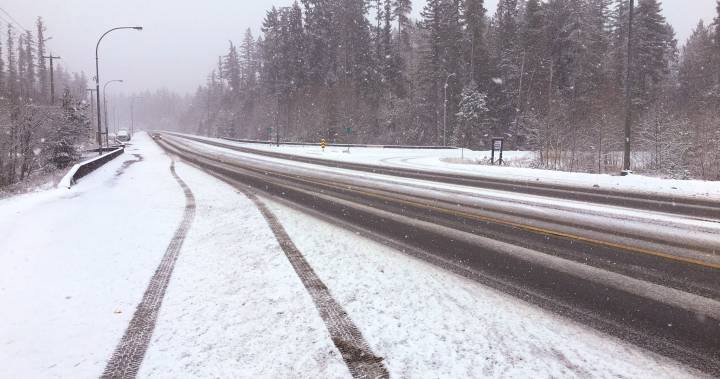 Parts of Vancouver Island are under a snowfall warning on Friday.

The snow is now coming down heavier in Victoria, and Environment Canada says up to 10 centimetres could blanket areas inland as well as east Vancouver Island.

Areas that are higher terrain like the Malahat are expected to see the highest accumulations of snow.

Environment Canada says that while snow will fall throughout the day Friday, a band of convective flurries is forecast to develop after 4 p.m. from Nanoose Bay to Fanny Bay. This band has the capability of producing heavy snow and poor visibility for a short period of time.

Travellers along this stretch of Vancouver Island and those travelling on Highway 4 towards Port Alberni are advised to be prepared for sudden reductions in visibility due to heavy snow as well as rapid accumulation this evening.

Environment Canada says the threat of heavy snow will end by midnight.

Metro Vancouver and the Fraser Valley will also see some snow Friday, but strong winds are going to be the bigger problem in these areas.

Environment Canada has issued a wind warning for the eastern parts of Metro Vancouver along with the Fraser Valley, Greater Victoria, Howe Sound and Whistler areas.

“For the Lower Mainland and Sunshine Coast, we could see anywhere from zero to five centimetres. That’s not a major snow event. We will see it through the day, on and off, depending on your location,” meteorologist Kristi Gordon said Thursday.

Winds are expected to reach about 83 km/h in Abbotsford by around 7 p.m. Friday.

There is chance of flurries later Friday and into Saturday morning.

This is when strong outflow winds across the Strait of Georgia, pick up moisture and dump snow along eastern and south parts of Vancouver Island.

This region will experience waves of snowfall from Friday morning through Saturday morning.

—With files from Simon Little