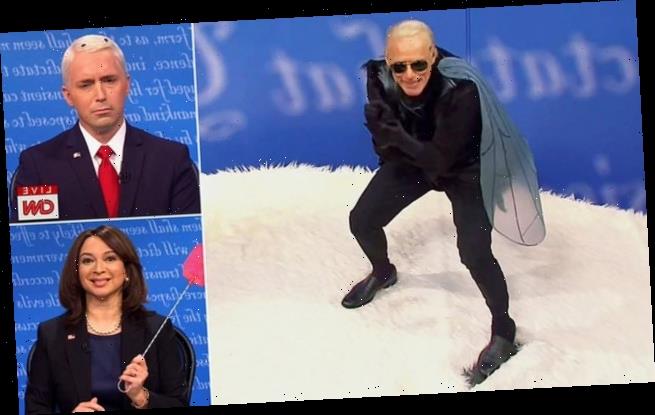 SNL’s cold open focused on the Vice Presidential debate between Sen. Kamala Harris and current VP Mike Pence, bringing back Jim Carey as Joe Biden who had been transformed into the now infamous fly that landed on Pence’s head.

During the new season’s cold open, Pence, played by Beck Bennett, curtsied as he was introduced by debate moderator Susan Page, played by Kate McKinnon.

As he took his seat, Harris, played by Maya Rudolph, danced onto the stage, spraying cans of Lysol in both hands.

The two candidates were separated by ‘buffet-style sneeze guards’ because ‘one of you works for patient zero,’ a dig at President Trump and many of his supporters being diagnosed with coronavirus following a ‘superspreader’ event at the White House’s Rose Garden. 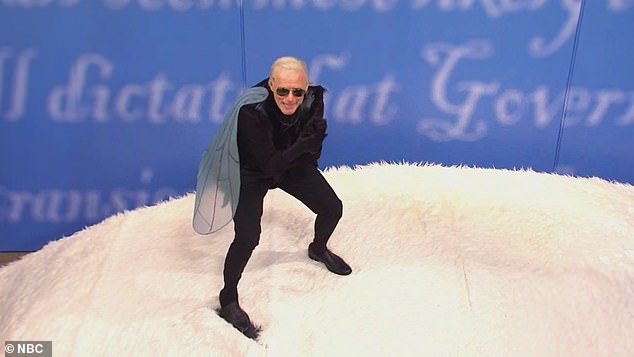 SNL’s cold open featured the return of Jim Carrey as Joe Biden, transformed into the fly that landed on VP Mike Pence’s head during the real-life Vice Presidential debates this week 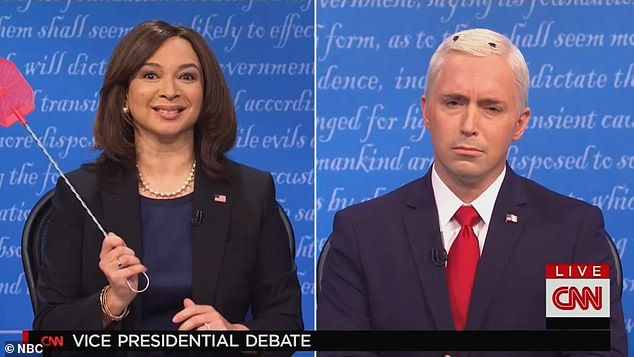 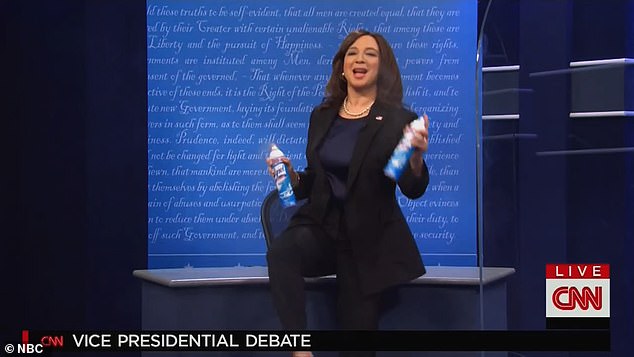 The debate poked fun at the way Pence interrupted Harris and the various faces Harris made as he responded.

While Bennett’s Pence rambled, Rudolph’s Harris said: ‘I’m going to smile at him like I’m at a TJ Maxx and a white lady asks me if I work here.’

After a few moments of Bennet droning on about how seriously Trump takes coronavirus, Rudolph switched to what she called ‘a Claire Huxtable side eye.’

The final face Rudolph pulls is to ‘fix my face so you have no idea what I’m thinking, but every black woman at home knows exactly what I’m thinking. And a few of the white woman. And all of the gays.’

The pair then embarked on a series of joke about fracking, swine flu, the state of Trump’s health and the Democrats’ reluctance to discuss packing the Supreme Court and the coronavirus vaccine.

When addressing fracking, Rudolph says, ‘If anyone should be talking about fracking, it’s my guy Joe Biden. Joe Biden fracks in his free time. Joe Biden will frack you so good, Pennsylvania.’ 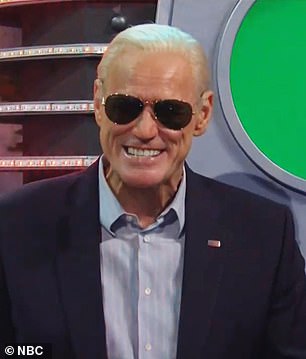 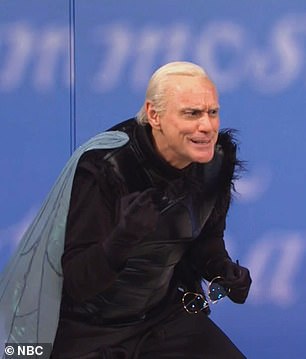 Jim Carey returned to play Joe Biden, who donned sunglasses (left) before teleporting and turning into the fly (right) that landed on Pence’s head during the actual debate 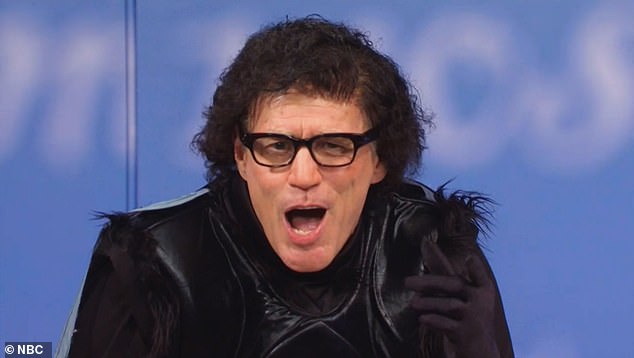 After landing on Pence’s head, Biden (Carrey) slowly morphed into Jeff Goldblum, who starred in the movie The Fly, complete with Goldblum-like hair and glasses 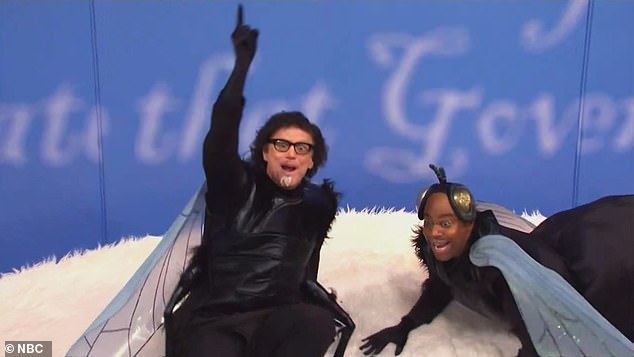 During the sketch, Carrey’s Biden (left) was joined by the resurrected fly of Herman Cain (Keenan Thompson), who died in July after catching coronavirus

As with the actual debate, the real star of the cold open was the fly that landed on Pence’s hair.

In SNL’s version, the fly was actually Joe Biden – once again played by Jim Carrey – who attempted to teleport to the debate to save it, but on the way there turned into a half-man, half-fly in a parody of the movie, The Fly, which starred Jeff Goldblum.

In the cold open, Carrey’s fly suit-wearing Biden lands on Pence’s head. The actor then slowly morphs his Biden impression into one of Goldblum, complete with a riff on his time as an Apartments.com commercial star.

After the real-life debate, social media users had joked that Goldblum should appear on SNL playing the fly that landed on Pence’s head.

The Biden fly was then joined by a second fly, Keenan Thompson playing a resurrected Herman Cain, who died at 74 in July after catching coronavirus. Cain was a Republican and Trump supporter who’d refused to wear a face mask during the pandemic.

The week’s host, comedian Bill Burr, took no prisoners during his monologue, addressing everything from coronavirus and cancel culture to being ‘woke,’ gay pride and actor Rick Moranis being assaulted in a New York City street.

Burr started off by saying that it made him feel ‘comfortable’ that everyone in the audience was wearing a mask and listening to the ‘eggheads.’

But then, he went on to say that he didn’t care if people opted not to wear masks – ‘take out your grandparents, take out your weak cousin with the asthma.’

‘I don’t care it’s your decision, there’s too many people,’ Burr said. ‘If you’re that dumb and you wanna kill your own family members then do it, it stops you from producing. It’s literally a dream come true.’

‘Did you see Rick Moranis got sucker punched on the Upper West Side? ‘New York is back baby!’ Burr said about the October 3 incident involving the 68-year-old actor.

Burr went on to say ‘We lost our edge there for a minute, the city started looking like a giant Bed Bath and Beyond and then – bam! Ol’ Ricky took one in the chops!

‘It had to happen. That’s what happens when you stick an M&Ms store in Times Square. The universe has to balance itself. Get the peep shows back in Times Square and old people can walk 40 blocks away.’

Burr then talked about cancel culture, which he called ‘stupid,’ and the fact that people had ‘run out’ of people to cancel that they were trying to cancel dead people, like actor John Wayne. 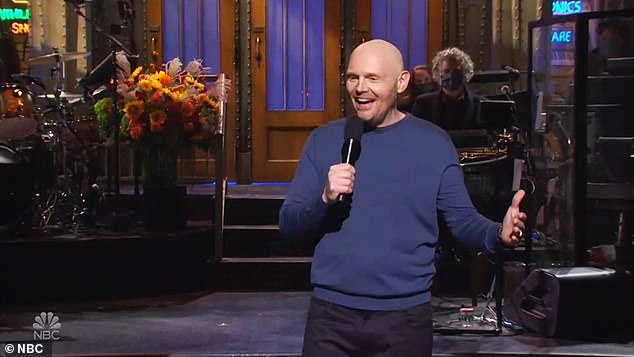 ‘God did that 40 years ago!’ Burr said. ‘It’s like, yeah, he was born in 1907. That’s what these people sounded like. You never talked to your grandparents and brought up the wrong subject and it suddenly went off the rails? You don’t talk about race and religion with your grandparents. You keep it simple!’

He wrapped up his monologue by talking about how white women had coopted the ‘woke movement’ and his thoughts on Gay Pride Month.

‘The way white women somehow hijacked the woke movement, generals around the world should be analyzing this,’ he said.

‘The woke movement was supposed to about about people of color, not getting opportunities, the at bats they deserved, finally making that happen. And it was about that – for about eight seconds.’

And then somehow white women swung their Gucci-booted feet over the fence of oppression and struck themselves at the front of the line,’ Burr said. ‘I don’t know how they did it! I’ve never heard so much complaining in my life from white women!’

He went on to joke that white women had stood by ‘toxic white males’ and ‘rolled around in the blood money’ for years and now they needed to ‘shut up, sit down next to me and take your talking to!’

Burr then recounted the moment when he learned what Gay Pride Month was – claiming he’d never heard of it before in his 52 years – while visiting New York City a couple years ago.

‘That’s a little long, dontcha think? For a group of people who were never enslaved?’ Burr joked as the audience chuckled nervously.

‘How did they get all of June? Dude, black people were actually enslaved. They get February. They get 28 days of overcast weather, the sun goes down at four in the afternoon, everybody’s shivering, nobody wants to go on the parade.

‘How about you hook ’em up with July?’ Burr asked, pointing out that ‘these are equator people! Give them the sun for 31 days! There’s gay black people, they could celebrate from June 1 to July 31 – 61 days of celebrating!’

Jack White performed as the musical guest after intended performer Morgan Wallen was seen failing to adhere to coronavirus precautions in a video recorded prior to rehearsals beginning. In the video, he took shots at a crowded party and kissed an unmasked woman.

CategoryWorld News
Tags‘SNL’ at fly fun Mi on pokes the