Home » World News » Slash recalls dangerous 'November Rain' video shoot and finally getting sober: 'I didn't have very much fear of death in those days'

Slash recalls dangerous 'November Rain' video shoot and finally getting sober: 'I didn't have very much fear of death in those days'

Guns N' Roses guitar legend Slash is finally touring again — in support of his new, COVID-delayed 4 album with his side band, Slash featuring Myles Kennedy and the Conspirators — and the famous road warrior is thrilled to be back onstage after such a long pandemic hiatus. He’s also excited to be playing relatively intimate venues — the sort that GNR, whom Slash rejoined in 2016, haven’t played since the mid-‘80s.

Speaking to Yahoo Entertainment from a Phoenix hotel room before a Conspirators soundcheck, he muses, “[Guns N' Roses] is this really big, epic kind of different of a thing, and it's great and I love it, but I'm keeping the Conspirators together because I love that down-to-earth, sort of toe-to-toe-with-the-audience kind of vibe.”

GNR of course started off as a gritty street band, but by the time the ‘90s rolled around and they released their double-album Use Your Illusion, everything in their world was — to use Slash’s adjective — epic, especially their music videos. And the most epic and excessive of all was “November Rain,” which turns 30 years old this month.

One of the most expensive music videos of all time, with a more than $1 million budget (factoring for inflation, that’s the equivalent of roughly $2.1 million today), “November Rain” is still massive: Recently, it became the first music video made before the YouTube era, and first music video of the entire 1990s, to hit 1 billion views on YouTube. Avril Lavigne even parodied Slash’s iconic church-guitar-solo scene in her own “Rock N Roll” video.

Slash admits that the video, which was part of an ambitious, over-the-top trilogy with “Don’t Cry” and “Estranged,” was all the “brainchild” of GNR frontman Axl Rose. “I don't even know exactly what it's about, but I was always that guy who really could not care less about concept videos and all that kind of stuff,” he chuckles. “Really, Axl would be the best to walk you through it, because I was never present for all of that. I just showed up to do it. … I really just couldn't get into the cinematic and theatric kind of concept thing. So, I just would write my own part, like: ‘This is what I'll do, and you guys do whatever.’”

The “November Rain” video, inspired by Del James’s short story “Without You,” depicted a grand but doomed wedding between Rose and his real-life girlfriend at the time, Stephanie Seymour; about midway through the seven-minute mini-movie, Slash strutted out of the cathedral to play his solo in the middle of the desert. That external scene was in fact director Andy Morahan’s idea, and Slash says when he showed up to the Cerro Pelon Movie Ranch alongside Highway 41 in New Mexico (“Where Silverado was shot,” he notes) to film with Morahan, he had no idea just how “cinematic and theatric” — and potentially dangerous — the scene would be. 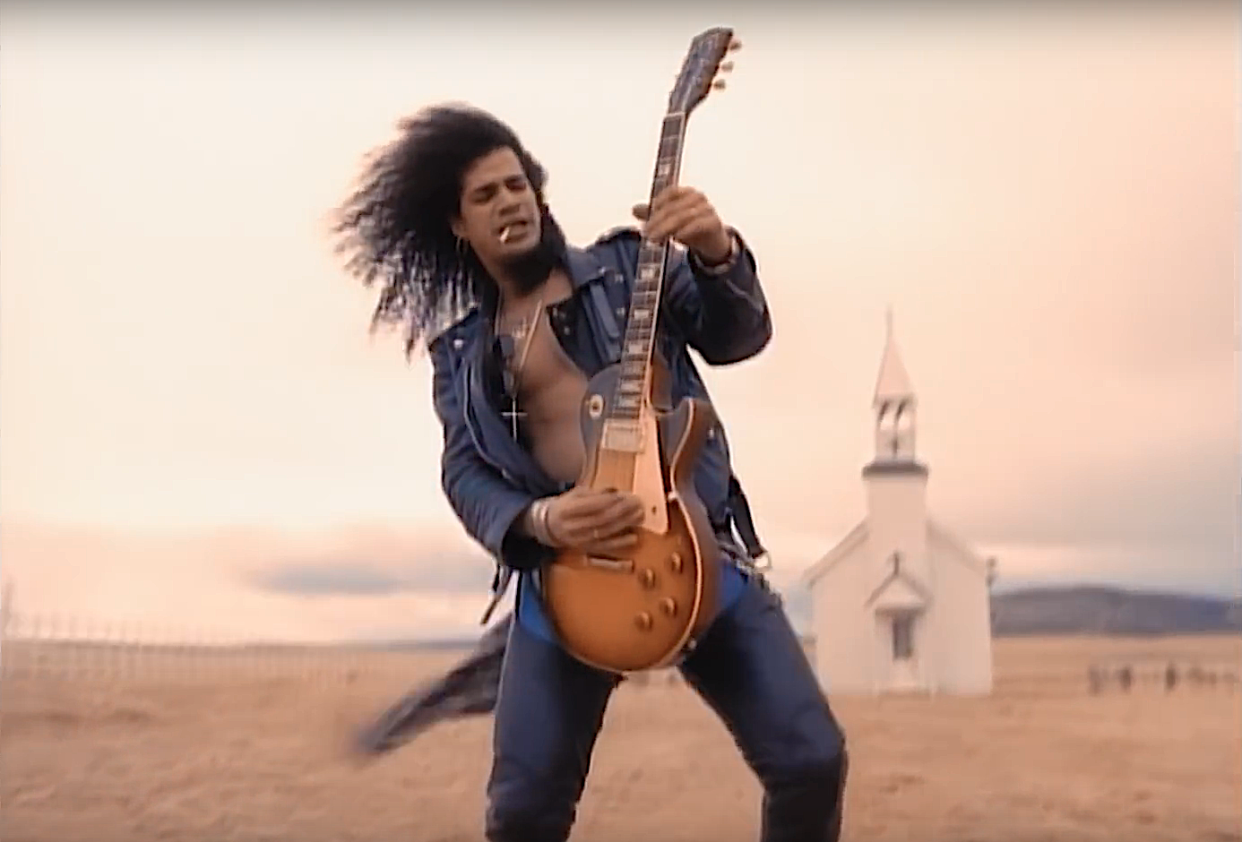 “[Morahan] didn't tell me that they were going to be doing bomb shots with me with a helicopter! And when I got out onto the set and did my thing, I noticed that this helicopter would come back and forth at extremely fast speeds and get really, really low,” Slash recalls. “And I thought, ‘Well, this'll be my last day on Earth.’ … It was the kind of thing where you’re just resigned to the fact that you're probably gonna die. And at that point in time, I was pretty much had that [mentality] — I didn't have very much fear of death in those days. Anyway, we shot it and I had no idea what it was going to look like afterwards. But it ended up looking pretty cool. But I didn't know it was going to be as memorable as it turned out to be.”

Slash admits that since GNR were already “playing stadiums and doing all that kind of stuff” by 1992, the “November Rain” shoot “didn't faze me all that much. … I think at the end of the day, the whole sort of trilogy, there was a feeling of like, ‘Wow, we've actually gotten to this point where we're shooting on a top of a building downtown with a helicopter,’ for ‘Don't Cry.’ And I remember taking a Mustang off a cliff! I think it was just sort of like an acceptance of the indulgence at that point.”

The early ‘90s was definitely a time of indulgence — and death-defiance — for Slash. By 2001, at age 35, he was diagnosed with a form of congestive heart failure called cardiomyopathy due to his years of alcohol and drug abuse, and he was given between six days and six weeks to live. Luckily, he beat the odds and survived, becoming completely sober in 2006, and the now 56-year-old guitarist credits his workaholism — which includes his busy schedule with both GNR and the Conspirators — for helping him stay clean. “Nursing a real chemical dependence is a big responsibility and you have to deal with it every day, so it takes a good chunk of time, you know? So, when I got clean, I took all that extra time that I was wasting on my ‘extracurricular activities,’ and it just naturally went back into music,” he explains. “So, now I'm workaholic on 10. But it's good; it keeps me sane.

“Listen, man, if I hadn't quit doing what I was doing, I never would've made it through the pandemic. I'd be dead,” Slash continues, reflecting on working on 4 over the past two years. “Because I could not have handled that kind of shift in pace, where all of a sudden you're staring at an abyss of how long you're gonna be grounded. … I don't think I would've been able to do half the stuff I've done in the last 15 years had I not gotten my s*** together. I just wouldn't have been able to keep up the pace. The pandemic would've been a disaster for me, because not being able to tour and having that thing to focus on and grab onto would've been a disaster. But now I've sort of learned how to be patient and calm. I did a lot of writing and recording, and I figured out ways of getting through it.” (Along with Conspirators’ material, Slash “worked on a bunch of other stuff,” including new “Guns N' Roses stuff” that he teases is “coming — that I can say.”)

Many recovering addicts understandably relapsed during the COVID-19 pandemic, but Slash says he was never tempted to drink or do drugs during that challenging time. “The thing is, is I did it to the hilt for so long,” he explains. “Every time even the idea of going in that direction popped up in my mind, it brought back such ugly memories that I've never felt really compelled to go through with it … I don't have any regrets about that period; I'm not what you call a ‘sobriety flag-waver,’ because I'm sober out of necessity more than anything. I loved a lot of the s*** I used to do. But it got to a point where it wasn't fun anymore, and you couldn't recapture that high from the first time that you did it. And it was just all an illusion. And it took me a long time, but finally I was able to put it in perspective and… finally change it.

“So, all things considered, even during the pandemic, the idea of a Guinness probably sounds good, but I know where that goes. And so, it's just end of conversation.”

Check out Slash’s full, extended Yahoo Entertainment interview, in which he discusses working with Myles Kennedy and the Conspirators, how he acquired his famous top hat, why he never thought Guns N' Roses would become a big band, how GNR’s sudden ‘80s fame messed with his head, and the state of rock music today… plus, he meets Yahoo Entertainment music editor Lyndsey Parker’s pet snake, Nagel: