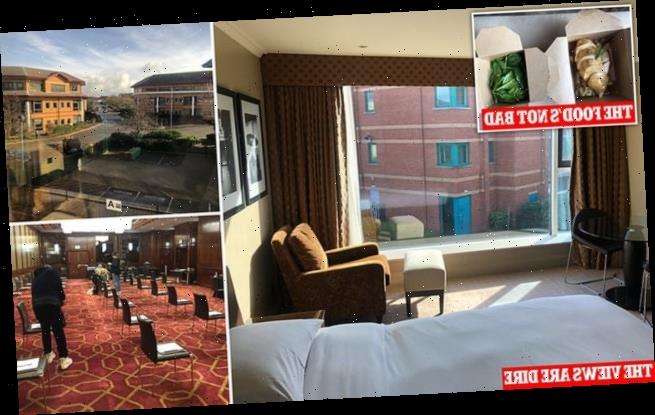 Welcome to faulty towers, the border scheme that’s a security farce: SIAN BOYLE joins the first plane passengers in isolation as she faces ten days alone in a hotel room

Welcome to my world: a bedroom that’s roughly the size of a double garage – with a bed, a desk, a TV and a couple of chairs – and fetchingly decorated in shades of brown and orange.

The hotel entrance is locked at all times, I can’t leave my room unless it’s an emergency, and I’m forbidden from even opening the window.

No wonder someone has thought to provide a contact for The Samaritans among the useful phone numbers in The Welcome pack.

Quite frankly, I think there’s a good chance that I will go mad because this is to be my home for ten long days and nights.

As of yesterday, people arriving from one of 33 ‘red list’ countries deemed at high Covid risk must quarantine. And I am one of them after flying in from Portugal (via Paris because there are no direct flights between the UK and Portugal). 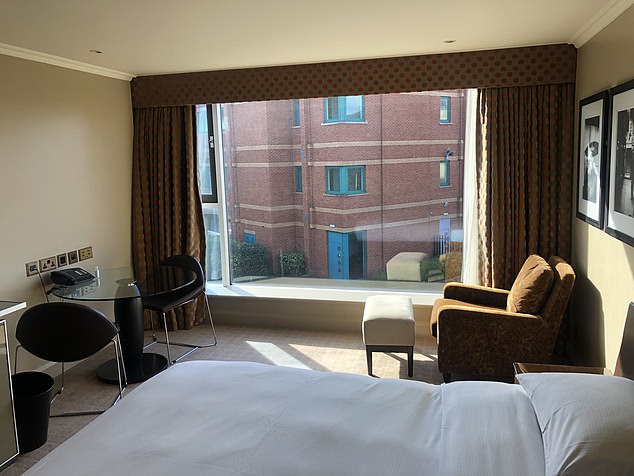 The bedroom that’s roughly the size of a double garage comes with a bed, a desk, a TV and a couple of chairs

The word chaos doesn’t even begin to describe the new system.

My journey into farce began last Thursday – my flight to Lisbon was on Friday morning – when I tried to book a hotel room for quarantine on my return.

The website crashed continuously before I was eventually allocated the Heathrow Holiday Inn.

But then on Saturday, I received another email telling me that my booking had been unsuccessful and urging me to try again.

This admin ‘error’ had effectively criminalised me and left me potentially stranded in a foreign country because it is illegal to travel to a red list country without having booked the quarantine hotel first.

Entry to the UK is now denied to anyone who has not filled out a Passenger Locator Form first and the PLF form can only be completed with the booking reference of the quarantine hotel.

Fill it in incorrectly and the PLF could land you in jail for a decade – at least if Health Secretary Matt Hancock has anything to do with it!. I managed to get another room, this time the Radisson Blu at Heathrow.

It was on the plane that the utter incompetence of the new scheme presents itself. I was a red list passenger yet travelling on the same flight – in close contact with – with passengers from countries that are not on the list.

And when we land, Border Force officials usher everyone – regardless of where they began their journey – towards passport control. 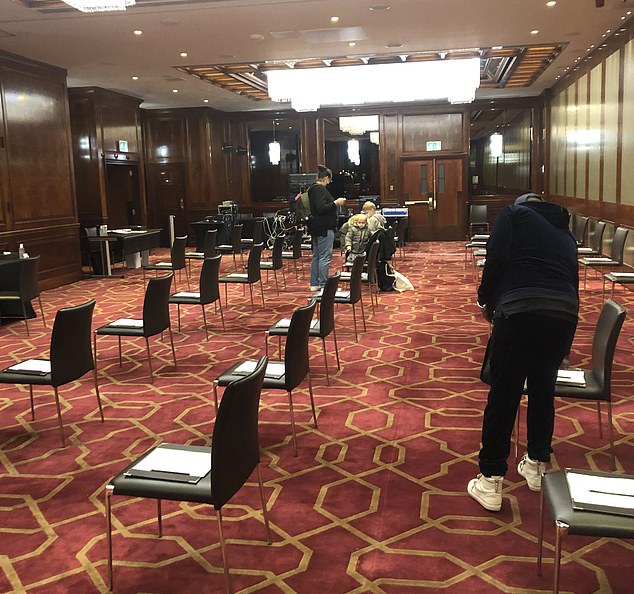 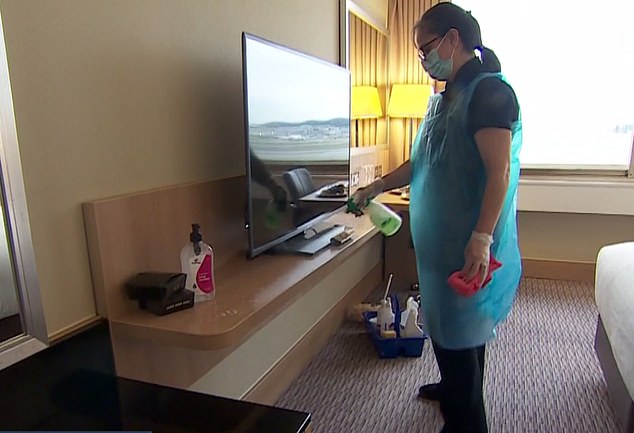 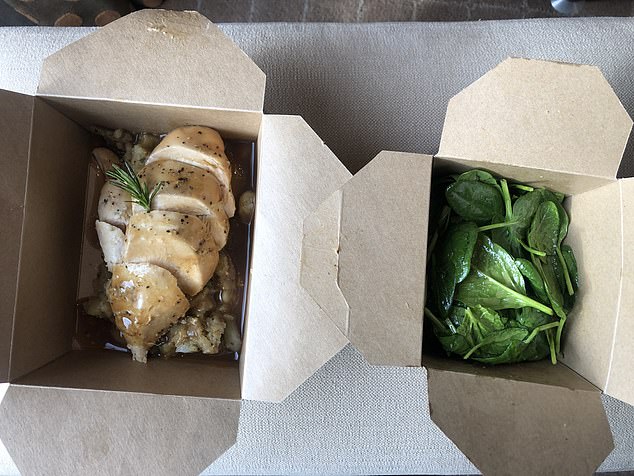 Their brainwave solution to containing a highly contagious disease and preventing it from mutating further in the UK seems to be queue dividers.

That’s right – retractable barriers placing the red list passengers in one queue and everyone else right next to them in another queue, less than a foot away.

What a telling contrast to Australia where flights are boarded by biosecurity staff and Border Force officials on arrival who brief passengers about quarantine requirements and biosecurity before they are screened for Covid and then escorted by police or the military to their quarantine hotels.

In the red list queue it quickly becomes apparent that I am one of the only people who has got the correct documentation and booked a hotel for my quarantine.

An NHS worker who attended her father’s funeral in Portugal on Thursday was due to fly home Sunday before the quarantine deadline.

But her phone died during the France transit and she was unable to show officials her documentation which was stored on the website. She’s distraught.

Another woman assures that she won’t be quarantining because: ‘I live alone. The rules say you only need to book a hotel if you live with other people.’ I think she’s in for a shock.

I finally found one man, who’d arrived from the Congo, who told me he had actually booked a hotel. ‘But I don’t have the money for ten days,’ he said. ‘I just booked three days in my own hotel and I’ll leave after that.’ 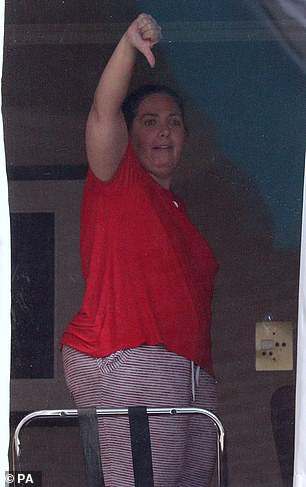 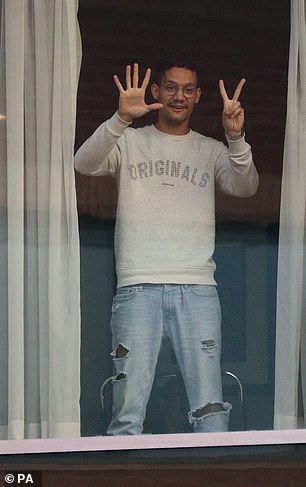 When I reach the desk at Border Control I realise that everyone in the red queue is going to be shipped to a hotel for quarantine – and hit with the £1,750 bill – regardless of their explanations,.

‘No one gets away with it,’ a Border Force guard tells me gleefully. ‘They all have to pay for the hotel and they have to pay the Fixed Penalty Notice on top of that’.

In contrast to the bewildered passengers, the Border Force seem to rather enjoying their first day over-seeing the restrictions.

‘You’ll all be issued with a fine if you don’t have the correct documents,’ one admonishes the queue. ‘All you had to do was fill out a form, half an hour, that’s all. No excuses.’

I count at least six Border Force guards who aren’t wearing masks. Others have them dangling from an ear, or drooped under their chins.

When finally we make it to the baggage hall, the half dozen or so of from red list countries were handed over to a new group of heavies, G4S, and penned off to the side.

But I didn’t have my suitcase and was allocated a ‘chaperone’ to guard and assist me. She doesn’t speak English, doesn’t have a clue what is going on and seems happy to follow my lead as I work my way around the hall to find my luggage.

Then four swaggering G4S staff escort us through Terminal 2 like prisoners of war, one high-vis jacket at the front conversing with his colleague a few feet away at the back – via radio: ‘Yeah. We got them,’ he boasted.

And all the time people pass close by, gawping at us and doubtless wondering what we’ve done to merit such a heavy security detail. 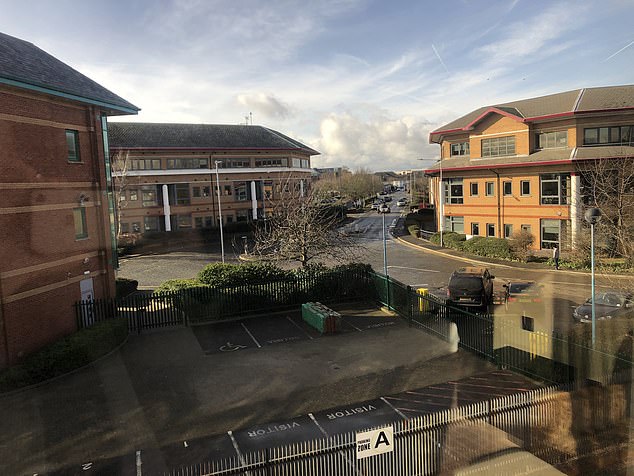 Eventually, a coach drops us off at Radisson Blu Edwardian Heathrow Hotel & Conference Centre, where 52 of the 500 rooms have been booked out for quarantine.

I feel nervous as I walk down the long corridor to my room, knowing I won’t be leaving it for more than 240 hours – and possibly longer if I test positive for coronavirus on days two or eight of my quarantine when screening is carried out.

There’s no bedside light, just harsh ceiling lights and the window can only be opened – just a crack with a special key held by a hotel staff member.

There’s no drinking water in the room and I’m too wary of the plumbing here to trust the tap.

When I call down to reception to ask about water, a wire comes loose from the telephone socket I plug it back in and try again.

I’m told we will have 1.5litres of water delivered to us per day, the bins will be collected daily, and seven items of laundry per person per week are offered free of charge.

Within an hour of my arrival I can hear one of my neighbours screaming on the phone to a relative about being trapped here.

There are positives. The food on offer is healthy and tasty. I have roast chicken and spinach salad for lunch, and salmon fillet and kale salad for dinner.

Meals are delivered in boxes with wooden cutlery to the door at set periods three times a day.

And the Radisson Blu staff are sympathetic to our plight. To make myself a little more at home I’ve brought a yoga mat, a Nutri Bullet blender to make my own juices, a nice mug, decent coffee, a dressing gown and candles for ambience.

The hotel staff can accept deliveries (including Deliveroo and Just Eat), so I plan to order a bedside lamp, a pot plant and metal cutlery from Amazon.

The bar menu is also fully stocked: A bottle of Moet & Chandon for £68, Lagavulin 16-year single malt for £12 and even a bottle of Châteauneuf-du-Pap for £70.

It may well be needed to get through the next ten days.