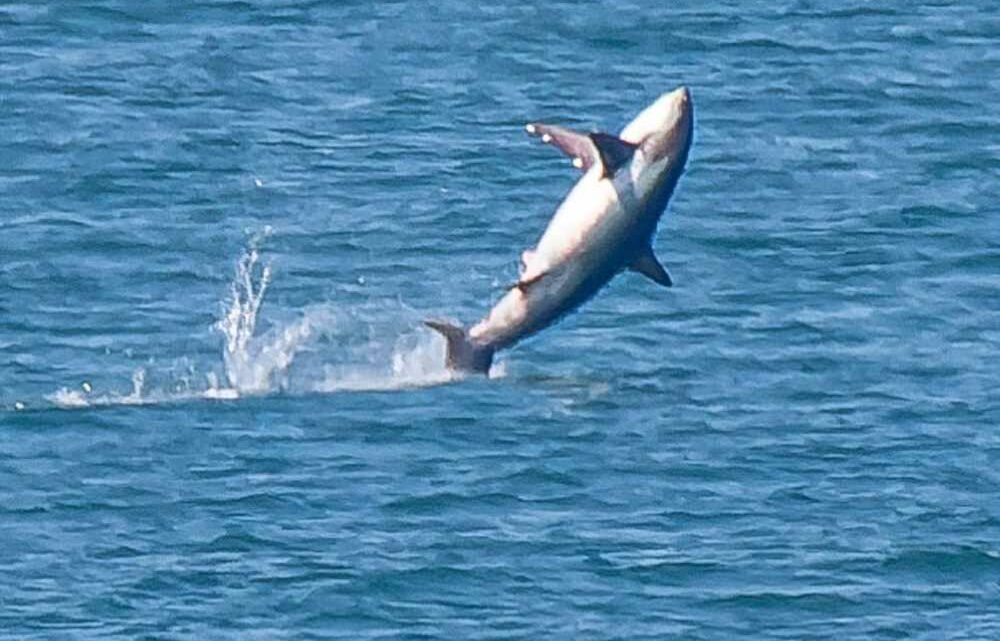 THIS is the shocking moment a SHARK leaps out of the sea in front of a stunned photographer off the Welsh coast.

The long-tailed thresher shark, which can be up to 25ft long, was snapped making the spectacular leap near Strumble Head, Pembrokeshire. 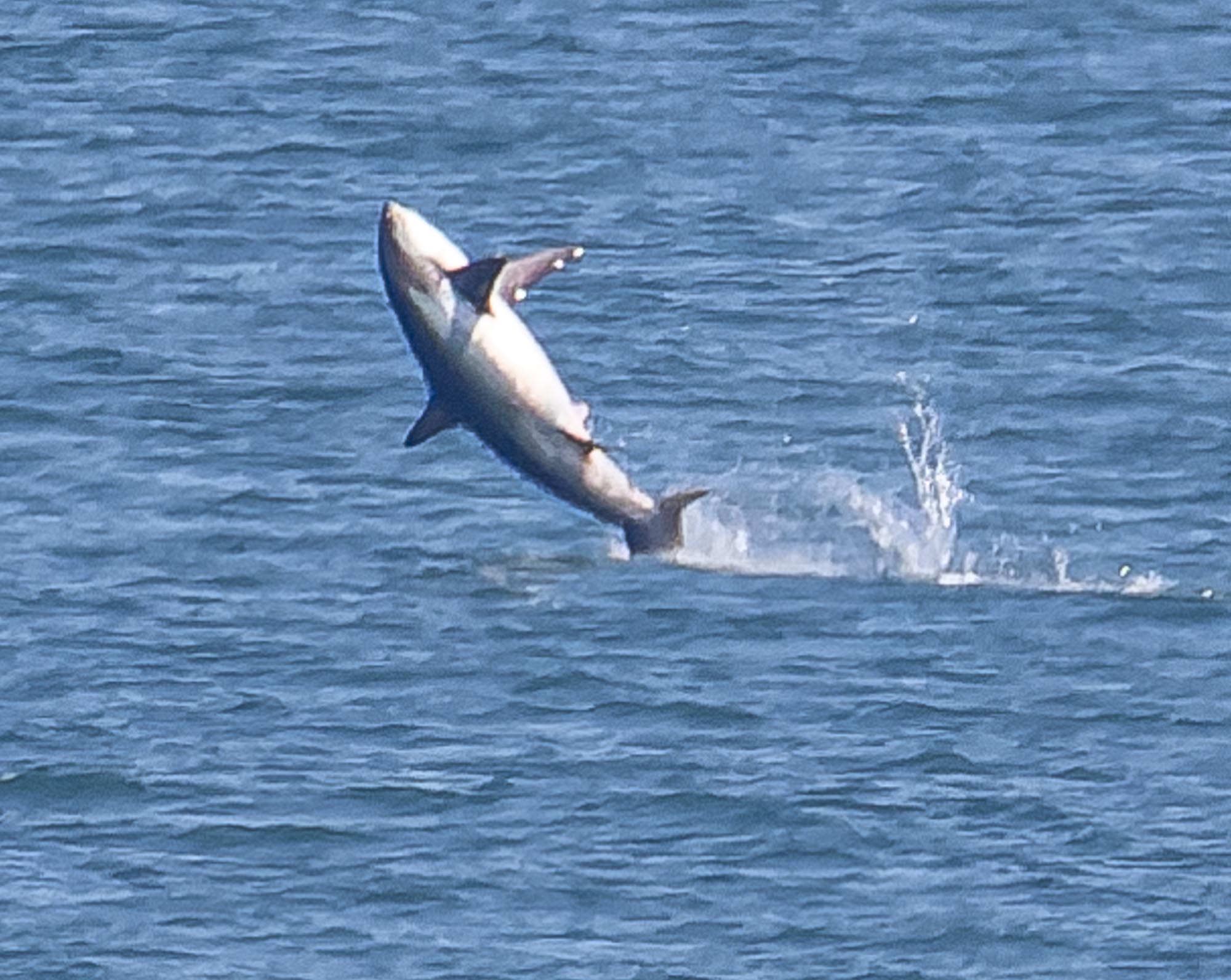 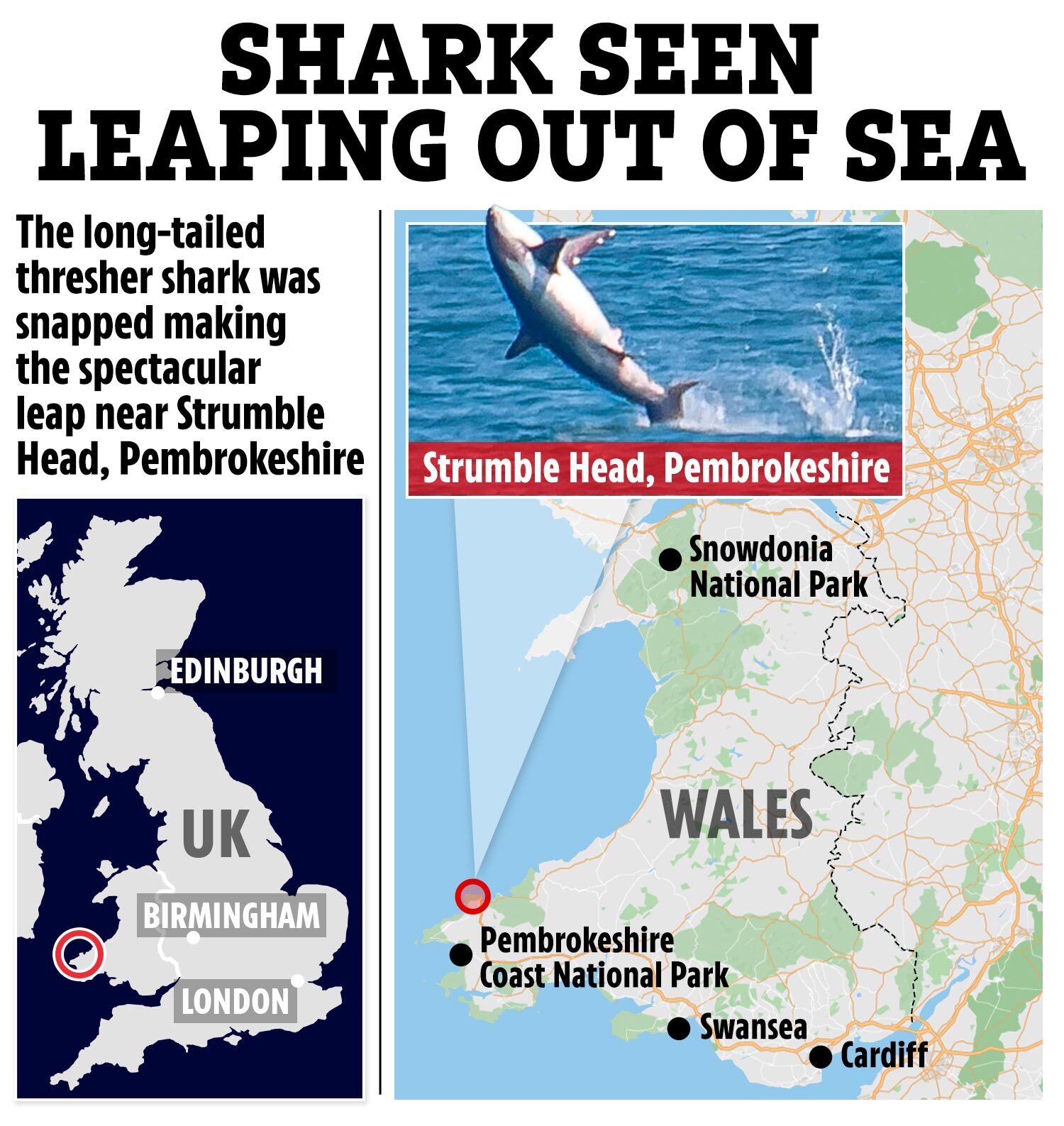 Snapper Ken Barnett of the Sea Trust was lucky to capture the amazing show.

He said: "Such a great sight to see this thresher shark leave the water at Strumble Head."

The mighty animal was seen leaping out of the water, as its tail grazed the surface before splashing back under.

This is a rare sighting of a thresher shark in UK waters – as they generally stay far offshore over deeper water.

Thresher sharks have been listed as vulnerable to extinction by the World Conservation Union since 2007.

Despite its size, the common thresher is minimally dangerous to humans due to its relatively small teeth and timid disposition.

This comes just days after a fisherman grappled with a "monster shark" that sparked terror at a beach – saying he's "never seen anything like it in 13 years".

Darron Tapper, 54, said the shark pulled his fishing rod out of his hands and almost dragged him in with it when it went for his lure.

He saw a large shadow under the surface but was unable to properly identify the creature although he believes it may have been a shark due to the sheer power of its bite.

By that time they had received two other reports from bathers of what was suspected to be a shark in the water off the busy beach.

What is a thresher shark?

Thresher sharks have long tails that make them impressive hunters and fast swimmers.

All three thresher shark species have been listed as vulnerable to extinction by the World Conservation Union since 2007.

They are usually hunted for their meat, livers, skin (for leather), and fins for use in shark-fin soup.

The common thresher is distributed worldwide in tropical and temperate waters, though it prefers cooler temperatures.

Despite its size, the common thresher is minimally dangerous to humans due to its relatively small teeth and timid disposition.

Thresher sharks are in fact said to be scared of humans and will even swim away the moment they see a diver.

The sightings prompted an RNLI lifeguard to use a megaphone to tell everybody to get out of the water in scenes reminiscent of the classic movie Jaws.

They also put up red flags on the beach – the RNLI's signal to warn swimmers of a serious hazard in the water.

Two lifeguards on jet-skis patrolled the water to search for the 'large marine life' but found nothing untoward.

And then later on in the same day, a dad claimed his son is “lucky to be alive” after a "shark" in Bournemouth “brushed past his leg” in a terrifying sea encounter.

Alan Hayward, 48, was watching his kids, Henry, 11, and Mollie, 8, playing in the sea when they started running towards him, jokingly shouting “run for your life."

Son Henry claimed to have felt something big brush against him while they were playing in the water – and Alan has since realised his family snap shows a 'fin' lurking in the sea.

The family from Oakton, Kent, had travelled to Boscombe for a day-trip as part of their week away.

Alan told The Sun: “We decided to take the kids down to the beach for the day, and it wasn’t until later on that we saw online the beach was closed and then we looked through our photos and saw that, and saw the fin going through the water.

“He was in the water and he came running out with his sister, and she was shouting “let’s run for our lives” but just as a joke, and he said something had brushed past him.

“We laughed at him just thinking it was a bit of seaweed and it wasn’t until we got home that we were looking through our photos and we saw that shark, or what looks like a shark in the background.

“I just thought what’s that, and then when we zoomed in we could see the dorsal fin.

“She said jokingly to him “lets run for our lives” and it was just super lucky.

“At least we can laugh about it now, it’s terrifying and I mean he’s braver than me, I don’t know what I would have done.”

'Jeopardy!'s Mike Richards May Be in the Running for Host but Don't Count Out These 2 Reported 'Standout' Candidates
World News