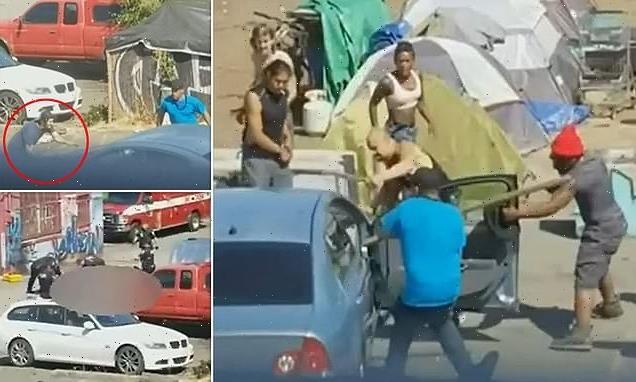 Couple with two-week-old in their car are attacked by mob armed with a machete, sticks and rocks at a Seattle homeless camp before they ‘run over and kill one of the assailants while trying to escape’

A Seattle couple – with a two-week-old baby in their car – was attacked by a mob of homeless people before running over and killing one of the men as they tried to escape, according to published reports and a recently released shocking video.

The wild July 27 altercation shows the couple arrive at one of the homeless encampments that dot the city to retrieve items that were stolen from them, according to KIRO-7 News, which aired the video Aug. 13.

The couple got out of the four-door sedan and the female passenger proceeded to get into a bare-knuckles brawl with another woman – but not before first opening the back door to apparently check on the baby sitting there, the video showed.

The male driver of the car was slammed in the back with a large piece of wood wielded by a homeless man as the women slugged it out.

After their fight petered out, both the driver and passenger returned to the four-door sedan but their path was blocked by the group of homeless men. One with a machete cracked the back window, where the woman and baby were sitting, and others pelted the car with sticks and rocks. 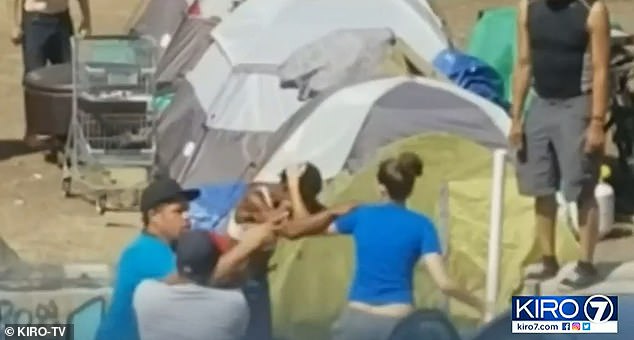 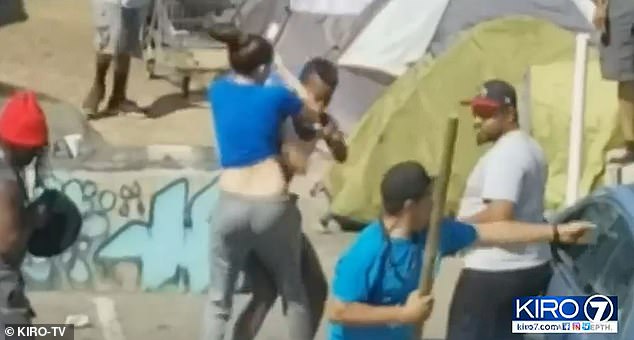 The driver is seen peeling out with his door still open, circling around and smashing into a graffiti-covered shed. He then backs up and speeds forward before mowing down a man later identified as Zachery J Reou.

The victims body was dragged about 30 feet before the unidentified couple stopped and called 911, Seattle police said in a release after the incident.

The pair cooperated with authorities and prosecutors said they don’t expect them to be charged with a crime.

They went to the encampment because reportedly their shoes and Bluetooth speaker were stolen. The violence unfolded after they took the items back to their car, KIRO-7 News reported.

‘It’s incredibly frustrating to feel like your things are right there and want to say, “That’s mine. Give it back,'” Casey McNerthney, a spokesperson for the King County Prosecuting Attorney’s Office, told the Seattle Times. ‘But it rarely works out well.’

Miller is a 12-time felon in Washington and California, and Rosser is a nine-time felon, KIRO-7 reported. Rosser was the one swinging the machete, the Seattle Times reported.

As the couple drives away, the homeless mob continues its assault on the car 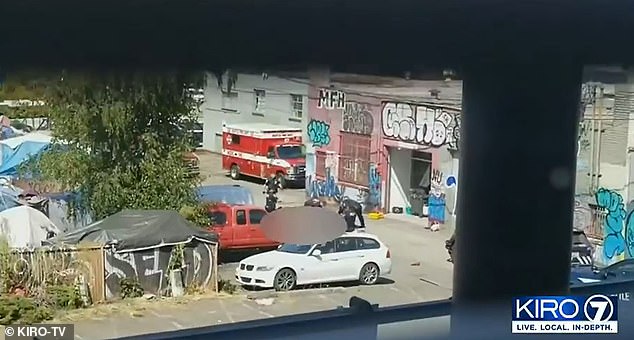