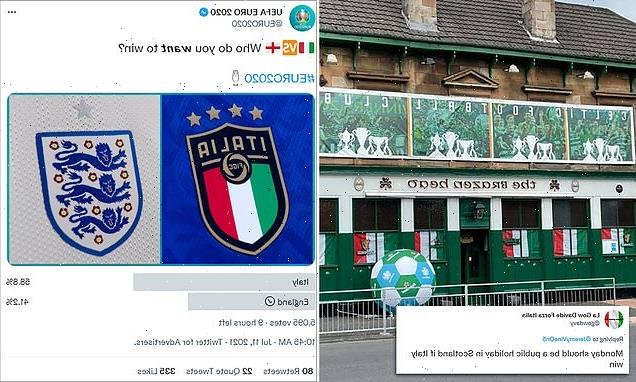 Sales of Italian flags and shirts are soaring in Scotland ahead of the Euro 2020 final tonight – amid tongue-in-cheek calls for a bank holiday if England lose the match and complaints of coverage of the tournament through an ‘English lens’.

While chants of ‘It’s Coming Home’ have returned in full fervour to the streets in hopes of a long-awaited big win, there is somewhat less excitement north of the border.

Millions of England fans will be wearing red and white shirts in living rooms and pubs across the country, with 60,000 supporters set to cheer on Gareth Southgate’s men at Wembley Stadium.

The Queen, Prince William and Boris Johnson have all praised the Three Lions ahead of the side’s first major final since the 1966 World Cup final tonight.

But The Scotsman reports that sales for Italian shirts and flags have soared in Scotland ahead of tonight’s finale, claiming it is related somewhat to Scotland’s ‘deep and rich history with Italy’, and not simply ‘clear Scottish distaste of It’s Coming Home’. 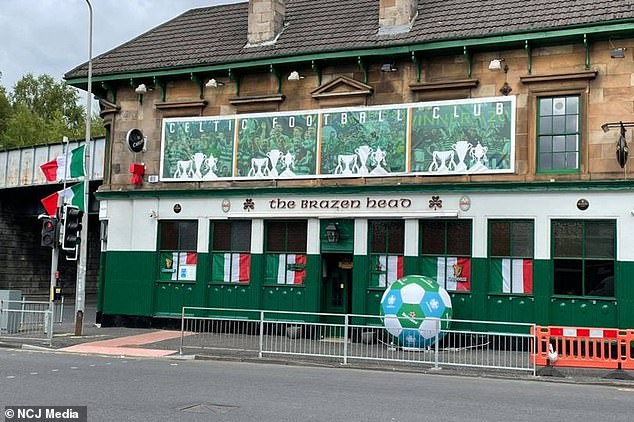 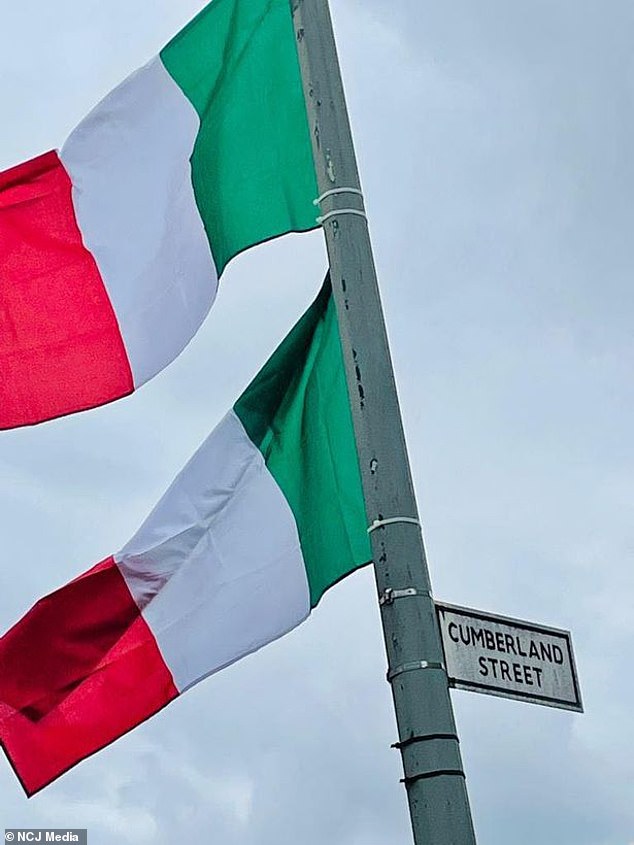 The Brazen Head, on the city’s Catchcart Road, has left passersby in no doubt of where their allegiances lie with huge Italian standards across the pub and even on a lamppost 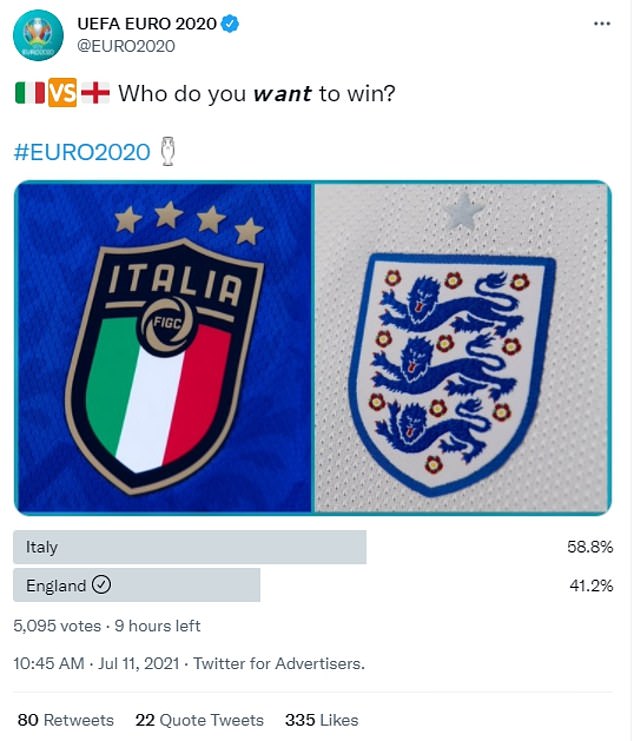 A poll from the UEFA EURO 2020 Twitter page asked social media users who they want to win the game. Just 41.2 per cent voted for England, with the remaining 58.8 per cent voting for Italy

It adds that the popular Glasgow Italian restaurant Eusebi Deli, established in 1954, is fully booked, offering pasta in the colours of the flag of Italy – within an atmosphere of tricolore bunting.

One pub in Glasgow, The Brazen Head, was pictured with Italian flags waving outside ahead of the game.

The National reported that the BBC is being urged to stop covering football tournaments through an ‘entirely English lens’.

SNP MP Gavin Newlands said other parts of the UK have to endure coverage which is of ‘no relevance or interest to them’.

For their July 10 front page, The National had run a story titled: ‘Save us Roberto, you’re our Final Hope (We can’t take another 55 years of them banging on about this).’

It featured a picture of Roberto Mancini, the Italian team manager, donning blue face paint similar to that worn by Scottish hero William Wallace, as portrayed by Mel Gibson in the film Braveheart. 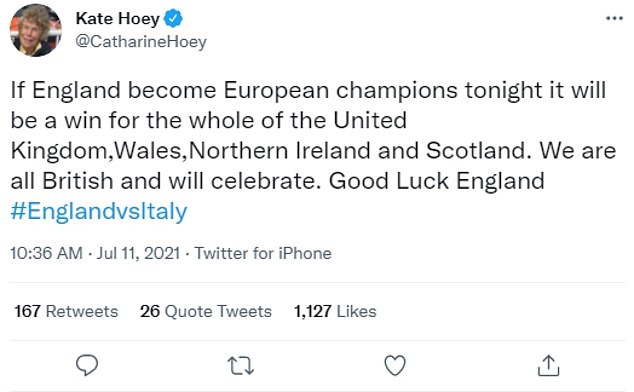 Kate Hoey, Baroness of Lylehill and Rathlin, this morning tweeted: ‘If England become European champions tonight it will be a win for the whole of the United Kingdom,Wales,Northern Ireland and Scotland. We are all British and will celebrate’

A poll from the UEFA EURO 2020 Twitter page asked social media users who they want to win the game.

Kate Hoey, Baroness of Lylehill and Rathlin, this morning tweeted: ‘If England become European champions tonight it will be a win for the whole of the United Kingdom,Wales,Northern Ireland and Scotland. We are all British and will celebrate.’

One social media user replied: ‘I had a conversation with my friend who is Scottish and she is supporting Italy because ‘they played well through the tournament’ I said she should support her neighbours after all we all live on the same island, to which she said ”no one in Scotland is supporting England.” ‘

But another replied: ‘I’m Scottish and supporting England. I know several others who are too.’

Writing in the Edinburgh Evening News earlier this week, MSP Angus Robertson, also part of the Scottish National Party, said he would be ‘delighted’ if England beat Italy.

He added that the ‘inspirational leadership by the most likeable and inspiring England manager I can remember’, along with a ‘lack of hubris and entitlement by Gareth Southgate’s players’ mean that ‘supporting England will be a great deal easier than past competitions’. 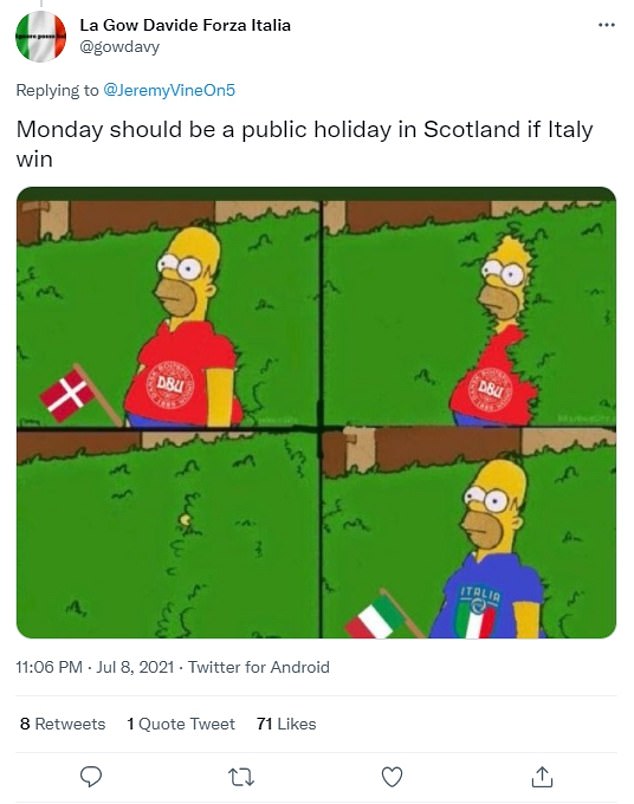 In it, one commentator says that the English media would be ‘so unbearable to listen to between now and Sunday night’, adding: ‘Even Sue Barker, Andrew Castle and Tim Henman won’t be able to shut up about it during the Wimbledon coverage and that is a different ball game altogether.’

But one contributor was pleased for the victory over Denmark, adding that England were ‘the better side… soft penalty aside’.

He added: ‘Gareth Southgate is a top bloke and has done brilliantly in getting England to a Final. Although I fear Italy will prove too strong, here’s hoping England prove me wrong.’

But another Scot was not quite so happy about his fellow Britons going through to the final, writing: ‘Funny how England went through on a own goal and as for their players diving, Sterling, Harry Kane and Jack Grealish are experts.

‘The fact a commentator said he doesn’t care that he dived as long as they are through goes to show that it wasn’t a penalty. C’mon Italy.’

The Glasgow Times ran a piece informing readers of the Italian football team’s anthems, including ‘Il Canto degli Italiani’, which translates to ‘The Song of the Italians’.

One commentator said the country’s team had ‘done themselves proud, especially when they thrashed England 0-0 down at Wembley, and the tail between their legs held high’.

He added he would be ‘waving the St George’s cross and singing ”tree lines on the shirt” with pride. But I will be drinking chianti and eating spaghetti bolognese for my tea.’