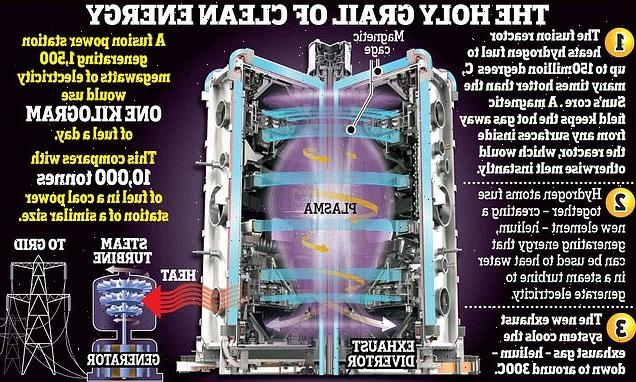 It has long been an elusive dream for scientists seeking to solve the world’s energy problems.

But while nuclear fusion offers an environmentally friendly way of producing power, attempts to harness it have so far stumbled.

This is because causing hydrogen isotope atoms to collide and fuse together to produce helium – the same way as the Sun creates energy – produces an enormous amount of waste heat.

But now UK scientists have found a way of dealing with these exhaust gases, cooling them from an extraordinary 150million Celsius to just a few hundred degrees, temperatures similar to that of a car engine.

This drastically reduces the wear and tear on the reactor in which the fusion occurs. And that means that nuclear fusion reactors could soon be viable. 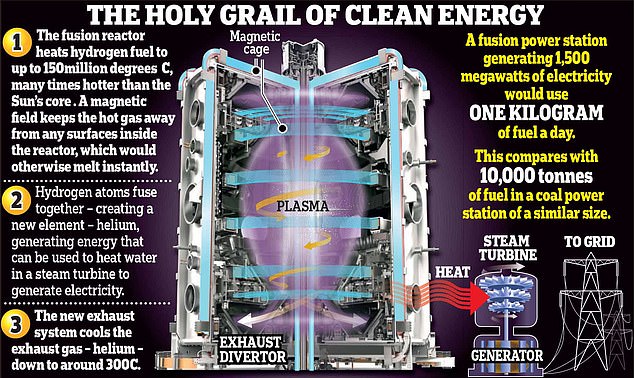 UK scientists have found a way of dealing with these exhaust gases, cooling them from an extraordinary 150million Celsius to just a few hundred degrees, temperatures similar to that of a car engine

Unlike conventional nuclear energy plants, which produce energy by fission – splitting atoms of uranium – they do not result in tons of highly toxic radioactive waste that must be buried for thousands of years.

And they do not create the greenhouse gases that result from burning traditional fossil fuels such as coal, gas and oil.

Scientists at the UK Atomic Energy Authority at Culham, Oxfordshire, made their breakthrough using a £55million experimental fusion reactor called MAST Upgrade, which will be officially opened today.

At its heart is the tokamak, a device that uses a powerful magnetic field to confine the hydrogen isotopes into a spherical shape, similar to a cored apple, as they are heated by microwaves into a plasma to produce fusion.

The key challenge in using tokamaks to produce electricity for the grid has been removing the excess heat produced. 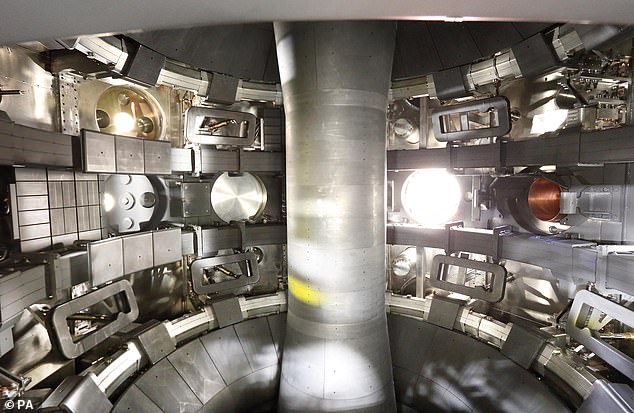 The interior of the MAST Upgrade tokamak. Scientists have successfully tested a world-first concept that could clear one of the major hurdles in developing fusion energy

But the UKAEA team has developed an exhaust system – called the Super-X Divertor – that traps the helium, using a magnetic field, and then diverts it on a longer path until it is cool enough not to damage the walls, which are made from tungsten tiles.

Although tungsten has the highest melting point of any metal, previous designs left the exhaust gas so hot that the tiles became damaged and had to be replaced frequently – a huge expense.

The new divertor means long-promised nuclear fusion could be commercially viable in around 20 years, as UKAEA plans to build a £220million scaled-up version of the MAST Upgrade by the 2040s.

The lead scientist on the project, Dr Andrew Kirk, said: ‘These are fantastic results – the moment our team at UKAEA has been working towards for almost a decade.

It’s a pivotal development for the UK’s plan to put a fusion power plant on the grid by the early 2040s – and for bringing low-carbon energy from fusion to the world.’

Professor Dame Lynn Gladden, executive chairman of the Engineering Physical Science Research Council – which provided the £55million funding for the project – said: ‘These first results from the MAST Upgrade project demonstrate that fusion as an energy source has the potential to radically change the world’s energy supply.’