“I don’t hear any of these Republicans squawking when we give massive tax breaks to billionaires,” Sanders, I-Vt., told ABC “This Week” anchor George Stephanopoulos.

“Suddenly when we do something for working people, it is a terrible idea,” he said.

While Sanders agreed with Biden’s decision to forgive some federal loans — up to $20,000 for Pell grant recipients and up to $10,000 for individual federal loan recipients, both with a $125,000 income cap — the lawmaker also said he would go a step further by making public colleges and universities tuition-free to keep the U.S. “competitive in the global economy.” Sanders has long lobbied for such a move.

Biden on Wednesday announced a three-part student loan relief plan, which he had been considering in some form since before he took office. The program also continues the COVID-19 pause on federal student loans repayments, pushing it through December, with payments resuming in January.

On “This Week,” Stephanopoulos pressed Sanders on the arguments of fairness and scope.

“Several of your Democratic colleagues who are up for reelection this year have criticized [the policy] as well,” he said, citing those who say Biden’s plan isn’t clearly funded, doesn’t address larger school affordability issues and left out people without loans who could still use relief.

Sanders agreed that while not everyone who needs help will benefit from the loan forgiveness, those in need of assistance with student debt should not be ignored.

“Maybe, just maybe, we want to have a government that works for all working people and not just the people on top,” he said.

He renewed his longstanding calls to raise the minimum wage, provide free health care and lower the cost of prescription drugs. 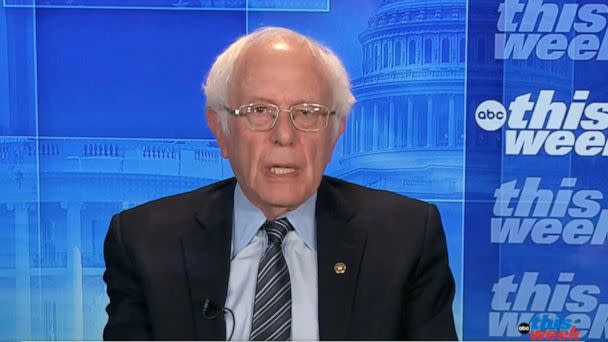 Stephanopoulos pointed out that none of Sander’s proposals will be possible without a Democratic Senate, which will be decided in November’s midterms. Sanders said he thinks the party — with whom he votes on most issues — has a “reasonable chance” of retaining the upper chamber due to the Supreme Court’s ruling striking down nationwide abortion access.

“I think that decision is going to reverberate very poorly for Republicans who think that women do not have a right to control their own bodies,” he contended.

“I certainly hope we get more than 50 [seats] in the Senate, that we get at least 52, so we can start going forward and protecting working people in a way we have not been able to do up to now,” he said.

Stephanopoulos also asked about the affidavit used to justify the FBI search of former President Donald Trump’s Mar-a-Lago home earlier this month in relation to sensitive and classified documents that the government says he took with him when he left the White House. (Trump denies wrongdoing; many Republicans say it is a political attack.)

A redacted copy of the affidavit was released late last week and shows that at least 180 classified documents were recovered from Trump’s estate by the National Archives and Records Administration in February, some of which were labeled as “top secret.”