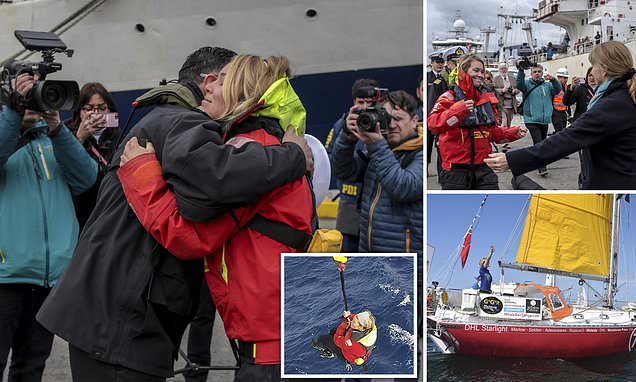 ‘I would do this again in a heartbeat’: Rescued British sailor Susie Goodall says she would take part in round-the-world race again even after she had to be rescued from capsized yacht and spent two days stranded in the Pacific Ocean

A British sailor who was rescued after her boat capsized during a solo round-the-world race has said she would do it again ‘in a heartbeat’.

Susie Goodall’s said she would still go back out to sea hours after arriving back on dry land in the Chilean southern city of Punta Arenas this afternoon, where she was met by her mother and brother.

Despite spending two days stranded in the Pacific Ocean the 29-year-old said she would still agree to take part.

The family smiled and hugged in an emotional reunion before they joined her in an ambulance for a medical check-up in the port city, which is located about 1,200 miles from Santiago.

Yachtswoman Susie Goodall was taken to Chile after getting stranded in the southern Pacific Ocean for two days.

The 29-year-old was competing in a 30,000-mile round-the-world race when her boat lost its mast during a ‘ferocious’ storm 2,000 miles west from Cape Horn in southern Chile’s Tierra del Fuego archipelago. 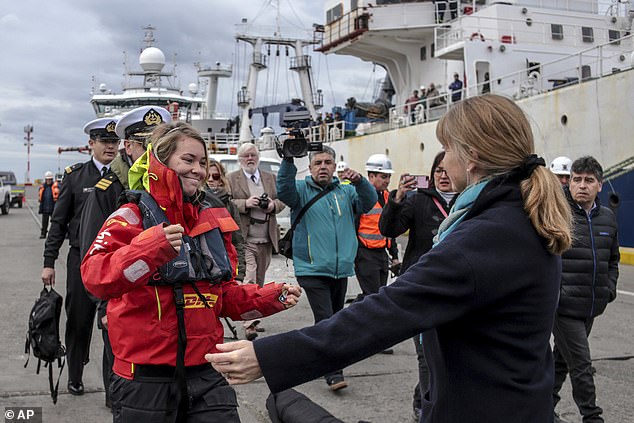 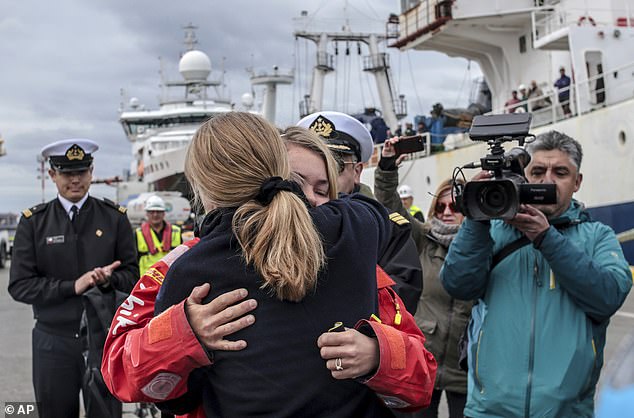 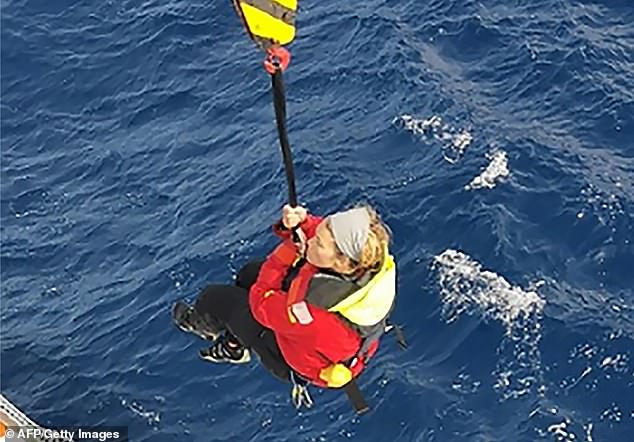 She was rescued by a 40,000-tonne Chinese cargo ship before being brought ashore in Chile by the country’s navy.

Goodall, from Falmouth, Cornwall, was lying in fourth place in the Golden Globe Race when 60-knot (69mph) winds destroyed her Rustler 36 yacht DHL Starlight on December 5.

She said she was knocked unconscious and was ‘thrown across the cabin and was knocked out for a while’ during the ‘massive seas’.

The vessel’s mast snapped, ending her dream of winning the 30,000-mile contest, and she was forced to cling to her bunk for two terrifying days as cargo ship Tian Fu raced to her rescue.

She was hoisted from her stricken vessel and taken aboard the cargo ship where to was transported to Chile.

Her joy at being rescued from her crippled yacht in the Pacific was tempered when she was forced to scuttle the £200,000 vessel earlier this month.

She arrived in Chile today where she embraced her mother after arriving on the cargo ship MV Tian Fu in Punta Arenas. 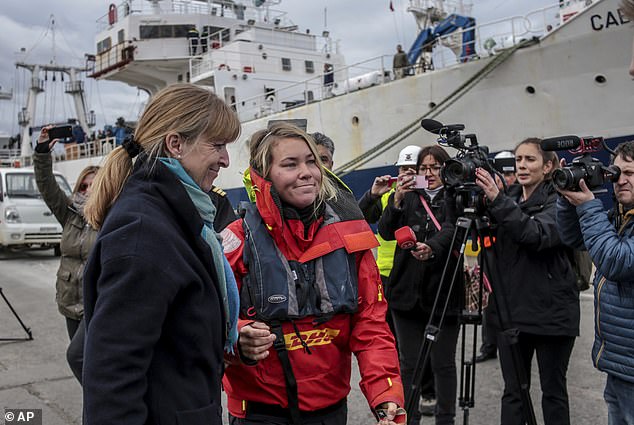 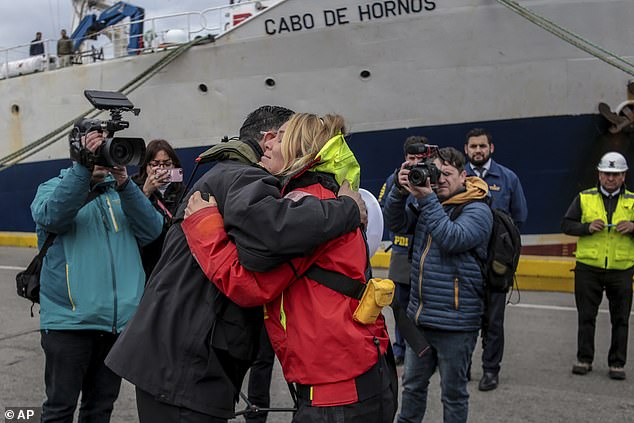 Goodall, who is an ocean sailing instructor who took up the sport at the age of three, also embraced Chilean Navy Comdr. Carlos Cerda after disembarking from the cargo ship.

Goodall said in a blog post she arrived in Chile: ‘After arriving in Punta Arenas today, I’m still a little wobbly both emotionally and physically as I find my land legs again.

‘I arrived with a heavy heart, no longer a competitor in the Golden Globe Race – but here is certainly a lot better than the alternative. And I wouldn’t be here today without the incredible support and seamanship shown by so many people over the past 10 days.

‘Thank you so much to everyone who has followed the race and sent messages of support.

‘If you asked me if I would I do this again, now knowing what it’s really like, I would say yes in a heartbeat.

‘You may ask why?! Some people just live for adventure – it’s human nature. And for me, the sea is where my adventure lies.

‘Every seafarer understands the risks involved but that’s what makes us stronger and able to overcome other challenges in life.’ 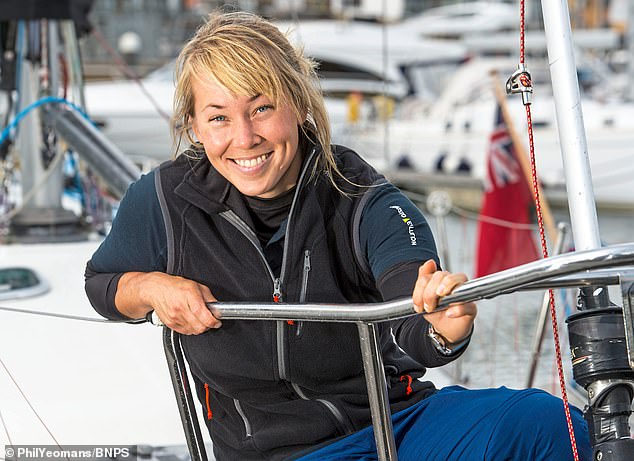 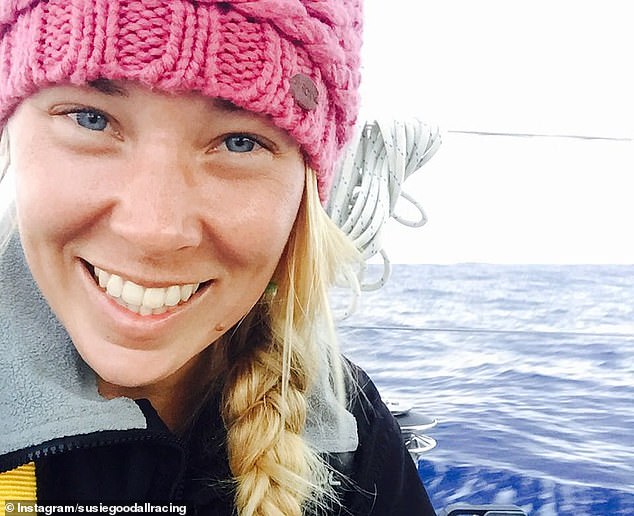 Goodall’s mast on her yacht snapped, ending her dream of winning the 30,000-mile race

The 29-year-old was the youngest entrant and the only woman in the Golden Globe competition that began on July 1 in Les Sables-d’Olonne, France.

The cargo ship rescued Goodall last week after a violent storm ripped off her mast and flung her yacht end over end in the Southern Ocean.

Goodall told officials soon after the storm: ‘I have been dismasted. Thought I had holed the hull because the boat filled with water, but the hull is not holed.

‘The hull is OK. The boat is destroyed. I can’t make up a jury rig. The only thing left is the hull and deck which remain intact.

‘We were pitchpoled [rolled end over end] and I was thrown across the cabin and knocked out for a while.’

Her family said in an earlier message a day after she was rescued: ‘We would like to express our deepest gratitude to everyone involved in the successful rescue of Susie.

‘She managed to get a few hours sleep last night but is struggling to eat or drink. Because of the damage on deck, water is making its way into the boat. The bilge fills every hour, but she can easily pump it out.’ 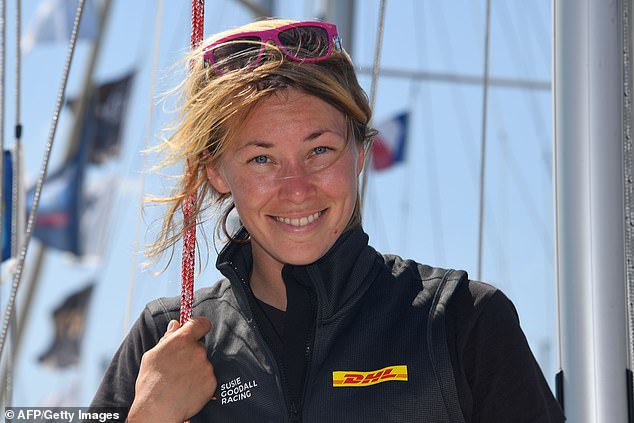 Despite being stranded in the Pacific Ocean for two days, Goodall said she would take part in the race again ‘in a heartbeat’ 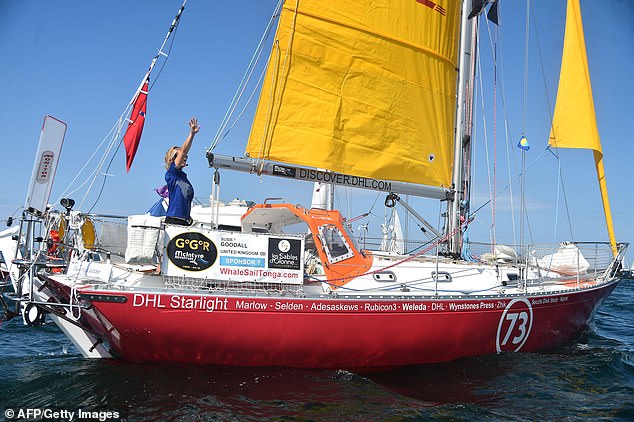 Goodall also thanked those who supported her and described her family as her ‘rock’, adding she did not know what was next on her horizon, apart from spending time with her friends and family over Christmas, but said she still had ‘fire in her belly’.

Ms Goodall added: ‘After 157 days alone at sea and a very emotional week to follow, I was fighting back the tears as I stepped off the ship and saw my mum and oldest brother.

‘I have put them through a lot, and I know I have a lot of making up to do.

‘I can’t tell you what is next beyond spending time with family and friends over Christmas and enjoying a glass of glogg, but that fire in my belly is far from out, so watch this space…!’

Goodall was the fifth Golden Globe Race entrant this year to have abandoned the race due to their boat being dismasted.