Home » World News » Russian soldiers kept women in a basement for 25 days; nine are now said to be pregnant 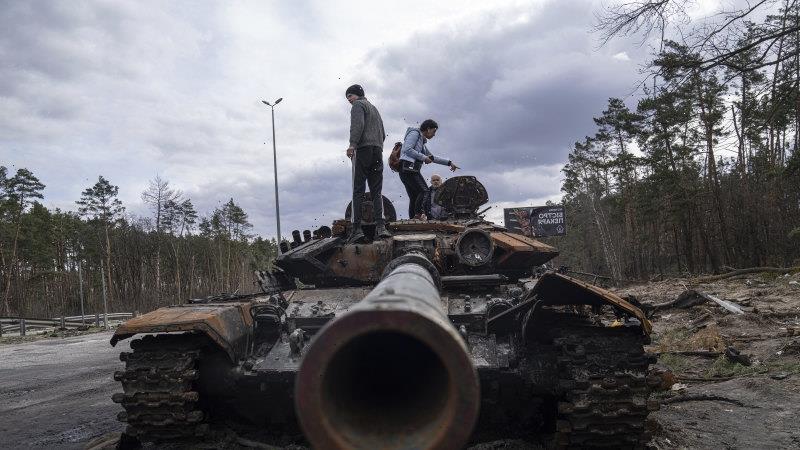 Russian soldiers kept women in a basement for 25 days; nine are now said to be pregnant

London: War crimes investigators have uncovered horrific cases of sexual violence committed by Russian troops in Ukraine, including women and girls kept in a Bucha basement for 25 days. Ukraine’s official ombudsman for human rights, Lyudmyla Denisova, says nine of them are now pregnant.

Denisova said she had recorded multiple cases of rape, torture and abuse by Kremlin forces in Bucha, outside Kyiv, and in other Ukrainian towns as the full extent of the Russian brutality spurred calls for President Vladimir Putin to be charged with crimes against humanity. 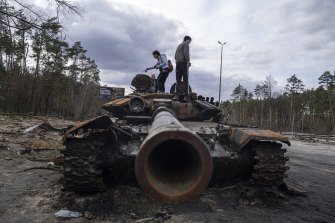 Residents stand on a Russian tank in the outskirts of Kyiv on Monday.Credit:AP

Since Moscow withdrew from northern Ukraine, evidence has surfaced of atrocities committed while Russian troops held the town, including indiscriminate killings, torture and other violence against civilians.

Last week Russia became just the second-ever nation to be suspended from the United Nations Human Rights Council after images were released showing bodies of civilians lying in the streets with bound hands, close-range gunshot wounds and signs of torture.

In unverified claims, Denisova said about 25 girls and women aged 14 to 24 were “systematically” raped during the occupation in the basement of one house in Bucha, leaving nine of them pregnant.

“Russian soldiers told them they would rape them to the point where they wouldn’t want sexual contact with any man, to prevent them from having Ukrainian children,” she told the BBC. 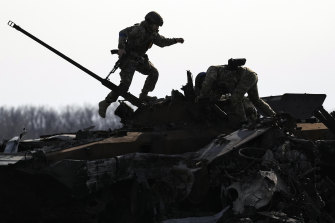 A Ukraine serviceman stands on a Russian tank in Bucha, the scene of a civilian massacre.Credit:AP

In other cases, she said a 14-year-old girl was pregnant after being raped by five men and that an 11-year-old boy was raped in front of his mother as she was tied to a chair. She also claimed a 20-year-old woman was raped by “three occupiers in all possible ways at once” in the Kyiv suburb of Irpin, which Russian forces partially occupied.

“The level of brutality of the army of terrorists and executioners of the Russian Federation knows no bounds – raped children,” she wrote on Facebook.

“There is no place on earth or in hell where racist criminals can hide from retribution!”

She appealed to the UN Human Rights Commission to “take into account these facts of Russian war crimes in Ukraine.”

International laws of war prohibit wilful killing, rape and other sexual violence, torture and inhumane treatment of captured combatants and civilians in custody.

Anyone who orders or deliberately commits such acts, or aids and abets them, is responsible for war crimes. Commanders of forces who knew or had reason to know about such crimes but did not attempt to stop them or punish those responsible are criminally liable for war crimes as a matter of command responsibility.

Investigators from the International Criminal Court are already working in Ukraine to gather and vet evidence, and a number of nations have already referred the case to the global court, signalling a strong push to bring such crimes to trial.

New reports of sexual violence also emerged on Tuesday morning AEST, with the BBC airing an interview with a 50-year-old woman who said she was raped at gunpoint in a rural neighbourhood about 70 kilometre west of Kyiv.

Named only as Anna to protect her identity, she said she was at home with her husband on March 7 when a foreign soldier barged in.

“At gunpoint, he took me to a house nearby. He ordered me: ‘Take your clothes off or I’ll shoot you.’ He kept threatening to kill me if I didn’t do as he said. Then he started raping me,” she said.

She said her attacker – a young, thin, Chechen fighter allied with Russia – was taken away by a separate unit of Russian soldiers when they discovered the crime. Her husband was shot in the abdomen and later died.

Andrii Nebytov, the police chief of the Kyiv region, told the British broadcaster about another case being investigated involving a couple in their 30s and their young child in a small village.

“On 9 March, several soldiers of the Russian army entered the house. The husband tried to protect his wife and child. So they shot him in the yard,” Nebytov said.

“After that, two soldiers repeatedly raped the wife. They would leave and then come back. They returned three times to rape her. They threatened that if she resisted they would harm her little boy. To protect her child she didn’t resist.”

He said when the soldiers left, they burnt down the house and shot the family’s dogs.

Russia has repeatedly denied targeting civilians and said images of bodies in Bucha were staged by the Ukrainian government to justify more sanctions against it and derail peace negotiations.

Why egg prices are soaring