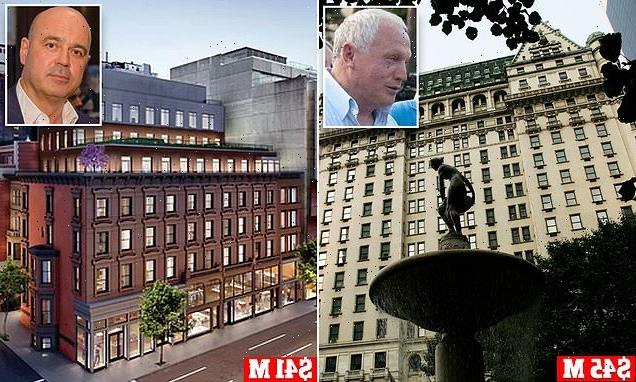 Russian oligarchs rush to sell their multi-million dollar properties on Manhattan’s Billionaire’s Row before asset freezes and sanctions: Iconic Plaza Hotel apartment among the 70 plus properties being quietly shopped around

Russia’s wealthiest are trying to quietly sell their Manhattan properties, it has been claimed, amid fears that they could soon face sanctions.

As oligarchs’ yachts are impounded around the world and their assets frozen in a bid to pressure Vladimir Putin to end the war in Ukraine, some Russians are preemptively trying to cash in on their New York property.

Russian real estate investments are worth at least $1 billion, according to reports.

Some 61 properties have already gone on the market or dropped prices, according to Fox Business, and at least another 70 are considering so-called ‘whisper sales’ – getting rid of a property privately, without putting it on the market.

She told Fox that her firm received calls from Russian clients looking to potentially ‘whisper list’ between 50 and 70 properties, mostly in Manhattan, within the last week.

‘They’re not pulling the trigger yet. They’re getting ready to pull the trigger.

‘Meaning, ‘Yes, I’ll take whatever the best offering can get me’.

‘That could be what comes down the pike. So really, depending on sanctions, and you know where we are with everything, that’s all we see potentially is playing out.’ 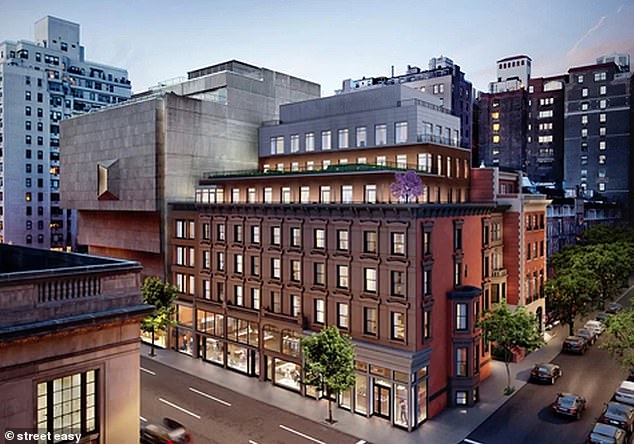 Alexei Kuzmichev, 59, an owner of Alfa-Bank – Russia’s largest private bank, which has been slapped by US sanctions — has listed his $41 million Manhattan quadruplex (pictured) 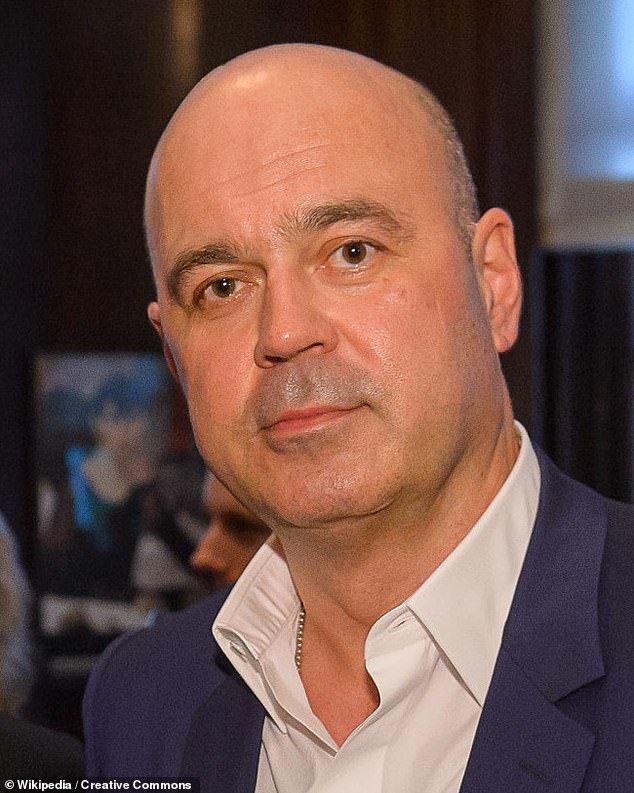 Kuzmichev is worth an estimated $6.2 billion 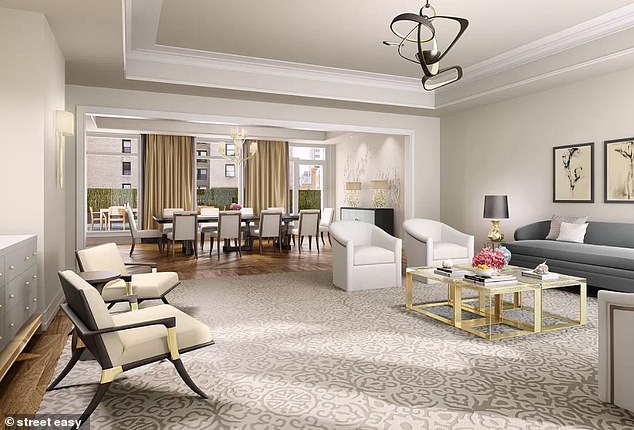 Kuzmichev’s home is listed for $41 million, on the Upper East Side 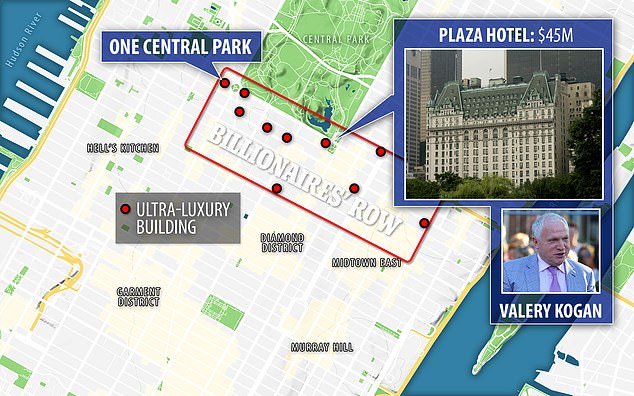 Many of the listings have been on Manhattan’s ‘Billionaire’s Row’, according to real estate agent Dolly Lenz

Many of the listings were on Manhattan’s ‘Billionaire’s Row’, Fox reported.

Not all of the listings have been private.

Alexei Kuzmichev, 59, an owner of Alfa-Bank – Russia’s largest private bank, which has been slapped by US sanctions — has listed his $41 million Manhattan quadruplex.

His neighbor is Bob Iger, ex-CEO of the Walt Disney Company, who owns the penthouse.

Forbes estimates that the financier is worth $6.2 billon.

Another looking to sell is Valery Kogan, the billionaire owner of Moscow’s Domodedevo Airport, and his wife Olga.

The pair are quietly shopping their apartment at the Plaza Hotel for $50 million, according to sources who spoke to The New York Post.

They are also selling their other Upper East Side home, at 515 Park Avenue, plus an Upper West Side residence at 15 Central Park West.

The couple also intend to sell a Greenwich, Connecticut estate at 18 Simmons Lane, The Post reported. 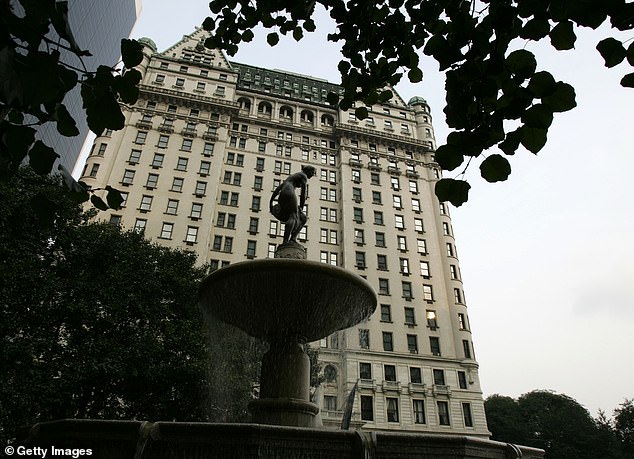 Valery Kogan is looking to sell his property inside the Plaza Hotel, according to reports 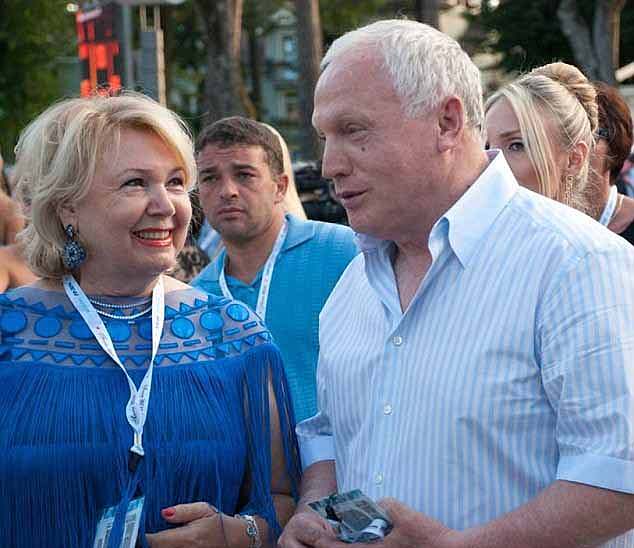 Lenz said she had a large number of Russian clients a decade ago, but in recent years they have been replaced by those fleeing Hong Kong or Taiwan.

‘And they’re only out there now because they want to liquidate ahead of a crisis.

‘If you ask me to guess because obviously not everybody’s telling you everything they’re thinking, nor should they.

The bill would require LLCs to disclose their owners to the New York Department of State and would create a public database of which LLCs share common ownership.

It asserts that anonymous LLC landlords have caused code violations for years in the Hudson Valley, prompting a 2019 state senate investigation, as well as tens of thousands of pandemic-era rental assistance applications to be unnecessarily delayed.

But the use of LLCs to purchase high-end real estate is a common practice, so it’s unclear if the proposed legislation will be considered.

‘Every single purchaser we’ve ever had created a new LLC for each and every property. I think the majority of wealthy people purchase an LLC for every reason in the world,’ Lenz said.

‘We would welcome any transparency to every transaction. We personally go the extra yard to make sure we know who we’re dealing with.

‘Even though we don’t have (know-your-client) rules in real estate like they do in banking – have to vet everyone they talked to – we don’t have to, but we do.

‘We don’t want to talk to anybody we think is unsavory,’ she added.

Once Upon a Time in Hollywood: Where Sharon Tate’s Manson murderers are now
World News