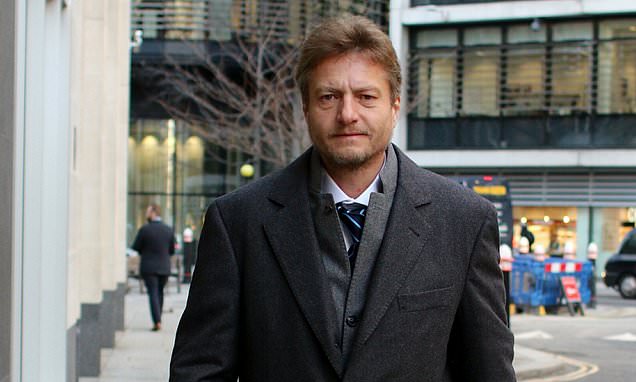 Vladimir Chernukhin arriving at the High Court. Vladimir a Russian oligarch, and former minister to President Putin is locked in a high court battle with Oleg Deripaska

The husband of a Tory donor has defeated a billionaire Vladimir Putin ally in a multi million pound legal battle in London, after claiming gangsters took over his Moscow textile factory.

Businessman Vladimir Chernukhin, 49, told the High Court how he had a stake in a lucrative factory in Moscow but another fiscal titan with shares in the business attempted to force him out.

Chernukhin said an armed takeover of the TGM in December 2010 was carried out by gangsters led by Oleg Deripaska, 50.

The court heard how Mr Chernukhin’s former lover Lolita Danilina joined forces with Mr Deripaska to overturn an arbitration hearing which ruled if Deripaska wanted to own all of TGM he must pay £74 million.

Mr Chernukhin, a former Russian Finance Minister, who is married to Lubov, 46, who made the headlines in Britain when she gave the Conservative Party a total of £600,000, beat their case.

The court rejected arguments forwarded by Danilina that she was entitled to property, artwork, and supercars from their 16-year relationship.

Speaking outside of court a spokesperson for Mr Chernukhin , said: ‘The court’s findings have resoundingly rejected Deripaska’s and Danilina’s claims and are entirely consistent with Mr Chernukhin’s evidence to the court, both the documentary evidence and his oral evidence given during his four days of cross-examination.

‘By contrast, Deripaska was yet again found to have lied to the arbitral tribunal and the court and to have knowingly put forward a false case.

‘The judge also found that Danilina gave dishonest evidence to the Court that she was in reality Deripaska’s joint venture partner.

‘The judge found that Danilina was offered $15 million by Deripaska if she won her claim. This is in effect a corrupt agreement to deceive the English courts.’

He said the case was an attempt to subvert justice ‘which was thankfully brought to light and thwarted.’

In a heated exchange with Mr Deripaska’s lawyer, Justin Fenwick, QC, Mr Chernukhin told how he did not trust the Russian legal system.

Becomingly increasingly impassioned in his evidence he said: ‘I was with smoking gun next to my head.

‘I was dealing with gangsters. It was not a comfortable situation like Mr Fenwick says at all. I had already lost everything.

‘I did not believe them. If I put shares under Russian law, they would disappear tomorrow.

‘That was why we agreed under Swiss law.’ 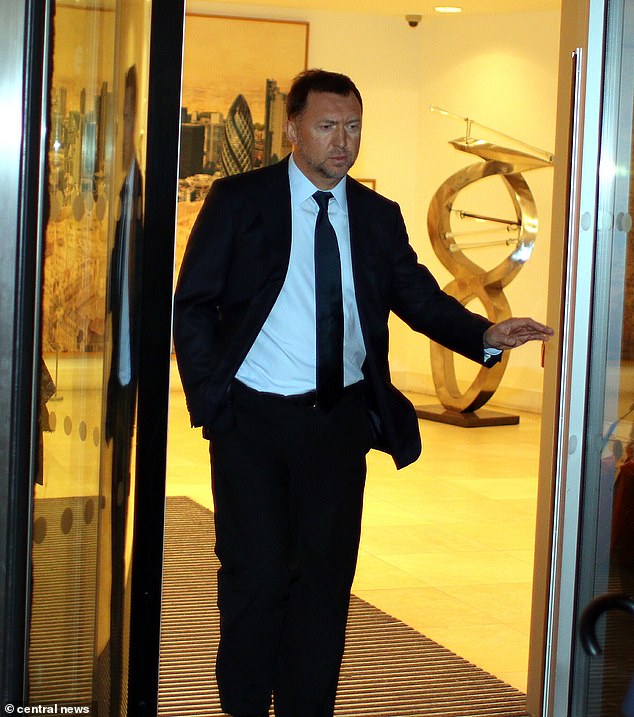 When asked by Mr Fenwick who the gangsters were, Mr Chernukhin said: ‘Who stole my property.’

Asked which property, his reply was: ‘TGM’.

The lawyer and businessman sparred over his supposed secrecy and whether his estranged lover, who is also fighting him in court, was owner of 50 per cent of TGM.

Mr Fenwick said: ‘You consistently refused to prove any ownership whether legal or beneficial. Nobody had told Mr Deripaska that the shareholders agreement was not with Mrs Danilina but was with you.’

Mr Chernukhin argued Mr Fenwick’s claims were wrong and stressed he would have provided proof of ownership under Swiss law.

She argued that Mr Chernukhin fabricated a tale of espionage and double-dealing to disguise her ownership of the lucrative 22-acre factory site in the heart of Moscow.

But on his third day in the witness box Mr Chernukhin claimed he asked Mrs Danilina to be his front, fearing of reprisals following his falling out with the Kremlin.

He claimed he was unwilling to sign documents under Russian law as they could be used to reveal his financial interests.

Mr Chernukhin said he was prepared to put pen to paper in Switzerland but claimed no money from Mr Deripaska ever materialised.

He fled from Russia shortly after he and his mentor, former Prime Minister Mikhail Kasyanov, were shut-out of the Russian government in a political cleansing.

Upon arriving in London, he struck up a relationship with his now wife, Lubov, 46, who made the headlines after giving the Conservative Party a total of £600,000.

Her generosity, namely £30,000, bought her diner with Defence Secretary Gavin Williamson, while another £130,000 secured an afternoon of tennis sets with Boris Johnson.

It was further rumoured Mr Deripaska was paying for Mrs Danilina’s legal costs.

Mr Crow had challenged both Mr Deripaska and Mrs Danilina that the money was being offered to ensure their evidence matched and was dishonest.

Both vehemently denied the suggestion.

Mr Chernukhin and Mrs Danilina are also engaged in a spat centring on assets Mrs Danilina claims were shared between the two during their relationship..

She argued in documents seen by the court, show her relationship with Mr Chernukhin was akin to marriage and she is therefore entitled to continued financial support.

Mr Chernukhin denied this claim and argued various trusts and monies in her name were protective measures against possible attacks.

He told the court he stopped paying for her ‘lifestyle’ in 2012 when he claims she began to sell valuable artwork belonging to him.