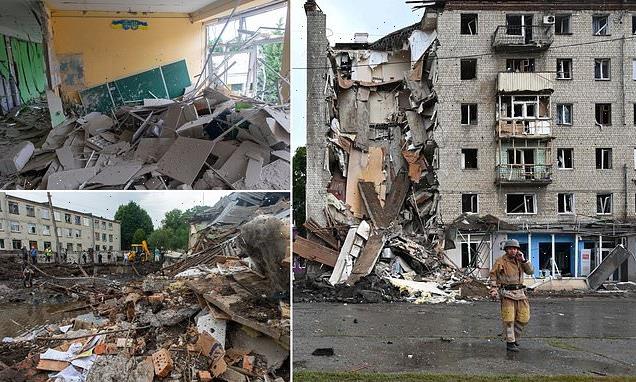 A school, a block of flats and a factory were blown up in the city of Kharkiv in three separate attacks launched from Russia between Sunday and Monday morning.

Syneihubov said the targets were ‘exclusively civilian’ as he bashed Putin’s commanders for what he called ‘absolute terrorism.’ 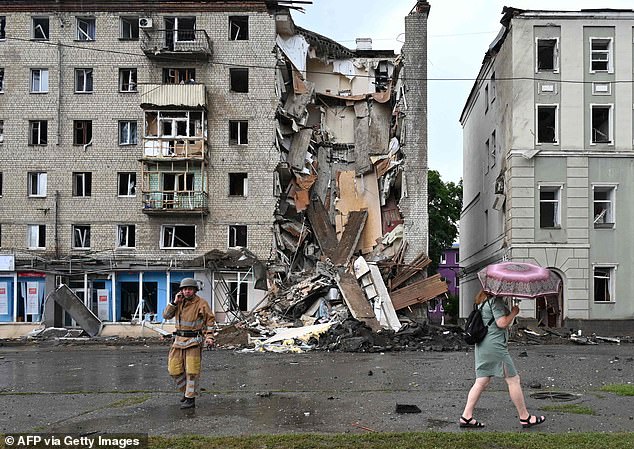 A Russian missile hit a block of flats in Kharkiv overnight, as Ukraine’s second-largest city came under bombardment 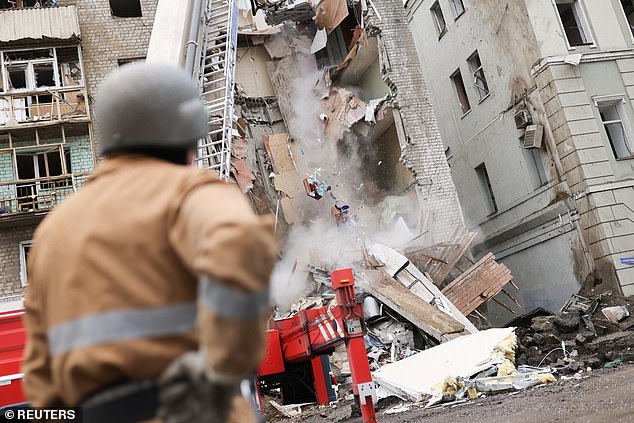 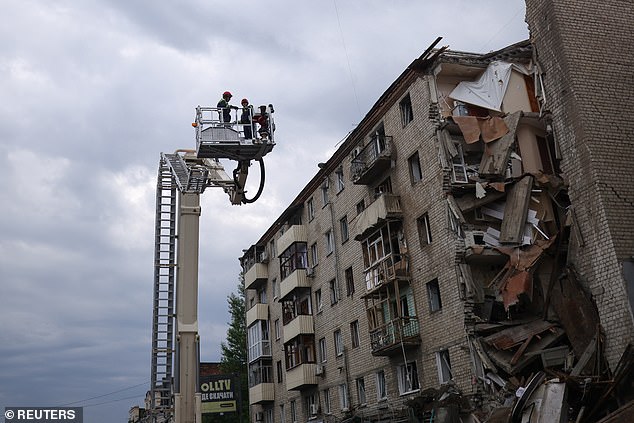 Russia has stepped up its attacks on civilians as its offensive in the east of Ukraine stalls, with Kharkiv’s governor accusing Putin’s generals of ‘absolute terrorism’

Russia has stepped up its attacks on civilians as its offensive in the east has ground to a halt, with rockets hitting an apartment block in Chasiv Yar on Saturday.

At least 19 people have died in the attack on the town – which is mostly inhabited by workers from the nearby factories – though rescue efforts are continuing.

But since then their attack has stalled, with Kyiv saying it appears commanders are taking an ‘operation pause’ to regroup and rearm before attacking again.

However, that has not stopped Russian artillery units from shelling nearby towns.

The governor of the Luhansk region said on Monday that shelling hit settlements on the administrative border with the Donetsk region.

The Luhansk and Donetsk regions make up Ukraine’s eastern industrial heartland known as Donbas, where separatist rebels have fought Ukrainian forces since 2014.

Russia earlier this month captured the last major stronghold of Ukrainian resistance in Luhansk, the city of Lysychansk.

After the seizure of Lysychansk some analysts predicted Moscow’s troops would take some time to rearm and regroup but Ukrainian officials said there has been no pause in attacks.

The British military assessed that Russian troops were not getting necessary breaks.

The Ministry of Defence wrote on Twitter that online videos suggested at least one tank brigade in the war was ‘mentally and physically exhausted’ as it had been on active combat duty since the start of the war in February.

The MoD said: ‘The lack of scheduled breaks from intense combat conditions is highly likely one of the most damaging of the many personnel issues the Russian (defence ministry) is struggling to rectify amongst the deployed force.’

Once Russia’s ‘operational pause’ has ended, its next targets are likely to be the cities of Slovyansk and Kramatorsk – a short distance from Lysychansk.

Taking those two cities would put Russia in control of a sizable chunk of Donetsk province, which makes up the Donbas together with Luhansk.

Since failing to take Kyiv, Putin claims control of the Donbas is now his sole war aim. 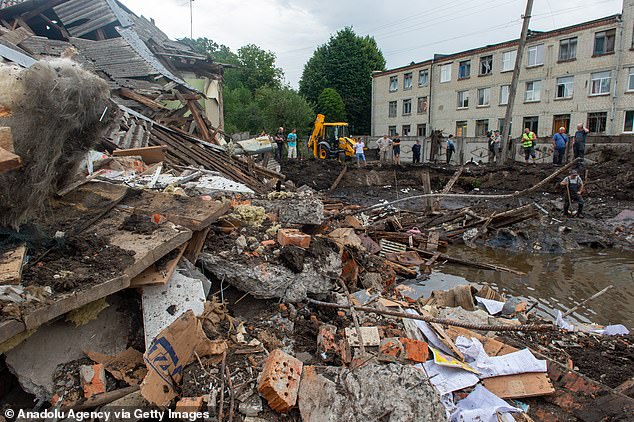 Local residents clean up the rubbles and debris after a Russian missile strike in the south of Kharkiv, Ukraine 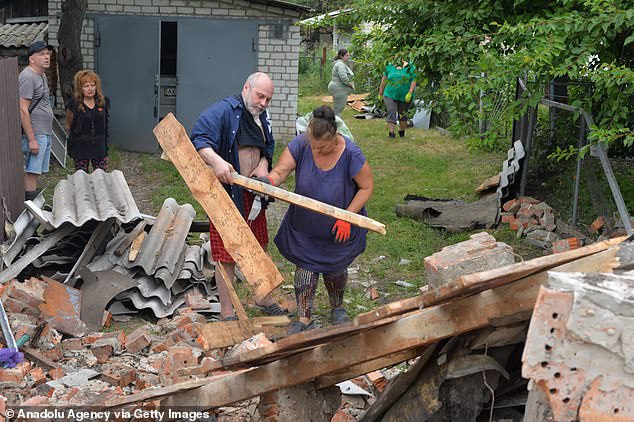 Kharkiv was hit three times in 24 hours between Sunday and Monday morning, including this hit on a cilvian neighbourhood 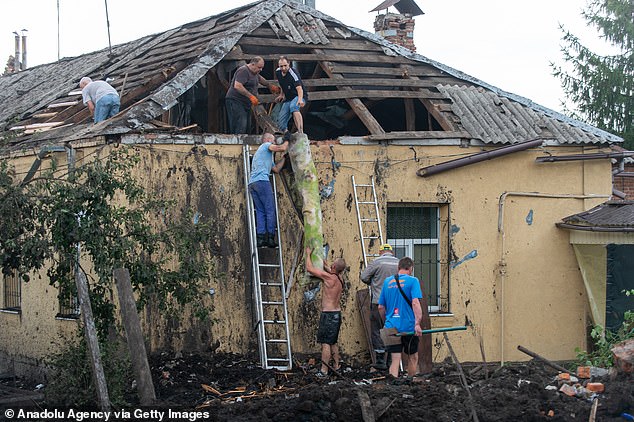 But his army will also have to commit men to defend portions of Ukraine’s south, as Kyiv says a major counter-attack is about to begin.

Oleksii Reznikov, the Ukrainian defence minister, says President Zelensky has ordered his generals to come up with a plan for recapturing the south of the country – much of which was seized by Putin’s men early in the war.

Ukraine withdrew many of its forces from southern areas shortly before Russia invaded to focus on keeping the capital of Kyiv intact.

But now, after Russia failed to take the city and withdrew, Zelensky appears to be making a return to the south in greater force his priority.

Reznikov told The Times that Ukraine’s armed forces is now 1million-strong, as he lobbied western leaders for more weapons to get the job done.

Kherson, a key strategic city that spans the Dnipro River and is the only regional capital to fall to Putin so-far, is the early target.

Other areas currently occupied by Russia that are likely to be high on Ukraine’s hit-list are Enerhodar – which houses the Zaporizhzhia nuclear power plant – the port city of Berdyansk, and the city of Melitopol.

Ukraine’s long-term ambition will certainly be the re-capture of Crimea – annexed by Russia in 2014 – from Putin’s men, but the peninsula is essentially one big military base and attacking it would be extremely challenging.

Twelve Russian officers are thought to have been killed in a single rocket strike as Ukraine’s armed forces inflict punishing losses with American-supplied weapons.

The attack targeted a command post in at Chornobaivka Airport, near the occupied southern city of Kherson, and is rumoured to have killed at least one general and one colonel. It is thought to have been carried out using US HIMARS rockets.

Video shows what appears to be an ammunition dump at the base exploding, as Russian Telegram channels report Putin is infuriated at the inability of Russia’s S-400 anti-air systems to protect his armed forces.

It comes as Ukraine readies its million-strong military for a major offensive around Kherson, aiming to recapture territory seized by Russia early in the conflict. 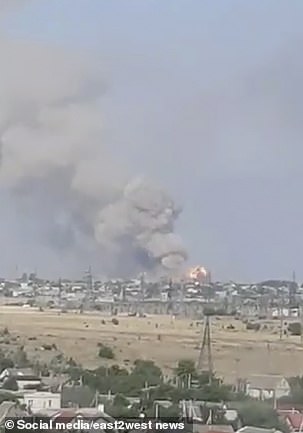 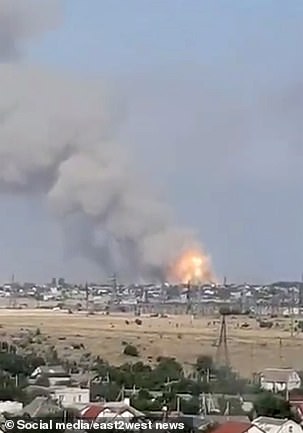 Twelve Russian officers, including a general, have reportedly been killed after Ukraine struck a command post and ammo dump near Kherson using American rocket systems (pictured) 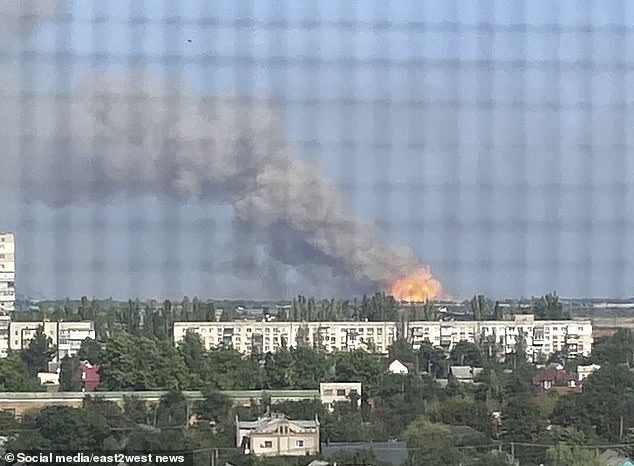 Defence minister Oleksii Reznikov revealed President Zelensky has given his generals orders to draw up plans for the attack and come up with a list of equipment they need to get the job done.

Reznikov says his job will then be to go to Ukraine’s western allies and make the case for those weapons to be handed over, as he did with HIMARS.

‘We’re people of the free world and with a real sense of justice and liberty,’ he told The Times.

‘We have approximately 700,000 in the armed forces and when you add the national guard, police, border guard, we are around a million strong.’

Chornobaivka Airport – where the latest HIMARS attack took place – is a strategically important airfield located in Ukraine’s south that was captured by Russia in early in the war, and now serves as a military airfield.

It is hardly the first time the airstrip has been targeted by Ukrainian attacks, as a series of bombardments early in the war destroyed dozens of helicopters and inflicted heavy losses on Putin’s men. 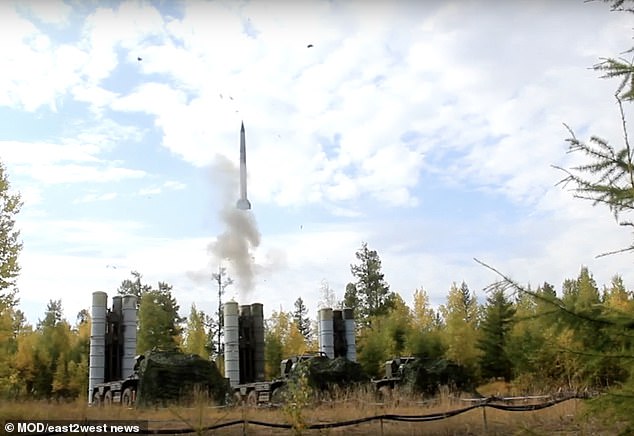 Putin is said to be furious at the seeming inability of his latest-generation anti-air system, the S-400 (pictured), to take down the HIMARS rockets 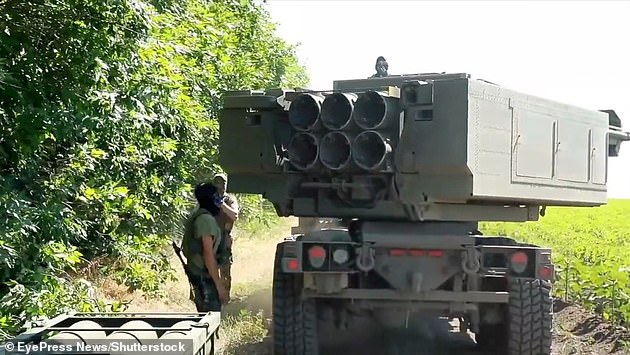 But as the frontline pushed further to the west, the airfield dropped out of range of Kyiv’s men. However, with the arrival of American rocket systems it can be hit again.

The airfield is located close to Kherson, which is the only regional capital to have fallen to Putin’s army and is set to be the focus of Ukraine’s fight-back.

He added: ‘The centres are small but important. I will not write here where, when, how much, and who [was hit] in order not to give out military secrets.

‘My question is simple: when will this bull**** end?

‘Can you **** the military-industrial complex so that we finally have the preventive [means to stop these missile attacks].’

A column of Russian tanks has been destroyed in an artillery strike by Ukraine in the eastern Donbas region, with part of the strike caught on video.

Ukraine’s 24th Mechanized Brigade said a dozen tanks and armoured vehicles were destroyed or damaged in the strike, while took place last week in Luhansk province.

In a double-blow for Putin’s military, it was also claimed his soldiers mistakenly destroyed a battalion of their own conscripts after mistaking them for the enemy. 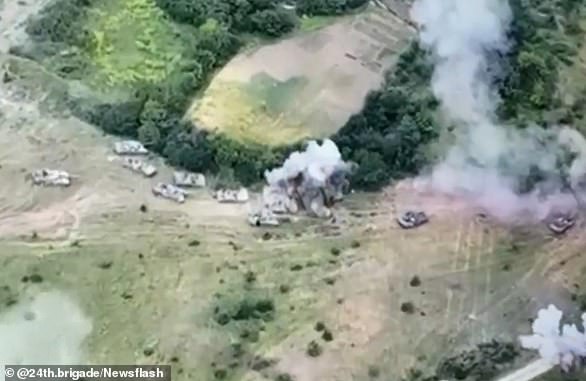 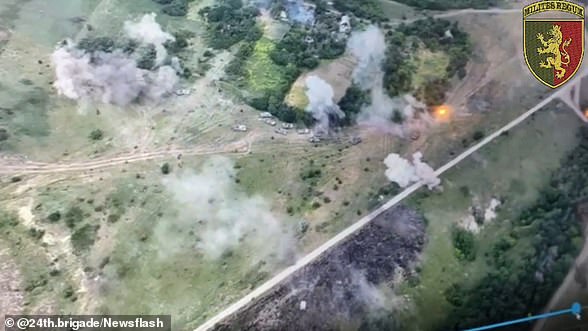 Ukraine say around a dozen Russian tanks or armoured vehicles were destroyed in the barrage, which took place in the Luhansk region

A call intercepted by Ukraine’s spies captured a conversation between a soldier serving the so-called Donetsk People’s Republic and an unknown second person.

In it, the soldier can be heard saying that he and his men – most of whom will have been forcibly conscripted into the armed forces by Russia – were stationed near the occupied port city of Berdyansk.

But they were suddenly redeployed to the frontlines – contrary to Putin’s claim that conscripts are not fighting the war – and ordered to attack.

After failing to receive orders, the men began to retreat when they encountered soldiers of the regular Russian army who mistook them for Ukrainians.

‘The Russians destroyed them… That’s the army, guess what,’ the man says.

He is also captured complaining that none of the conscripted men have been paid, and that food rations were meagre.