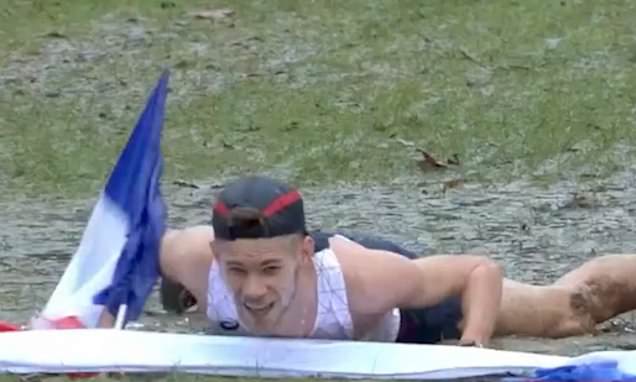 ‘His big moment and he fluffed it!’ Runner’s celebration goes horribly wrong as he tries to cross the finish line with a knee slide… only to end up face first in the mud

An athlete’s attempt to cross the finish line in style went hilariously wrong when he got stuck in the mud after attempting a knee slide.

Jimmy Gressier, 21, won gold in the under-23 men’s European Cross Country race in Tilburg, Netherlands, today but his final moments on the track went less to plan.

As the runner, who is holding two French flags, sprints towards the end he drops to his knees in preparation for a slide across the line to victory.

However instead of leaning back and cruising across, his knees stick to the mud and he ends up flying forwards and face-planting the finish line. 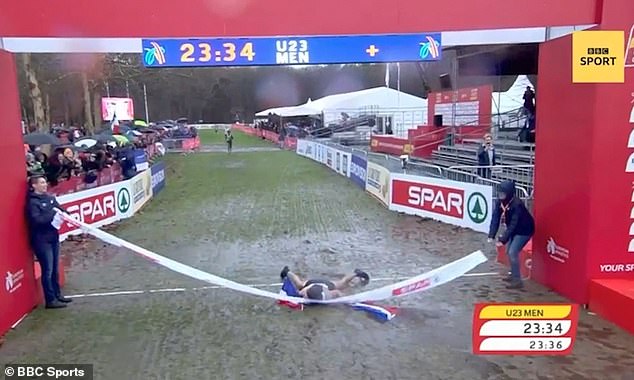 Jimmy Gressier, 21, falls forward into the mud after trying to knee slide across the finish line in the men’s under-23 European Cross Country race in Tilburg, Netherlands

But the Frenchman takes it in his pride and still clinging to his countries flags, quickly gets back on his feet and walks to the side of the muddy track.

The BBC Sport commentator can be heard laughing throughout footage of the attempted slide and says ‘his big moment and he fluffed it’ as the moment is shown again.

The video is replayed multiple times with two commentators admiring Jimmy’s efforts and hoping that he hasn’t ‘injured himself’ in the attempt.

Jimmy defended his under-23 title today with a time of 23:37, eight seconds ahead of German Samuel Fitwi. 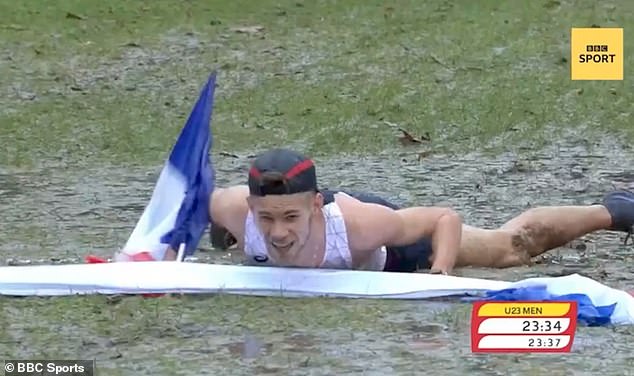 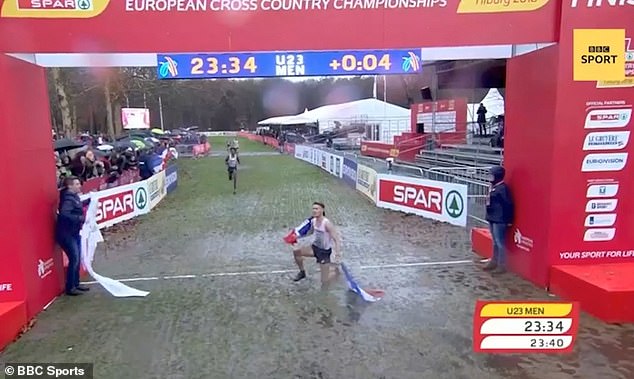 In an interview after the race Jimmy said: ‘The conditions of the race were difficult. But still the course was really nice despite of the weather conditions.

‘The biggest difference compared to last year is the fact that I was the one who was chasing then. This year I was the one getting chased.’

It is organised by the European Athletic Association and is held in December each year. The championships started in 1994 in Alnwick, Northumberland.