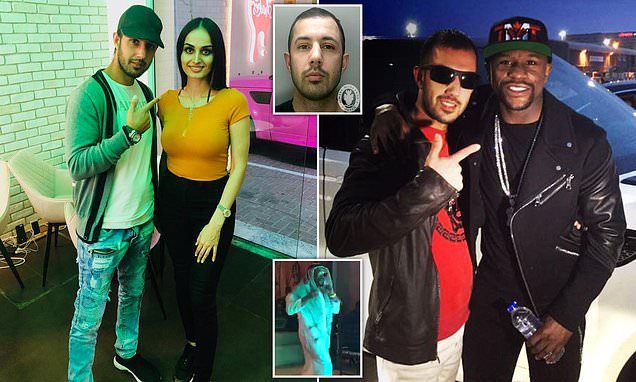 Runaway fraudster boasts of playboy lifestyle living it up in Dubai

Catch me if you can! Ferrari-driving runaway fraudster boasts of his playboy lifestyle living it up in a Dubai penthouse – and partying with Floyd Mayweather, Buster Rhymes and Lana Rose

A runaway fugitive is boasting of his life of luxury in a Dubai penthouse being chauffeured to VIP parties and hanging out with Floyd Mayweather while sticking two fingers up to British justice.

As the UK shivers in sub-zero temperatures, bling-loving Zahid Khan wears designer clothes and sports a Rolex watch and is basking in nearly 30-degrees heat.

Speaking exclusively to MailOnline, he bragged: ‘I wish I’d moved here five-years ago’.

The 31-year-old skipped bail and fled the country just days before being jailed for ten years for his part in a £500,000 car number plate scam – leaving his brothers and cousin, who were jailed, to take the rap. 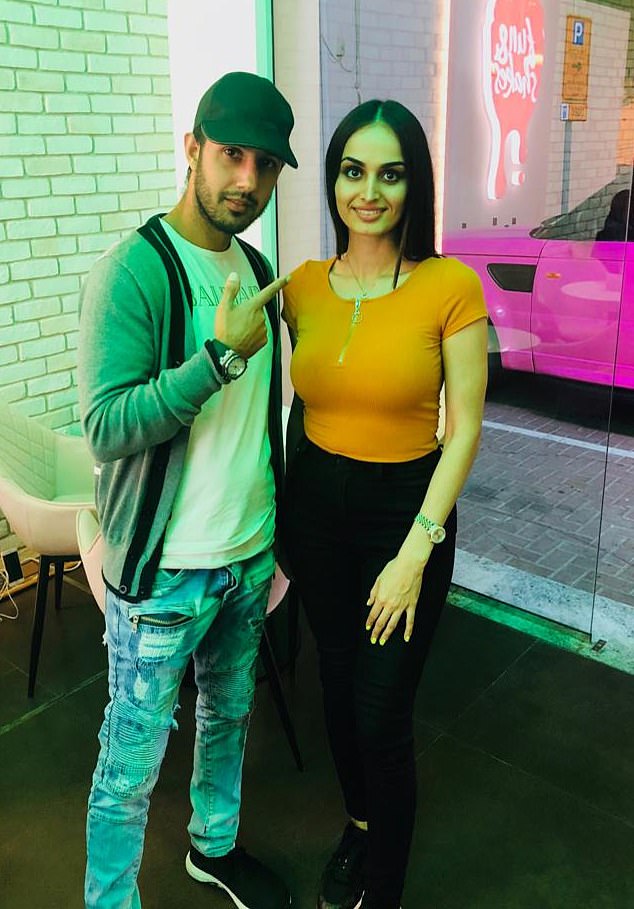 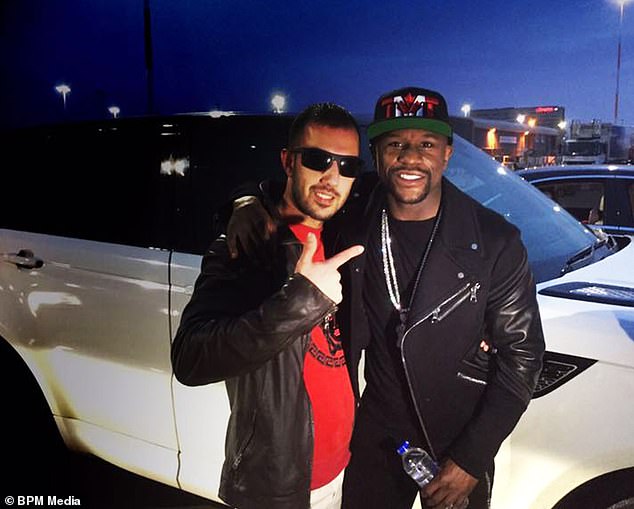 The father-of-three, from Birmingham, said that he would only return home if the Prime Minister could personally assure him of his safety because he said his life is under threat from members of the EDL.

He whined that he escaped to the Middle-East because he was the victim of ‘corrupt’ police who are waging a ‘personal vendetta’ against him which resulted in him not getting a fair trial. 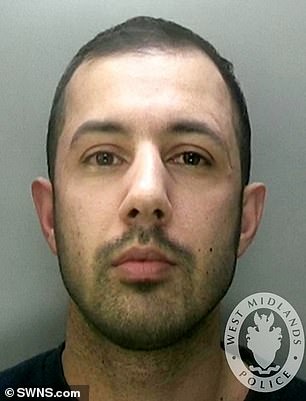 However, as these exclusive videos show, he was free to attend a celebrity belly-dancing party two months ago with boxing legend Mayweather when he should have been behind bars.

He said: ‘It was a great night and Floyd was brilliant, shadow boxing while the dancers were performing, he was loving it.

‘He’s a lovely guy and an inspiration. A lot of people say he’s arrogant but if you get to know the guy, he’s very down to earth and humble.

‘I know a lot of celebrities but you know what? Money does not buy you respect, you have to earn it.

‘I must be doing something right for me to be around rich, famous people because they won’t have any Tom, Dick or Harry around them – only genuine people who have got respect from the community.’

Khan, whose wife and children still live in Birmingham, filmed himself meeting U.S star Busta Rhymes last month at a glitzy Christmas party in Dubai in which the rapper leans over his shoulder and calls him ‘his bro’.

He has also met YouTube singing sensation Lana Rose and said: ‘All the celebrities I meet are very, very nice to be honest, they’re not how people make them out to be.

‘They have to have their guards up because you could be anyone, but once you get introduced to them or once you know them it becomes different.

‘You’ve got celebrity parties every other day here and there is wealth all around. Dubai is the only place in the world that you can see someone walking their pet lion down the beach on a lead!’

Khan flew 3,500 miles across the world before the end of his fraud trial – which involved stealing the rights to car number plates and selling them on illegally. 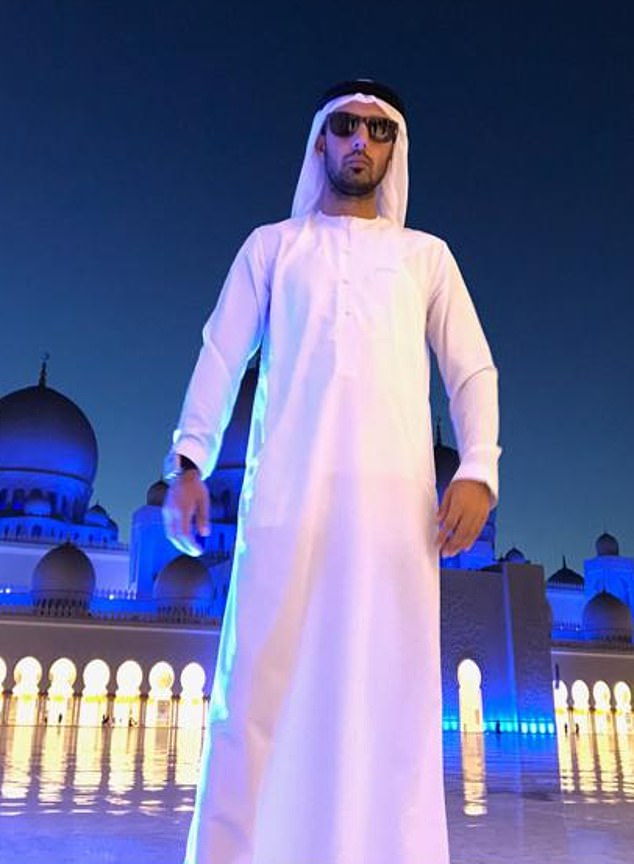 Khan, whose fraud also targeted EuroMillions winner Gillian Bayford, says he wished he had moved to Dubai five years ago while his wife and three children are back home in Birmingham

Khan recently posted a bizarre online video from his hideout in which he claims to smash up a £30,000 Rolex (pictured)

Among his victims were EuroMillions winner Gillian Bayford, who scooped a £148million jackpot in August 2012.

During his ten week trial at Birmingham Crown Court, he was granted bail and allowed to keep his passport which enabled him to jump on a plane and flee.

He was convicted in his absence of conspiracy to commit fraud, perverting the course of justice, plus concealing and converting criminal property.

He also admitted three counts of fraudulently obtaining car insurance and was convicted on a fourth count he’d denied.

But while his brothers Aamir and Ayan and cousin Zubair Ahmad were convicted and jailed for their part in the scam, Khan is now living the high life.

His new home is a flash penthouse at the top of a towering apartment block.

He confessed: ‘I’m not working at the moment but I’ve got good friends, I’ve got people around me who are supporting me in the situation I’m in.

‘They’ve given me a place to live which is really lovely, it’s wonderful, fantastic and I’m really grateful.

‘There’s a lot of business opportunities in Dubai, everyone says it’s strict but it’s not, there’s nightclubs everywhere and people have a good time and enjoy life. I wish I’d moved here five years ago.’ 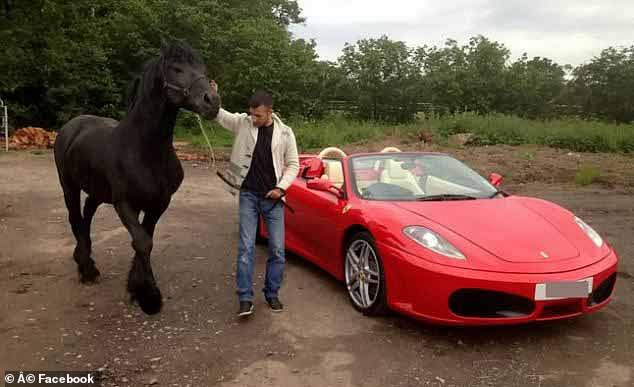 Back in Birmingham Khan drove a fleet of luxury cars including a red Ferrari (pictured) and a £200,000 white Ferrari Spider 458, which was crushed by police

Back in his home town of Birmingham the millionaire Playboy conman used to drive a £250,000 Ferrari 458 Spider until it was seized and crushed by police.

Now he says he doesn’t even need a car and boasted: ‘I get chauffeured everywhere.

‘Everyone’s got nice cars here, having a Rolls Royce in Dubai is like having a Toyota Corolla in the UK. It’s no big deal, nobody blinks an eye if you drive past in a Ferrari.

‘The weather is fantastic as well, its 30 degrees Celsius in the winter.’