Rome Villa valued at $538m where princess lived will be REAUCTIONED

Rome Villa valued at $538m where Texas-born Italian princess, 72, has lived for two decades with the world’s only Caravaggio ceiling mural worth $354m will be REAUCTIONED as part of ongoing inheritance battle with her stepsons after it fails to sell

A villa in Rome where a Texas-born Italian princess has lived for two decades with the only known Caravaggio ceiling mural will be re-auctioned after it failed to sell.

The Casino dell’Aurora, also known as Villa Ludovisi, has been in the Ludovisi family since the early 1600s but became the subject of an inheritance dispute after Prince Nicolò Boncompagni Ludovisi died in 2018.

Rita Jenrett Boncompagni Ludovisi, formerly known as Rita Carpenter, was set to be kicked out of her $538million Rome villa amid the ongoing dispute with her stepsons after the property went on a court-ordered auction block on Tuesday.

But the Casino dell’Aurora, also known as Villa Ludovisi, is set to be re-auctioned in the coming months with a lower starting bid after no winning bid was entered. 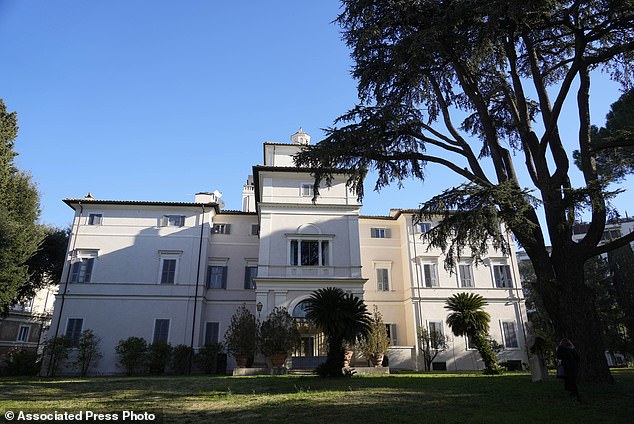 The Casino dell’Aurora (pictured), also known as Villa Ludovisi, has been in the Ludovisi family since the early 1600s but became the subject of an inheritance dispute in 2018 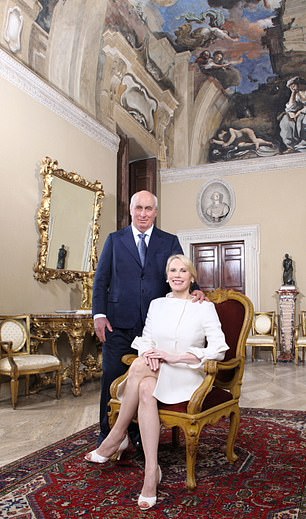 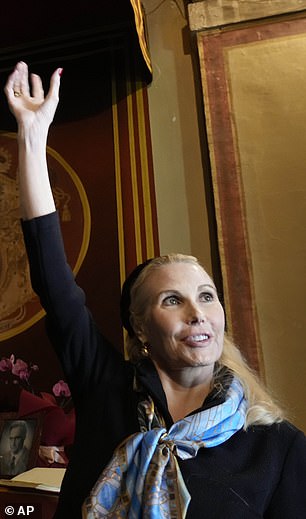 Prince Nicolò Boncompagni Ludovisi (far left) and Princess Rita (left and right) are pictured at the Villa Ludovisi. After the prince died in 2018, the villa became the subject of an inheritance dispute between his sons and Rita 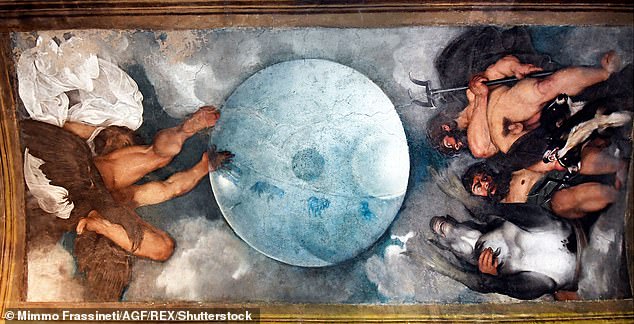 The property, which is set to be auctioned amid the dispute, is home to Jupiter, Neptune And Pluto (pictured) is the only ceiling painting by Caravaggio

With no winning bids in the first round, the villa will go up for auction two more times at lower prices, with the next round scheduled for April 7.

The Italian Culture Ministry can try to match the highest bid at any stage given the property’s value as a part of Italy’s cultural heritage.

The listing on the Rome tribunal’s auction site highlights its many attributes, though it notes that 11 million euros ($12.5 million) in renovations will be necessary to make it comply with current standards. 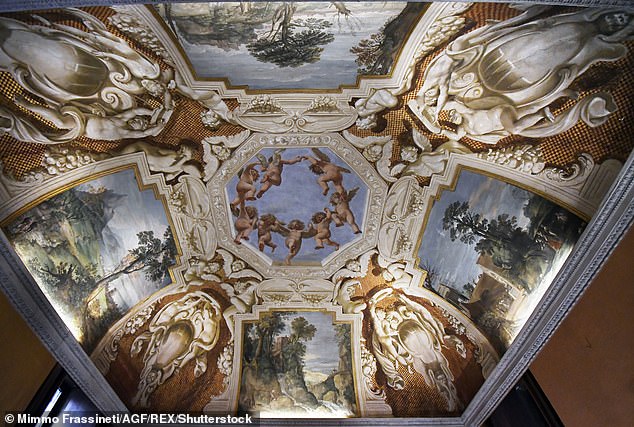 With no winning bids in the first auction, the villa will go up for auction two more times at lower prices. Pictured: Room of the countries, with the side panels painted by Guercino, Paul Bril, Domenichino and Gian Battista Viola 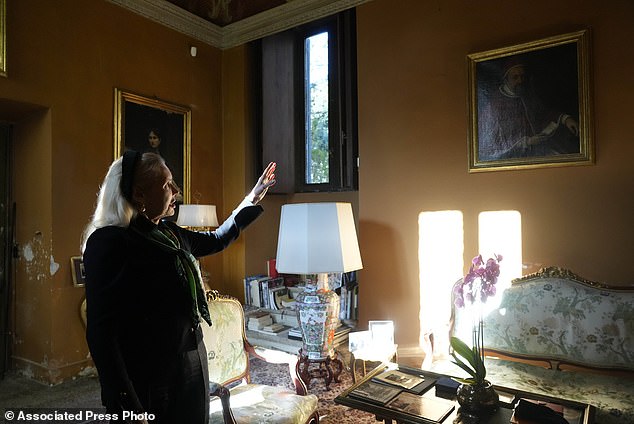 Princess Rita (pictured inside the home), who has lived in the property for two decades, said she has ‘rarely slept’ since she received the court-ordered auction notice on September 2 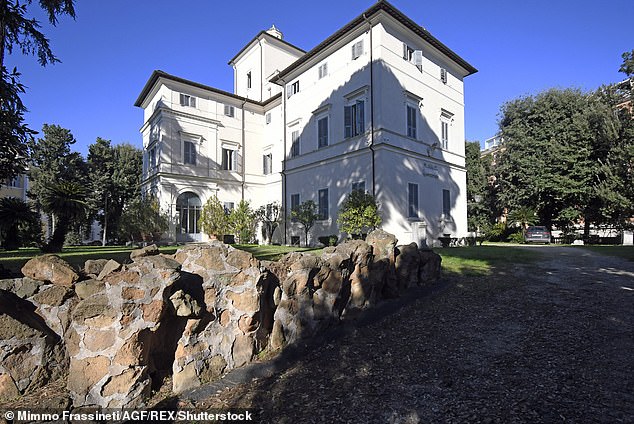 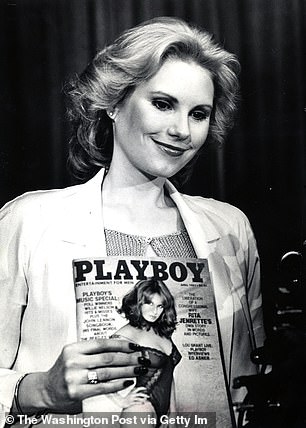 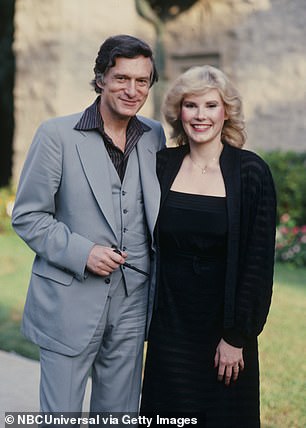 Rita (pictured left at the Playboy Mansion on April 13, 1981 and right with Hugh Hefner) decided to appear in Playboy magazine, posing topless with a feather boa in a photoshoot to accompany an article that she’d written, headlined The Liberation of a Congressional Wife. Another model is seen on the cover

A ‘monumental property’ on six levels, the listing says it is ‘among the most prestigious architectural and landscape beauties of pre-unification Rome,’ with three garages, the Caravaggio, two roof terraces and a ‘splendid garden with arboreal essences and tall trees, pedestrian paths, stairs and rest areas’.

Born plain Rita Carpenter, in Texas, she was educated at Harvard and spent much of the 1970s in Washington DC as the wife of John Jenrette, a Democratic congressman from South Carolina. Their marriage hit the buffers in 1980, when he was convicted of accepting a $50,000 bribe, in what became known as the ‘Abscam scandal’.

She subsequently decided to appear in Playboy magazine, posing topless with a feather boa in a photoshoot to accompany an article that she’d written, headlined The Liberation of a Congressional Wife. 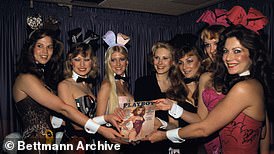 Princess Rita Boncompagni Ludovisi (center) decided to appear in Playboy magazine, posing in a feather boa in a photoshoot to accompany an article that she’d written, headlined The Liberation of a Congressional Wife

In it, she accused her former spouse of serious infidelity and claimed that once, during a break from an all-night session of Congress, she and Jenrette had ‘made love on the marble steps that overlook the monuments’ in front of the U.S. Capitol.

The revelation made global headlines, and an autobiography, My Capitol Secrets, came out later that year. It was billed as the true story of ‘the lady who blew the lid off Washington.’

Rita next moved to Los Angeles to capitalize on her notoriety by pursuing a Hollywood career.

She appeared on an episode of the TV drama Fantasy Island as a character called Nurse Heavenly, and in a film entitled Zombie Island Massacre.

Rita appeared in Playboy again in 1984, this time on the cover.

After the acting jobs dried up, she moved to New York to try her hand as a TV news reporter.

During the 1990s, she became an estate agent. Her biggest deal involved the 1998 sale of the General Motors Building to Donald Trump, who promptly installed his name in 4 ft-high gold letters above the front door.

Rita’s life changed once again in 2003, when she was telephoned out of the blue and asked to work as broker on a potential development deal involving Prince Nicolo.

‘They called me and said, ‘We have this prince who would like to develop a hotel on his property,’ she later told New Yorker magazine.

‘I said, ‘Oh, for heaven’s sakes! Everybody in New York calls themselves count or prince or whatever — they’re not.”

She agreed to go to Rome and soon realized her client was the real deal. The Prince fell in love at first sight.

‘It was probably written in the stars,’ he later recalled. ‘I said, in the clumsiest way one can even imagine, ‘Well, you are not ugly.’ She’s beautiful, of course, but she’s as beautiful inside. She’s candid like a child but shrewd like a fox!’

The couple, who married in 2009, spent more around $13m preserving the property, and each month would invite visitors on paid tours of the home and gardens, which would culminate in their being invited for tea.

But their 15-year relationship was the cause of friction with his sons that appears never to have been resolved.

‘When they were small, you would’ve eaten them up,’ the Prince once told an interviewer, regarding his three boys. ‘When they grew up, you sort of regret that you didn’t.’

Now, it is, of course, ending with the sale of the historic family seat.

‘I hope whoever buys this house loves it as much as I have,’ Princess Rita said last year.

The villa has become the subject of an inheritance dispute between Prince Nicolo Boncompagni Ludovisi’s children from his first marriage and his third wife, the San Antonio, Texas-born Princess Rita.

Speaking before the auction, ex-Playboy model Rita, who has lived in the home for two decades, said she has ‘rarely slept’ and has been ’emotional’ since she received the court-ordered auction notice on September 2.

She said: ‘It’s like going through the stages of death and dying. … You’re angry at first, and then you can’t believe it, and then you finally go into a point of accepting it.’

The prince’s three sons, Francesco, Ignazio, and Bante have spent years battling their stepmother Princess Rita over the fate of the property.

‘I had always wanted to turn it into a museum, actually, but that´s not going to happen I presume,’ Princess Rita said on Tuesday as she took visitors on a tour of the home.

‘So my hope is that whomever buys it will treat it with the care and love that my husband and I did.’

In October, she said her late husband had always resisted selling, despite offers from Bill Gates and an Arab sheikh, saying it was ‘devastating’ to think of the house ‘falling into the wrong hands’.

The battle concluded with a ruling that Villa Aurora should be sold at auction, with Princess Rite set to get half the proceeds.

Villa Aurora boasts the only surviving ceiling fresco by Michelangelo Merisi da Caravaggio, which is tucked away in a tiny room off a spiral staircase on the second floor.

It was commissioned in 1597 by the property’s then-owner, a diplomat and patron of the arts, who asked Caravaggio to decorate the ceiling of the small room, which was used as an alchemy workshop.

The stunning picture, measuring 10 feet across, shows the three Olympian gods with their characteristic elements: air and sulphur for Jupiter, water and mercury for Neptune, plus earth and salt for Pluto.

It is the only ceiling mural that Caravaggio is known to have made and is believed to be the first known piece of the painter’s work.

Claudio Strinati, an art historian and Caravaggio expert, said: ‘It’s probably the first work of Caravaggio’s that we know of, so historically, it’s a really a milestone.

‘And then in and of itself, it’s a beautiful piece about a mythological theme, which is rare in Caravaggio’s art because he mostly dealt with sacred themes.’

‘So it’s a painting of real artistic and historic importance, and of great beauty.’

The stunning property also contains a statue of Pan attributed to Michelangelo on its gravel drive.

The American Princess Rita, who was previously married to former US Rep. John Jenrette Jr. of South Carolina, married Boncompagni Ludovisi in 2009.

At the time, the villa had fallen into disrepair, and her husband only used it as an office.

Together, they tried to renovate it as best they could, before opening it up to visiting students and tour groups.

They also hosted dinners to bring in revenue and, thanks to funding from Rutgers University, helped arrange for the digitization of the Boncompagni Ludovisi archives.

With no immediate buyer stepping forward, Princess Rita said she has more time in the villa but assumes she will eventually have to move out.

She said she has looked at properties to rent or buy nearby, but she admitted that if she stays in Rome, ‘I keep thinking, won’t it be painful to drive by here and see someone else living here?’.

She said she hopes to meet the new owners, give them a tour and teach them some of its history in hopes that they’ll keep the home open for the public to enjoy.

But she admitted she knows that once it is sold, she’ll have no say over whether it becomes a 5-star hotel, an embassy or something else entirely.

‘Even when all the pipes would burst.’

These Are Burberry’s Most Iconic Pieces
World News