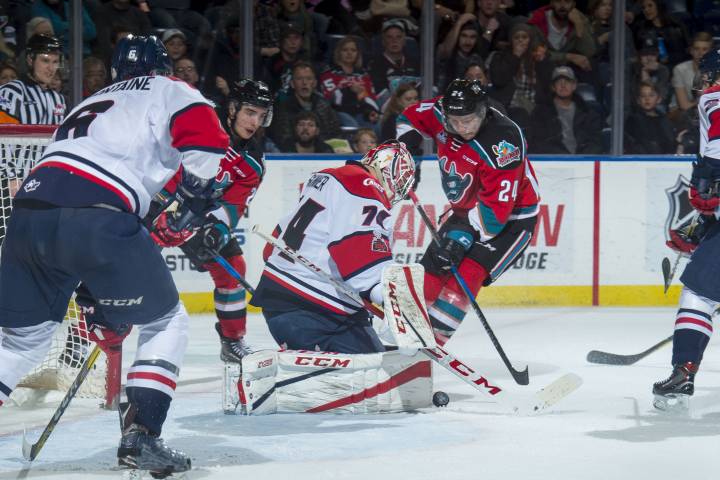 Rockets’ offence blown away by Hurricane of goals

The Kelowna Rockets had a bumpy landing in Lethbridge on Wednesday night.

Kelowna trekked to southern Alberta for game two of their four-game Central Division road swing, but the Rockets’ reception was a bit of a rough one.

Roman Basran got the start against the Hurricanes, but he wouldn’t get the finish.

Lethbridge got the ball rolling off a Kyle Crosbie miscue, Zachary Cox the recipient of a gift-wrapped give away in the slot.

He beat Basran just 2:16 into the game for an early 1-0 Lethbridge lead. From there, the ’Canes never looked back.

Jake Leschyshyn added a shorthanded marker at 14:05 to make it 2-0.

In the second, Rockets net minder Roman Basran got caught without his stick and Jake Elmer fired home a rebound to put Lethbridge up by three at 8:58.

Kelowna’s lone goal on the night was an absolute beauty, power-play marker from Liam Kindree at 13:39 that broke the ’Canes shutout bid. The goal, though, was too little, too late, as Lethbridge downed Kelowna 5-1.

Kelowna, which bested Lethbridge to win the 2020 Memorial Cup hosting rights, was outshot 37-27. The Rockets were 1-for-7 on the power play while the Hurricanes were 0-for-3.

Up next for Kelowna is a Friday night tilt in Calgary against the Hitmen, then a Saturday evening contest against the Medicine Hat Tigers.