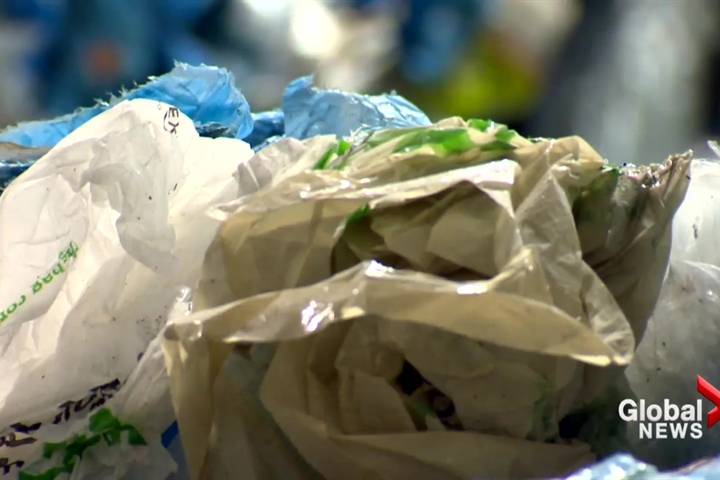 Retail reps disappointed with ‘lack of provincial leadership’ in N.B. on single-use plastics

The Atlantic director of the Retail Council of Canada says a plastic bag bylaw or resolution should be provincially enforced in New Brunswick.

“The worst-case scenario for us would be to see neighbouring municipal communities taking action that’s not harmonized,” said Jim Cormier.

But because of a “lack of provincial leadership on this file,” Cormier says this has been the case. He credits the communities of Moncton, Riverview and Dieppe with working together, noting they’re the first municipal units in the province to collaborate on the issue.

“Our No. 1 choice would be if government — provincial government, in this case — set guidelines and said: ‘We would like for retailers to maybe sign a memorandum of understanding to say that by such-and-such a date, we will reduce our plastic bag consumption by a certain percentage,’” he explained.

The Visions United Church, which presented a petition calling for a ban on single-use plastics in May, says plastic use is a bigger environmental issue.

“We’re not going to get rid of all plastics… that’s naive,” says Rev. Shawn Redden. “But there are ways that we can be more responsible in our use of plastics.”

Redden says the church group also asked members of its congregation to participate in a challenge last year by not using single-use plastics, disposable plastic water bottles or disposable K-Cups for coffee and tea.

In Moncton, Riverview and Dieppe, municipal governments conducted a survey about single-use plastic along with Southeast Eco360. Municipal representatives and Southeast Eco360 are now discussing the survey results, but no decision will be made until the spring.

“Educating the public and building public awareness around the issue is certainly going to be a very big part of the program,” says Gena Alderson, waste diversion co-ordinator with Southeast Eco360.

A statement from the province’s Department of Environment and Local Government says the Retail Council of Canada will be meeting with Minister Jeff Carr in the coming weeks, at which point the issue will be discussed.

Chris Rock Does Not Want to Host the Oscars

Courteney Cox Opens Up About Relationship With Johnny McDaid: ‘He’s My Guy, He’s My One’
World News