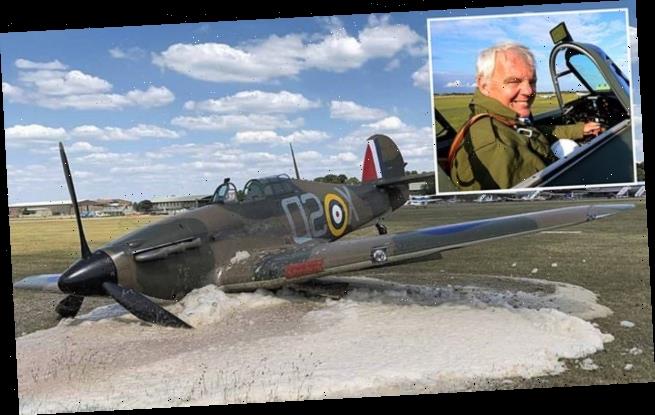 A Hurricane fighter which was shot down in the Battle of Britain crash landed 80 years later after it was restored for £2million.

The fighter had been in service for just four days when it was blasted out of the sky over Kent by a Messerschmitt Bf109 in 1940.

It flew again in August 2018 for the first time in 78 years after being rebuilt with new parts and pieces of the wreckage by neurosurgeon Peter Kirkpatrick.

The World War Two fighter had clocked up 34 hours of flying time before it crashed when its undercarriage collapsed as it landed at Duxford Airfield, Cambridgeshire, on June 1 this year. 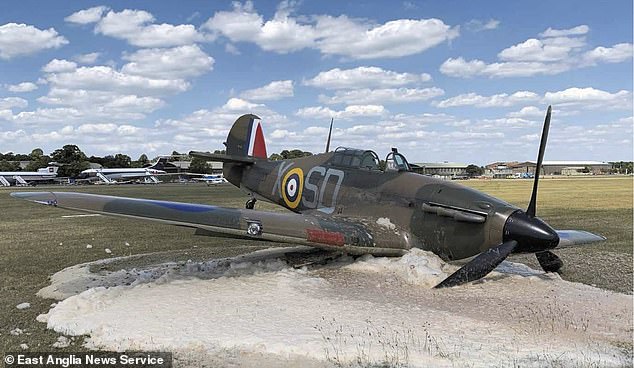 A Hurricane fighter which was shot down in the Battle of Britain crash landed at at Duxford Airfield, Cambridgeshire, 80 years later after it was restored for £2million 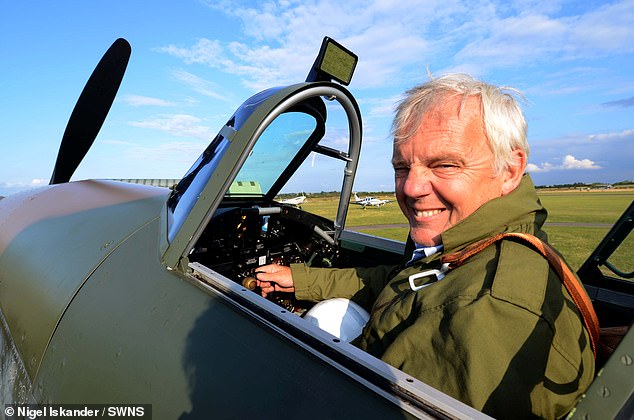 A report by the Air Accidents Investigation Branch partly blamed the accident on the unidentified pilot for failing to properly control the aircraft.

It also found that an 11mph crosswind had helped cause the 350mph aircraft to ‘bounce’ and veer to the right on the hard grass runway, putting pressure on the undercarriage.

The 60-year-old pilot walked away unhurt from the stricken plane before it was sprayed with foam by the airfield’s firefighters to prevent a blaze.

The report said the Hurricane may have been coming in to land ‘slightly fast’, meaning it was ‘probably quite light on its wheels’, increasing its tendency to bounce and slide. 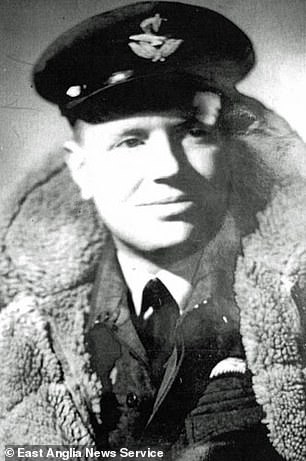 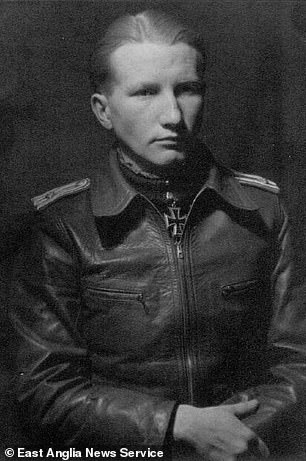 Pilot Officer Everett Bryan Rogers (left) was flying the fighter when it was shot down by German Gustav ‘Micky’ Sprick on September 28, 1940 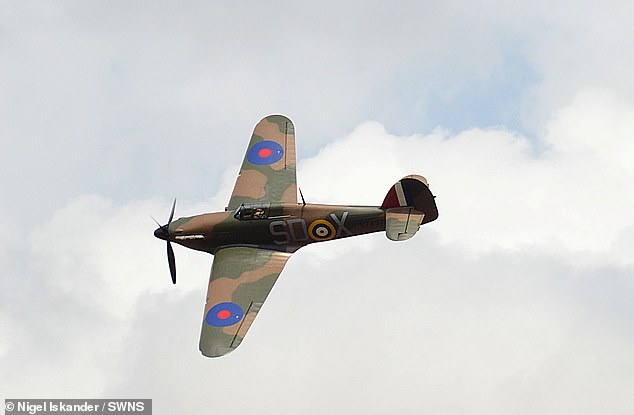 It added: ‘Subsequent braking and the propeller’s gyroscopic reaction to right yaw would have tended to raise the tail, and there was no obvious tail-down elevator applied to oppose it.

‘When the aircraft bounced while turning to the right the tail lifted and it is likely most of the aircraft’s weight was supported on the left mainwheel.

‘The swing to the right became more pronounced and the aircraft began to slide in the landing direction. This exceeded the side loads for which the landing gear was designed, and it collapsed.

They fought the most important battle this country has ever faced and their victory saved Britain from the tyranny of Nazi Germany.

The heroes of the Battle of Britain repelled Hitler’s Luftwaffe in the summer months of 1940 but now only one of ‘The Few’ is still alive.

At the time, they were in their late teens or early 20s when they took to the skies in Spitfires and Hurricanes between July and October 1940. 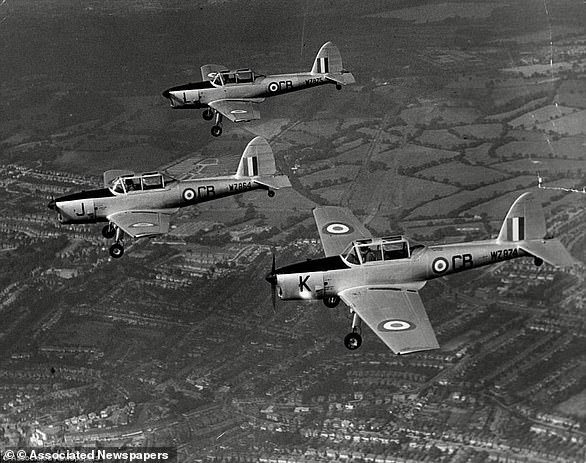 Others flew in Blenheims, Beaufighters and Defiants, becoming the ‘aces’ of the Battle, shooting down plane after plane.

Hundreds of RAF pilots were killed in dog fights over the English Channel, the control of which proved a critical turning point in the war.

During the Battle, Sir Winston Churchill said: ‘The gratitude of every home in our island, in our empire, and indeed throughout the world, goes out to the British airmen who, undaunted by odds, unwearied in their constant challenge and mortal danger, are turning the tide of the world war by their prowess and by their devotion.

‘Never in the field of human conflict was so much owed by so many to so few.’

When it was over, 544 RAF pilots and aircrew were dead and had made the ultimate sacrifice to keep generations of Britons safe.

‘In the absence of any reported defects, such as a binding right brake, it is likely that the loss of control was a result of insufficient or inappropriate control inputs.’

The report concluded: ‘The crosswind on landing induced a turn to the right.

‘The reported application of brake and an absence of tail-down elevator coincided with the aircraft bouncing and pitching forward on the hard, undulating runway surface, aggravating the effects of the swing.

‘In the absence of effective control inputs to oppose the swing, the aircraft began to slide sideways, eventually causing the landing gear to collapse.’

The pilot agreed to undergo refresher training and the plane’s operators introduced new rules banning pilots with limited experience from landing it in crosswinds from the right greater than five knots.

The Hurricane with the serial number V7497 was part of 501 Squadron flying from RAF Kenley, Surrey, during the Battle of Britain.

Pilot Officer Everett Bryan Rogers was flying the fighter when it was shot down on September 28, 1940.

He managed to bail out of the cockpit and parachuted to earth as the bullet-riddled plane crashed in flames in a bog in East Sutton, Kent.

PO Rogers flew Halifax bombers later in the war, earning himself the Distinguished Flying Cross for regaining control of his plane when it was blown upside down by anti-aircraft fire during a bombing raid in 1945. He died in 1960.

The Hurricane was shot down on only its seventh operational sortie by German fighter Gustav ‘Micky’ Sprick and became his 20th kill for which he was awarded the Ritterkreuz medal.

The Luftwaffe pilot later died during a dogfight with RAF Spitfires over northern France on June 22, 1941.

He was said to have been carrying out a difficult split-S manoeuvre to evade the gunsights of a British plane, but it put immense pressure on the air-frame of his Messerschmitt, causing a wing to tear off and sending him plummeting to his death.

By the time he died at the age of 23, he had made 24 kills, including 11 victories during the Battle of Britain.

The fighter’s decaying wreckage was discovered and excavated from the bog by metal detectorists in the early 1990s.

Several key components including its identity plate were sold to NHS consultant Peter Kirkpatrick who stumped up £2million together with three other stakeholders to restore it.

The restoration was carried out by Hawker Restorations based at Elmsett, Suffolk, which retained ownership of 25 per cent of the plane

The company has worked on or built all of the 14 Hurricanes which are still flying. 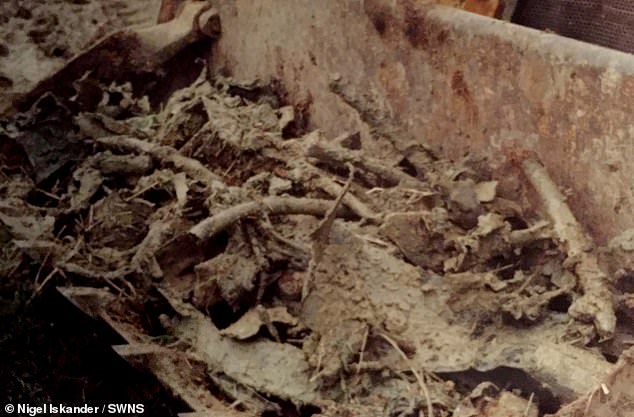 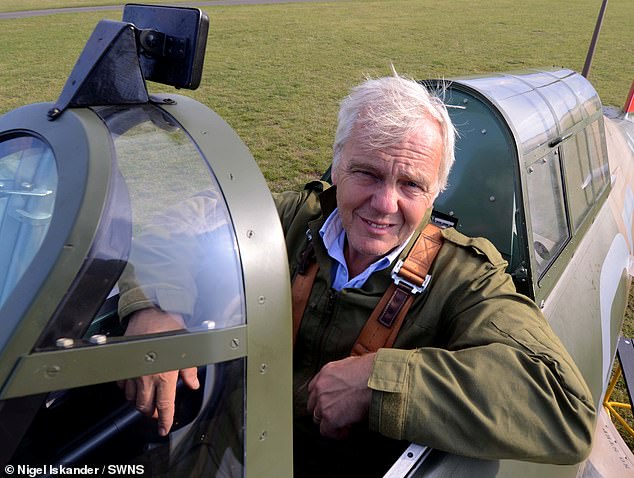 Mr Kirkpatrick (pictured), a qualified pilot and a neurosurgeon at Addenbrooke’s Hospital, Cambridge, revealed in January this year that he hoped to fly the Hurricane at air shows

Andrew Wenham of Hawker Restorations told the Telegraph: ‘I was very grateful no one was hurt.

‘It’s obviously heartbreaking for it to happen, we’ve just restored it and released it, we want it to be in the sky doing its thing.’

Mr Kirkpatrick, a qualified pilot and a neurosurgeon at Addenbrooke’s Hospital, Cambridge, revealed in January this year that he hoped to fly the Hurricane at air shows.

He had to remortgage his house to pay his share of the restoration costs.