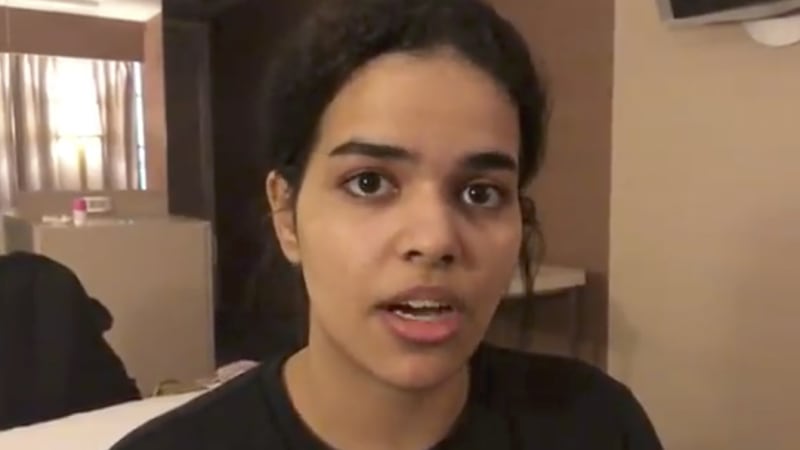 Bangkok: An 18-year-old Saudi woman who fled her family over alleged abuse and barricaded herself in a Bangkok airport hotel room in a desperate bid for asylum will be allowed to stay in Thailand while her case is evaluated by the UN refugee agency. 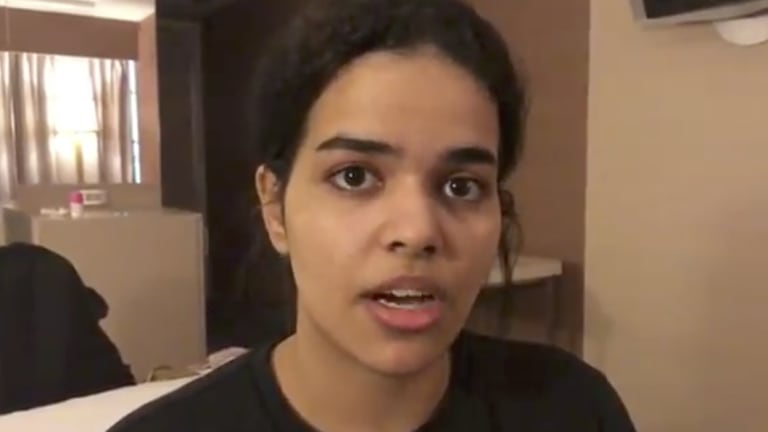 Rahaf Mohammed al-Qunun says she is fleeing abuse by her family and wants asylum in Australia. Credit:AP

Rahaf Mohammed al-Qunun grabbed global attention when she sent out pleas for help via social media, saying she feared for her life if she were put on a plane back to Kuwait, where she had slipped away from her family, or her homeland.

Instead, she has been allowed to enter Thailand temporarily under the protection of the UN refugee agency, which was expected to take about five to seven days to study her case and her claim for asylum. She said she wants to go to Australia to seek refuge there.

"We will not send anyone to die. We will not do that. We will adhere to human rights under the rule of law," said Thai Immigration Police chief Major General Surachate Hakparn.

al-Qunun's plight mirrors that of other Saudi women who in recent years have turned to social media to amplify their calls for help while trying to flee abusive families and other obstacles they face in the conservative kingdom. 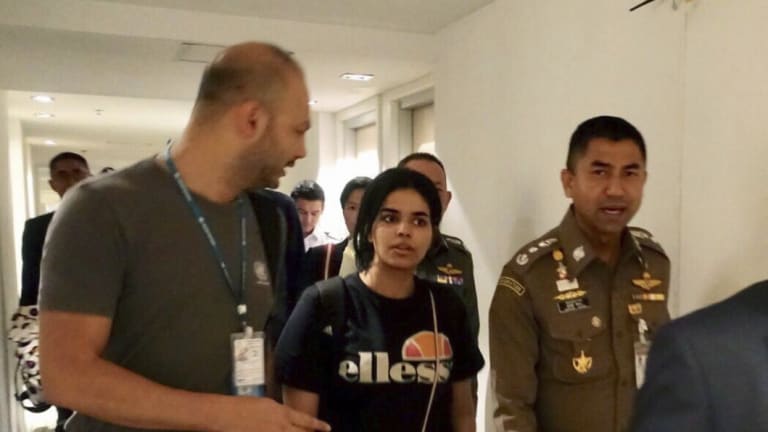 Photos released Monday night by immigration police showed al-Qunun with Thai and UN officials after she left the airport transit hotel room where she had been holed up over the weekend, sending her pleas for help on her Twitter account.

She later tweeted that she feels safe under UN protection and has gotten back her passport, which had been taken from her earlier.

al-Qunun's ordeal began when she fled from her family while in Kuwait and boarded a flight to Thailand, apparently taking advantage of being away from Saudi Arabia's restrictions on women who cannot travel abroad without a man's consent.

Upon arriving at Bangkok's Suvarnabhumi Airport on Saturday night, she said she was met by a man whom she identified at various times as either a Kuwait Airways employee or a Saudi diplomat, who took her passport and said he would help her gain entry to Thailand.

Saudi Arabia denies its officials were involved in any way.

When the man returned about an hour later with four or five other people, they said they knew she had run away, that her family wanted her back, and she should go home to Saudi Arabia. She was sent to a hotel room, and told she would be put on a Monday morning flight to Kuwait.

She then went online, sending out pleas for assistance over Twitter, and also barricaded her hotel room door.

Global attention was sparked by social media and she did not get on the scheduled morning flight to Kuwait.

al-Qunun wrote of being in "real danger" if forced to return to her family in Saudi Arabia, and said in media interviews that she might be killed.

She told the BBC that she had renounced Islam and was fearful of her father's retaliation.

Her Twitter account attracted more than 66,000 followers in less than 48 hours and her story grabbed the attention of foreign governments and the UN refugee agency. As the pressure grew, with concern expressed by Australian lawmakers, Germany's ambassador to Thailand and human rights agencies, Thai officials agreed to allow U.N refugee officials to meet with her.

The office of the UN High Commissioner for Refugees said it expected to take at least 5-7 days to evaluate her case and claims, according to Surachate, the Thai immigration police chief.

Giuseppe De Vincentiis, the UNHCR representative in Thailand, told journalists he did not know where al-Qunun would be staying but that she would be safe because she was under his agency's protection.

UNHCR declined to release any details of its meeting with her, but De Vincentiis noted "a good spirit of collaboration so far" with Thai officials.

Surachate said al-Qunun's father was due to arrive Monday night, and officials would see if she was willing to meet with him.

"As of now, she does not wish to go back and we will not force her. She won't be sent anywhere tonight," Surachate said at a news conference.

"She fled hardship. Thailand is a land of smiles," he said.

He noted her tweets mentioned "she does not want Islam," adding that "this type of thing, in her country, is a hard crime."

Surachate challenged parts of al-Qunun's story, including that she had an Australian visa.

"The fact is she didn't have any money. She intended to come here and didn't have any visa to go to Australia. So we have to state the facts here. But we will provide assistance nonetheless," he said.

He later said Kuwait Airways had been at fault for allowing her to board her flight to Thailand without having proper travel documents. The airline did not immediately comment.

Earlier, Surachate had said that the Saudi Embassy had said she had run away from her parents and said she could be in danger. The embassy did not mention that she had rejected Islam.

Her case highlighted Saudi Arabia's male guardianship laws, which require women who want to travel, obtain a passport or marry to have the consent of a male relative – usually a father or husband – no matter what their age.

It also underscored the limits of the reforms being pushed by Saudi Arabia's powerful Crown Prince Mohamed bin Salman as he struggles to repair damage to his reputation after the grisly killing three months ago of Saudi writer Jamal Khashoggi by Saudi agents in Istanbul.

For runaway Saudi women, fleeing can be a matter of life and death, and they are almost always trying to escape male relatives.

In 2017, Dina Ali Lasloom triggered a firestorm online when she was stopped en route to Australia, where she planned to seek asylum.

She was forced to return to Saudi Arabia and was not publicly heard from again, according to activists tracking her whereabouts.

Despite efforts by the Saudi government to curtail the scope of male guardianship laws, women who try to flee their families in Saudi Arabia have few good options inside the kingdom.

They often are pressured to reconcile with their families, sent to shelters where their movement is restricted or face arrest for disobeying their legal guardian.

While the Saudi Embassy in Thailand denies Saudi authorities were involved in trying to stop al-Qunun from going to Australia, the kingdom has in the past forced its citizens to return home.

Saudi Arabia's charge d'affaires in Bangkok, Abdullah al-Shuaibi, was quoted in Saudi media as saying that al-Qunun was stopped by Thai authorities because she did not appear to have a return ticket, a hotel reservation or itinerary to show she was a tourist.

He said the Saudi Embassy has no authority to stop anyone at the airport and that such a decision would rest with Thai officials.

"She was stopped by airport authorities because she violated Thai laws," he was quoted as saying in Sabq, a state-aligned Saudi news website. "The embassy is only monitoring the situation."

Why did Douglas Carswell quit Ukip and what has he done since leaving Parliament?