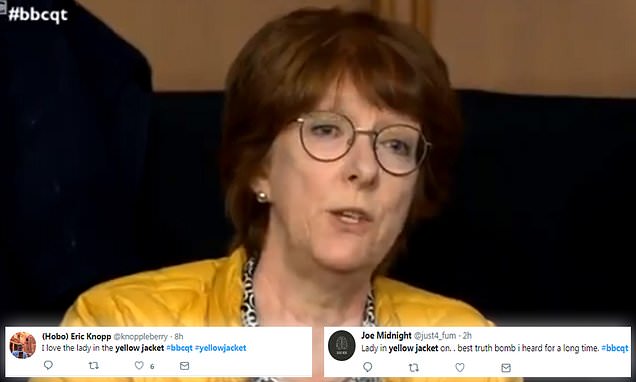 ‘Bet the Woman in the Yellow Jacket would negotiate a deal’: Question Time viewers go wild for audience member who tells panel ‘could we get over feeling sorry for Theresa May?’

A Question Time audience member has been widely praised for telling the BBC political show’s panel: ‘Could we get over feeling sorry for Theresa May?’

The woman, who was pointed out by new host Fiona Bruce as ‘The Woman in the Yellow Jacket’, criticised the Prime Minister in a forceful 80-second speech.

It received rapturous applause last night and viewers praised her for her ‘eloquent and succinct’ words – and the ‘best ever comments by an audience member’. 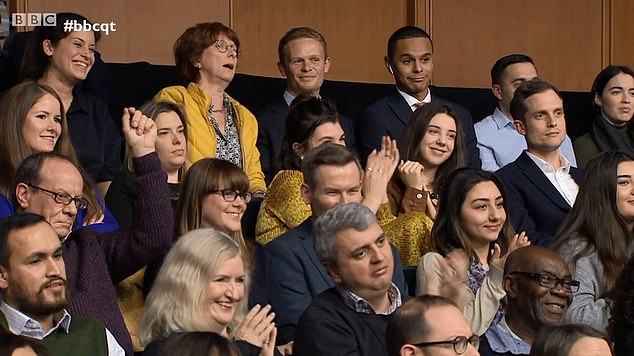 The woman, who was at the back of the audience yesterday in Islington, North London, began: ‘Two things. Firstly, could we get over feeling sorry for Theresa May?

Bruce, who has taken over from David Dimbleby to host the programme, then interrupted her, saying: ‘Hang on, hang on – do you never feel sorry for her?’

And the woman replied: ‘No, I don’t feel sorry for her. She is the woman who for many, many years has led the hostile environment for migrants in this country – which resulted in the Windrush generation, it’s a disgrace.

‘She’s the person who created her very specific red lines on immigration in the ECJ which have created the negotiation mess that we’re in. She triggered Article 50 when she had no plan. 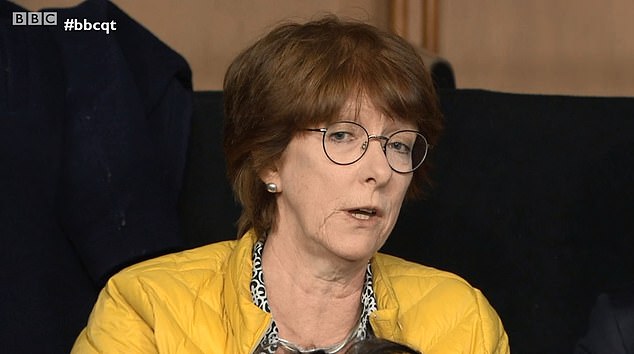 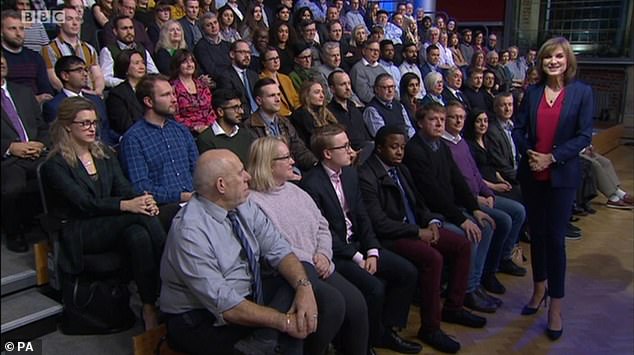 ‘And as to criticising the EU on this, there are 27 other countries in the EU. They have been completely united on this. We do not even have a cabinet who can unite, and definitely a government that isn’t in control of the process.

‘They are a body of rules and regulations and they are not going to break that when it’s the most successful single market in the world, and all round the world people want to do deals with the EU.

‘We are going to lose all of that, and it is ridiculous for us with our hopeless government who cannot get it together, to actually work out what the will of the people is today in 2019 to blame the EU and to go around feeling sorry for Theresa May. I’m sorry.’

The woman’s speech was tweeted by the official Question Time account, and had received 12,000 likes along with more than 4,000 retweets by 8.30am today. 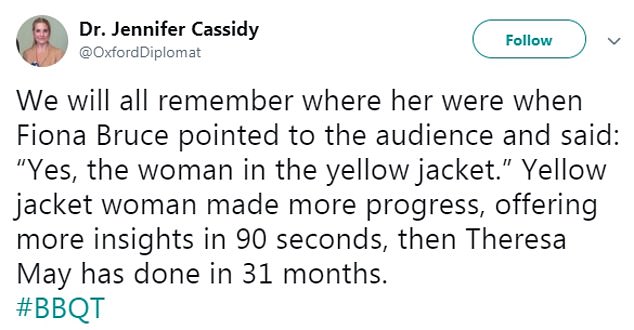 Among those praising it was University of Oxford politics lecturer Jennifer Cassidy, who tweeted: ‘We will all remember where her were when Fiona Bruce pointed to the audience and said: ‘Yes, the woman in the yellow jacket.’

‘Yellow jacket woman made more progress, offering more insights in 90 seconds, then Theresa May has done in 31 months.’

Clare Wigley said: ‘This lady said eloquently and succinctly what many of us are feeling. The audience tonight very well represent the views of the people (in my opinion).’

And Linzi Poll, of Holmfirth, West Yorkshire, added: ‘Best ever comments by an audience member. Well done that woman. Give her a job in government.’ 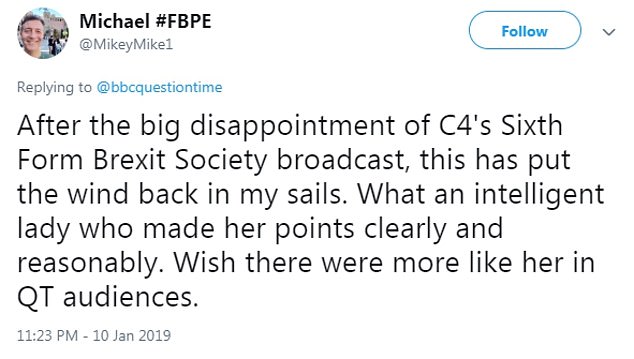 But Twitter user Slackaly retorted: ‘The funny thing is they don’t know what it is like to actually have to work at something for a whole nation as most of their life they have just worked for themselves.

‘Anyone who stands up and does a job like Theresa May is much, much more decent than those who moan.’

Bruce was praised for her deft and assertive handling of panellists on the new-look Question Time yesterday.

The experienced newsreader appeared to take little time to settle into the frequently fiery debate show. 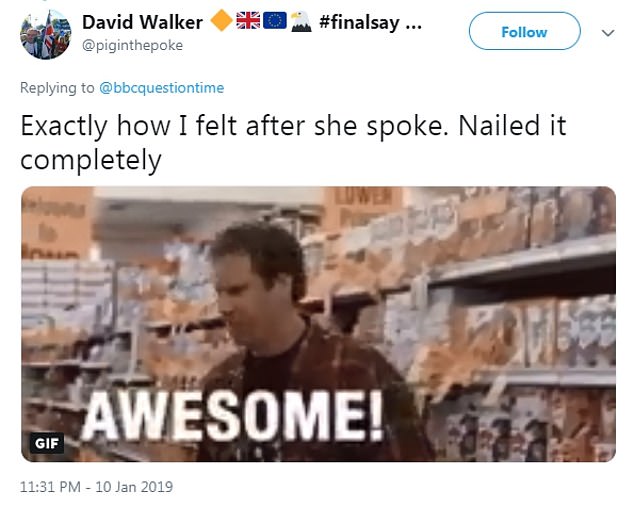 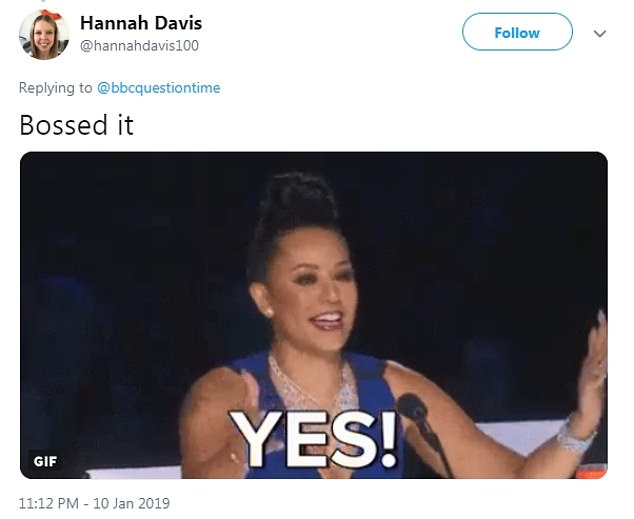 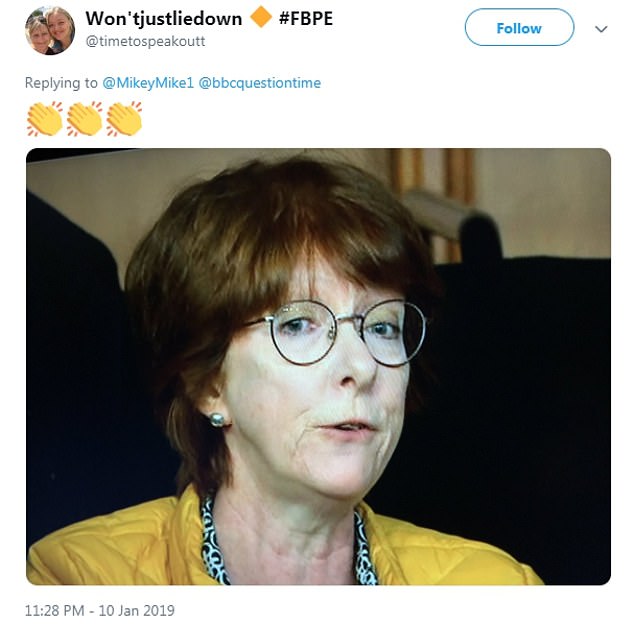 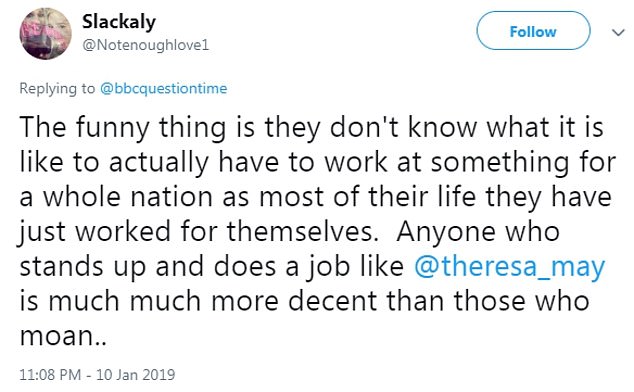 Brexit was the first and primary topic of discussion and interruption on the first Question Time since the Christmas break, and Bruce was praised for pressing guests on the Brexit deal, Conservative leave strategy, and alleged Labour electioneering over the EU.

Bruce took over from Dimbleby who had presented the often-heated debate show for 25 years.

The show had received some criticism for recitations of various party lines, and sometimes angry clashes.

The new-look show was filmed in the Jeremy Corbyn heartland of Islington, and featured voices from both sides of the divisive Brexit debate.

Prototype Of Trump’s Wall Was Breached With A Saw, ‘NBC News’ Reports