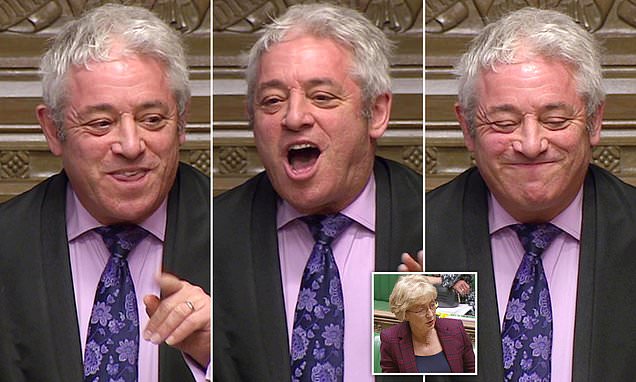 The little goblin’s middle stump cartwheeled to the boundary: QUENTIN LETTS watches as John Bercow is dragged into sexism row

Lie down with a gumboiled, septic varlet and you will eventually catch his lice.

Speaker Bercow’s patron Jeremy Corbyn learned that to his cost yesterday after muttering some insult about Theresa May during PMQs.

Did he call her ‘stupid woman’? Sure looked so, though he denied it. Soon Mr Corbyn was the one who looked stupid as the parliamentary day unravelled into uproar about his alleged sexism. 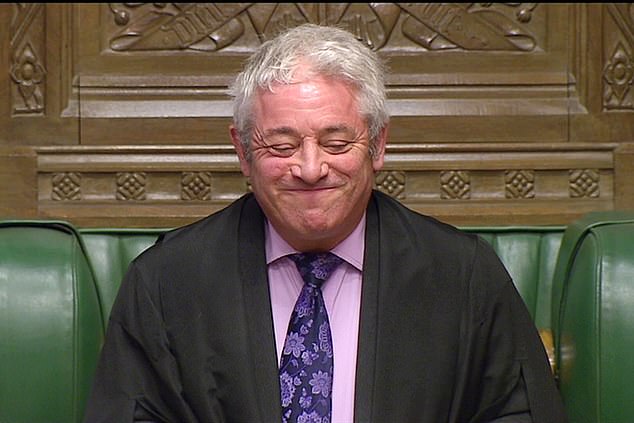 But the controversy would not have been nearly so acidic and serious had Speaker Bercow not been in the sights. MPs remembered that he himself had form with the phrase ‘stupid woman’, having once thrown it at Andrea Leadsom.

The Corbyn atrocity, if atrocity it be, occurred at 12.19 and 50 seconds. It was mumbled in a moment of frustration after Mrs May did a corny Christmas routine which ended with her telling Mr Corbyn to look at his own, unhappy benches – ‘behind you!’ she said, panto-style. Much merriment.

Mr Corbyn, whose sense of humour is little better than Madam Glumbucket’s, hated being mocked. He let slip a twitch of peevishness. Parliamentary cameras caught him mouthing words which certainly resembled ‘stupid’ and ‘woman’.

Eeek! You can’t call a woman a ‘woman’ in these egalitarian times! Doesn’t lifelong equalities-grievance agitator Corbyn know anything? 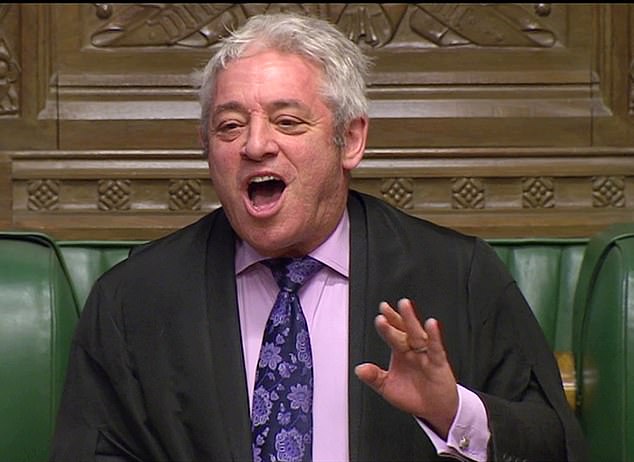 Andrea Leadsom asked today why when John Bercow called her a stupid woman, he did not apologise in the commons 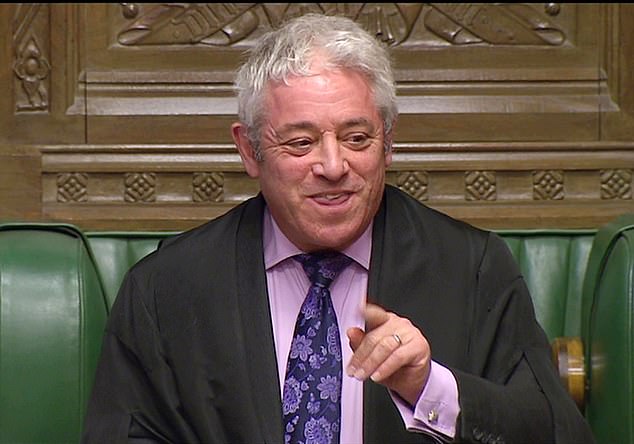 Mr Bercow was initially reluctant to become involved but after much gaseous humming he did agree that if courtesy had been breached, a ‘sorry’ might be suitable

The internet quickly had footage of Mr Corbyn making his remark. Labour frontbenchers, glued to their mobile telephones, copped wind of the unfolding social media hoo-hah.

On the Labour front bench, Mr Corbyn went into a huddle with Labour chief whip Nick Brown and Dawn Butler (another expert in hurling abuse).

On and on went PMQs. Had Bercow let it end on time at 12.30, the row might not have exploded. Yet the little goblin feels this weird compunction to cross every shortlisted name off his Order Paper, and so the session ran to 12.50. By then a Tory backbencher had alluded to the row and the hare was up.

Mr Corbyn started to sidle out. He could have been a shoplifter edging towards the exit. Tory MPs erupted in an angry wall of noise.

Sir Patrick McLoughlin (Con, Derbyshire Dales) tried to make a point of order but was ignored. More cacophany, a din to rouse Hypnos. The Speaker finally let Sir Patrick make his point – namely, that Mr Corbyn should return and apologise.

Mr Bercow was initially reluctant to become involved. He relies on Corbyn to keep him in his ignoble chair. After much gaseous humming he did agree that if courtesy had been breached, a ‘sorry’ might be suitable.

With that he insisted there could be no further points of order. Oh yes there could. Mrs Leadsom approached the despatch box with deadly intent.

She proceeded to make an intervention that could have electrified Morecambe promenade: If Bercow thought an apology might be in order, why had he not apologised for calling her a ‘stupid woman’?

The chamber gasped. Blinked. Recoiled. Then cheered. Cheered and cheered and cheered – on all sides, I swear. A member of the public behind me just laughed. The Squeaker’s middle stump went cartwheeling toward the boundary.

He tried saying ‘no, no, no’, gulping for air like a beached perch. With that ghastly fake smile he said the matter had been dealt with moons ago. 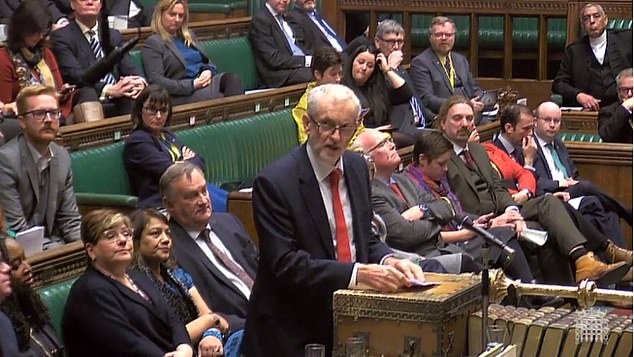 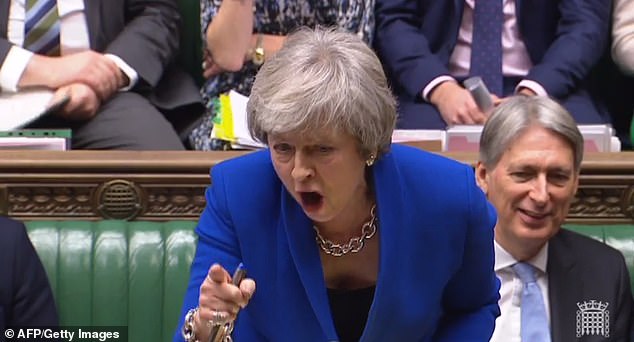 Mrs May had said Mr Corbyn’s position as descending into ‘pantomime’, and said his own party was not behind him

Mrs Leadsom had not complained to him in private meetings since. ‘The matter has been treated of,’ he blustered, ‘And I am leaving it there.’

Heads swivelled to Mrs Leadsom. She was smouldering. Steely. Basically, she had just stabbed this hated Speaker in his jugular. Automatic respect from scores of MPs. Leadsom for leader?

Beside her, still, sat Mrs May, also haloed by victimhood. The dignity of those two women beside the wriggling, grubby Bercow, and the absent, foolish Corbyn was striking.

Bercow was trying to shut down the rebellion. No chance. Anna Soubry (Con, Broxtowe), needing to score runs for the blues after her anti-Brexit conniptions, said Bercow would have reacted differently had ‘stupid woman’ been aimed by a Tory man at a Labour MP.

More prolonged hear-hears. Bercow was flailing. His authority was collapsing before our eyes. His microphone stopped working, forcing him to shout. His voice cracked.

He was scarlet in the face. Health Secretary Matt Hancock, nearby, gesticulated in the way professional footballers do when they are asking for a penalty.

Mr Corbyn later returned to the Chamber after video evidence had been inspected. He claimed he had said ‘stupid people’. Ha! Mrs Leadsom, again ruthless, imperious, said the country would reach its own conclusions.

There was further unpleasantness between Bercow and another Tory woman, Chelmsford’s sparky Vicky Ford. She too had been called a stupid woman by Bercow, she said. He denied this. She was left shaking with rage.

Peace broke out only when, er, the House returned to debating Brexit.