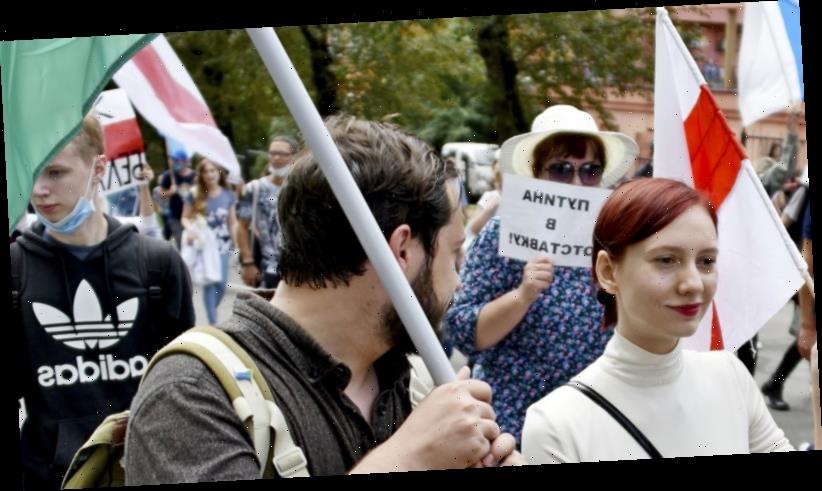 Almaty: Thousands of people took to the streets on Saturday in Russia's far eastern city of Khabarovsk to protest against President Vladimir Putin's handling of a regional political crisis and the suspected poisoning of his most vocal critic.

"Putin, have some tea," protesters chanted as they marched on the city's main thoroughfare, in a reference to the case of opposition politician Alexei Navalny who fell gravely ill this month after drinking a cup of tea at an airport cafe. 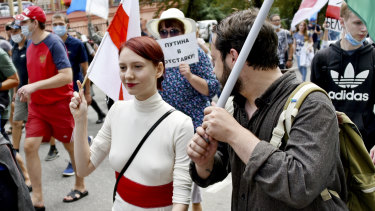 A woman wearing white and red, colors of the old Belarusian flag, holds the flag during an unsanctioned protest in support of Sergei Furgal, the governor of the Khabarovsk region, in Khabarovsk, 6100 kilometres east of Moscow, Russia.Credit:AP

Navalny, 44, was airlifted to Germany last week after collapsing during a flight to Moscow from the Siberian city of Tomsk. He is now in a medically-induced coma in a Berlin hospital.

Residents of Khabarovsk, about 6110 km (3800 miles) east of Moscow, started holding weekly rallies after the July 9 detention of Sergei Furgal, the region's popular governor, over murder charges he denies.

His supporters say the detention is politically motivated. At the rally, they brandished posters denouncing "repression" and "dictatorship" and demanded that Furgal be released and allowed to return to the city.

Some also expressed solidarity with opponents of Belarusian leader and long-time Putin ally Alexander Lukashenko who have been staging public protests for weeks over vote-rigging accusations in the August 9 presidential election. 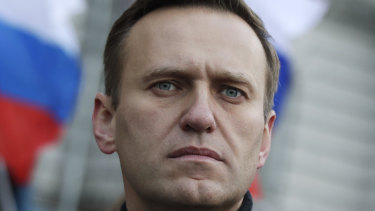 In Berlin, German doctors treating Navalny say the dissident is still in an induced coma but his condition is stable and his symptoms are improving.

Navalny, a corruption investigator who is one of Putin’s fiercest critics, fell ill on a flight back to Moscow from Siberia about a week ago and was taken to a hospital in the Siberian city of Omsk after the plane made an emergency landing.

He is being treated with the antidote atropine. Charité said Friday that “there has been some improvement in the symptoms caused by the inhibition of cholinesterase activity.”

“While his condition remains serious, there is no immediate danger to his life,” the hospital said.

“However, due to the severity of the patient’s poisoning, it remains too early to gauge potential long-term effects.”

Racing Gossip: Trackman is back with the latest paddock talk as he lines up some bets at Goodwood on Saturday