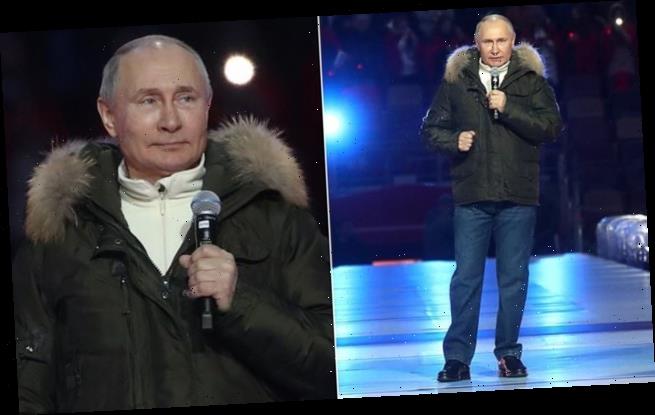 Russian President Vladimir Putin has appeared on stage during a concert marking the seventh anniversary of Crimea annexation, despite strong condemnation of the ‘occupation’ by the Group of Seven.

The foreign ministers of Britain, Canada, France, Germany, Italy, Japan and the U.S. today issued a strong condemnation of what it called Russia’s ongoing ‘occupation’ of the Crimean Peninsula, seven years after Moscow annexed it from Ukraine.

Tens of thousands of people gathered at Luzhniki Stadium in Moscow today to watch a patriotic concert called ‘The days of Crimea’.

The Group of Seven said in a joint statement that Russia’s actions continue to ‘undermine Ukraine’s sovereignty, territorial integrity and independence.’ 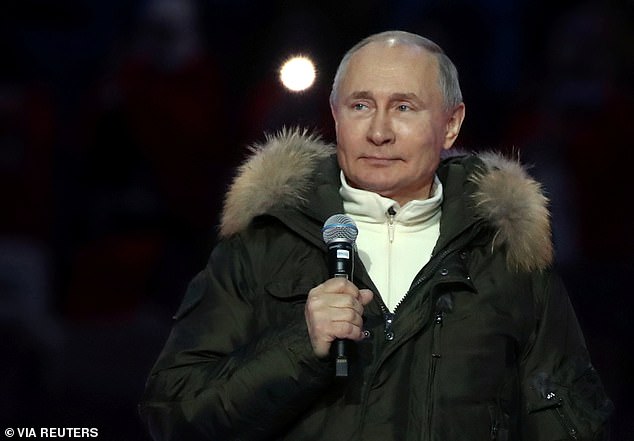 ‘We unequivocally denounce Russia’s temporary occupation of the Autonomous Republic of Crimea and the City of Sevastopol,’ the seven countries said. ‘Russia’s attempts to legitimize it are not, and will not, be recognized.’

They accused Russia of human rights abuses on the peninsula and called for international monitors to be given access there.

Moscow has argued that Crimea was incorporated in 2014 after the vast majority of local residents voted for joining Russia weeks after the ouster of Ukraine’s former Russia-friendly president, even though most of the world rejected the referendum as illegitimate.

Russian President Vladimir Putin marked the anniversary by speaking to residents of Crimea via video link and also attended a concert in Moscow marking the event. 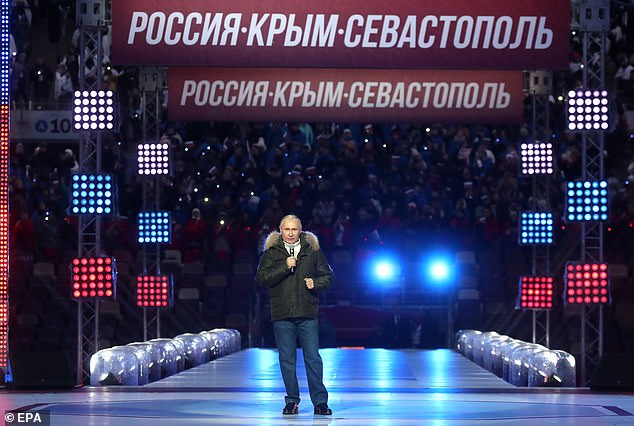 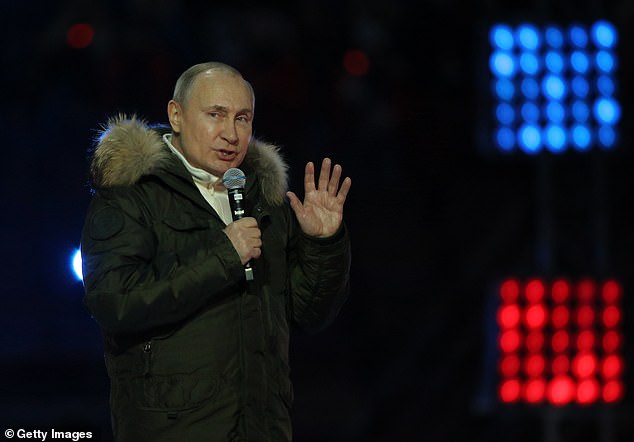 Russia was suspended from the Group of Eight, as it then was, in 2014, over its actions in Ukraine

‘It’s a holiday for our entire vast country,’ he said at the Luzhniki sports arena. ‘It’s the restoration of historic justice. Every inch of that land is drenched in the blood of Russian and Soviet soldiers, this land is sacred for Russia.’

The Black Sea peninsula became part of Ukraine in 1954 when Soviet leader Nikita Khrushchev transferred jurisdiction from Russia, a move that was a mere formality until the 1991 collapse of the Soviet Union meant that Crimea landed in an independent Ukraine.

The G-7 statement also cited Russia’s role in the ongoing conflict between pro-Moscow separatists and the government in eastern Ukraine. 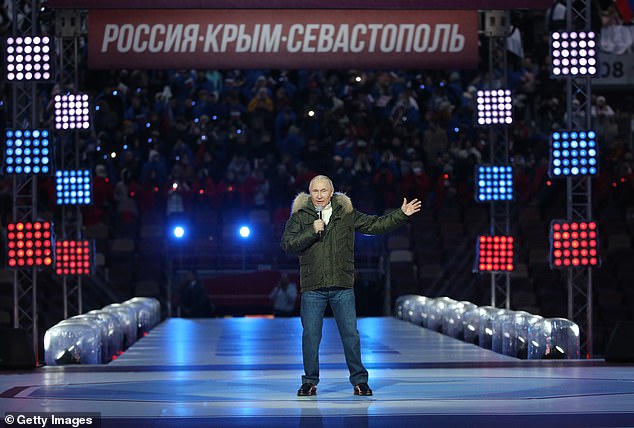 ‘We call on the Russian Federation to stop fueling the conflict by providing financial and military support to the armed formations it backs in eastern Ukraine, as well as by granting Russian citizenship to hundreds of thousands of Ukrainian citizens,’ they said.

The G-7 called for a diplomatic solution to the conflict that implements a series of agreements forged in the Belarusian capital Minsk.

Russia was suspended from the Group of Eight, as it then was, in 2014, over its actions in Ukraine.

Putin’s public appearance came as Russia recalled its ambassador to the U.S. in a dramatic escalation in the fraught relations between the two powers – after President Joe Biden referred to Russian President Vladimir Putin as a ‘killer.’

The move comes after the White House has spent weeks telegraphing a tougher posture toward Russia under a Biden administration – and Moscow has once again bristled at accusations that it serves as a ‘malign’ influence in global affairs.