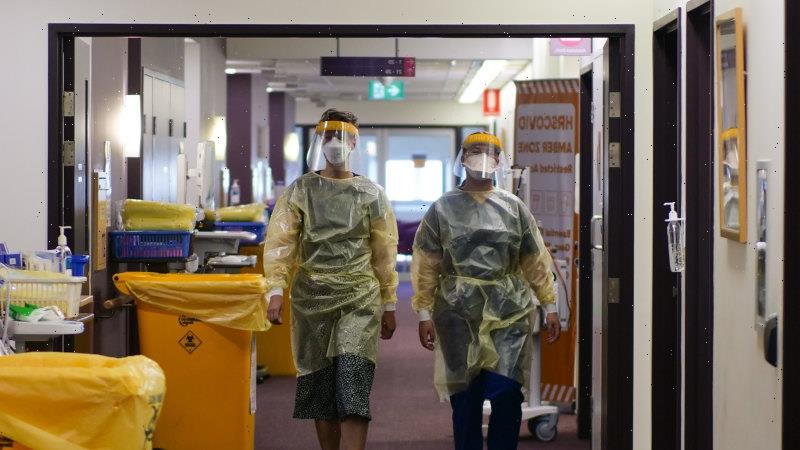 Melbourne’s public hospitals could open up to thousands of non-urgent elective surgery patients within 10 days, the national medical association has said, as long as Victoria’s COVID-19 infections and hospital admissions continue to decline.

On Friday, the Andrews government announced the statewide “code brown” emergency declaration would be lifted at noon on Monday, as COVID-19 hospitalisation admissions fell to 533. 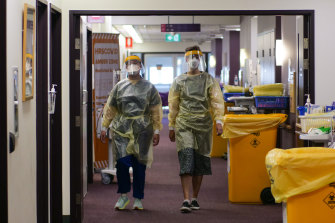 The “code brown” emergency is coming to an end.Credit:Kimberey Nichols

The code brown was called last month to help hospitals manage unprecedented demand due to the Omicron outbreak, as hospitalisations reached a peak of more than 1000 admissions a day, while 5000 healthcare staff were being furloughed.

More than 80,000 Victorians are on the elective surgery waiting list, up from 66,000 last October, with health experts estimating it could take longer than a year to catch up on the backlog.

But Victoria’s public hospitals, which have borne the brunt of the state’s Omicron wave, are calling for a “cautious” approach to resuming elective surgery, warning many that hospitals are still not ready to take on the extra workload.

Nurse ratios are still not being met at some hospitals, while Ambulance Victoria continues to be inundated with non-urgent COVID-19 related calls, nurses and paramedics say.

The Australian Medical Association’s Victorian president Roderick McRae said he believed Melbourne’s public hospitals could start offering up to 50 per cent of all category 2 elective surgeries from February 21, if cases continued to decline.

Dr McRae said he expected the government would be poised to decide this by late next week, while insisting that a “steady and sensible” approach was necessary.

“We support the state returning to services that are normal, while recognising the ongoing issues around return to school … and of course, we’ll be importing COVID-19 as tourism opens up, including into the more regional areas, where there’s very limited hospital resources.”

Victoria recorded 8521 new COVID-19 cases and 13 deaths on Friday, with 23 people on ventilators and 82 in intensive care. About 1800 healthcare staff are currently furloughed.

Under further changes announced, all regional public hospitals will resume category 2 procedures, while private hospitals in the regions will carry out up to 75 per cent of all elective surgery.

Most public hospitals in Melbourne will continue to be restricted to emergency and urgent elective surgery, except for the Peter MacCallum Cancer Centre and the Royal Eye and Ear Hospital, which will now resume all category 2 procedures.

Last week, the government announced all metropolitan private hospitals could resume 50 per cent of elective surgeries.

Health Minister Martin Foley said he would consider further easing of the rules next week if hospitalisations and infections continued to decline, while staff availability and furloughs would also be monitored. 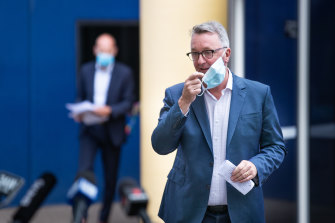 “As soon as possible, we will be returning not just back to normal – because in a COVID world with deferred care issues being what they are, we know that when it is safe to do so we will need to do more than just catch up – but bring down those deferred care cases as well,” Mr Foley said.

The decision should be made on a “hospital-by-hospital basis,” he said. This should factor in the individual hospital’s COVID-19 admissions and staff and resource capacity, along with the broader impacts of lifting the code brown declaration and opening up elective surgeries in other parts of the state.

”Some services really are very concerned that they’re not ready to just start doing category 2 again straight away because until code brown ends on Monday, we don’t know what how long it’s going to take to get back to normal,” Mr Symondson said.

Health program director at the Grattan Institute, Stephen Duckett, said while it was forseeable that Melbourne public hospitals would have the capacity to carry out some non-urgent elective surgeries very soon, he recommended the government allow several weeks, or possibly up to a month, for the health system to “stabilise” first, to avoid a mass exodus of burnt-out staff.

“Healthcare workers have done wonders over the past two years,” he said. “You want to give them some relief rather than saying ‘yeah, you’ve done all this, that was yesterday … tomorrow is back to normal on elective procedures’.”

Professor Duckett estimated it could take a year “or more” for the health system to catch up on the elective surgery backlog.

Dr McRae also called for “nuanced” approach to the change in rules on elective surgeries that would allow hospitals to limit their cases if the demand for beds suddenly increased due to a COVID-19 outbreak.

Devin Hester, the record-setting Chicago Bears returner, misses out in his 1st bid for the Pro Football Hall of Fame. Here’s a look back at his ‘ridiculous’ career. – The Denver Post