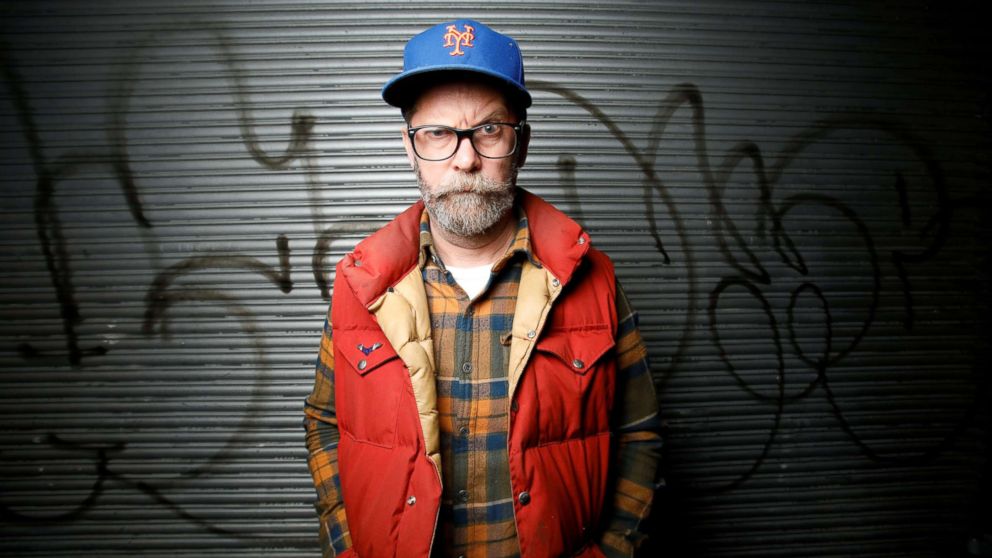 There’s a rite of initiation taking place across the country. “I’m a proud Western chauvinist,” these men declare, following with, “I refuse to apologize for creating the modern world.”

Some of them will go into the next stage through a bizarre ritual: the pledge must rattle off the names of five breakfast cereals while being punched by current members.

These are parts of the induction process for men who want to join the controversial self-described fraternity called the Proud Boys. Their rallying cry is what they call “Western chauvinism,” which the group’s founder, Gavin McInnes told ABC News’ Paula Faris to mean “inordinately patriotic” to Western civilization.

“Ninety-nine percent is meeting in a bar once a month and drinking beer just like everyone else,” McInnes said. “The other 1 percent is escorting conservative speakers to and from their cars or wherever they’re going.”

McInnes, formerly of Vice Media, founded the group in 2016. He is known for what some call incendiary claims, such as telling viewers of his Rebel Media show to “be dubious of Muslims, if you see something, say something,” and that “The data says that women have become less happy since feminism. And I blame them being ripped out of the kitchen.”

In the two years since the Proud Boys’ founding violence has seemed to follow in its wake. In recent months, its members have participated in street brawls during protests in Portland, Oregon, Seattle and New York City.

The New York City incident when a violent confrontation broke out between members of Proud Boys and the anti-fascist group Antifa after a speech McInnes gave at the Metropolitan Republican Club. The Proud Boys claimed Antifa members attacked them, but now 10 Proud Boys are facing criminal charges and some of them could face possible jail time, according to authorities.

That incident led to McInnes announcing last month that he was quitting the group.

“I’m officially disassociating myself from the Proud Boys, in all capacities, forever, I quit,” McInnes said in a resignation video posted online. “I’m told by my legal team and law enforcement that this gesture will help alleviate their sentencing… We are not an extremist group and we do not have ties with white nationalists.”

McInnes, a conservative media personality himself, has given speeches during his Proud Boys tenure. In one he gave at New York University last year after a clash with Antifa, in he said, “Violence doesn’t feel good, justified violence feels great, and fighting solves everything.” In another speech he gave in Feb. 2017, he said, “I want violence. I want punching in the face.” 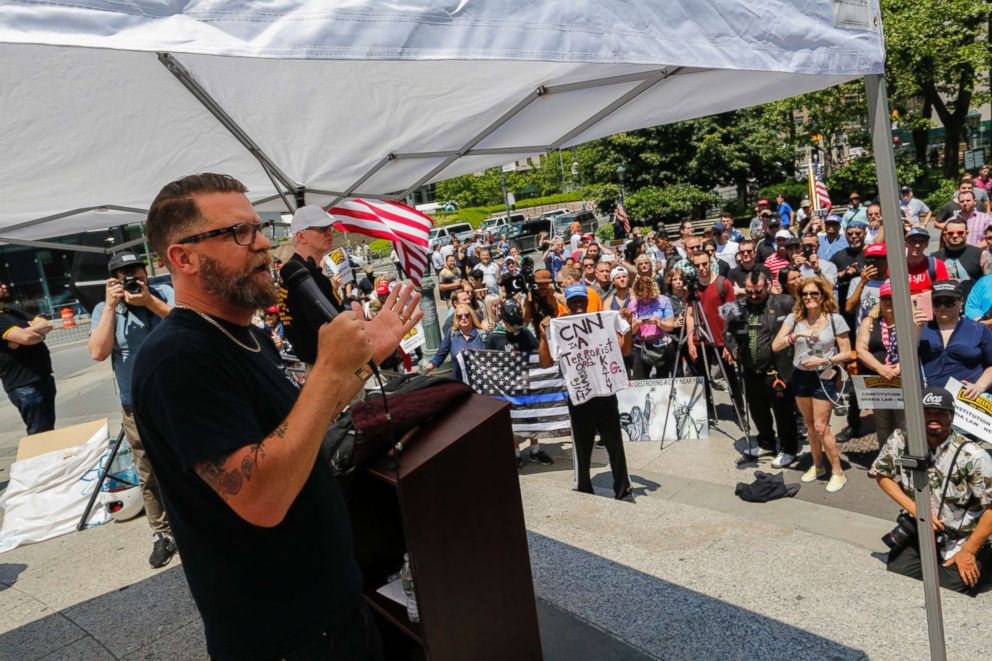 But McInnes denied that he is inciting violence, saying that his statements “are pretty mainstream things as far as I’m concerned. Justified violence is protecting some woman who was getting beaten up.”

McInnes was firm in saying that the Proud Boys are not racists, misogynists, a hate group, “hipster Nazis,” white supremacists nor extremists.

The group’s founder, Gavin McInnes has used his show to evangelize the Proud Boys manifesto, which outlines various mottos such as, “legalize drugs,” “close the borders” and “venerate the housewife.”

“I believe that 95 percent of women would be happier at home,” McInnes told Faris. “I’m fine with being perceived as a misogynist. That’s fine. [But] extreme radical hate group… that’s nuts.”

And at the heart of the Proud Boys is the belief that “the West is the best.”

“Russia sucks, China sucks, the Middle East is not my cup of tea,” McInnes said. “I think it’s inarguable that the West is superior. The West is built on liberty and meritocracy, and busting you’re a–.”

McInnes said he sees himself as a “provocateur” that does “satirical commentary.”

But some believe he uses jokes as a cover for dangerous ideas, citing certain statements he has made, including on “The Joe Rogan Experience” podcast, in which he said “Mexico sucks because of Mexicans. What have they contributed to society in the past 100 years?” But McInnes says that comment was taken out of context.

“Someone was b—-ing about how America and their foreign policy, and it’s ruined all these countries, and it’s ruined Mexico, and I said, ‘America did not ruin Mexico. Mexicans are responsible for Mexico. Mexicans ruined Mexico,’” McInnes told Faris. “That’s the tone there, but when it’s taken out of context, it sounds like some sort of reverend of hate.”

McInnes claims the group was meant to be nothing more than a benign gathering of politically incorrect, conservative men full of sophomoric antics and a lot of beer drinking. Admist the controversy, he claims that the group, which even adopted the song “Proud of Your Boy” from the musical “Aladdin” as its anthem, now has over 10,000 members worldwide.

His move to start the group coincided with President Trump’s candidacy and McInnes called election night 2016 “one of the greatest nights of my life.”

“We love Trump,” he said. “[Election night 2016] was just heaven, and we thought, ‘finally, all of this politically correct pandering, all this pedantic social justice warrior stuff, it’s going to at least take a break.”

Their chapters hold monthly meetings that are closed to the public and ban women. But a select group of Proud Boys members agreed to meet with “Nightline” at a bar in New York City to talk about what the group means to them. 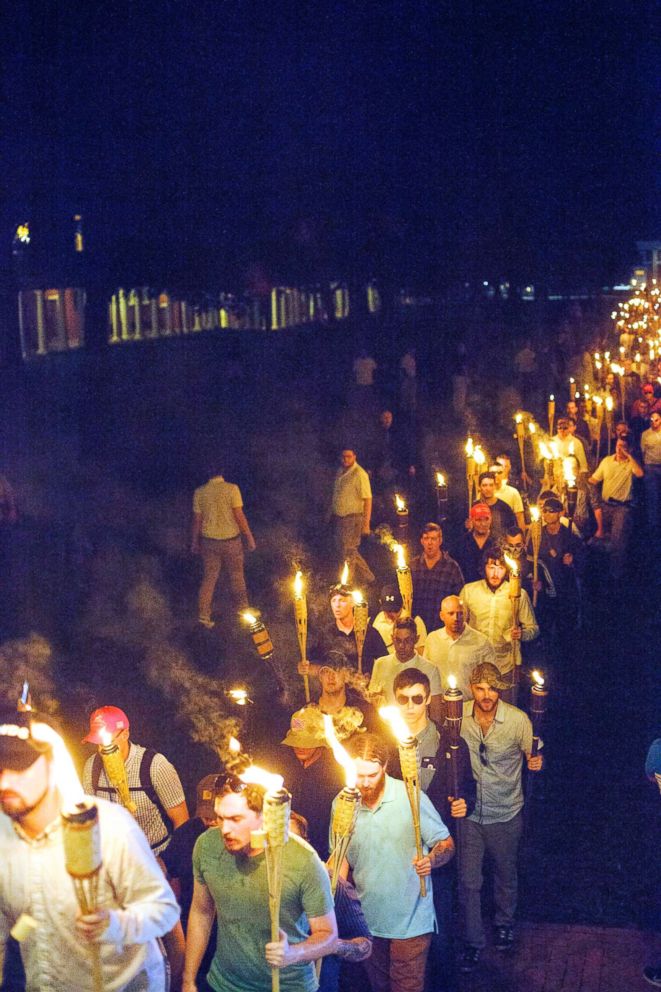 “[It’s] an organization that doesn’t care who you sleep with, what god you pray to,” said another member named Yosef. “All we care about is that you have a good time… and improve yourself.”

Proud Boys members are often photographed displacing a certain hand gesture commonly known as the symbol for “OK,” but is also perceived as a white power hand symbol. But the members “Nightline” spoke with said the “white power hand symbol” was a “joke” that was started and spread by 4-chan, an online forum often linked to the extreme right where users post anonymously.

“If you see back in 2016, people were doing that, and that’s because when you see Trump talk he’s like, ‘This is the greatest country in the world,’” Mantis said, as he demonstrated the symbol. “So that was what it was originally, and then 4chan thought it would be funny to make you guys believe that it was racist, so they said that this was like a P, and this was a W, and it was a white power thing.”

These Proud Boys members claimed that 4chan spread this meme with the intention of riling up the left.

When asked if continuing to display the gesture deepens what they say is a misunderstanding about the group, the Proud Boys members defended their position.

“They don’t like that we exist, so why am I trying to prove myself to people that are offended at my existence?” Mantis said. “The fact that I support Trump, the fact that I’m a conservative, I mean everything that I am triggers the left. It gets to the point where I just don’t care anymore.”

When “Nightline” asked McInnes about the hand gesture, he said, “If I was their [Proud Boys] boss, I’d say, ‘Guys, this is causing too much trouble. Please stop doing it in photos.’”

At least one former member says there is something more insidious taking over the Proud Boys.

“As soon as I saw what the trajectory was, I had that kind of gut feeling and I started moving myself away from them,” said Dante Nero, a comedian and self-described relationship guru, who has made appearances on McInnes’ show, “The Gavin McInnes Show,” which ended last year.

Nero had been referred to as the Proud Boys’ “pope,” but he said he has left the movement, saying what happened at the infamous Unite the Right rally in Charlottesville, Virginia, last summer is a cautionary tale. 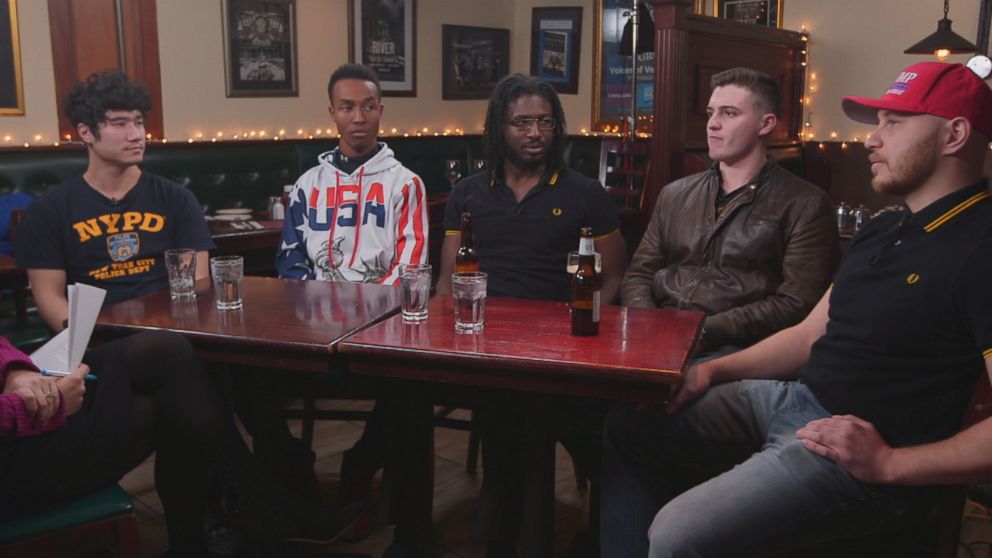 Before that notorious rally, Jason Kessler, the rally organizer, had appeared on McInnes’ show and is reported to have attended Proud Boys meetings in Virginia.

“Everybody is not perpetuating violence, but the complicitness in knowing that there’s violence going on, the complicitness in that you’re not checking people who have racist and violent tendencies makes you part of the problem,” Nero said. “So is… the Proud Boys solely responsible for Charlottesville? Absolutely not. There are members who just—I’m quite sure there are members who just joined because their friend was in it.”

The group’s “philosophy,” Nero said, “emboldened” those who believe the group provides “a safe haven for those kinds of racists ideas.”

But McInnes said he quickly disavowed any Proud Boys that were associated with the events in Charlottesville.

“If anyone from our group showed up at Unite the Right, they were instantly booted, never spoken to again, ex-persona non-grata. And I made that clear months before,” he told Faris.

But after McInnes’ departure, the Proud Boys elected a member named Enrique Tarrio as its chairman, who did attend the Unite the Right rally, though he told ABC’s Miami-based affiliate WPLG that he had misgivings about the torchlight march and did not participate in it.

But when asked if he thought white supremacy existed in the U.S., McInnes said, “not to any measurable degree.”

McInnes’ wife, who asked not to be named due to safety concerns, said it’s a relief to no longer have her husband be part of the Proud Boys.

“This is impeding on the peace for my opportunity to raise my kids,” she said.

His wife said she was raised in a “liberal household” and is a “diehard Democrat.” She said the way her husband’s politics have evolved over the years have been a “challenge” and have had a negative impact on her.

“I respect anyone’s right to have their opinion,” she continued.

Meanwhile, McInnes’ account was suspended from Twitter in August, he was banned from Facebook in October, and this week, his YouTube account was terminated for what they say is copyright infringement. He was also ousted from Blaze TV after less than a week at the conservative network.

McInnes responded in a statement to these social media bans by saying he was a victim of “lies and propaganda,” adding, “I’m finally out of platforms and unable to defend myself.”

When asked if he bore any responsibility for what the Proud Boys have become, he said, “Yes, I do bear any responsibility. I’m not guilt-free in this,” adding, “There’s culpability there. I shouldn’t have said ‘violence solves everything’ or something like that without making the context clear and I regret saying things like that.”

Still, Mcinnes remained firm in saying he was not apologizing for the group, and that he would not take anything back. “No, that ship has sailed,” he said.