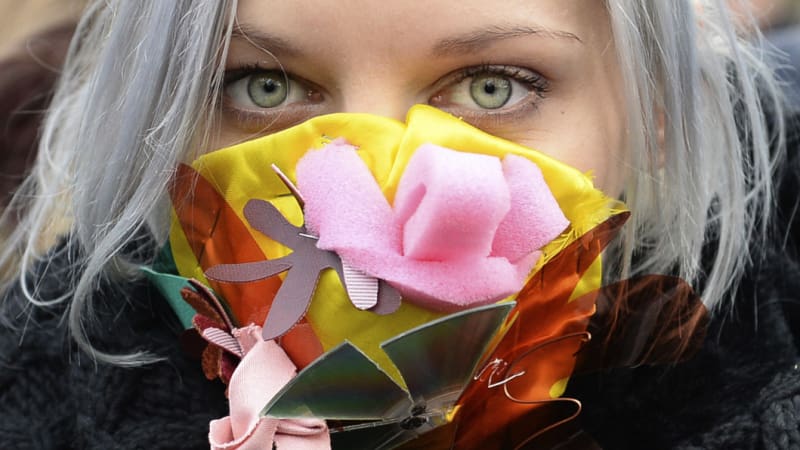 Katowice: Thousands of people from around the world have marched through the southern Polish city that's hosting this year's UN climate talks, demanding that their governments take tougher action to curb global warming.

Protesters included farmers from Latin America, environmentalists from Asia, students from the United States and families from Europe, many of whom said climate change is already affecting their lives. 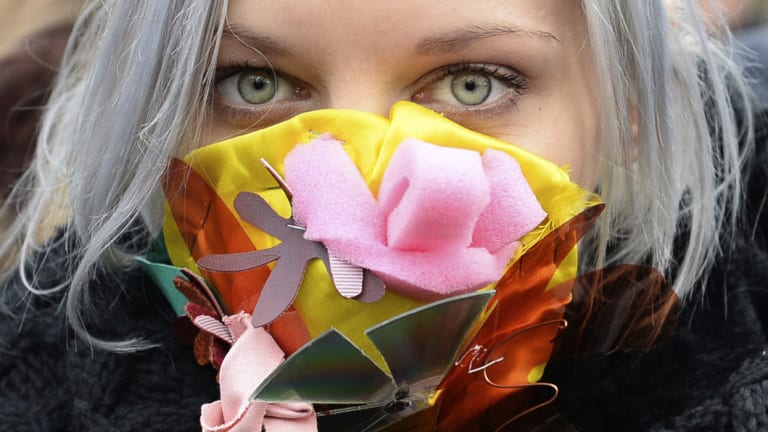 A climate activist at the March for Climate in a protest against global warming in Katowice, Poland, on Saturday.Credit:AP

Chanting "Wake up! It's time to save our home!" and holding banners including one reading "Make the planet great again", protesters marched through Katowice accompanied by a heavy police presence that included officers on horseback.

The "March for Climate" passed largely peacefully, though three people were detained after a small scuffle with police, a Katowice police spokeswoman said.

Earlier on Saturday, environmental groups had complained that some of their activists were being turned back at the Polish border or deported. One Belgian activist was allowed to enter the country after her country's ambassador intervened with Polish authorities.

Poland  introduced temporary random identity checks ahead of the UN climate conference, arguing they were needed for security. 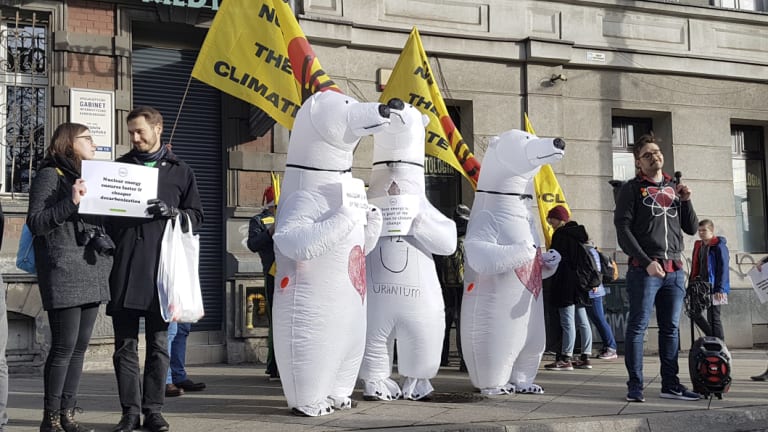 Activists dressed in polar bear costumes call for nuclear energy to replace fossil fuels on the sidelines of a climate march in Katowice on Saturday.Credit:AP

Inside the UN meeting, negotiators were concluding the first week of talks, which are focused on finalising the Paris rule book that determines how signatories to the 2015 deal record and report their greenhouse gas emissions.

In a recent report, the Intergovernmental Panel on Climate Change said drastic action would be needed to achieve the Paris accord's most ambitious target of keeping global warming below 1.5 degrees Celsius.

Illustrating the sensitivity of this message for some governments, major oil exporting countries including Saudi Arabia and Russia objected to "welcoming" the IPCC's report. The issue is now one of several that will be left to government ministers, who begin arriving in Katowice on Monday to try to break remaining deadlocks.

Environmental groups want countries to send a strong signal that they're ready for more ambitious action in the years ahead, but some protesters on Saturday felt that governments alone would not do enough to fight climate change.

"I've had enough of just sitting and looking at politicians deciding things for us. It's time for us to tell them what we want and to start a grassroots revolution," said Anna Zalikowska.

Similar marches for the environment took place in France, but were overshadowed by a larger "yellow vest" protest in Paris staged by people angry over fuel tax increases.

The tax rise, now put on hold, was aimed at encouraging drivers to reduce their use of fossil fuels, a measure experts say is necessary to nudge consumers toward cleaner alternatives.

Resistance to the fuel tax is a blow to French President Emmanuel Macron, who sees himself as the guarantor of the Paris accord.

US President Donald Trump, who has announced he's pulling the United States out of the agreement, claimed on Saturday that "people do not want to pay large sums of money … in order to maybe protect the environment".

Economists say the price of curbing climate change is actually far lower than the eventual cost of coping with the catastrophic famines, storms and sea level rises that will happen with a warming climate.

The Climate Action Network, an umbrella group for environmental organisations, on Saturday gave its Fossil of the Day award to the United States after Washington's diplomats objected to linking human rights to climate change.

Hundreds of US states, cities, businesses and churches, however, have planted the American flag at the talks in an effort to show that many people in the US remain committed to curbing global warming despite the stance of their president.

The opening of the US Climate Action Centre alongside pavilions from Britain, Poland and New Zealand contrasts with the low-key presence of the official US government delegation.

Envoys from the Us administration  are holed up in a cubicle away from the main concourse. They  have one public event planned promoting US technological innovations.

California billionaire Tom Steyer, who is considered a possible 2020 Democratic presidential candidate , said the US has to return to leading the world in tackling climate change.

He urged environmental activists not to lose sight of the wider concerns of American voters in the coming years if they want political change.