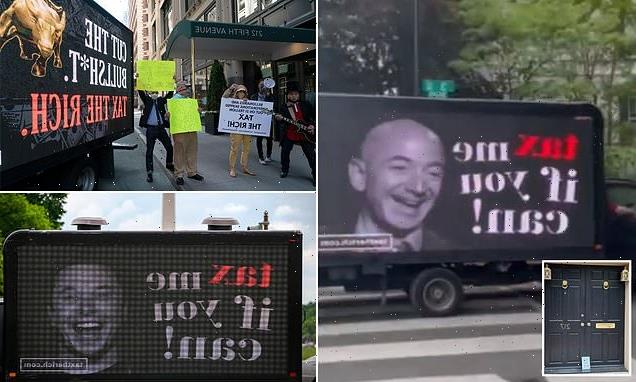 Tax the rich – us! Pro-tax millionaires rally in NYC and Washington DC in FAVOR of Biden’s plan for higher rates on the country’s biggest earners

A group of millionaires drove a truck around key sites in New York and Washington DC on Monday – including Jeff Bezos’s homes in both cities – begging to pay more in taxes.

The group, which calls itself the Patriotic Millionaires, is arguing in favor of Joe Biden’s tax plan, which would raise rates on many individuals and on corporations. Two of its highest-profile members are Abigail Disney, the daughter of longtime Disney chief Roy Disney, and Kathleen Kennedy Townsend, the daughter of Robert F. Kennedy.

With trucks carrying flashing billboards bearing Jeff Bezos’s face that said: ‘Tax me if you can!’ the group also held a small rally outside of Bezos’s New York apartment. The Amazon chief is ranked No. 1 in the world on Forbes’ list of billionaires, with a net worth of $187 billion.

The group argues billionaires and millionaires need to pay more. It scheduled the events for this year’s tax-filing day.

‘Selfish billionaires, Wall street tycoons, and CEOs are all fighting tooth and nail to protect their own special tax breaks, and misleading the American people about what Biden’s tax plan would really entail,’ it said in a statement announcing the events. 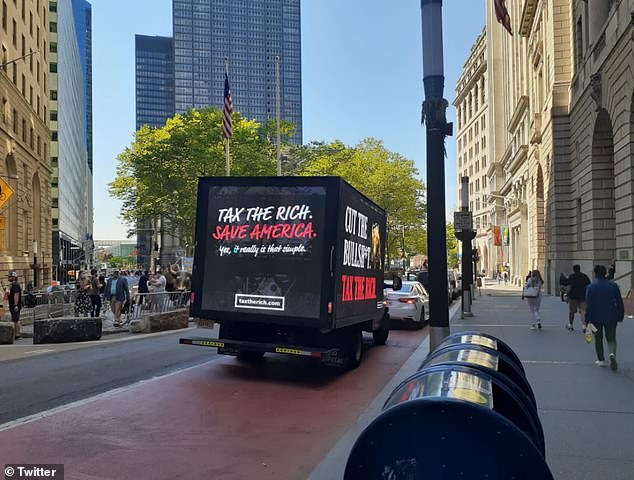 The trucks were parked outside of sites in New York and Washington DC, including near Wall Street 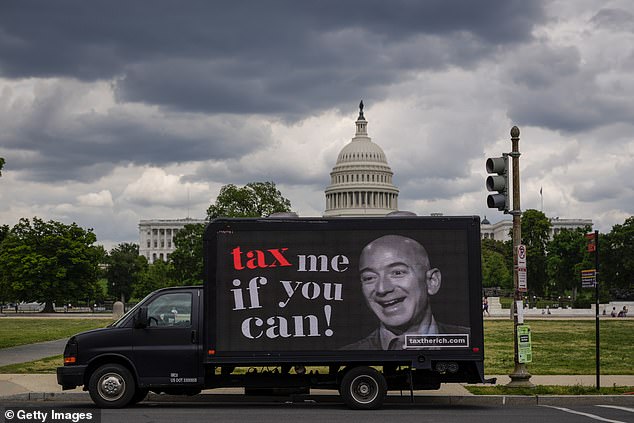 In front of the U.S. Capitol, one of the group’s trucks sports Jeff Bezos’s face

The tax-the-rich trucks also hit high-profile sites like the bronze bull that sits outside of the New York Stock Exchange on Wall Street, ‘billionaire’s row’ on New York’s 57th Street; and Jeff Bezos’s homes in New York and Washington DC.

The group also left one of its books on the doorstep of U.S. Sen. Mitch McConnell, Republican leader.

Patriotic Millionaires was formed in 2010 to call for an end to the George W. Bush-era tax cuts, according to the group’s website.

The members of the group have incomes of $1 million or assets worth more than $5 million.

Pearl told CNBC that his organization will be advocating for a wealth tax and other tax increase proposals.

‘Tax receipts from millionaires, billionaires and corporations should make up a greater proportion of federal tax receipts,’ the group argues in its manifesto.

Erica Payne, a former consultant who founded the group and is its president, told CNBC that Bezos, the founder and chairman of Amazon, is the poster boy for tax policy.

She mentioned his 417-foot yacht now under construction that is said to have a price tag of more than $500 million.

An Amazon spokesperson didn’t return a request for comment from CNBC. He said in April that he supported the Biden administration’s ‘focus on making bold investments in American infrastructure.’ 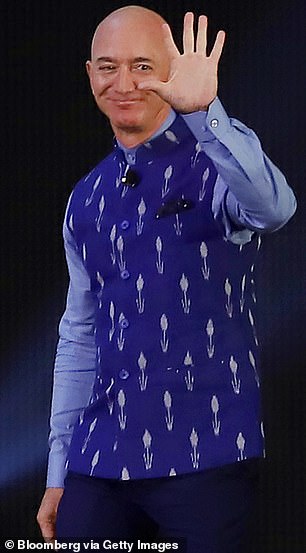 ‘We recognize this investment will require concessions from all sides – both on the specifics of what’s included as well as how it gets paid for (we’re supportive of a rise in the corporate tax rate,’ he said in a statement.

Because of his massive wealth, Bezos has been the target of protests by some when it comes to paying taxes. Amazon itself has been flogged as using the tax code to minimize its taxes to the point of paying nothing.

Monday’s rally comes after the Biden administration’s announcement in April to raise $1.8 trillion in additional revenue to pay for the president’s ‘human infrastructure’ bill, which claims it would boost education, labor programs, universal pre-K and continue an expanded child tax credit.

Capital gains – where Biden has already called for changes to end a major ‘loophole’ – would almost double from their current 20 per cent to 39.6 per cent for those earning more than $1 million a year.

For those earning more than $1 million in high-tax states, the total rate will be even higher given the combined federal and state tax capital gains.

According to figures from the Tax Foundation, 892,420 Americans fall into the highest rate of income tax, which was 37 per cent under Trump. 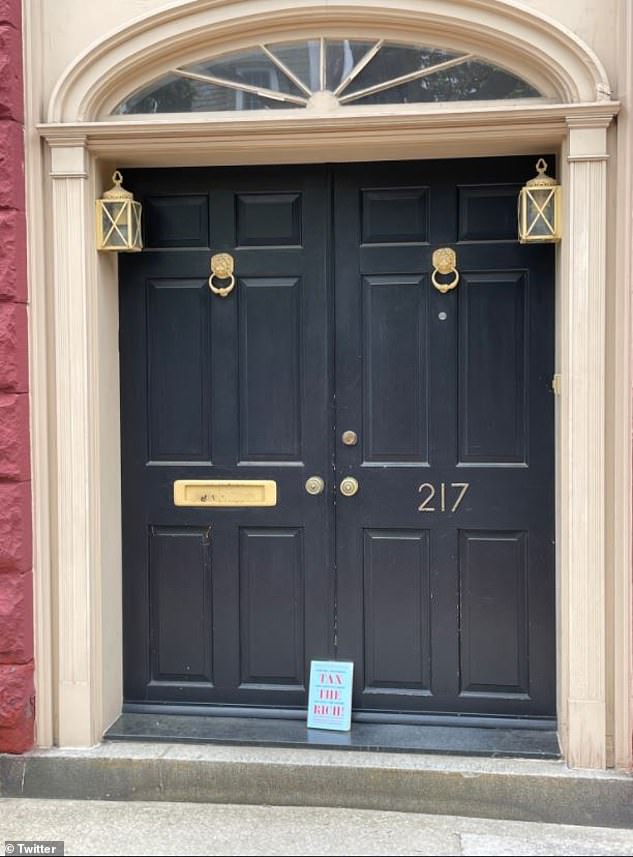 The group left a copy of its book, Tax the Rich!, outside U.S. Sen. Mitch McConnell’s Washington DC home

The hikes would be the highest tax rate on investment gains, which are mostly paid by the wealthiest Americans, since the 1920s.

The top long-term capital-gains rate applies to single taxpayers with more than $445,850 of income in 2021. Investors currently pay a 23.8 per cent top rate on long term capital gains.

The White House proposal would put in place a 39.6 per cent rate on transactions for the just over a million American citizens earning $1 million

With an existing surtax on investment income, some earners could pay a rate of 43.4 per cent, Bloomberg.com reported.

The rate has not exceeded 33.8 per cent in the post-World War Two era.

Slogans on the billboard trucks include ‘tax me if you can,’ ‘Tax the rich, save America. Yes, it’s really that simple’ and ‘cut the bulls***t. Tax the rich.’

Joe Biden’s tax hikes targeting the rich: Who will have to pay

Top income tax bracket for those earning more than $523,601 a year:

According to figures from the Tax Foundation, 892,420 Americans fall into the highest rate of income tax, which was 37 per cent under Trump.

Capital gains tax on investment sales for those earning more than $1million a year :

Around one million people in the US, or 0.32% of the population, have recorded a gross income of over $1million.

For those earning more than $1 million in high-tax states, the total rate will be even higher given the combined federal and state tax capital gains.

Wealthy residents pay Capital Gains on the growth in value of investments when they are sold. They are mainly placed on profitable stock trades and real estate deals. They can also apply to sales of collectible cars, art, businesses, gold.

Investors are taxed on the difference between what they paid for the asset and what they sold it for.

Investments held for at least one year tops out at 20% and those held under a year are taxed the same as salaries and wages. An additional 3.8% tax applies to those earning at least $200,000.

The US rate ranks in the middle of countries around the world.

Investors generally support lower capital gains tax because they say it rewards entrepreneurship and encourages people to sell what they own.

These hikes have already been proposed in the first part of his infrastructure plan.

He is also targeting US firms’ profits overseas and companies who use offshore businesses.

Biden has still vowed that no one earning under $400,000 a year will pay more taxes in his administration.

Where did Ariana Grande get married?
World News