London: Prince Andrew will argue that a sexual abuse lawsuit filed against him is invalid because his accuser struck a secret deal with Jeffrey Epstein referencing “royalty”.

Virginia Roberts Giuffre settled with the convicted sex offender in 2009 for undisclosed damages after lodging a criminal complaint accusing The Duke of York of sexual exploitation and abuse. 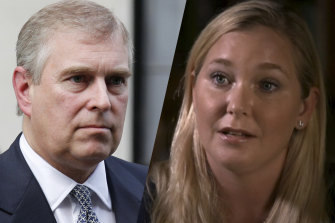 Prince Andrew denies having had sex with Virginia Giuffre when she was 17. Giuffre says she was forced by Jeffrey Epstein to sleep with the duke.Credit:AP, BBC

The confidential agreement they signed in Florida, in which she allegedly promised not to take further action against the financier or his associates, has since remained sealed.

But after Giuffre sued Andrew for undisclosed damages, claiming she was forced to have sex with him three times when she was 17, the document has become of significant interest to his legal team. His US-based lawyer, Andrew Brettler, told a pre-trial hearing last month he believed it released the Duke and others from “any and all potential liability”.

It was last week released to Andrew’s legal team on the orders of a judge.

The reference to royalty is likely to be seized upon by his legal team as they argue that it nullifies Giuffre’s claim. No other member of the royal family has been implicated in the scandal or is thought to have come into contact with Giuffre, allowing them to insist it could only apply to Prince Andrew. 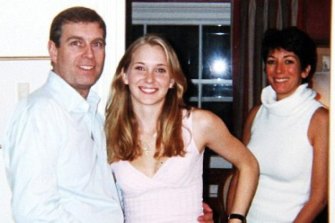 Prince Andrew pictured with Virginia Giuffre at the home of Ghislaine Maxwell (right) in London in 2001.

The reference appears to accord with Giuffre’s original complaint against Epstein, filed under the pseudonym Jane Doe in Florida, which stated: “In addition to being continually exploited to satisfy the defendant’s every sexual whim, Plaintiff was also required to be sexually exploited by defendant’s adult male peers, including royalty, politicians, academicians, businessmen and/or other professional and personal acquaintances.”

The ensuing settlement was used by Alan Dershowitz, Epstein’s former lawyer, to get an abuse claim that Giuffre made against him struck out in August. He urged the judge in his own case, Loretta Preska, to unseal the document, warning that he was “compelled not to sit back silently” knowing its contents. “The issue before the court is a matter of professional ethics and the interests of justice,” he said.

However, David Boies, Giuffre’s lawyer, has said the royal reference is “irrelevant” to the case. He originally urged a judge not to disclose the document to Andrew, but later said he should be allowed to review it.

Andrew has until October 29 to respond to the civil suit, with a remote hearing scheduled for November 3.