Washington: A House committee’s prime-time hearing will offer the most compelling evidence yet of then-President Donald Trump’s “dereliction of duty” on the day of the January 6 insurrection, with new witnesses detailing his failure to stem an angry mob storming the Capitol, committee members say

“This is going to open people’s eyes in a big way,” said Republican Adam Kinzinger, a member of the House committee investigating the riot who will help lead Thursday’s session with Republican Elaine Luria. “The president didn’t do anything.” 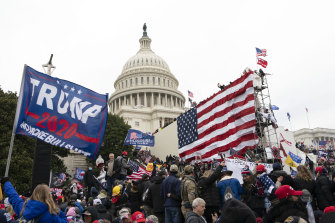 Violent insurrectionists loyal to then-president Donald Trump stand outside the US Capitol in Washington on January 6, 2021.Credit:AP

After a year-long investigation, the House January 6 panel is seeking to wrap up what may be its last hearing, even as its probe continues to heat up.

Friday morning’s hearing will be shown in prime-time Thursday in the US for the first time since the June 9 debut that was viewed by an estimated 20 million people.

The committee says it continues to receive fresh evidence each day and isn’t ruling out additional hearings or interviews with a bevy of additional people close to the president. One such figure is Steve Bannon, whose trial begins this week on criminal contempt of Congress charges for refusing to comply with the House committee’s subpoena.

Bannon is charged in Washington’s federal court with defying a subpoena from the January 6 committee that sought his records and testimony. He was indicted in November on two counts of criminal contempt of Congress, one month after the Justice Department received a congressional referral. Each count carries a minimum of 30 days of jail and as long as a year behind bars. 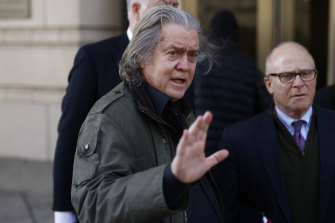 Bannon’s trial follows a flurry of activity in the case since July 9. Over a week ago, the former White House strategist notified the committee that he is now willing to testify. His lawyer, Robert Costello, said the change was because Trump has waived his executive privilege claim from preventing the testimony.

Bannon, 68, had been one of the most prominent of the Trump-allied holdouts in refusing to testify before the committee. He has argued that his testimony is protected by Trump’s claim of executive privilege.

The January 6 committee also issued an extraordinary subpoena last week to the Secret Service to produce texts by Tuesday from January 5 and January 6, 2021, following conflicting reports about whether they were deleted.

But panel members say Thursday’s hearing will be the most specific to date in laying out and weaving together previously known details on how Trump’s actions were at odds with his constitutional legal duty to stop the January 6 riot.

Unlike members of the public who generally have no duty to act to prevent a crime, the Constitution requires a president to “take care that the laws be faithfully executed.”

“The commander in chief is the only person in the Constitution whose duty is explicitly laid out to ensure that the laws are faithfully executed,” Luria said. “I look at it as a dereliction of duty. (Trump) didn’t act. He had a duty to act.”

Luria said the hearing will highlight additional testimony from White House counsel Pat Cipollone and other witnesses, not yet seen before, “who will add a lot of value and information to the events of that critical time on January 6.”

She cited Trump’s inaction that day for more than three hours, along with a tweet that afternoon criticising Vice President Mike Pence for lacking the courage to contest Democrat Joe Biden’s win in the 2020 presidential election that may have served to egg on the mob.

“We will go through pretty much minute by minute during that time frame, from the time he left the stage at the Ellipse, came back to the White House, and really sat in the White House, in the dining room, with his advisers urging him continuously to take action, to take more action,” Luria said.

The hearing comes at a critical juncture point for the panel, which is racing to wrap up findings for a final report this fall. The committee had originally expected at this point to be concluding much of its investigation with a final hearing but is now considering possible options for additional interviews and hearings, panel members said.

For instance, the committee took a rare step last week in issuing a subpoena to the Secret Service, an executive branch department. That came after it received a closed briefing from the Homeland Security Department watchdog that the Secret Service had deleted texts from around Jan. 6, according to two people familiar with the matter.

The finding raised the startling prospect of lost evidence that could shed further light on Trump’s actions during the insurrection, particularly after earlier testimony about his confrontation with security as he tried to join supporters at the Capitol.

“That’s what we have to get to the bottom of,” said Luria, regarding possibly missing texts. “Where are these text messages? Can they be recovered? And we have subpoenaed them because they’re legal records that we need to see for the committee.”