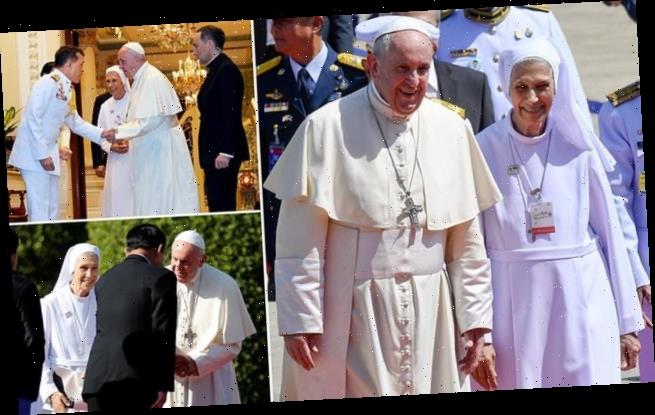 Pope's cousin steals the spotlight while guiding him around Thailand

Pope’s second-cousin steals the spotlight while guiding him around Thailand as the Sister holds him up during a royal visit, takes her time translating his speech, then teases him for only visiting Bangkok

As the leader of the world’s 1.3billion Catholics, Pope Francis is a difficult man to upstage – but his 77-year-old second cousin has made a good job of it during his visit to Thailand.

Sister Ana Rosa Sivori, who preaches in Thailand, has stuck by Francis’s side throughout his tour, providing help as a translator, explainer of local customs, and light comic relief during often-sombre prayers and political summits.

On Thursday, she joined him for an audience with Thailand’s King and Queen, at one point leaving him waiting in the car while she chatted with them, before catching up.

The following evening, as Francis deviated from prepared remarks during a speech after prayers, she took a moment to write down and translate what he was saying.

He glanced at her, eyebrows raised, motioning for her to hurry up which drew laughter from the crowd. 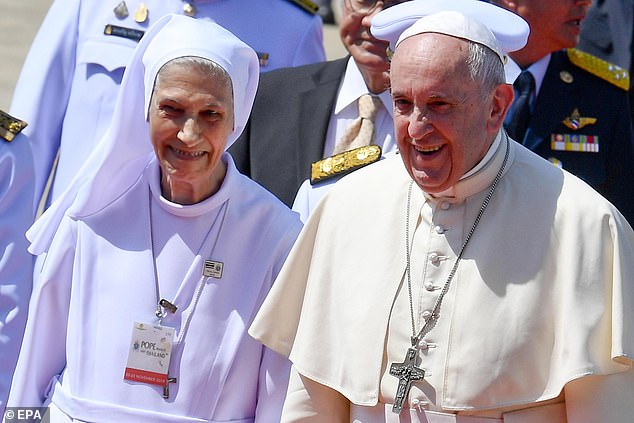 Sister Ana Rosa Sivori, 77 (left), the Pope’s second-cousin, has joined him on parts of his trip to Thailand, acting as translator and guide to a country she has preached in for five decades 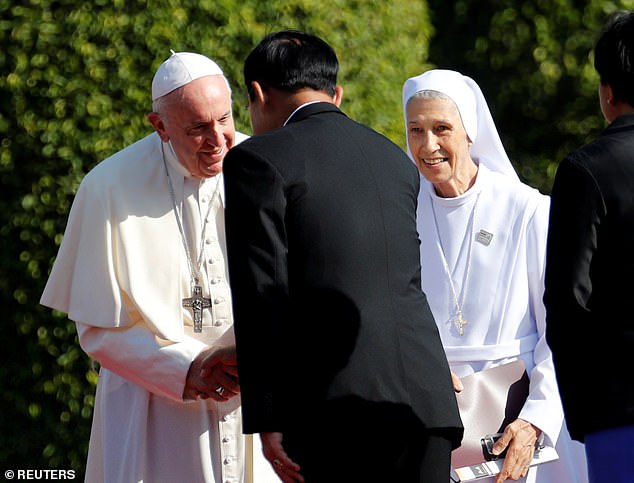 Sivori has joined the pontiff for some of his most high-profile meetings, including with Thai Prime Minister Prayuth Chan-ocha (pictured) on Thursday 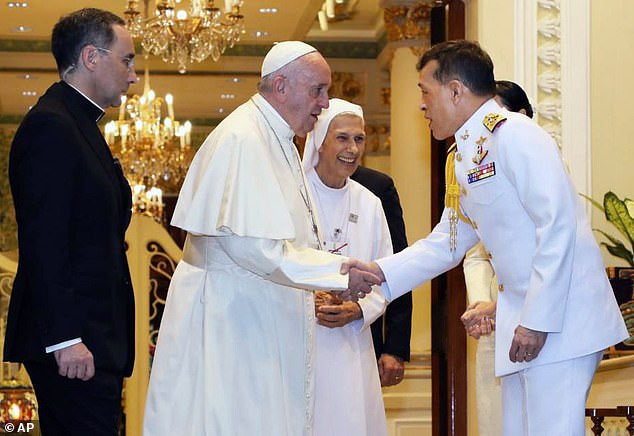 She also joined the Pope as he met with Thai King Vajiralongkorn (right). At the end of their meeting, she kept him waiting in the car while she chatted with the royals 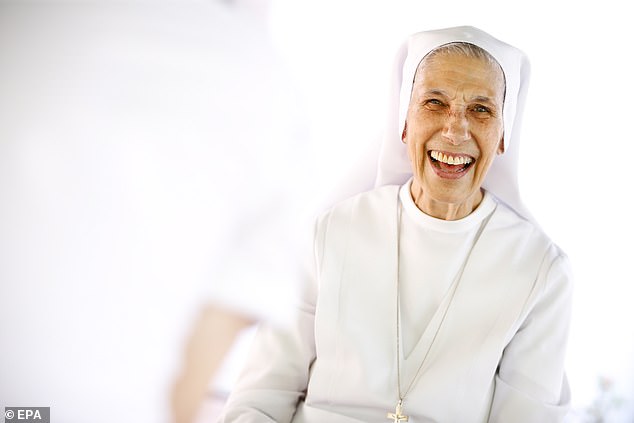 Sivori grew up in Argentina, where her father was cousins with Francis’s mother, before coming to Thailand as a young nun in 1966

Sister Sivori’s star turn comes as a breath of fresh for a papal visit, when the pontiff is typically surrounded by male advisers who stick to the shadows.

Not so Sivori, who treats Francis with the respect owed a pope but nevertheless displays a familiarity which speaks to a deeper connection predating his time at the top of the Catholic church.

She grew up in Argentina, where her father and Francis’s mother were cousins, and the pair knew each other growing up.

She has said her father knew early on that there was something special about ‘Jorge,’ a sentiment that spread to the rest of the family.

‘He always said “No one touches Jorge.” He had a special affection for him,’ Sivori told Italian journalists before the trip. 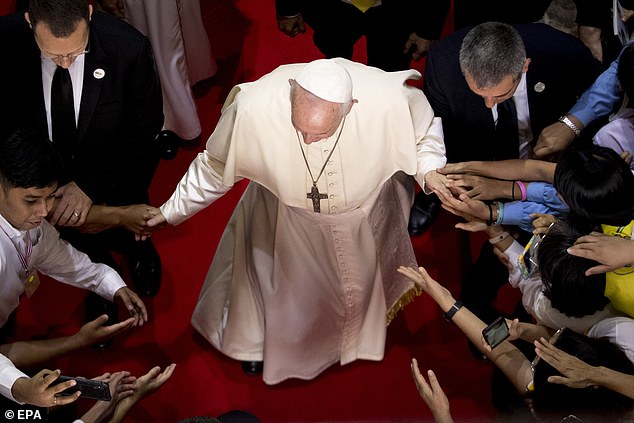 Francis concluded the second full day of his visit to Thailand with prayers at St Peter’s church in Nakhon Pathom province. He will fly to Japan tomorrow 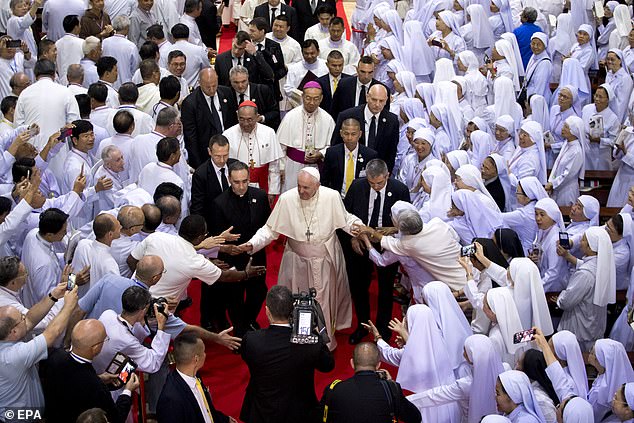 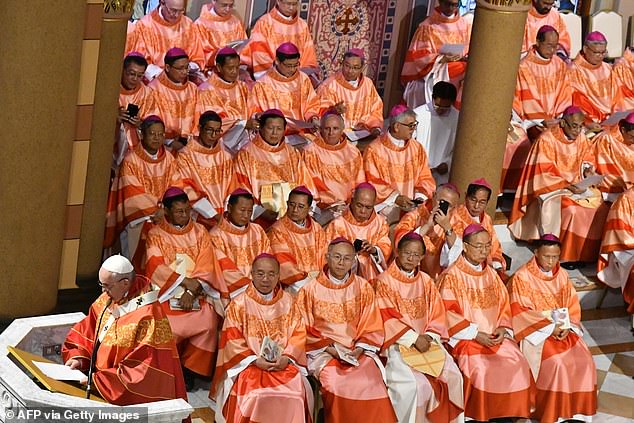 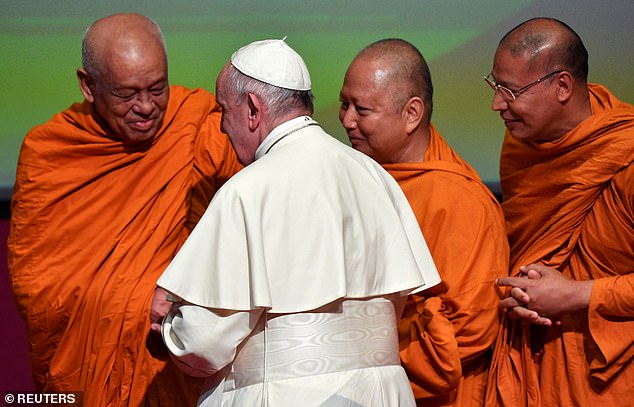 Pope Francis meets religious leaders at the Chulalongkorn University in Bangkok, where he spoke on the second and final full day of his visit 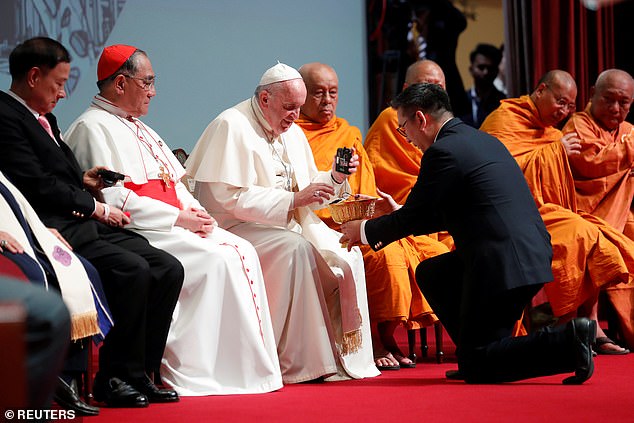 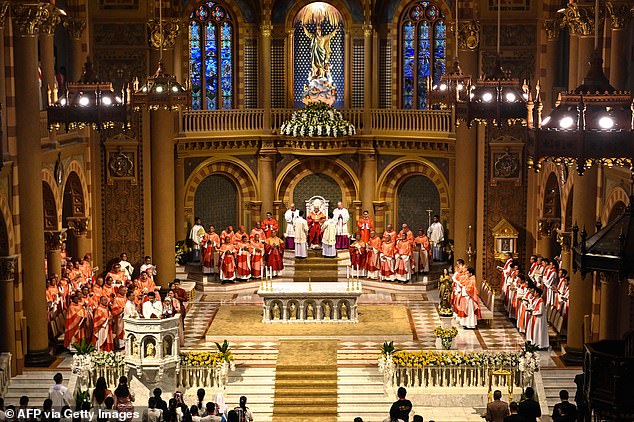 It’s apparently mutual: Francis sends Sivori handwritten letters regularly, and he prepares packages of books for her to read, with envelopes that he addresses himself.

Sivori left Argentina as a young nun in 1966 for Thailand, where she has spent more than five decades ministering to the country’s millions of Catholics.

During Francis’s visit, his first to the country as Pope,  Sivori lamented that he would only visit Bangkok, saying its skyscrapers and luxury hotels were by no means representative of the rest of the country.

The ‘real Thailand’, she said, speaking as a true local, was outside the capital.

Francis set the tone of their time in Bangkok when he descended from his Alitalia charter on Wednesday afternoon.

Before even greeting Surayud Chulanont, the former prime minister and head of King Maha Vajiralongkorn’s Privy Council who was dispatched to the airport to welcome him, Francis broke diplomatic protocol to give Sivori a kiss on each cheek as she waited at the foot of the stairs. 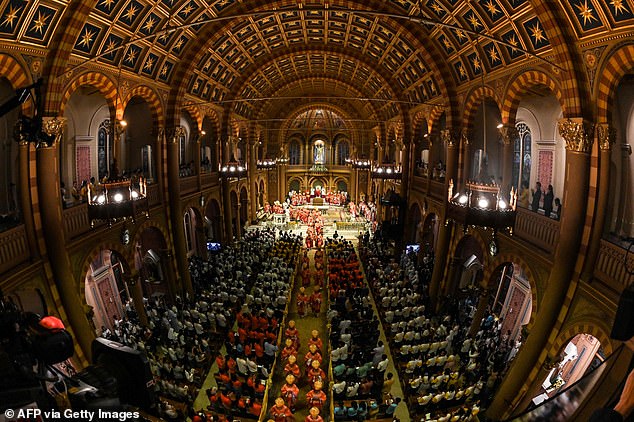 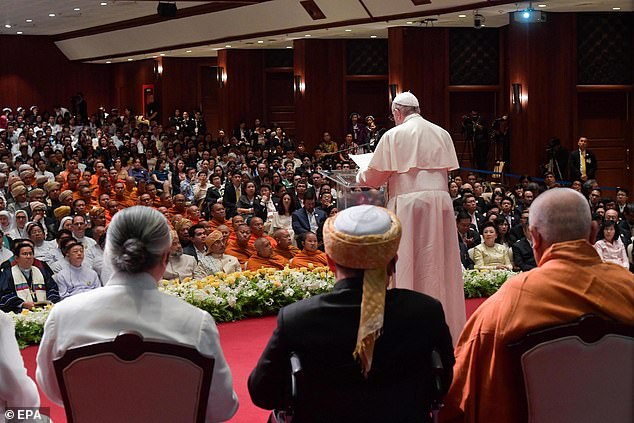 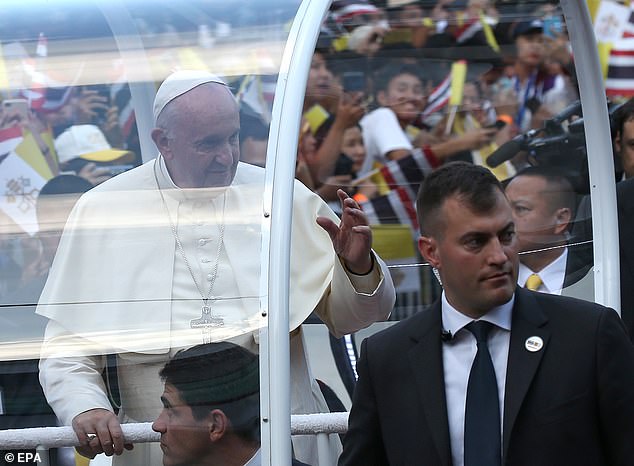 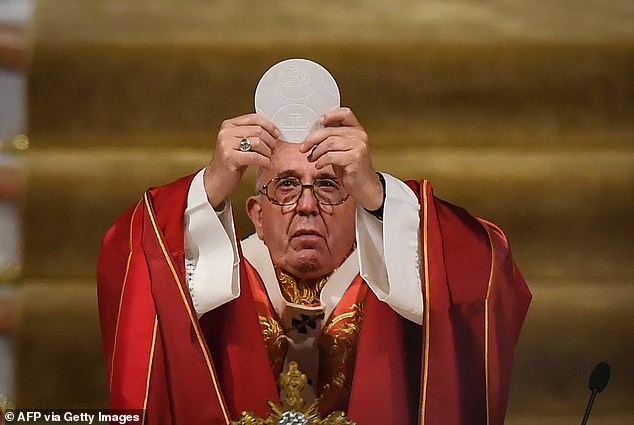 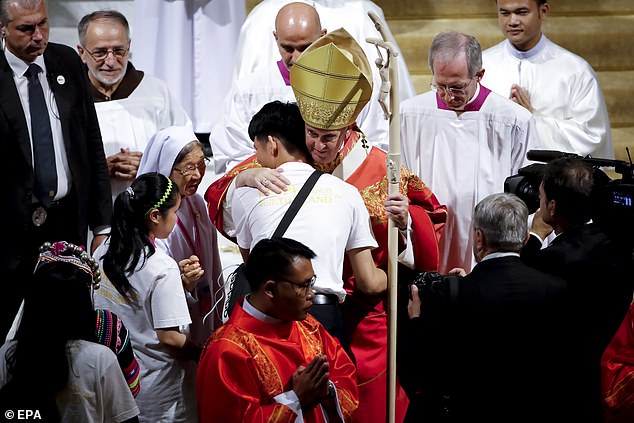 That informality carried through the rest of their time together, with Sivori taking the place of the local bishop in Francis’ car as he went from appointment to appointment. Based on their body language, she was giving him pointers and details at each stop.

The visuals were striking, given Francis has no female advisers and usually has a cleric by his side whispering in his ear.

Francis has long insisted that the Catholic Church is ‘female’ and that women should have a more prominent role in leadership positions.

That he finally let a woman upstage him a bit was remarkable, especially in a country known for the many women and girls who are trafficked and exploited.

Sivori’s starring role peaked Thursday afternoon, when she joined Francis for his private meeting with King Maha Vajiralongkorn and Queen Suthida at the royal palace.

Sivori translated, and at one point even stepped in front of Francis to describe the gifts he had brought the king. Later during their talks, she cheerfully relayed to the pope what the king had said and appeared to even help out the king’s own translator. 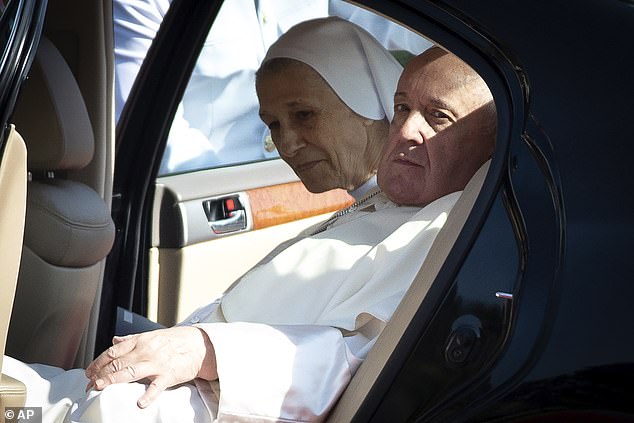 Pope Francis and his cousin Ana Rosa Sivori arrive for a welcome ceremony at the government house in Bangkok, Thailand 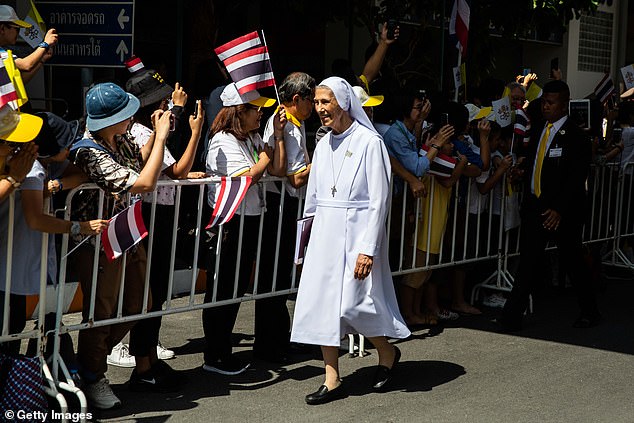 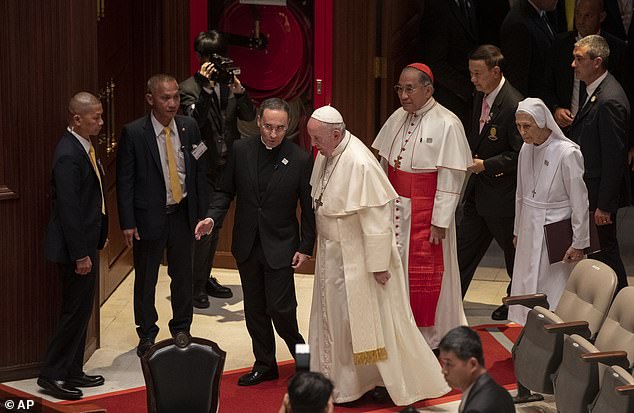 Francis is typically accompanied by an all-male court of advisers for such trips, with Savori (far right) proving a breath of fresh air

At the end of their visit, Francis bade the royals farewell and made his way down the stairs to the waiting car.

Sivori, though, remained at the palace entrance, chatting for nearly a minute with the royal couple while Francis waited for her.

Eventually, she finished her own goodbyes and took her place next to him in the back seat.

Francis appeared to rib her the next day when Sivori was translating his remarks to nuns and priests at St. Peter’s Parish outside Bangkok.

As he tends to do when speaking to a religious audience, Francis deviated from his prepared text and urged the nuns to allow themselves to be ‘surprised’ by the joys and sorrows of their vocation.

Sivori took a few seconds to write down his comments before beginning the translation. The delay prompted Francis to look at her, raise his eyebrows and gesture for her to get on with it.

Their silent exchange Friday drew laughs from the pews and a heartfelt chuckle from the pope, who apologized for not being able to speak directly to his flock.

Spoilers: Who will save Harlow from evil mum's plan in Neighbours?
World News 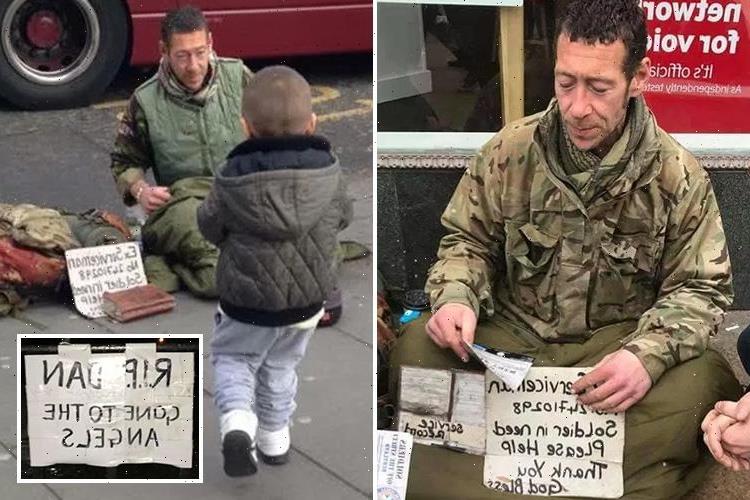 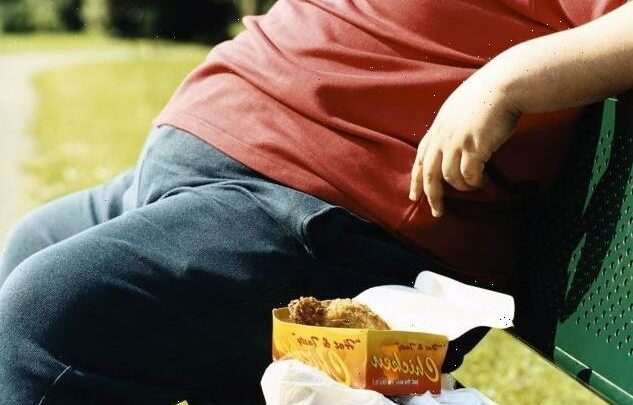