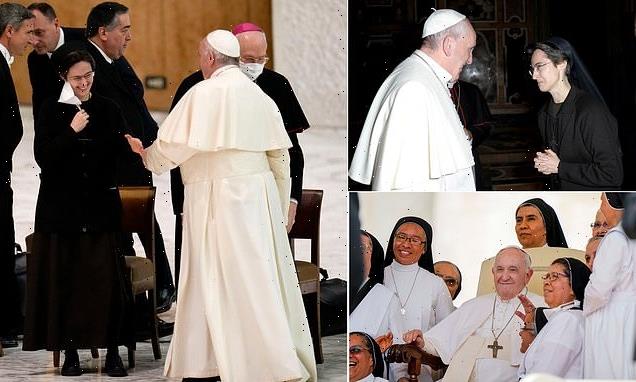 The Pope has been criticised for ‘going woke’ after naming three women to the Dicastery for Bishops – a committee which meets regularly to recommend new bishops who have been put forward by Vatican ambassadors.

The appointment of the three women – nuns Raffaella Petrini and Yvonne Reungoat, and laywoman Maria Lia Zervino (a non-ordained female member of a Church) – is a historical first and comes as Pope Francis seeks to usher in more gender equality within the Church.

But despite the move, women still face serious challenges entering the Catholic Church and cannot be ordained or become bishops, priests or deacons.

The latest decision has been welcomed by more liberal members of the Catholic Church, including the Women’s Ordination Conference (WOC), which advocates for the ordaining of women as deacons, priests and bishops. 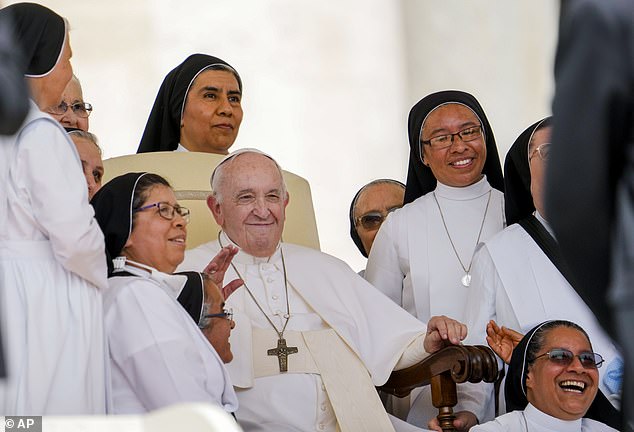 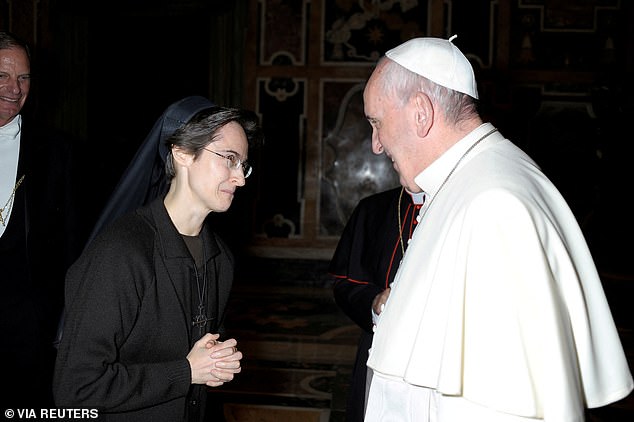 Italian nun Sister Raffaella Petrini, who was the first woman to be appointed as the number two position in the governorship of Vatican City, is greeted by Pope Francis 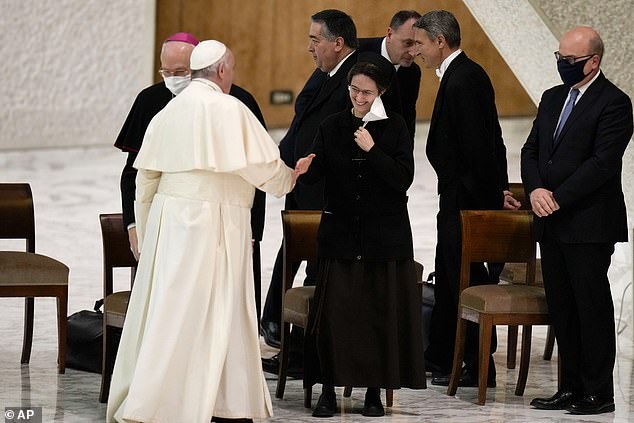 Pope Francis shakes hands with Sister Raffaella Petrini, secretary general of the Vatican’s governorship in 2021 – she is one of three women appointed to the Dicastery for Bishops

This dates back to members’ of the Catholic Church’s belief that because Jesus only selected men as his apostles, only they can lead the Church today.

In a statement, the WOC said it welcomed Francis’ move, while cautioning that appointing more women to Vatican posts ‘cannot alone address the injustices women face in the church’, citing ‘a culture of clericalism and sexism’.

It added: ‘We also note the deep irony that women may now aid in selecting bishops, a role they themselves are prohibited from holding on account of their gender’.

The 85-year-old pope has repeatedly said that women should play greater roles within the Vatican’s hierarchy and has broken centuries of precedent to place women in some key spots previously held by men.

But others have condemned the move as a shift towards wokery – with particularly split reaction on social media.

But others hailed the step forward in women’s rights in the Catholic Church. One social media user said the Pope’s decision is ‘a big boost for the women of our world.’

Another added: ‘This is the kind of religious news I can get behind.’ 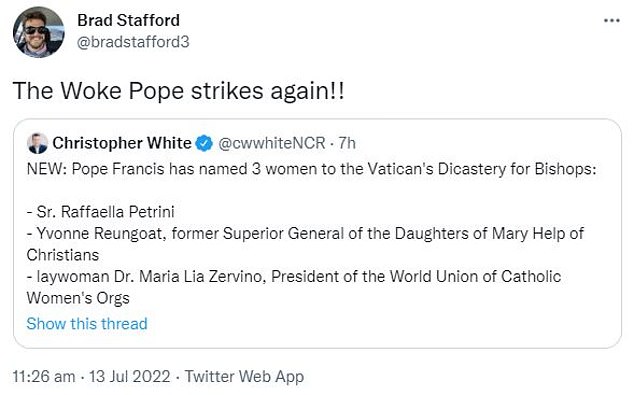 Last year, he issued a decree to allow women to serve as readers at liturgies, altar servers and distributors of communion – but stopped short of saying the change could one day open the door to female priests.

Petrini, a Franciscan nun from Italy, has since November served as the secretary general of the governorate of the Vatican, the first women to ever hold the post.

Reungoat, who is French, is the Mother General Emeritus of the Institute of the Daughters of Mary Help of Christians, a missionary congregation.

In another first, in 2019, Francis appointed Reungoat and another six women to the Congregation for the Institutes of Consecrated Life and the Societies of Apostolic Life, which is responsible for religious orders and congregations of both sexes.

Members had previously included only men – cardinals, bishops and priests.

Laywoman Zervino from Argentina is the president of the World Union of Catholic Women’s Organizations.

Members of the Dicastery for Bishops weigh in on potential candidates for bishops and provide recommendations for the pope.

Pope Francis seems to be trying to provide women with more opportunities in the Church before a potential retirement due to ill health.

Yesterday (July 12) he announced that ‘the door is open’ for retirement ‘if the time is right’ and ‘if I survive.’

He has previously had to cancel several visits, including to Lebanon in May, and was pictured in a wheelchair for the first time earlier this year.

Speaking to Mexican-American broadcaster TelevisaUnivision in his native Spanish, Francis said: ‘The first experience went rather well because [Benedict] a saintly and discreet man, and he handled it well.

The pope added: ‘I think for having taken the first step after so many centuries, he gets 10 points. It’s a marvel.’

He had reportedly planned to retire in 2013 before the conclave, which resulted in him becoming the Pope.

Some cardinals and canon lawyers have long questioned Benedict’s decisions in retirement, including his continuing to wear the white cassock of the papacy and keeping his papal name rather than reverting to Josef Ratzinger.

They say those choices and Benedict’s continued presence in the Vatican created confusion among the faithful and enabled Francis’s traditionalist critics to use Benedict as a rallying point, threatening the unity of the Catholic Church.

Asked whether he would continue to live at the Vatican after retirement, Francis answered ‘surely no’.